In August I reported that Huxley College of the Environment, a part of Western Washington University (WWU) named after renowned biologist Thomas Henry Huxley (Darwin’s Bulldog”), was likely to be renamed. The reason, as I explained earlier:

Like Darwin, Huxley was a “man of his time”, who made some sexist and racist statements that today would be considered intolerable. But Huxley was also a great popularizer of science (he spent man years teaching courses to working people as well as defending Darwinism), an abolitionist, a leader and administrator of British science, and a reformer of schools. Although I’m biased, I’d say his positive contributions of science outweighted his bigoted remarks, and he seems to have had little influence on eugenics, as there was no British movement that led to the practice of eugenics, nor does anyone, as far as I know, cite Huxley in support of eugenics. Eugenics was practiced in Nazi Germany, and not with the excuse of evolution, and to a lesser degree in the U.S., promoted by American scientists.

I predicted that Huxley would be  canceled, and, while it’s not yet a fait accompli, the college is certainly going to be renamed, for Huxley’s moral transgressions—according to modern lights—are not to be forgiven and the authorities have just pronounced judgment.

A new piece at The Panda’s Thumb (click on screenshot below) by Matt Young describes a meeting of the WWU Board of Trustees, and it’s clear from a report of someone who was there (not Young, but an anonymous reporter) that there never was going be real debate about the name change. 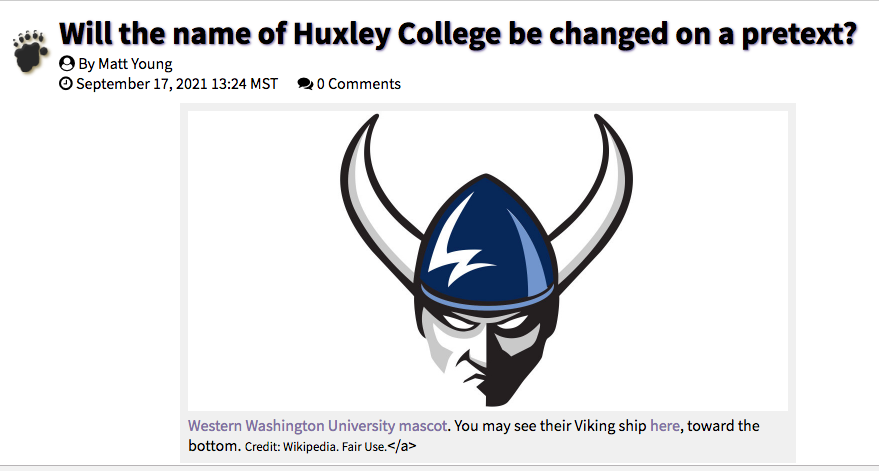 It doesn’t matter that Huxley’s presence in the world improved it, and the education of working people in Britain; a few unseemly remarks by the man in the mid-nineteenth century were sufficient to blot him out of history. There were even falsehoods in the President’s report about Huxley: as I said:

[From the report on the WWU President’s website]: Even though Thomas Huxley made significant contributions in the field of biology, he also had significant contributions to scientific racism. He was a polygenist: someone who is of the belief that all races evolved from different origins instead of coming from one homosapien. [sic] This is not only scientifically disproven, but also a racist mindset, and an argument that one of his “archrivals” at the time called Richard Owen attempted to refute with evidence that we all are the same species that evolved from the same homosapien [sic] thousands of years ago. Huxley won the argument, and it is historian Nicolaas Rupke’s thesis that this argument between Huxley and Owen in which Huxley’s “deeply racist, polygenist viewpoint” won lead to building the scientific racism of the early 20th century.

It’s not true that Huxley was a “polygenist”; like Darwin, he correctly believed in a single evolutionary origin of humans: both were monogenists.) Huxley believed, correctly, that different ethnic groups (then called “races”) evolved in geographic isolation from one another following migration to new places. But, like Darwin, Huxley also thought that whites were on the top of the racial hierarchy.

Didn’t matter; read the report on Young’s website, which convincingly shows that the outcome—no more “Huxley College” name, was determined before the hearing (my emphasis):

The next board member recognized that she was talking from an emotional perspective. She repeated the creationist trope that Huxley advocated a hierarchical theory of race and, because of that, going to a school named after him reminded her of the harm caused by going to a high school in Baltimore named after Roger B. Taney, the Chief Justice of the Supreme Court who wrote the Dred Scott decision. So in short, she compared Huxley’s legacy to Taney’s.

Sensing the overwhelming sentiment, the Board chair than suggested that they needed to start thinking through how they were going to communicate the thought process behind their decision.

So in summary, they totally bought the creationist narrative in the Task Force report. I was embarrassed for them, for WWU, and for my own association with WWU.

Another source observed that, when a committee was appointed,

. . . usually the decision on the path forward had already been made. We [the objectors] were part of the required process.

So another biologist goes down the drain, and as the name gets effaced, the man gets forgotten. I tell you, Darwin is next, and the crowd is already muttering darkly about CD’s racism.

29 thoughts on “Huxley College name canceled for the usual reasons”