The Wall Street Journal reports that “services” for cats, like grooming, boarding, and even spas, are burgeoning these days.  These services were once largely the purview of d*gs.  (Click on screenshot to read):

I get that people are traveling more these days and want to board their cat at a decent place:

“Cats are where it’s at—it’s a niche industry, and there’s a gajillion dog groomers everywhere,” said Ms. Opp, who started out in dog-grooming but went cats-only in 2017.

It is a new moment for an industry traditionally dominated by dogs. Until recently, the grooming and boarding services that were available for cats were sometimes afterthoughts, tacked on to dog-focused operations. Many petsitting companies are now turning away business, even with dog-walking demand still down in many areas. The number of catsitting visits recorded by Time to Pet, a petsitting software company, is 51.2% higher so far in 2022 than in the same period in 2019.

Gabrielle Rivera, 37 years old, of Kingstowne, Va., adopted a stray kitten during the pandemic that she and her husband, Ricky, named Peanut. All was well until the couple booked a ski vacation in Jackson Hole, Wyo., in January.

“We love to travel, but it’s stressful leaving her, and we didn’t want to put her in a metal cage next to dogs barking,” she said, noting that the only option for boarding a previous cat was at a veterinary hospital.

Some of the boarding houses are quite luxurious:

Instead, Ms. Rivera took Peanut to the Happy Cat Hotel and Spa in nearby Alexandria, Va. Part of a franchise offshoot of a hotel started in Windsor, Conn., it is one of many luxury cat hotels that are springing up around the country. Customers can put their cat up in the Weekend in Purris room, with its Eiffel Tower mural, or Nicatgra Falls, which has a barrel and a life preserver. Visits are currently by appointment only. The hotel has been solidly booked since it opened its doors in November 2021. 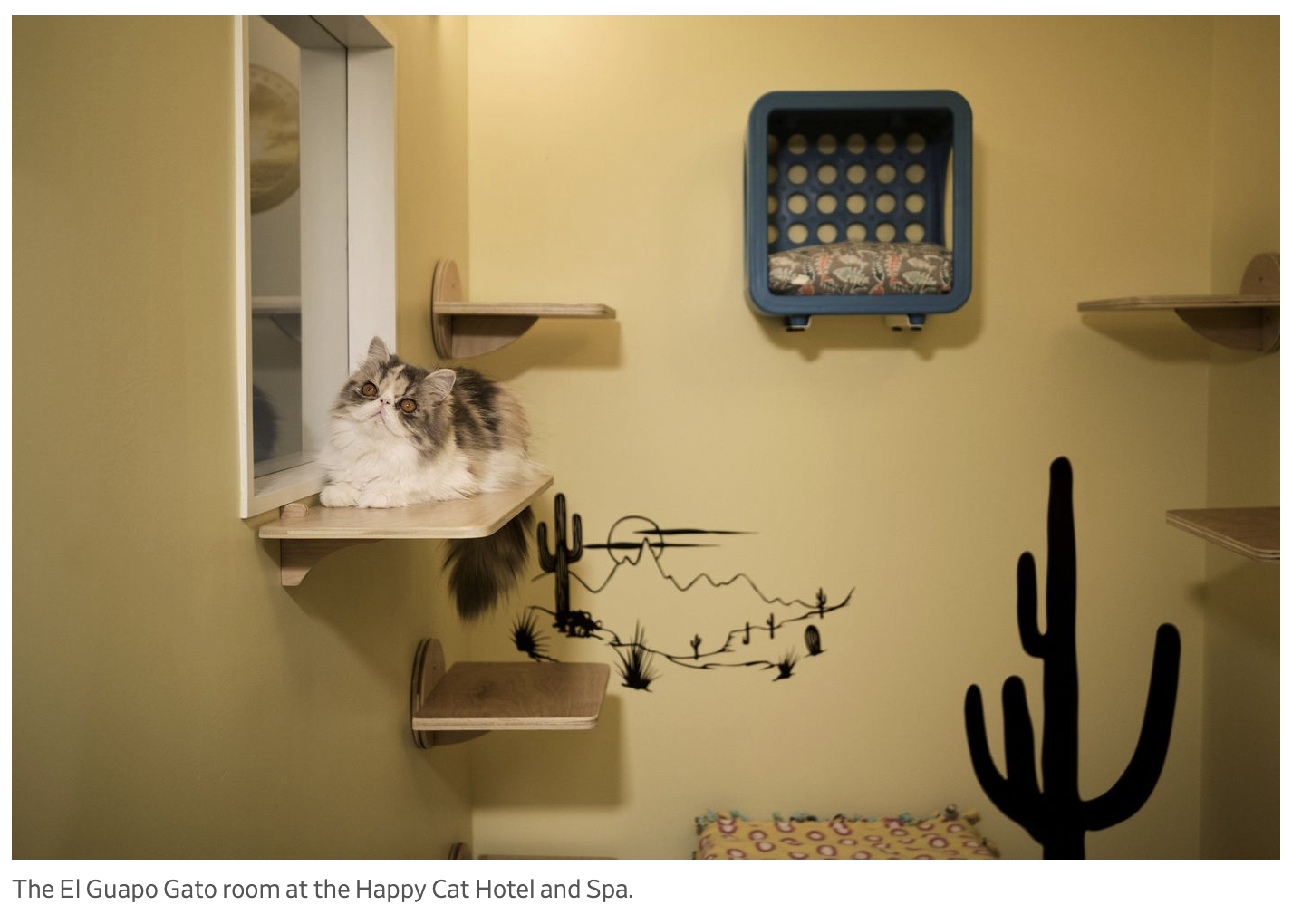 But the uptick in grooming services mystifies me:

Cat owners are starting to learn about other feline-focused services, even ones that question a gospel truth about them: that cats clean themselves.

A kitty is pampered in the spa room at the Happy Cat Hotel and Spa.

Jen Davis, 44, of Robbinsville, N.J., has a cat named Leo who is part-Maine Coon, a long-haired breed. Leo had surgery in 2019 to remove a hairball from his stomach.

After searching the internet, she stumbled upon Cat Naps Cattery, which provides boarding and grooming services. The owner, Lynn Paolillo, also runs a TikTok account demonstrating her techniques. Ms. Davis learned that a lion cut—in which the groomer shaves the cat’s body close to the skin, leaving a bit of mane and some hair on the legs and tail—could help. Leo now gets the cut every three months and hasn’t had trouble since.

So why would the pandemic be associated with an increasing in grooming? Did more people working from home become bonded to their cats? You tell me.

Up on Devon Avenue, where many Indian businesses are located, they’re celebrating the 50th anniversary of the bar Cary’s Lounge, and the fifth of its resident cat Mel. I’ve never even heart of him, though he’s touted as one of Chicago’s most celebrated felines. Click to read the Block Club Site article:

Cary’s Lounge’s most popular regular doesn’t drink. But he does kill rats.

Mel, a middle-aged fluffball with a killer’s instinct, has patrolled Cary’s Lounge, 2251 W. Devon Ave., since the bar’s owner, Peter Valavanis, brought him on in 2017.

“He’s our head of security,” Valavanis said. “And he’s got one good fang left.”

The cat is feared by rodents and beloved by drinkers, Valavanis said. He’s a softie around people, jumping onto stools and into laps for the emotional support needed to down Malört.

Mel has been “good for business,” Valavanis said. Patrons sneak him snacks and sometimes a sip of their drink.

Mel doesn’t drink, but he loves his ‘nip! 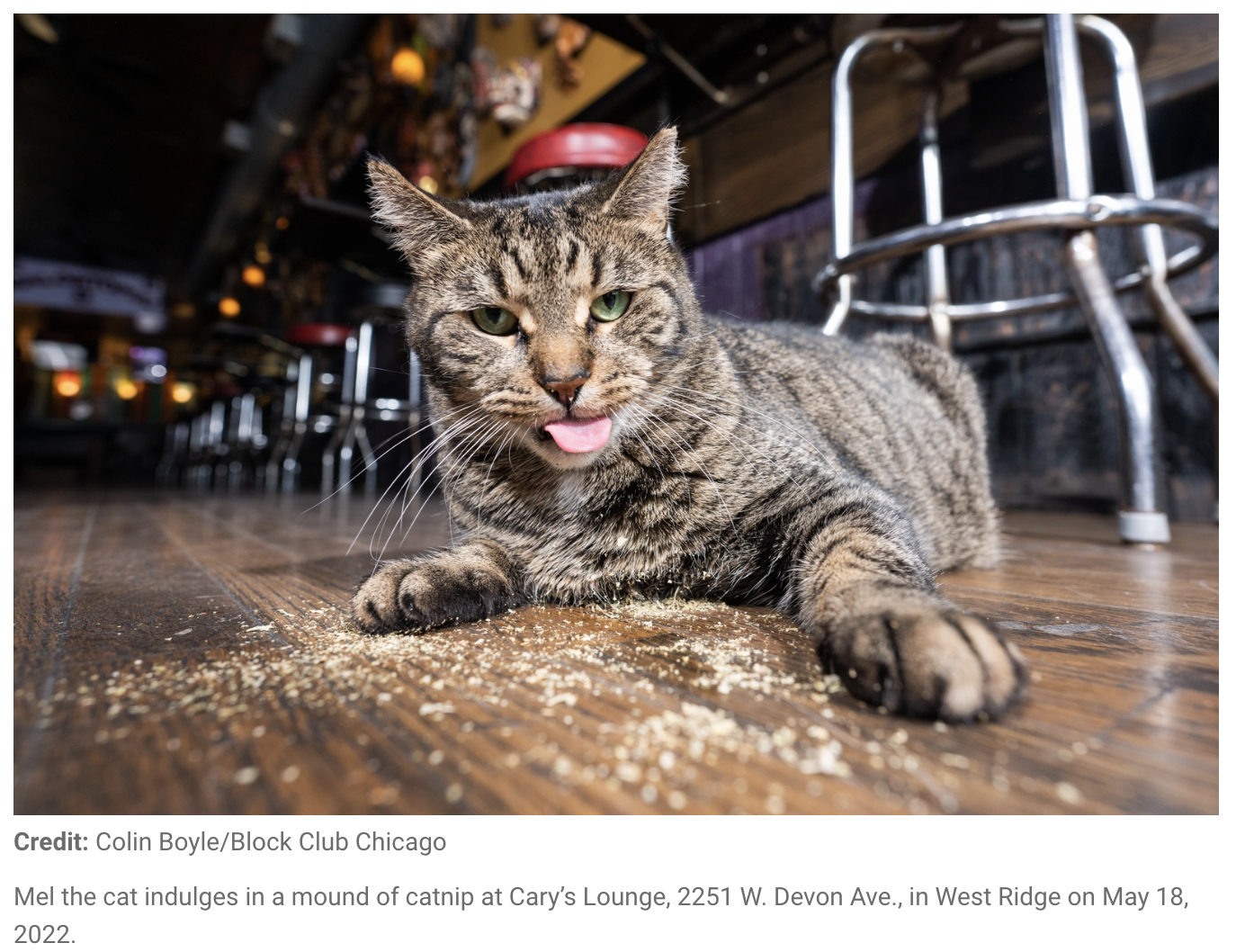 Before Mel’s debut, Cary’s Lounge was dealing with “the fact that Chicago is overrun with rats,” Valavanis said. The rodents were taking territory from the patio and beer garden, he said.

In 2017, the program dispatched three cats to Cary’s Lounge. Valavanis leaned against the bar and asked a regular what he should name them.

They settled on Melvina, Paulina and Lunt.

“It’s an old North Side joke,” Valavanis said. “Name three streets in Chicago that rhyme with a woman’s body part.”

Paulina and Lunt quickly ran away — “but Mel came back,” Valavanis said.

“I think Mel chased them out. He was a little bigger than the other cats,” Valavanis said. “He wanted the bar all to himself.”

At first, Mel was uncongenial and “completely feral,” Valavanis said. “He’d hiss at you.”

Over the years, he warmed up and “started to befriend everybody,” Valavanis said.

“He now hangs out with us on the patio, sits next to you on a barstool, and if he wants something, he’ll just tap you with his paw,” Valavanis said. “I think this guy hit the lottery. He’s well-fed and gets tons of attention.”

If you want to visit Mel and have a Malört (I’ve never had one, but it seems quite popular), be sure you precede your barhopping with a good Indian meal nearby. (I can give recommendations). 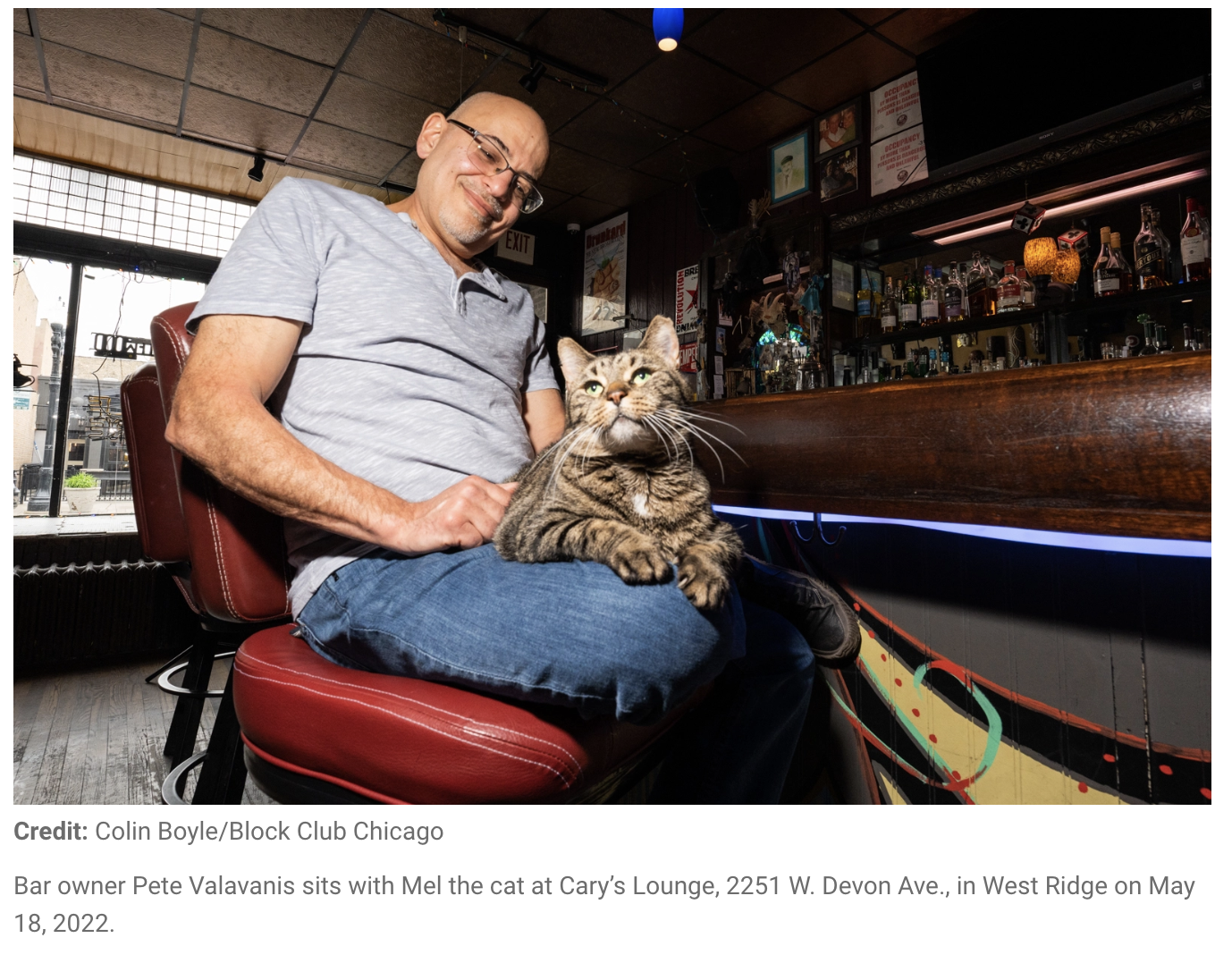 And, as they say at the end of the NBC Evening News after a half hour of describing carnage, “There’s good news tonight!” Today’s good news is the fate of Buddy the cat, recounted by the Philadelphia Inquirer (click to read):

The Philly street cat was the victim of a brutal attack a month ago. Captured on video, it was shocking even by this tough town’s standards. The odds of him making it weren’t good.

Flash forward: Buddy was watching the 76ers trounce the Raptors in the NBA playoffs on a cozy couch with a new kitty friend and two human fosters who adore him. He had toys galore, all the catnip he wanted and a social media following hanging on his every meow.

And thanks to this little black cat who almost lost his life, other injured animals will have a better chance to live theirs.

What happened? Buddy was brutally attacked by a d*g let loose on the cat by two evil boys (they’re facing charges).  Buddy was badly mauled and close to death, but the word went out on social media, and the reaction was predicatable.

The PSPCA was flooded with inquiries about Buddy. Then came the donations — toys, cat treats and money to help. People were pulling for the little black cat — not just from the Philadelphia area or even the United States, but as far away as Europe, Asia and Australia.

And sure enough, Buddy started to pull through.

“This is the biggest outpouring of support we have had for a single animal in the last decade,” PSPCA spokeswoman Gillian Kocher. “This is nothing that comes close to it.”

Buddy could live out all his nine lives and barely make a dent in what’s been sent for him. So the spokeswoman said the PSPCA’s other felines are getting to enjoy his surfeit of toys and treats.

So the PSPCA created the Buddy Fund to help other abused or neglected animals like Elsa, a sweet-tempered, white-and-gray stray who will receive eye surgeries and hopefully find a good home.

He’s done so well that they’re considering putting him up for adoption:

At the PSPCA, there’s a whole bulletin board — Buddy’s Board — filled with the greatest hits of cards, notes and super cute drawings from kids sent to the feline rock star.

Indeed, if the folks at the PSPCA go more than a day or two without an update, his social media followers start clamoring for their Buddy fix.

“Everyone is very invested in this cat,” Ms. Kocher said. “It’s unlike anything I’ve ever seen before. I could post his left ear, and people would go crazy about it.”

A recent video of Buddy playing with a cat toy — that’s all he’s doing — got more than 16,000 views and almost 2,000 likes in just the first day. It’s one of many like it, but people have yet to tire of Buddy’s comeback story. Still.

“This amazing little man blows me away,” one fan tweeted. “What a survivor!”

And apparently Buddy has some foster parents already! Everybody in Philadelphia seems to know his story; I found several video news reports. Here’s one: