Today we have an assortment of diverse photos by Tony Eales from Queensland. His captions and IDs are indented, and please click on the photos to enlarge them.

By the way, if you have good photos you’d like to send me, see the link on the left sidebar of this site, “How to send me wildlife photos.”

I came across this Aseroe rubra Anemone Stinkhorn Fungus the other night. This fungus is relatively common here in eastern Australia but by daytime they have grown into a 100mm high tree-like shape with deep red tentacles and the light brown part collapsed into a dark brown-black goo. They start out as a white egg shape emerging from rotting mulch that then bursts revealing the tentacles. You can see the remains of the egg in the photo. 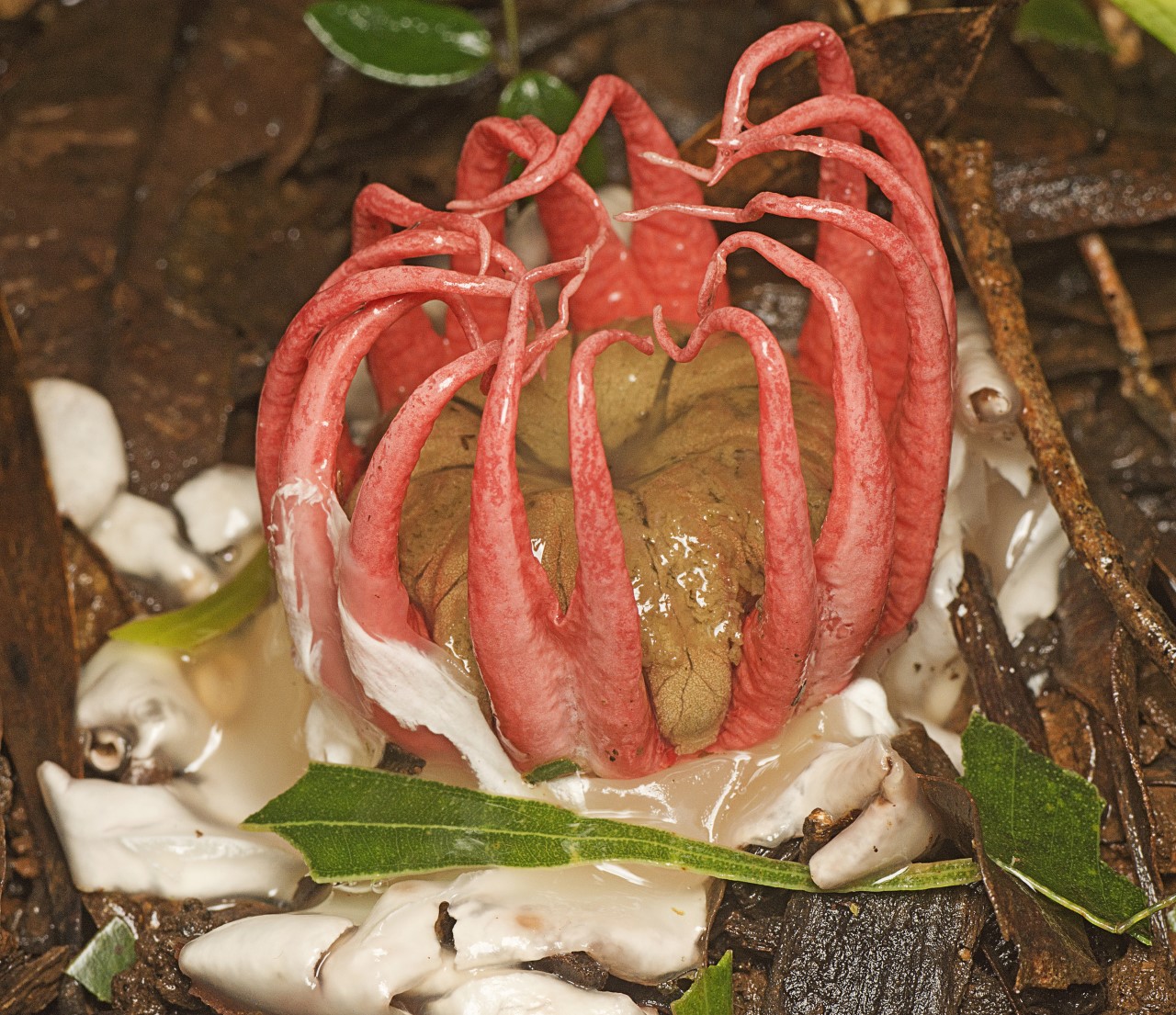 I don’t often photograph vertebrates but I’ve seen a few cool ones of late. This one is  or Red-bellied Black Snake. They are specialists of frogs and smaller reptiles. They are one of the more common snakes in my area but had their numbers reduced by the spread of the introduced Cane Toad (Rhinella marina), which is highly poisonous. Red-bellied Blacks are dangerously venomous but reluctant biters, even so, being very common they are responsible for a few bites every year.

For their size their venom is among the least dangerous of the Australian elapids with the only recorded deaths being early on and of questionable identification.  My most frequent encounters with them is to see the tail rapidly disappearing into the bush. It was good to have a calm subject to photograph. 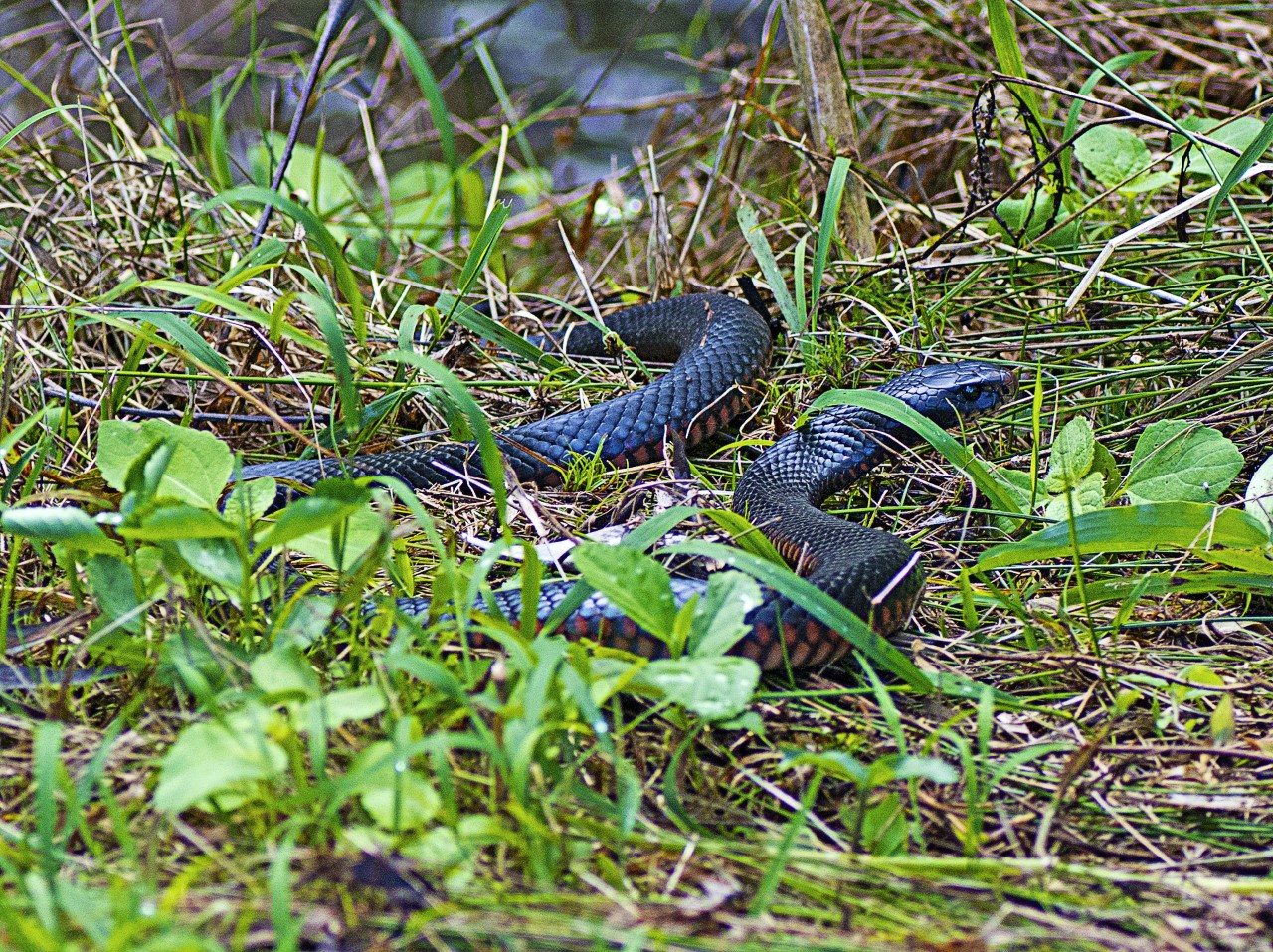 Another lovely snake I found recently is Cacophis squamulosus, the Golden Crowned Snake—a rainforest specialist living in the leaf litter hunting insects and small reptiles. Again I normally see only a flash disappearing into the leaf litter, but this one was out on a fence at night time and I managed a few snaps before it retreated. 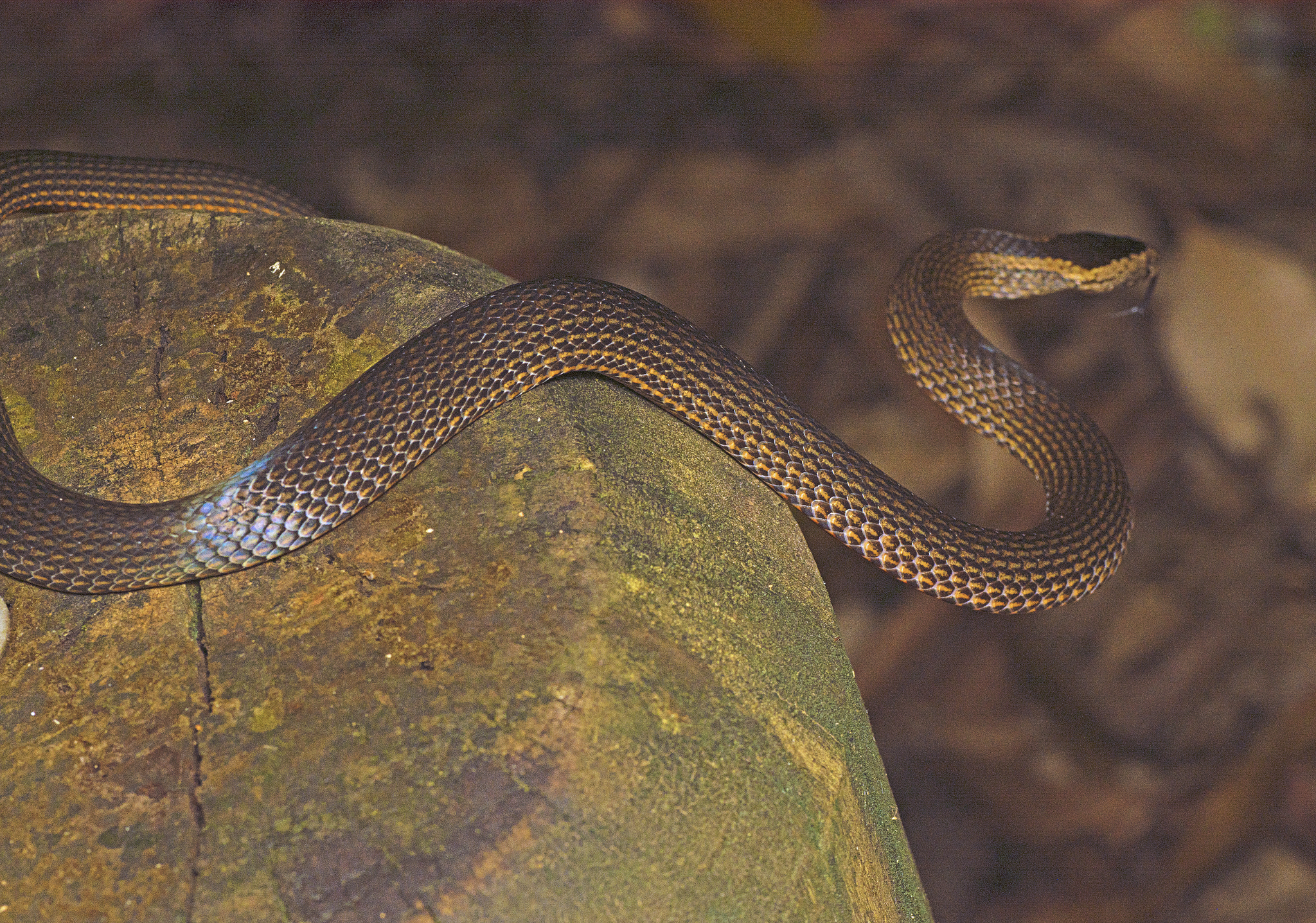 Another exciting find for me was this Lycid beetle larva. The larvae of these beetles are some of the strangest animals I’ve seen. I have no idea of the species and adult lycids are very similar looking to one another so I have a devil of a time getting them to species level as well. 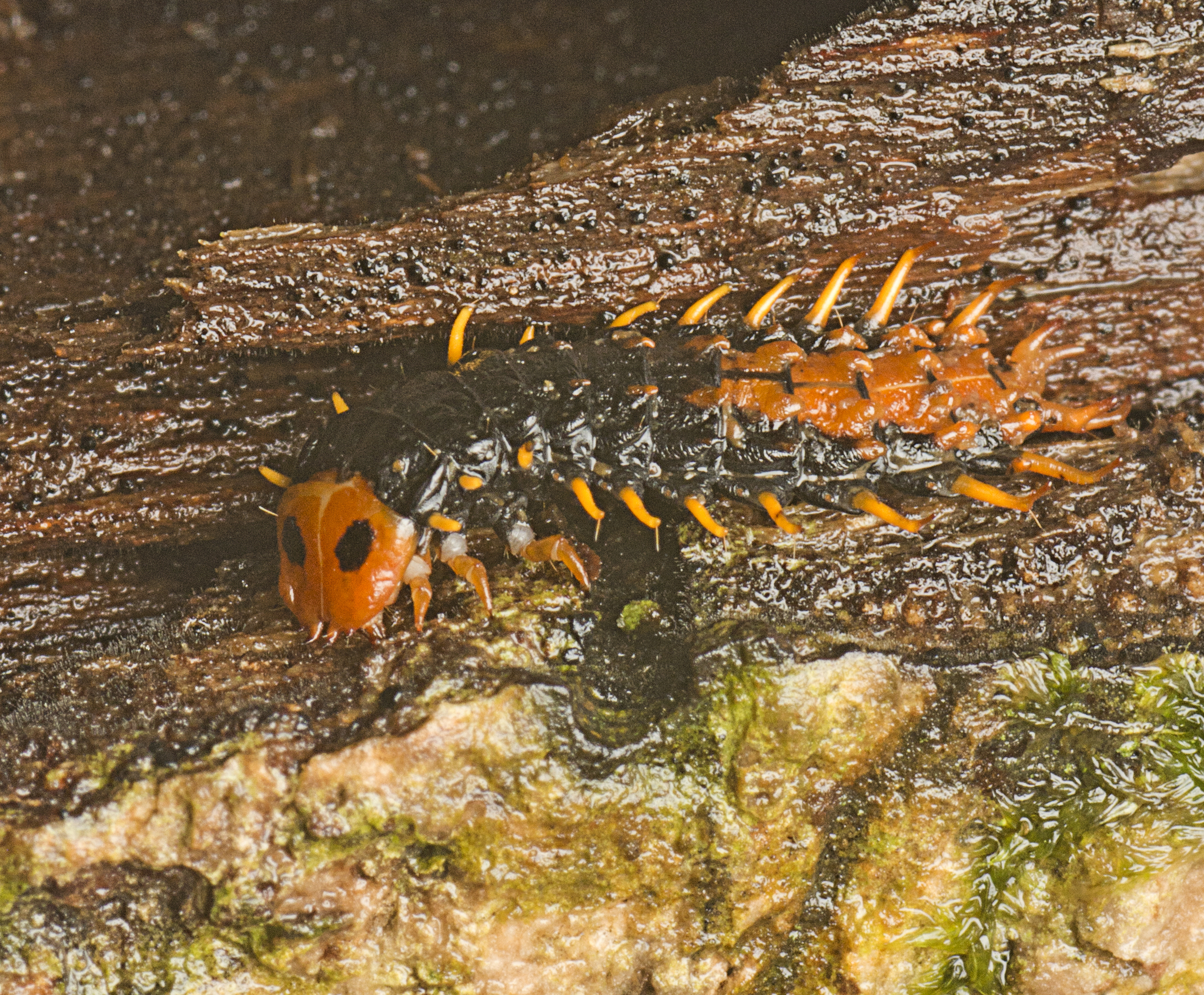 But by far my favourite find recently was the wonderful Ordgarius magnificus AKA the Magnificent Bolas Spider. These are large spiders, the abdomen being about the size of the end of your thumb.  Their eyes are very strange, being perched on top of a thin red tubercule in the middle of their large cephalothorax.

By day they hide in a retreat composed of leaves and twigs lashed together [below] with a few strong web lines. Most people only see their (up to a dozen) 5 cm-long, dangling egg sacs, each containing up to 600 eggs.

Not only are they large and colourful, but their predatory behaviour is extraordinary. They hang at night from a simple web and create a dangling thread with large globs of sticky glue dotted along it. They exude a pheromone that attracts the male moths of one particular species. When they detect the vibrations of an approaching moth they swing the sticky bolus around and around which catches the moth. I am reliably informed that the vibrations from a nearby diesel engine running will also elicit this predatory behaviour. 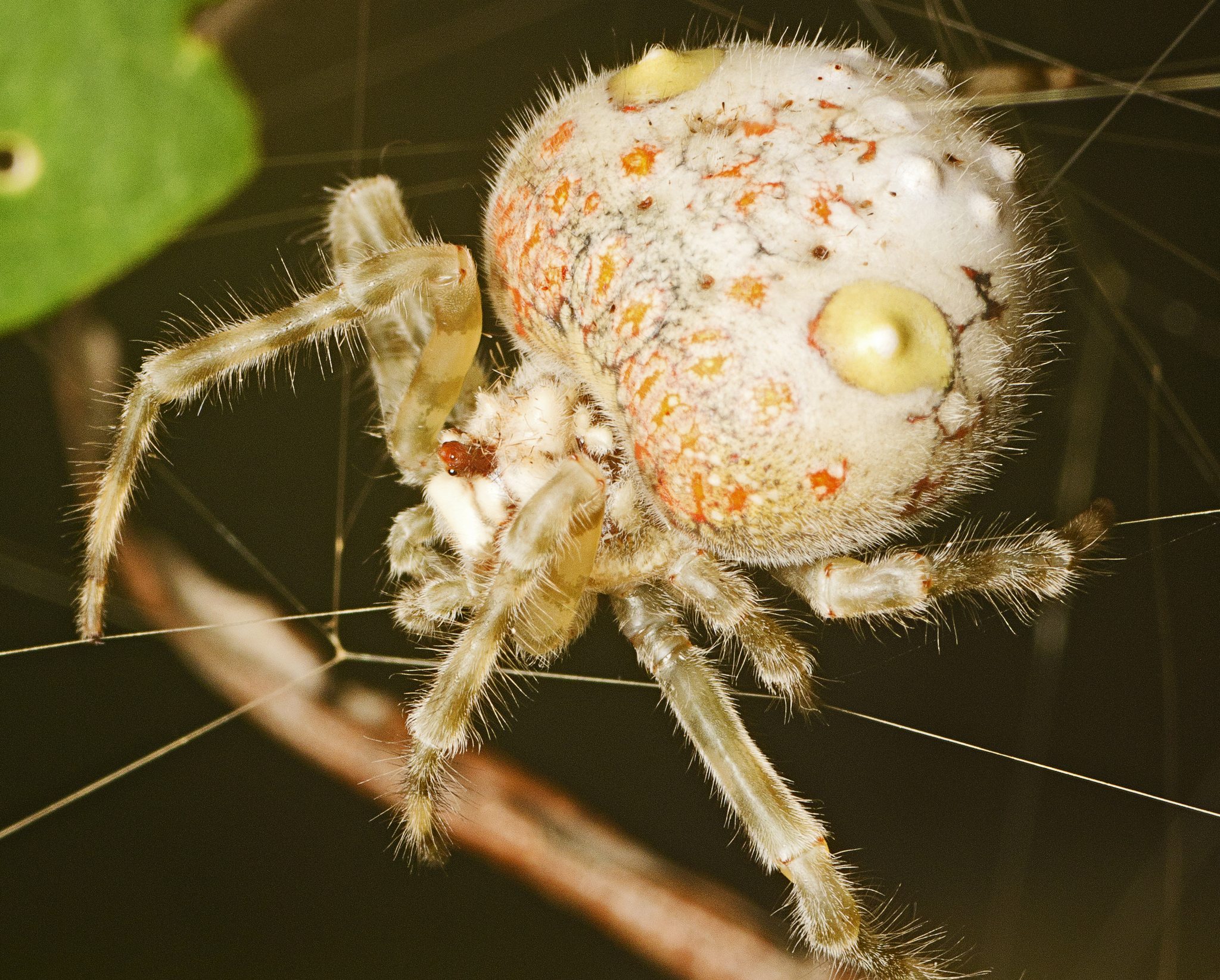 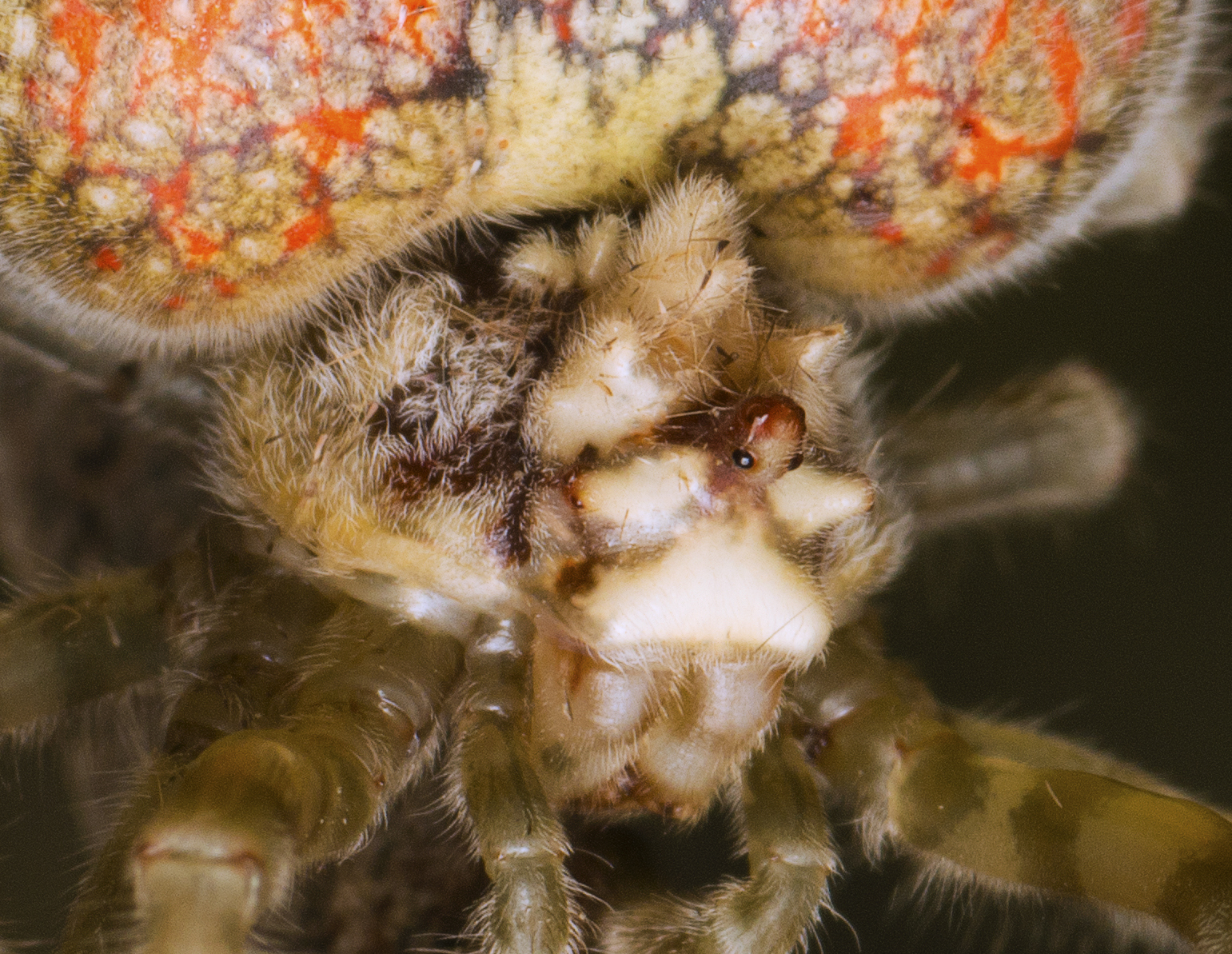 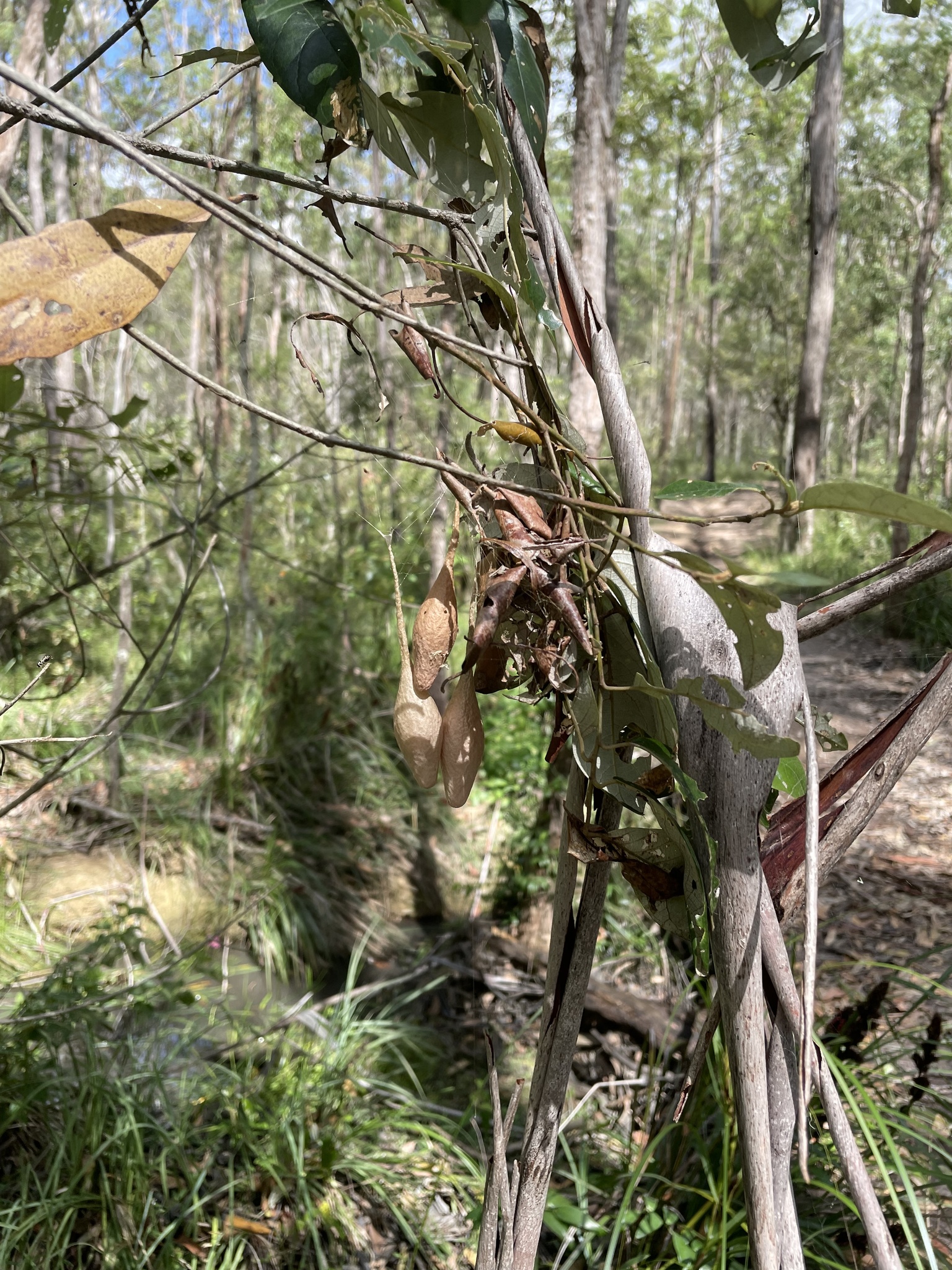 I found this one hunting, but my light disturbed it and it reeled in and reconsumed its bolus unfortunately so I did not get shots of the hunting behaviour. 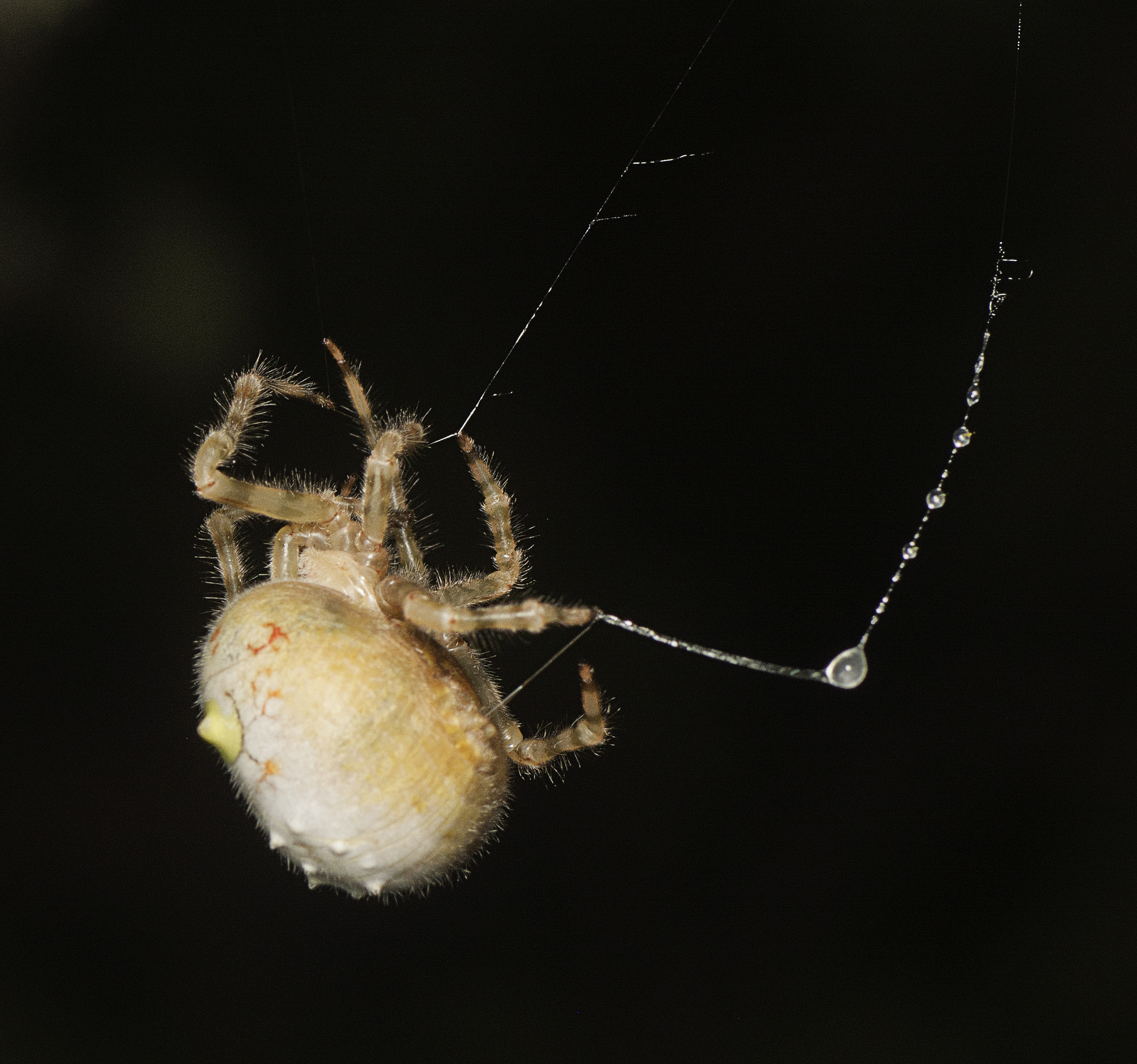