Good morning on a dreary Sunday: May 15, 2022. National Chocolate Chip Day. If you use them, be sure they’re real chocolate and not called “chocolatey chips” (the word “chocolatey indicates, well, let’s use an example from Starbucks:

The FDA’s standard for sweet chocolate (that is, not milk chocolate or bittersweet chocolate, which both have different standards) is that it must contain “not less than 15 percent by weight of chocolate liquor.” Chocolate liquor is chocolatier-speak for liquid cocoa mass (for the booze version, it’s liqueur). Here, now, is the ingredient list for Starbucks’s chocolatey chips:

I am still deeply depressed from yesterday’s duck rescue. Though I still think it was the best course of action, the mother is grieving, and yesterday walked all around the patio for hours, quacking plaintively. That’s just what Dorothy did when Honey ducknapped her entire brood (but then Dorothy renested and ultimately had her own brood).

*Just another day in gun-loving America. Ten people were killed and three injured in a mass shooting in a Buffalo (New York) grocery store. The 18-year old suspect, white, is in custody, and there are suggestions that the wanton killing was an anti-black hate crime. That this kind of thing is regular news shows how sick our country is.  UPDATE: It’s pretty clear the guy had racist motives, as he drove from his white suburb to the black area of Buffalo where the supermarket was. The NYT now says this:

Shortly after Mr. Gendron was captured, a manifesto believed to have been posted online by the gunman emerged, riddled with racist, anti-immigrant views that claimed white Americans were at risk of being replaced by people of color. In the video that appeared to have been captured by the camera affixed to his helmet, an anti-Black racial slur can be seen on the barrel of his weapon.

According to the NBC News last night, the racial slur was the n-word.

*But let’s not forget the other mass shootings in the last few weeks: the AP tallies the carnage from mass shootings (not the usual individual homicides) in the last month excluding the Buffalo attack:  13 dead and dozens injured.  None of these, of course involved guns used in self-defense or to maintain a “well regulated Militia.”

*A good science piece in the NYT: recent in advances in implanting electrodes and microchips in the brains of largely paralyzed people, allowing them to control external devices with their minds. The accomplishment to date, even though this is new science, is remarkable.

*Surprise! Clarence Thomas, who never speaks from the bench, has declared that the leak of a tentative opinion in Roe v. Wade has undermined trust in the Supreme Court:

The leak of a draft opinion regarding abortion has turned the Supreme Court into a place “where you look over your shoulder,” Justice Clarence Thomas said Friday night, and it may have irreparably sundered trust at the institution.

“What happened at the court was tremendously bad,” Thomas said in a conversation with a former law clerk at a conference of conservative and libertarian thinkers in Dallas. “I wonder how long we’re going to have these institutions at the rate we’re undermining them. And then I wonder when they’re gone or destabilized, what we’re going to have as a country.”

It was second time in a week that Thomas has decried declining respect for “institutions”; he made similar remarks at a conference of judges and lawyers last week.

Perhaps the Justice might consider that declining respect for the Court has also rested largely on its explicit politicization, on the lies told by prospective conservative Justices during their hearings, and on the wonky decisions of a conservative court.

*Mo Dowd rarely says anything original in her NYT column these days (her schtick is being snarky), but at least she’s going after the religiousity of the Supreme Court (Dowd was raised Catholic):

During her Supreme Court confirmation hearings, Amy Coney Barrett tried to reassure Democrats who were leery of her role as a “handmaid” in a Christian group called “People of Praise.”

The group has a male-dominated hierarchy and a rigid view of sexuality reflecting conservative gender norms and rejecting openly gay men and women. Men, the group’s decision makers, “headed” their wives.

Justice Barrett said then that she would not impose her personal beliefs on the country. “Judges can’t just wake up one day and say ‘I have an agenda — I like guns, I hate guns, I like abortion, I hate abortion’ — and walk in like a royal queen and impose their will on the world,” she said amicably. “It’s not the law of Amy. It’s the law of the American people.”

Of course Barrett lied, as did Gorsuch and Kavanaugh, and it’s a shame that we can’t do squat about it. Dowd goes on:

Still, this Catholic feels an intense disquiet that Catholic doctrine may be shaping (or misshaping) the freedom and the future of millions of women, and men. There is a corona of religious fervor around the court, a churchly ethos that threatens to turn our whole country upside down.

I come from a family that hews to the Catholic dictates on abortion, and I respect the views of my relatives. But it’s hard for me to watch the church trying to control women’s sexuality after a shocking number of its own priests sexually assaulted children and teenagers for decades, and got recycled into other parishes, as the church covered up the whole scandal. It is also hard to see the church couch its anti-abortion position in the context of caring for women when it continues to keep women in subservient roles in the church.

. . . The explosive nature of Alito’s draft opinion on Roe has brought to the fore how radical the majority on the court is, willing to make women fit with their zealous worldview — a view most Americans reject. It has also shown how radical Republicans are; although after pushing for this result for decades, because it made a good political weapon, they are now pretending it’s no big deal. We will all have to live with the catastrophic results of their zealotry.

*The NYT has a big article on whether being rich makes you happier (yes, but with diminishing returns), and on which endeavors do make people happy. The article says those results are obvious, but not so much to me:

So what do three million happiness data points tell us?

The activities that make people happiest include sex, exercise and gardening. People get a big happiness boost from being with a romantic partner or friends but not from other people, like colleagues, children or acquaintances. Weather plays only a small role in happiness, except that people get a hearty mood boost on extraordinary days, such as those above 75 degrees and sunny. People are consistently happier when they are out in nature, particularly near a body of water, particularly when the scenery is beautiful.

Well, yes, but fulfilling work does, too (apparently most people don’t have that):

Dr. MacKerron and the economist Alex Bryson found that work is the second-most-miserable activity; of 40 activities, only being sick in bed makes people less happy than working. The economist Steven Levitt found that when people are uncertain whether to quit a job, they can be nudged to quit. And when they quit, they report increased happiness months later.

*A world record has been set for the sale of a single photograph (below): Man Ray’s 1924 photograph of the nude back of his girlfriend with violin markings on her back, a photo called Le Violon d’Ingres.” (Photo from Christie’s): 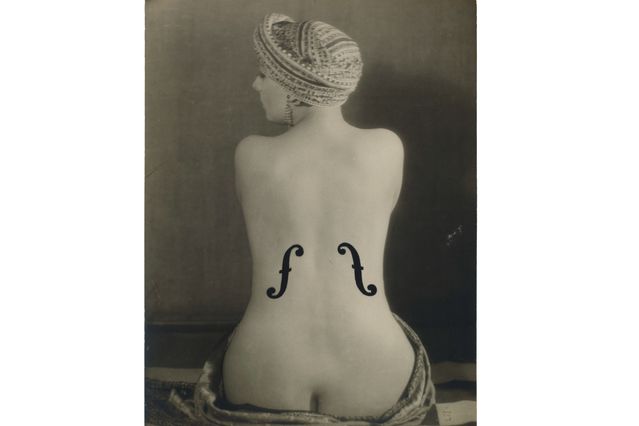 How much did it go for? $12.4 million at Christie’s, well over the $5-$7 million pre-auction estimate and the record for any photograph at auction. I’m not a big fan of this photo. Even though it’s clever; I’d rather have a good Cartier-Bresson hanging on my wall any day. Getting the cleverness takes two seconds, but there are depths and depths in some of Cartier-Bresson’s photos.

Meanwhile in Dobrzyn, Hili is using the hedge as a metaphor for change in the world. 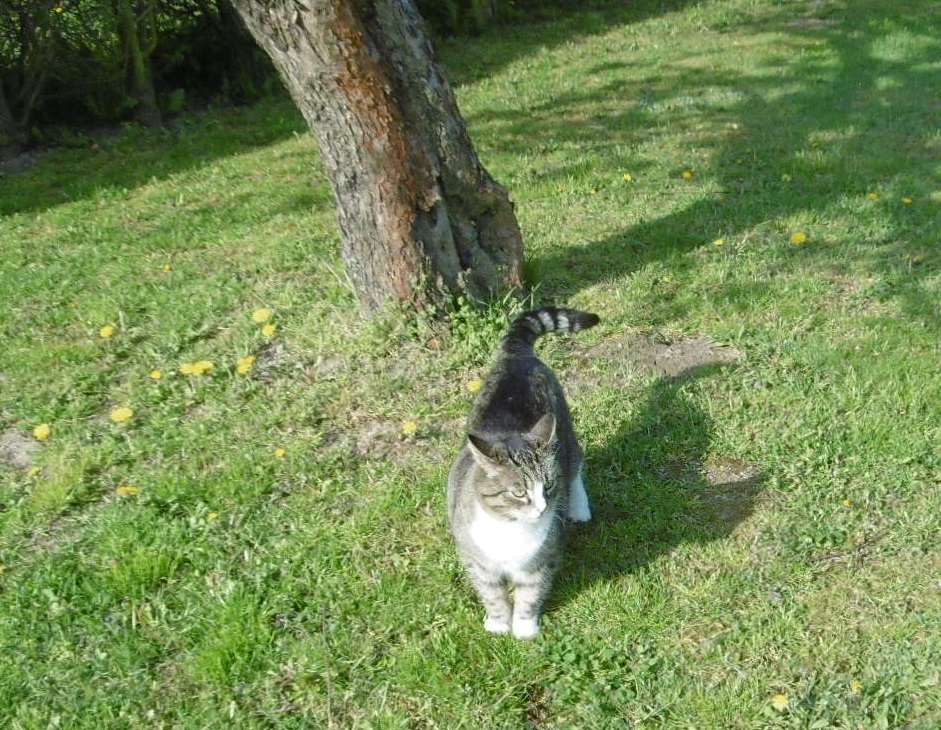 And at Malgorzata and Andrze’s, the wisteria is blooming spectacularly: 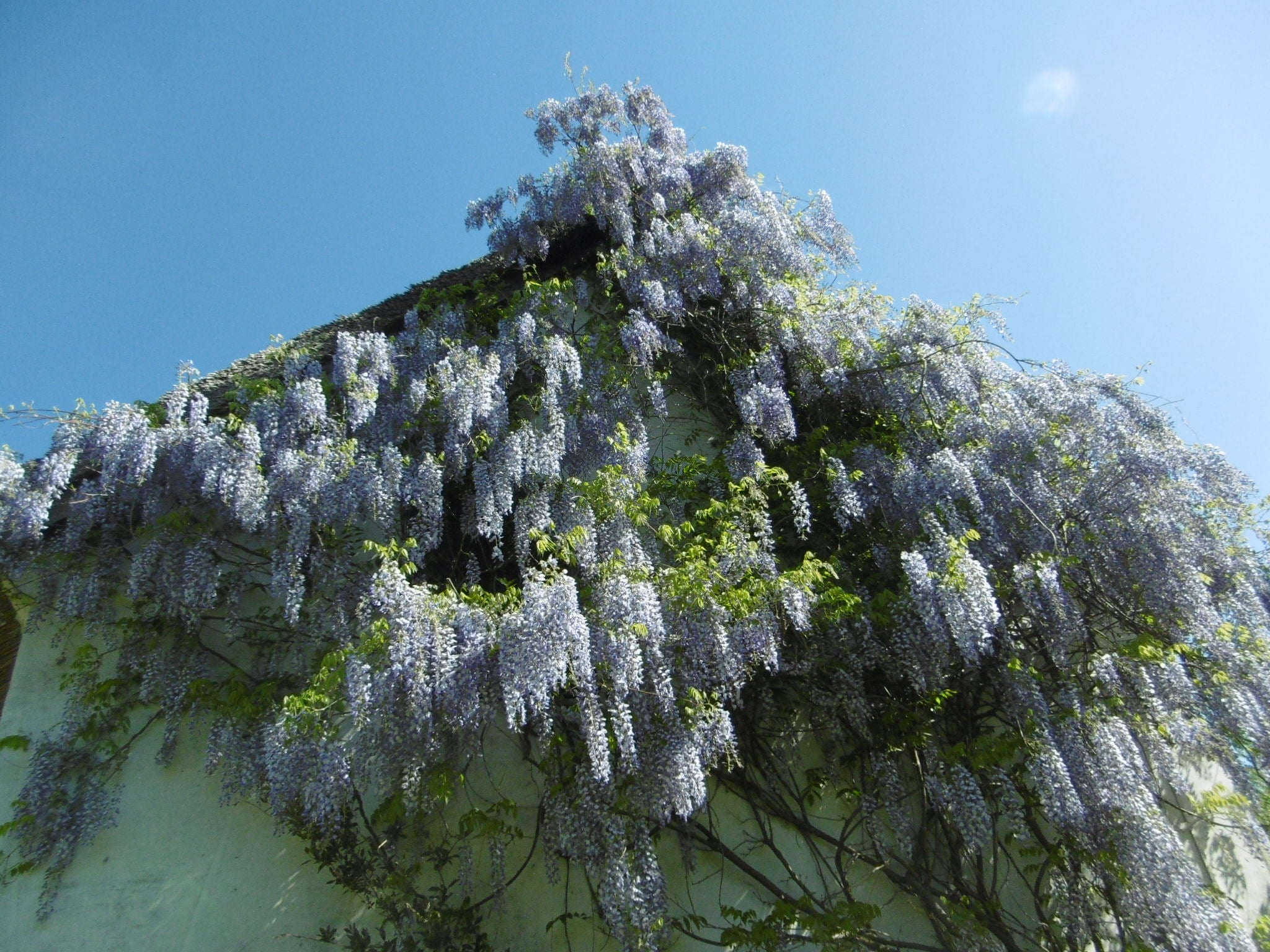 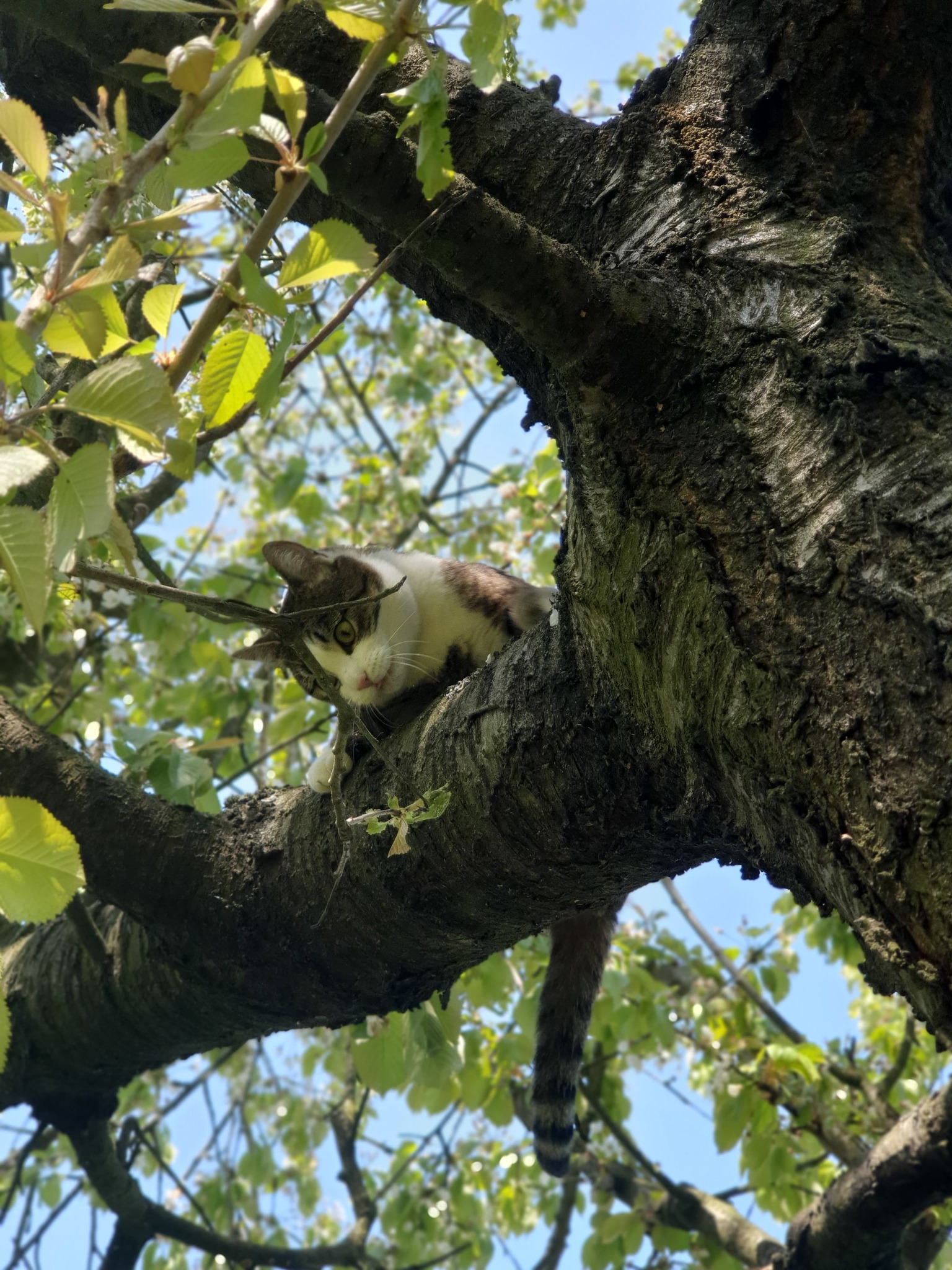 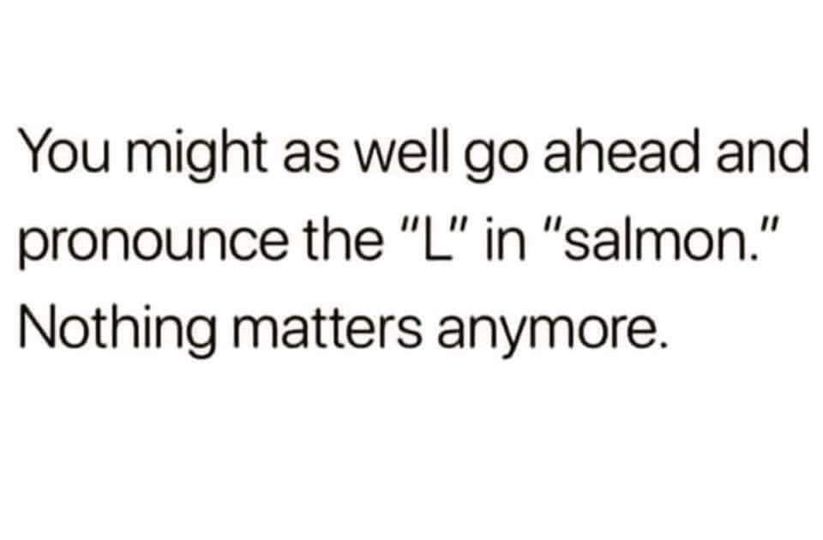 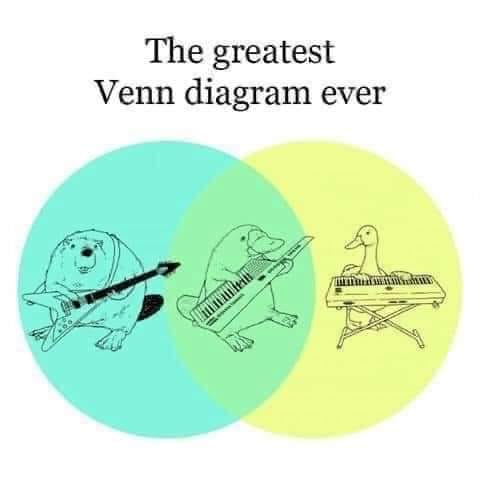 A dog race derailed by a real rabbit running across the track (h/t Stash Krod).

From Simon, who says, correctly, “No cat ever did this”:

Dogs are the best people.🥰🥰

No cat ever did this, either? WHO’S a good boy?

Via Merilee. Look at that face!

A tweet from Paul; the musician is Ukrainian musician and activist Svyatoslav Vakarchuk, the song is called “Everything will be all right”, and the English translation of the lyrics is here.

It is probably the first in history music performance at Chornobyl power station!
Incredible workers – brave and dedicated to their job.
Everything is gonna be alright! #Ukraine 🇺🇦 pic.twitter.com/XLeHPDwrJY

The first rule of Stowaway Club is to secrete yourself on the vessel in a sneaky, clandestine fashion, so that nobody knows you're there. pic.twitter.com/3fEpJhyxqx

She arrived at #Auschwitz on 14 October 1942 in a transport of 1,711 Jews deported from Westerbork. She was among 1,291 of them murdered in gas chambers after the selection. pic.twitter.com/i5BZNpwYVC

Tweets from Matthew: Life is stranger than fiction:

I turned the sound up only to hear the crustacean equivalent of a Rickroll:

I magnified the sound of this shrimp sneezing 27 times. If you hold your phone to your ear on full volume, you should just be able to make it out. You're welcome 🔊🆙 pic.twitter.com/YYiKw2W23F

I wonder what she fed them:

Tonight, I put the food out & then hid behind the fence, just to the left of this scene. The wind was blowing towards me. I kept really still. I was able to watch these less than 2m from me! Heart racing! First time I've ever tried it. Just INCREDIBLE!!! They're tiny!🦊🦊 pic.twitter.com/lfSi4Zx3m0

I don’t get this. Were the Russians stealing it?

Amid the wreckage of Russian attack helicopter is..a washing machine.