Here we have an article in The Independent whose contents I agree with completely (the message by Faiza Saquib, an “assistant audience editor” at the Independent, is that the way Muslim women dress should be completely their choice), but whose title I take issue with. Click to read:

This happens to coincide, as I mentioned yesterday, with the Taliban’s new dictate that all Afghan women outside must wear burqas, and remember that burqas are the full Monty of veiling: 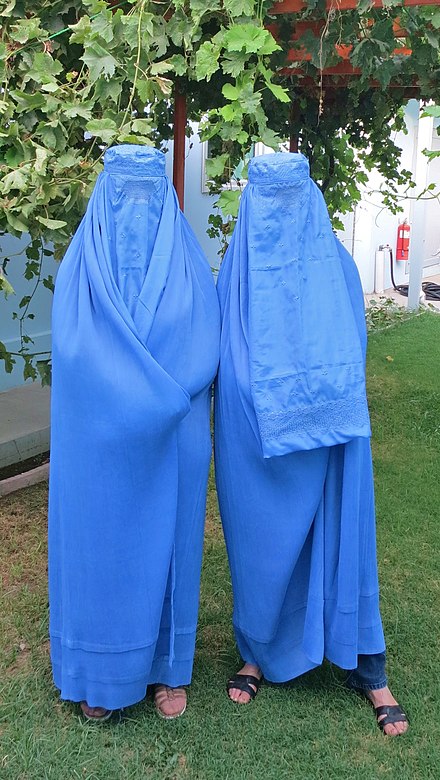 The Taliban have reneged on their promise (when they took over as the U.S. was fleeing) to allow women and girls to go to school, a shameful lie:

I had one hope for today: that Afghan girls walking to school would not be sent back home. But the Taliban did not keep their promise. They will keep finding excuses to stop girls from learning – because they are afraid of educated girls and empowered women. #LetAfghanGirlsLearn

And now they’ve ordered the segregation of men and women (even if they’re married) in restaurants and public parks in Herat, a formerly liberal town in western Afghanistan. I predicted the Taliban would lie to the world about their intentions, pretending a new liberalism, but hey, they’re the Taliban! Their religion dictates (or rather approves of) these practices, and they’re not giving them up to court the worldly West.

Author Saquib is a liberal Muslim, and abhors forced covering:

The women in Afghanistan are now facing stricter laws that take away their basic human rights. Children over the age of 12 can no longer attend school and Saheen’s response to this was: “We never said they are banned, they are under consideration. We want to work out a mechanism.” This is a laughable and degrading response as girls’ and women’s right to education has been taken away from them.

Since the Taliban gained power, they stopped issuing driving licenses to women and now, the burqa – or veil, as they like to call it – is being forced on women in a clear symbol of oppression and misogyny.

As I watched in complete dismay, I couldn’t help but shake my head in disgust. In response to Morgan’s question on why the new law had been laid down, Saheen responded: “Women have been observing hijab for centuries, they’ve been doing it voluntarily.” There is a lot that is wrong about his statement.

Yes, some women may choose to wear the hijab voluntarily on the basis of their faith, however, the decree that has been introduced in Afghanistan clearly shows that there is no choice for women. It’s a forceful law that takes away the “voluntary” element.

With their twisted ideologies stemming from a cultural desire for male dominance, the Taliban’s ignorant attempts to oppress women is all too familiar a narrative for women and girls in Afghanistan. The Taliban takeover saw women’s rights slowly disintegrate – girls were told to go home and not attend schools, they were told to act and be a certain way, and forcefully silenced when protesting against such oppression.

The hijab, niqab and burqa should be a journey in which the woman chooses. It should never be forced on anyone. The same applies to women wanting to cover their hair or body in other faiths.

I agree, of course, though I’ve pointed out several times that the notion of “choice”, meaning “something not forced on anyone by their friends, relatives, or social pressure” is problematic when it comes to hijabs or other forms of covering. When putting hijabs on girls begins at the age of 5 or 6, as it often does, even in the U.S., and the veiling persists through life, in what way is it a choice? (I’m speaking as a determinist here, and have defined “choice” above, meaning “something somebody does not because they’re forced to by others”. )

And social pressure can be strong in Muslim communities. When I spoke at the secular Middle East Technical University in Ankara some years ago, a school where hijabs were banned, I got the rare chance to ask Muslim women undergraduates if they favored that ban. They uniformly replied that yes they did, for if hijabs were allowed, the hijab-wearers would begin to shame the Muslim non-wearers for being “bad Muslims.” I suspect that those who say they wear a hijab simply because they want to and are under no pressure constitute only a fraction of all veiled Muslim women.

But it’s the tile of the piece, which is echoed in the text, that bothers me: “The Taliban and their burqa decree don’t represent Islam.” Immediately you’ll ask yourself, “What does she mean by ‘representing Islam'”? The Taliban is one sect of fundamentalist Islam, and is certainly “Islam” in that sense. Yes, it’s more extremist than many other sects, but not at all way out on the tail of the distribution of repressing women. It can be compared to fundamentalist Christians, like Southern Baptists, who would certainly take umbrage if they were told “they don’t represent Christianity”.

And does “represent” Islam mean “represent what is in the sacred texts” (in this case the Qur’an and the hadith), or represent the behavior that people evince to follow religious custom or dictate? They differ. I don’t believe there’s anything in the Qur’an mandating female genital mutilation, but it’s a common practice in Africa, justified and approved by several sects of Muslims. An article in Slate in 2012 notes the intertwining of Islam and everyday behavior in many Arab states.  Its author, an anonymous user on Quora, stated this:

Answer by an Anonymous User on Quora:

As an Arab American woman raised in a conservative Muslim family, I would say that yes, Islam is a misogynistic religion.

The messages about gender that I received from my parents, extended family, family friends, religious teachers, and so on ranged from subtle to extreme. I was told, among other things, that:

. . . I’d like to reassert my argument that Muslim countries heralded as being more liberal are not following Islam as strictly. Any Muslim country that affords, for example, a woman’s testimony in court the same worth as a man’s testimony, is not actually following the Quran (one male witness equals two female witnesses). The same holds true for countries where polygamy is illegal, and in most cases for any Muslim who affords a female heir the same inheritance as a male heir.

All monotheisms are misogynistic to some extent, but of these Islam and perhaps Orthodox Judaism have codified the misogyny most strongly. Frankly, I don’t care whether it’s from the Bible or Qur’an, an interpretation of that scripture, or customs that have become connected with religion. Covering the body, like genital mutilation, is part of Islam, just as are the customs of inheritance and testimony in court mentioned just above.

Does the author agree with the title about the burqa “not representing Islam”? Apparently so, at least judging from her opening paragraphs:

Islam, a religion of peace, has been tainted by individuals that choose to label their cruelty as “Jihad” and justify the violence they cause in the world. It’s wrong and revolting and absolutely misleading.

Women have the highest status and respect in Islam, something that many men, due to their chosen ignorance, ignore.

The Quran says: “O you who believe! You are forbidden to inherit women against their will, and you should not treat them with harshness.” In fact, in many verses of the Quran, women and men are addressed as  “believing men and women” to highlight the equality of both in regard to their duties, rights and virtues.

This is whitewashing, pure and simple. Yes, as the anonymous Quora author notes, there are liberal Muslim countries where women can go unveiled and have more equality, but I suspect these are the exception.  Women do not have “the highest status and respect in Islam”, save as their value as breeders or as fragile and tempting vessels that must be covered to quench the ardor of men.  And I don’t want to hear “Islam is a religion of peace” any longer. It isn’t, though there were times that it was.

UPDATE:  Sarah Haider informs me that her organization, the Ex-Muslims of North America, have taken over the WikiIslam site and have been revamping its articles.  Here are two sites of interest for this post:

Article on women, with citations: https://wikiislam.net/wiki/Islam_and_Women

There are tons of articles and references on how Islam treats women. Religion may not be the cause of misogyny, but it can certainly codify and perpetuate misogyny. Here Haider discusses the relationship between hijab and Islam, and takes up the issue of “choice”: