I’m always surprised by the high quality of reporting in Tablet, as it doesn’t seem to be a site many people read.  It also has the reputation of being a “Jewish magazine,” which of course puts off some people, but if you look at its articles, you’ll find many of them that don’t have anything to do with Jews or Judaism. One example is the article below. It’s about the increasingly bizarre behavior of Princeton University, which is in the process of “canceling” a professor for some remarks he made about a black student group. Because the remarks were deemed racist by some, the school decided to permanently place Classics Professor Joshua Katz on a list of racist professors and actions—an official site that’s made available to incoming Princeton students as a “teaching document”.

Even if you think Katz’s remarks were unwise (I do, though I don’t see them as racist), they still constitute free speech and an exercise of academic freedom. For the University to demonize Katz for his statement, and to parade him before students as an exemplar of a racist, is a violation of the viewpoint neutrality that Princeton claims it has. Worse, when Katz fought back, supported by many of his fellow professors, Princeton claimed a “right” to add him to the List of Bad People because that was Princeton exercising its freedom of speech. (The President of Princeton also issued a statement officially denouncing Katz.)

Befuddled as Princeton and its president (Christopher Eisgruber) are, they can’t distinguish between free speech and the chilling of speech enacted by making official statements of what is politically unacceptable. That is, they are mixing up the strictures of our University of Chicago’s Principles of Free Speech with our University’s Kalven Report, with the latter mandating that the University and its constituent units make no official statements about ideology, morality, or politics unless they have to do with the functioning and purpose of the university: teaching and learning.  Princeton was in fact the first University to adopt Chicago’s Principles of Free Expression (about 80 universities have now done so). But Princeton doesn’t really understand these principles, and so, as its head goes up its fundament, has decided to make an example of Katz by consigning him to academic perdition. 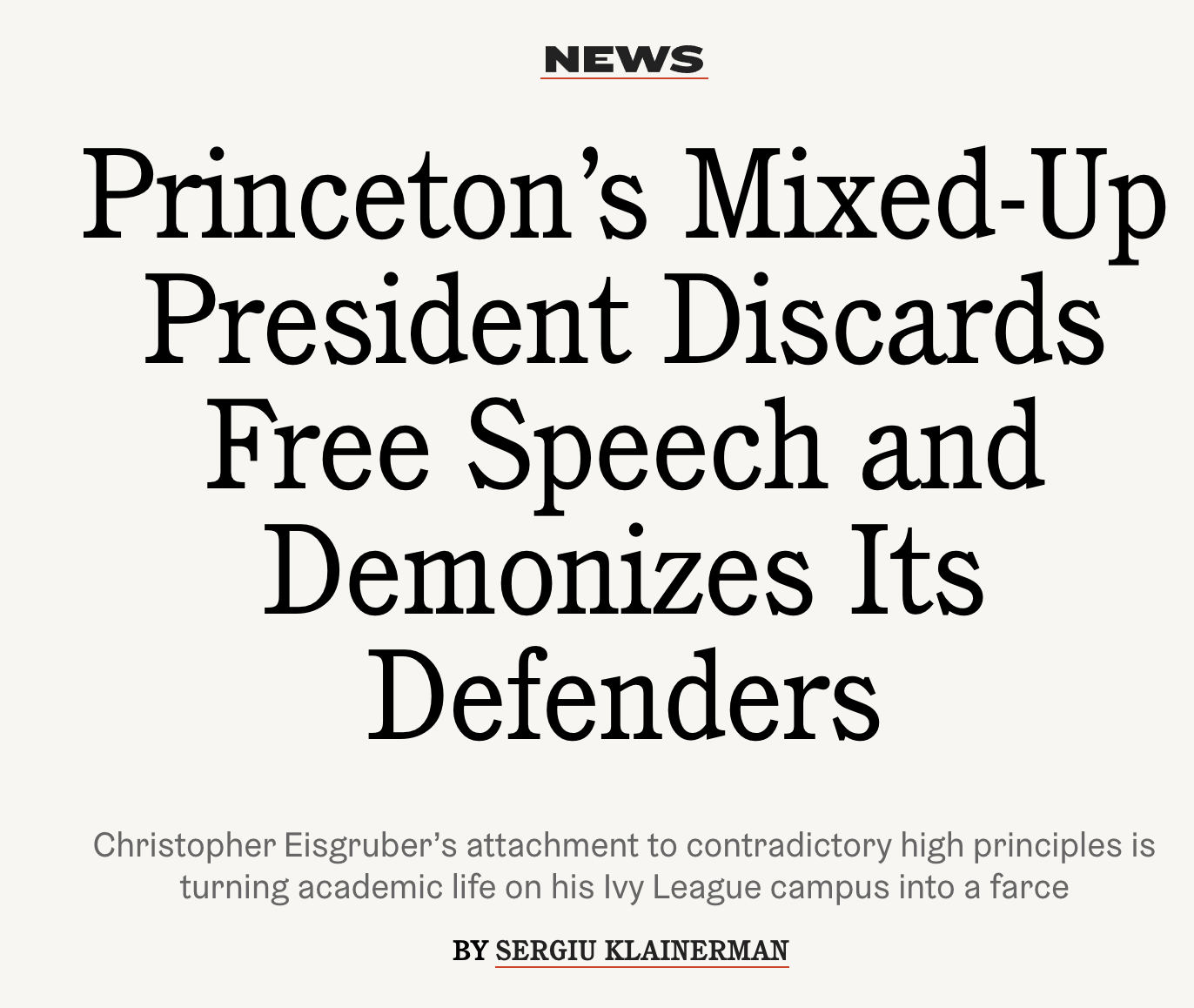 The scenario in short (statements from the Tablet are indented). First, though, I’d ignore Tablet‘s opening screed about what “social justice” is.  To me it’s a confusing discussion and not really relevant to this story except insofar as Katz is accused of being anti-social justice..

1.) Katz made a comment in an article he wrote in Quillette about the “Black Justice League” and about a faculty letter describing pervasive structural racism at Princeton. Here’s part of Katz’s a response to the faculty demands made in their letter (the first quote is from the letter):

“Acknowledge, credit, and incentivize anti-racist student activism. Such acknowledgment should, at a minimum, take the form of reparative action, beginning with a formal public University apology to the members of the Black Justice League and their allies.” The Black Justice League, which was active on campus from 2014 until 2016, was a small local terrorist organization that made life miserable for the many (including the many black students) who did not agree with its members’ demands. Recently I watched an “Instagram Live” of one of its alumni leaders, who—emboldened by recent events and egged on by over 200 supporters who were baying for blood—presided over what was effectively a Struggle Session against one of his former classmates. It was one of the most evil things I have ever witnessed, and I do not say this lightly.

The bit in bold was Katz’s undoing, particularly the phrase “terrorist group”, though the “struggle session” was against a black student and other witnesses say that that usage is accurate.

2.) Princeton put Katz’s statement—missing a crucial bit—on an official document, “To Be Known and Heard“, which recounts the racist background and nature of Princeton. This document is used didactically for new students. Also, via President Eisgruber, Princeton issued statements assailing Katz’s piece in Quillette. Again, this would be a violation of my own University’s Kalven Report: an official damning of a professor for his/her political views.

3.) In the “To Be Known and Heard” document, Princeton left out, in their quote, the parenthetical “(including many black students)”. As Tablet notes,

In order to damage Katz’s reputation as much as possible, the creators of Princeton’s rogues’ gallery of racists, an official document that bears the copyright of the university’s Board of Trustees, omitted the parenthetical words “(including the many black students).” Keep in mind that any student who had doctored a quotation, especially intentionally and with malice, would likely have been suspended.

The gallery omits any mention of Katz’s response when he was asked by The Daily Princetonian to clarify what he meant by “terrorist” and “Struggle Session,” or what he has said about these matters elsewhere. This is what Katz wrote:

… the BJL went after one fellow black student with particular vigor, verbally vilifying her in public at every possible opportunity, calling her all sorts of unsavory epithets and accusing her of “performing white supremacy.” Other students, as well as faculty and administrators, were accused, without evidence, of being “racists” and “white supremacists.”

4.) Katz is thus now a permanent part of an official Princeton “rogue gallery” of racists and racist acts. That gallery would not be allowed at the University of Chicago because it’s an official university document containing arguable contentions as well as implicitly punishing out a university professor for his speech.

The treatment of Katz in the mandatory freshmen orientation has generated a lot of criticism, most notably from the three most prestigious American organizations dedicated to academic freedom: the Foundation for Individual Rights in Education (FIRE), the American Council of Trustees and Alumni (ACTA) and the Academic Freedom Alliance (AFA). (I am a founding member of the AFA, as is Katz.) In his letter to Eisgruber, Keith Whittington, the chair of the academic committee of the AFA and a professor of Politics at Princeton, writes, “We are not aware of any other example of a university systematically denouncing a sitting member of its own faculty in such a way. … We call on the university to refrain from using its administrative resources to target Professor Katz or other members of the faculty in its official activities and programming.”

The AFA letter (pdf here) is especially good. A quote from it:

The university climate would quickly become poisonous and intolerable if administrative units on campus made it a practice to hold up dissenting members of the faculty for ritual condemnation and if the precedent now being set were followed in the future. If the Office of the Vice President for Campus Life uses its administrative position on campus to organize official university programming for the purpose of heaping opprobrium on faculty for expressing disfavored personal political opinions, the risks of chilling speech on campus are severe. The university can hardly create a climate welcoming of heterodox opinions if it creates an administrative apparatus to target the heterodox and stamp them as campus pariahs.

. . . Professors expressing controversial political opinions should expect criticism from members of the campus community, and if those views are unpopular then no doubt such criticism will be loud. However, professors should not have to anticipate that the university administration will adopt those criticisms as its own and place members of its faculty in the pillory as an object lesson for each class of entering students to learn where the boundaries of acceptable speech can be found.

6.) Did Princeton give any credence to any of these letters? It did not. In fact, it accused these organizations of demanding that Princeton violate its own freedom of speech by withholding official criticism of Katz. This is unbelievable:

The university has not yet responded to the accusations—the latter two of which are especially broad—of FIRE, ACTA, or PFS. Eisgruber did, however, reply speedily to Whittington, feigning concern that what the AFA is asking for is contrary to academic freedom and amounts to censorship.

“Are you asking that I censor the website?” Eisgruber inquired. “If so, I find that request” (which is similar to the requests of FIRE, ACTA, and PFS) ”troubling, and I would need to understand better how you reconcile it with the principles of academic freedom and free speech that you champion. I am certain that you would agree that, on a University campus, censorship, including via the compelled removal of information from a website, is a strongly disfavored response to controversial speech.”

In defending the shameful treatment of Katz though such scholastic gymnastics, Princeton’s president seems to be advancing the bizarre notion that somehow the free speech protections enshrined in the university’s rules and regulations extend to administrators in situations where they exercise their official power in order to denounce, harass, and otherwise discredit and threaten individual members of the academic community.

This is a bit like saying that, in denouncing would-be traitors of the Soviet Union on trumped-up charges, Andrey Vyshinsky, the main prosecutor of Stalin’s Moscow trials in the 1930s, was simply exercising his freedom of speech. Or that Joseph McCarthy was merely exercising his right to free speech when he launched his campaign in the 1950s to unearth hidden Communists in Hollywood. Or that the Cultural Revolutionaries in China who denounced their countrymen for imaginary crimes were free speech heroes.

7.) Complaints to other Princeton administrators have met with the same kind of pushback. The Vice Provost for Institutional Equity and Diversity, Michele Minter, argued that the “To Be Known and Heard” website “is not an official university document” (it is; it’s on a princeton.edu site and has been called “teaching material” by President Eisgruber). Further, Minter claims that Katz isn’t a member of a “protected class”, which is irrelevant, though I think he’s probably Jewish.

And so Princeton, while espousing free speech, has created a climate in which a professor who exercises that right is officially damned by the the University and held up to the students as an example of racism. If that’s not punishment for speech, I don’t know what is.

Two comments. First, Princeton’s twisted construal of free speech appears to be a form espoused by one faculty member quoted in the Tablet article (the professor turns out to be Padilla Peralta, whom we’ve met before):

Instead, freshmen were informed by a professor that he “envision[s] a free speech and academic discourse that is flexed to one specific aim, and that aim is the promotion of social justice, and an anti-racist social justice at that.”

And here’s a reaction to the Princeton mishigass by a fellow academic:

[Eisgruber] is a spineless toady to the woke mob that has taken over Princeton.