My dislike of the New York Times is growing daily. Sometimes I wonder if it’s just me becoming more critical and splenetic—either with age or because of the pandemic—but lately I’m pretty sure it’s because the paper itself is becoming terminally woke, with Critical Theory (mostly Critical Race Theory) seeping into every article, and a growing number of features, like the one below, concentrating on race and oppression. It’s not just the topics covered, either—it’s that the way the topics are presented aligns with ideologically correct views. I could spend a whole day writing four or five posts about the mishigas going on at the Times, but I’ll apportion out my spleen in installments.

For example, the following article is about Dan-el Padilla Peralta, a highly regarded Professor of classics at Princeton.  He’s black, was born in the Dominican Republic, and at a young age fell in love with Greek and Roman literature, winding up getting degrees from Princeton, Oxford, and Stanford, then returning to Princeton to teach. At some point in this odyssey (which also involved a hard childhood), he decided that the classical literature he loved and taught was actually being used to undergird racism and white supremacy. In fact, he claims that it’s had that effect since the Enlightenment. He’s now thinking about leaving the field, perhaps after he’s contributing to dismantling it.

It’s manifestly clear that the author of the piece, Rachel Poser (an editor at Harper’s) sympathizes with Padilla’s crusade to ditch the Greeks and Romans. Although she presents critics of his view, most notably Mary Beard of Cambridge University, the article is heavily slanted toward the view that yes, classics have been the pillars of racism, slavery, and white supremacy throughout history. Read for yourself.

One way you can get an idea of where the writer’s sympathies lie is how she ends the article. And here’s Poser’s ending:

On Jan. 6, Padilla turned on the television minutes after the windows of the Capitol were broken. In the crowd, he saw a man in a Greek helmet with TRUMP 2020 painted in white. He saw a man in a T-shirt bearing a golden eagle on a fasces — symbols of Roman law and governance — below the logo 6MWE, which stands for “Six Million Wasn’t Enough,” a reference to the number of Jews murdered in the Holocaust. He saw flags embroidered with the phrase that Leonidas is said to have uttered when the Persian king ordered him to lay down his arms: Molon labe, classical Greek for “Come and take them,” which has become a slogan of American gun rights activists. A week after the riot, Representative Marjorie Taylor Greene, a newly elected Republican from Georgia who has liked posts on social media that call for killing Democrats, wore a mask stitched with the phrase when she voted against impeachment on the House floor.

“There is a certain kind of classicist who will look on what transpired and say, ‘Oh, that’s not us,’” Padilla said when we spoke recently. “What is of interest to me is why is it so imperative for classicists of a certain stripe to make this discursive move? ‘This is not us.’ Systemic racism is foundational to those institutions that incubate classics and classics as a field itself. Can you take stock, can you practice the recognition of the manifold ways in which racism is a part of what you do? What the demands of the current political moment mean?”

Padilla suspects that he will one day need to leave classics and the academy in order to push harder for the changes he wants to see in the world. He has even considered entering politics. “I would never have thought the position I hold now to be attainable to me as a kid,” he said. “But the fact that this is a minor miracle does not displace my deep sense that this is temporary too.” His influence on the field may be more permanent than his presence in it. “Dan-el has galvanized a lot of people,” Rebecca Futo Kennedy, a professor at Denison University, told me. Joel Christensen, the Brandeis professor, now feels that it is his “moral and ethical and intellectual responsibility” to teach classics in a way that exposes its racist history. “Otherwise we’re just participating in propaganda,” he said. Christensen, who is 42, was in graduate school before he had his “crisis of faith,” and he understands the fear that many classicists may experience at being asked to rewrite the narrative of their life’s work. But, he warned, “that future is coming, with or without Dan-el.”

In other words, there’s a straight line from Aristotle to Trump. That is simply nuts. And, in the last sentence above, the “future” means either the end of classics or a revision of how it is taught: presenting it as a highly politicized discipline, taking care at every turn to point out how the ancients promulgated whiteness and bigotry.

Poser’s NYT article presents Padilla’s case in extenso of why the classics are racist, with only a tiny bit of dissent allowed from fellow classicists. In other words, what Poser gives us is not an “objective” piece on the arguments for and against dismantling the teaching of classics, but a lecture by Padilla on why they should be dismantled.  The piece would have been far more interesting had more counterarguments been presented, or had someone made the case for the value of the classics and their misuse to buttress white supremacy.

But that argument fell to Andrew Sullivan in his latest issue of The Weekly Dish. (Click on screenshot below, though it’s a pay site and you can’t read it unless you subscribe. I’d recommend subscribing, as the $50 per year comes out to less than 14 cents per day.)

I thought of going after the article and Padilla’s views myself, but my knowledge of the classics is very scant, and without that one can’t assess his thesis. (I was of course aware that both the ancient Romans and Greeks kept slaves, which I guess are now called “enslaved people,” and that their deep thoughts resulted in part of the freedom they derived from oppressing others. But in those societies slavery was based only minimally on race, and strongly on conquest of foreigners. I have no idea if they even had the concept of “whiteness” as opposed to Athenian or Roman supremacy.) Sullivan, on the other hand, read Latin from when he was a young Catholic lad, and used it to read a ton of classics in the original. He’s also read the translations of Greek classical literature. And, basically, he sees Padilla as full of crap.

If you know classics—and I’m sure many readers here have that knowledge—you should read both pieces and judge for yourself. I won’t repeat all the arguments, but will give just a few quotes from Sullivan about why he sees this NYT article as “deranged” (he’s opposed not only to Padilla’s views, but to the slant of the article). Sullivan’s title, taken from Kundera, is also good: 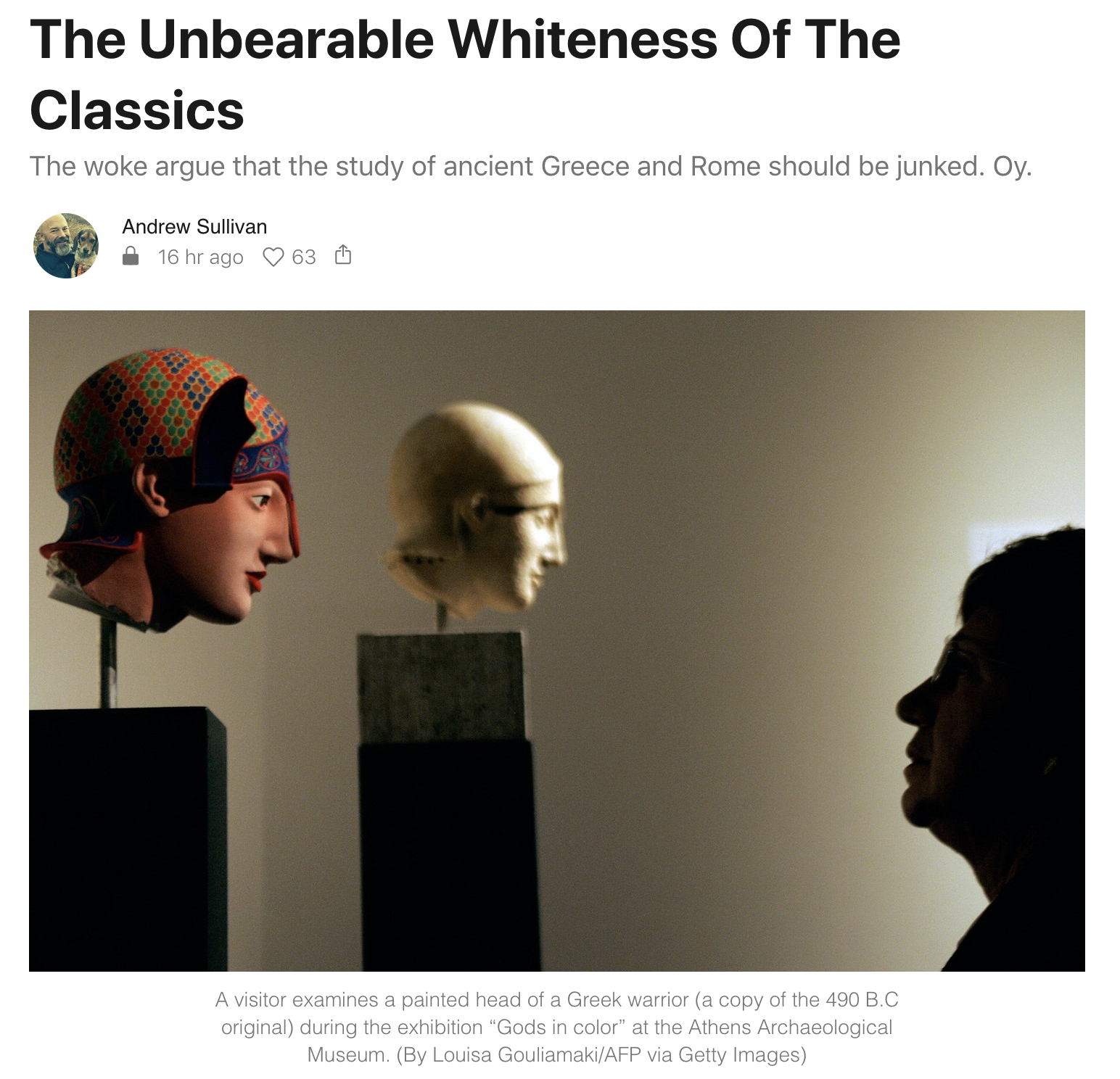 In fact, I’ll give just one long quote from Sullivan, and hope that you can read the rest:

But I read in the New York Times this week, as one does, that, in fact, I was deluding myself. Rather than being liberated, as I felt I was, I was actually being initiated into “white supremacy”. And there is now a broadening movement in the academy to abolish or dismantle the classics because of their iniquitous “whiteness”.

Racial “whiteness” as a concept would, of course, have been all but meaningless to all the ancient writers I grew to love. It’s beyond even an anachronism. How on earth do you reduce the astonishing variety and depth and breadth of texts from an ancient Mediterranean world to a skin color? How do you read Aristotle and conclude that the most salient quality of his genius was that he was “white”?

You can arrive at this deranged conclusion, it seems, in two contrived ways. One is to view the ancient world as some kind of founding proof of the superiority of the “white race”, whatever that means. Imperialists and fascists have always loved this theme; Mussolini was especially fond of it. The very word “fascism” comes from the Roman “fasces”, a bound bundle of logs that was used to signify the authority of the state. In the same NYT piece, we are reminded that the “marchers in Charlottesville, Va., carried flags bearing a symbol of the Roman state; online reactionaries adopted classical pseudonyms; the white-supremacist website Stormfront displayed an image of the Parthenon alongside the tagline ‘Every month is white history month.’”

This dreck is not just bigoted; it’s ahistorical, anachronistic, and reductionist, and it ignores the vast range of classical thought, in which radicals and liberals have found as much intellectual nourishment as conservatives and reactionaries.

The other way to see the classics as a form of “white supremacy” is to embrace critical race theory. Some now argue that the study of ancient Greece and Rome “forms part of the scaffold of white supremacy” that endures to this day. This is because Western democracies can trace many of their formative ideas back to Greece and Rome — and many of these same democracies went on to practice imperialism and even slavery, thousands of years later. Some even justified their brutality with reference to classical texts. This intwining [sic] of the white supremacist assumptions of the Enlightenment with ancient Greece and Rome means the classics are therefore fatally tainted.

I’m sorry, but that’s it? That’s the argument? An entire, diverse, multi-faceted, multicultural civilization that sprawled from Turkey and North Africa to the borders of Scotland — a source of fascination to people of all political persuasions and races over the centuries — cannot be taught because some racists in the past abused its texts? That’s like saying that science should no longer exist because some scientists once practiced eugenics.

In fact, there are those who say that the teaching of evolutionary biology and human genetics should be extensively modified because “some scientists once practiced eugenics”. Although the only kind of “eugenics” promoted in my field these days are suggestions about using CRISPR to snip genetic defects out of human embryos—not an odious idea—some of my colleagues have suggested not only new courses in the history of eugenics (not a bad idea), but also apologies by entire science departments for being tarred with the legacy of eugenics. As Padilla does for classics, they suggest that our field has been used to prop up racism, and is still doing so.  That’s not in fact the case, and as a geneticist I reject the idea that my work is at all besmirched with eugenics and racism because some of my predecessors used genetics to buttress their own racism. And I deny that my area of study, speciation, or the way I analyze my data, have a racist legacy.

But I digress. If you know the classics, at least read Poser’s New York Times article and weigh in below.