According to the NYT article below (click on screenshot), both Christopher Hitchens’s widow Carol Blue-Hitchens, as well as his literary agent Steve Wasserman, are urging their friends and family not to cooperate with Stephen Phillips in his new project: a biography of Christopher Hitchens. 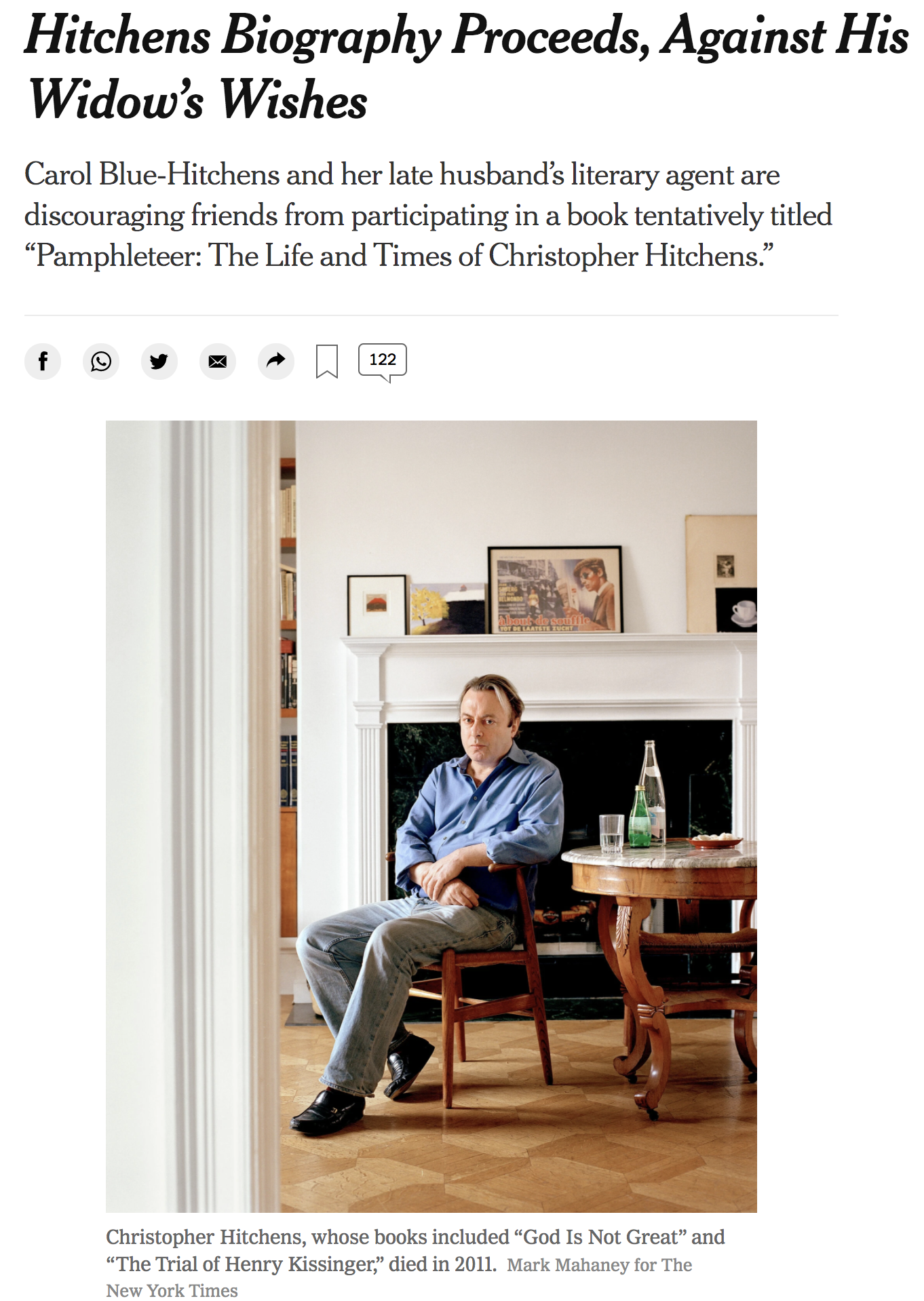 The biography, not yet written but snapped up by W. W. Norton, is tentatively called Pamphleteer: The Life and Times of Christopher Hitchens. Now I object to the title “Pamphleteer”, as Hitchens was far more than that (it’s even a bit pejorative), as well as “The Life and Times” of Christopher Hitchens, for the “Times” are relevant only in terms of the “Life”. In other words, the subtitle is trite.

But I have no objections to people doing biographies of Hitchens. Carol Blue-Hitchens and Wasserman do, however—apparently because they read the book’s prospectus.

“We are aware that a self-appointed would-be biographer, one Stephen Phillips, is embarked on a book on Christopher,” they wrote in an email, which The New York Times reviewed. “We read his proposal and are dismayed by the coarse and reductive approach. We have no confidence in this attempt at the man in full. We are not cooperating and we urge you to refuse all entreaties by Mr. Phillips or his publisher, W.W. Norton.”

It is not uncommon for family members to feel protective of a loved one’s memory, particularly when approached by a biographer. But circulating a letter encouraging others to rebuff the writer has struck some in literary and publishing circles as unusual, especially given Hitchens’s confrontational stance on topics such as atheism, the Iraq war and whether women are funny.

Here’s the email they sent, reproduced in The Nation‘s piece mentioned below: 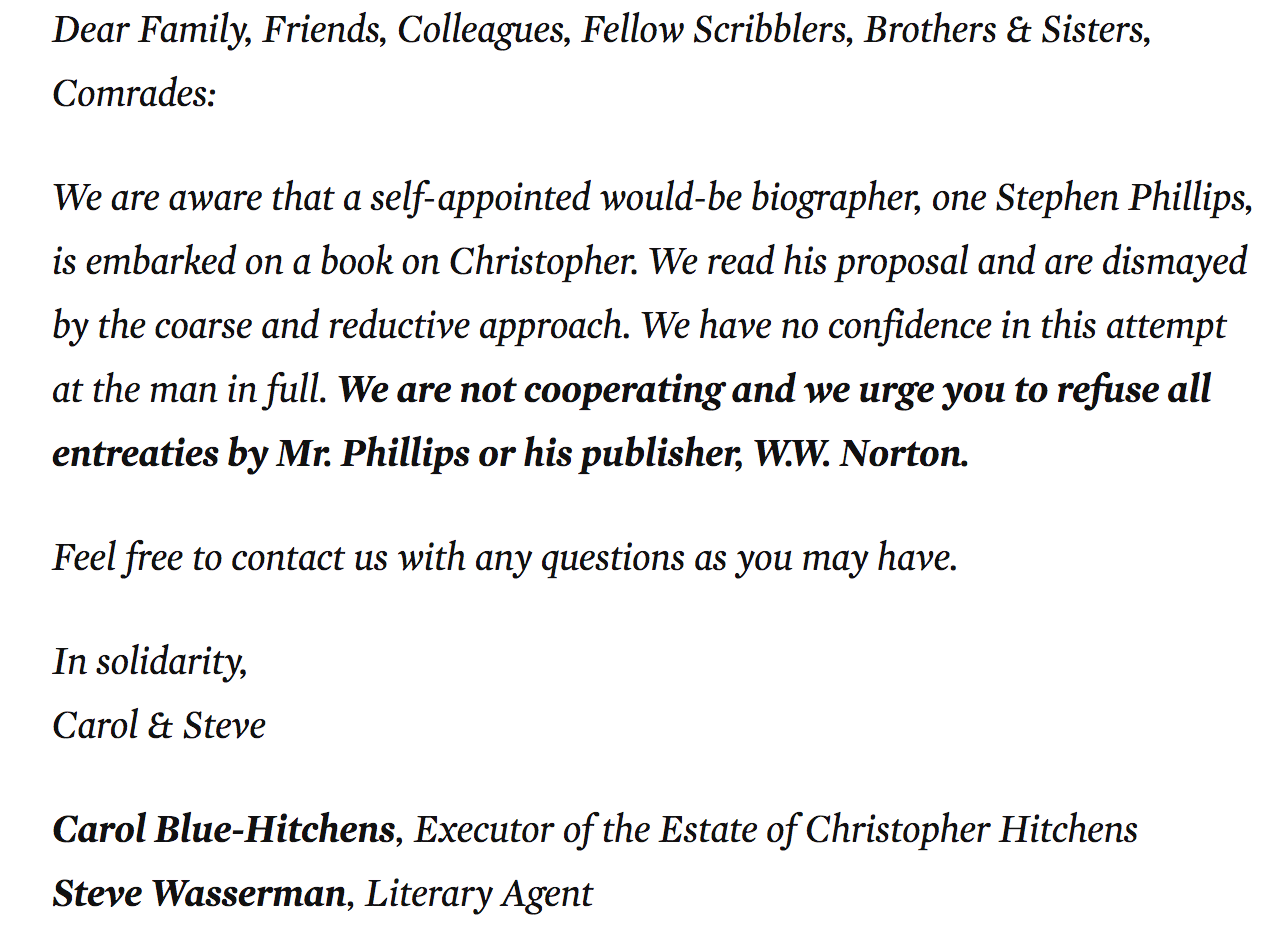 Now I have no way of knowing what was in the prospectus, but it must have struck the two as a some kind of hit job. To me, that notion is substantiated by the reaction of Christopher’s brother:

Peter Hitchens, Christopher’s brother, and a journalist and author himself, said that he has spoken with Phillips for the project. He said that he received an email from Wasserman about it but saw no harm in cooperating.

“My view has been for a long time that there ought to be a biography,” he said. “And as far as I can tell, this guy seems to be a straightforward person with a good record as a writer, intelligent, knowledgeable. Why not him?”

The two brothers didn’t like each other at all (the NYT might have noted that!), and the rush to approbation by Peter makes me suspicious.

Still, there should be a biography. The only existing one, The Faith of Christopher Hitchens: The Restless Soul of the World’s Most Notorious Atheist, by Larry Alex Taunton, which I read, was simply a slimy attempt to claim that Hitchens was growing soft on religion and in fact thinking of converting to Christianity on his deathbed (see here, here, and here for some people’s takes). Perhaps Taunton’s pabulum made Blue-Hitchens and Wasserman wary of yet another attempt at a biography. But Phillips is not Taunton, who was a believer.

Nevertheless, there may be facts about Hitchens that his wife and agent aren’t keen to have come to light. Hitchens had a big-time libido, and had affairs with both men and women; perhaps they’re worried about that. I wouldn’t, but I met the man only once and was never part of his inner circle, much less his family.

Hitchens’s family and agent have every right to object to a proposed biography, and every right to proselytize Hitchens’s friends against cooperating with its author. And those friends can make their own decisions. Still, I like to think that Hitchens, contrarian and dirt-digger that he was (viz., Mother Teresa, Henry Kissinger), would bridle at the desire to have his biography vetted by his family. I’d like to think that he’d say, “Let a hundred biographies flower.” But it’s true that non-cooperation by the people who knew Hitchens best, like Martin Amis, would make for a much poorer biography. One thing is for sure: there won’t be many biographies, so we need assurance that this one will be a decent one, and won’t be written with an agenda.

Over at The Nation, David Nasow argues that there should be no prior restraint like that given in the email above (click on screenshot):

Nasaw admits that any biography will show but a few facets of someone’s life, particularly someone as multifaceted as Hitchens. But he argues that the email above is akin to censorship:

What we can infer from [Blue-Hitchens’s and Wasserman’s] refusal to cooperate with or respond to the “entreaties” of this “self-appointed” biographer and his publisher, W.W. Norton, is that they prefer a biographer who has been appointed, no doubt by them. In publicly discouraging the publication of a book that has not yet been written because they do not think much of the proposal, they are playing a zero-sum game. Either they will succeed in dissuading Phillips and Norton from moving forward or, more likely, the biography will be published and the publicity generated by their opposition will create the sort of buzz that marketers dream of.

The larger question is not whether they are acting judiciously, but whether their actions—and similar ones by other executors—do a disservice to those of us who wish the historical record to be as close to complete, as complex, as stirred-up and muddied as possible.

. . .Blue-Hitchens and Wasserman are well within their rights to refuse to cooperate with this particular biographer, but by reaching out, as they have done, to so wide a universe of individuals who might have something to say on the subject, they are engaging in a sort of preemptive censorship, intended to frighten away not just this one writer but any others who might not, for one reason or another, pass muster with them.

We don’t get any closer to understanding a life and its times—which are our times—by restricting access to those who might wish to examine and interpret them.

Now I don’t infer, as does Nasaw, that the family and agent want an “approved” biography.  Before I’d conclude that, I’d like to see the book’s prospectus. And I can’t find out much about what Phillips himself has written.  To me, the whole tempest rests on what was in the proposal that put off Blue-Hitchens and Wasserman. And we’ll never know about that.