We are winding up our voyage by heading to the port city of Valparaiso, an hour’s drive from the Santiago airport—the gateway to Chicago.There’s a palpable sense among passengers that the best part of the trip is over, which is true. Granted, we still have a few places to visit, including Puerto Natalas (and if I’d never seen Torres del Paine National Park , several hours from the town, I’d be juiced). But I’ve seen it before and it’s a long all day trip., mostly sitting on a bus. I signed up instead for a free tour of the region.

And I just discovered that that tour includes a visit to Cueva del Milodón Natural Monument, a “sacred” site for evolutionary biologists. For it was in these caves—in particular in the 200-foot-deep Milodón Cave—where the remains of Milodon darwinii, an extinct giant ground sloth, were first found.

Darwin found similar fossils of this behemoth in Argentina, and the animal now bears his name. It was the resemblance between the remains of the giant extinct sloth and those of the smaller and still extant sloths that helped Darwin realize that fossils are often found in the same are as similar living species. That, in turn, implied that the former were ancestors of the latter. Mylodon, then, is one piece of the puzzle that led to Darwin’s theory of evolution.

However, as far as I can see, Darwin’s fossils came from Argentina, not Chile. Here’s a photo of the mouth of that cave taken from Wikipedia: 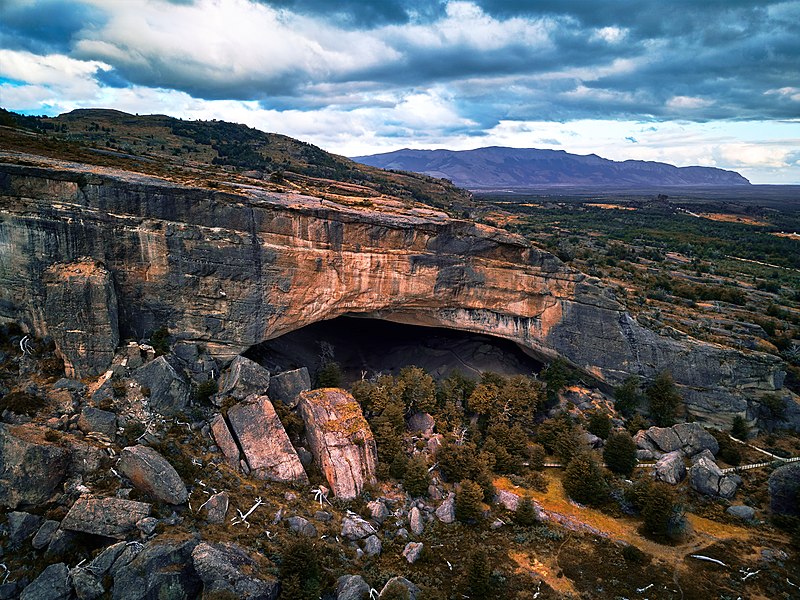 But for the past several days the scenery has been one of rain, clouds, and hidden fjords, with not a penguin in view. It’s too foggy to see much, and people are playing bridge in the bar. Here are a few photos from the past couple of days.

As we approached Cape Horn yesterday afternoon, I heard loud rock music blaring from outside my cabin balcony. “What is that?” I asked myself. Going outside, I saw that a Chilean boat had transferred a pilot to our ship. Chilean law mandates that a Chilean pilot be used to steer the ship not just around Cape Horn, but through the Beagle Channel, where we traveled last night. Here is “dropping the pilot”. 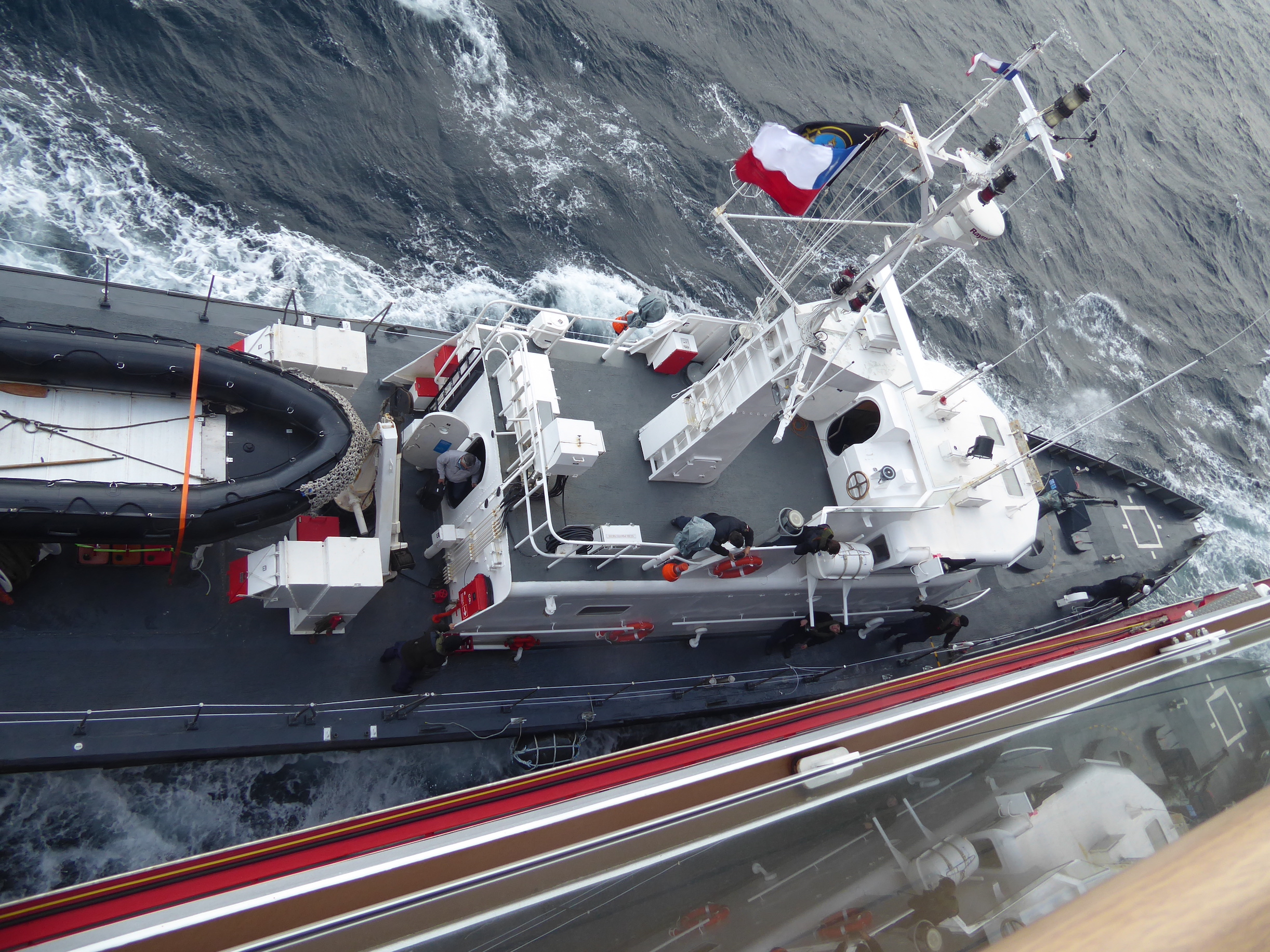 I was amazing how close the boats got. Emannuel, my friend and server at dinner, told me that the pilots simply step from one boat to another. The Chilean boat, still blaring music, then turned tail and fled: 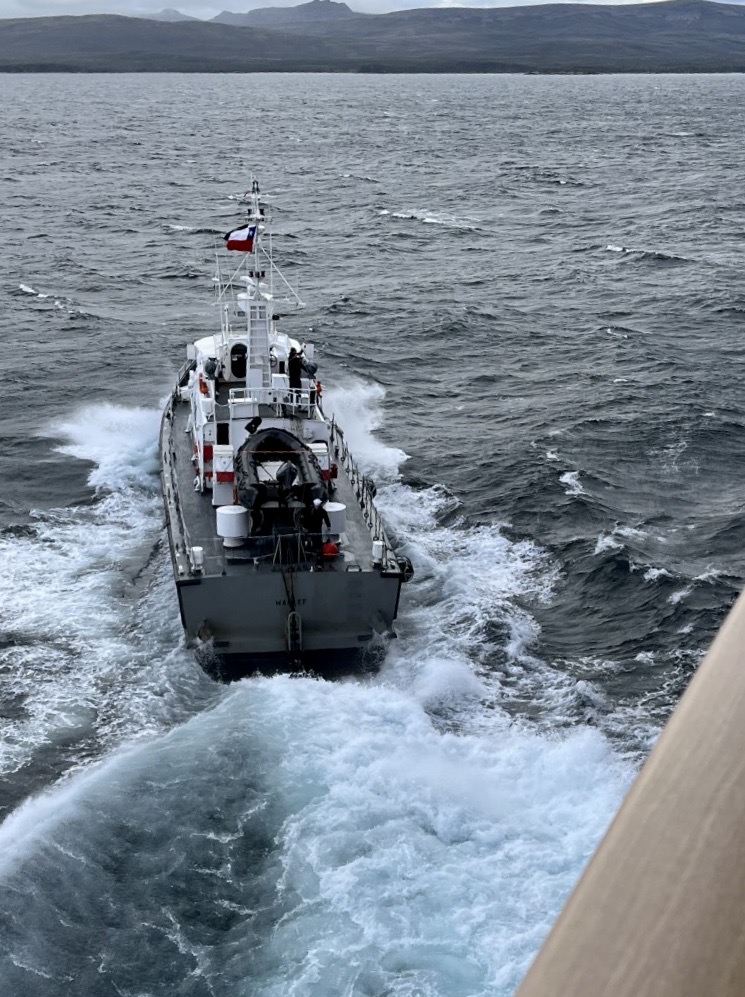 As I said, the best part of the Beagle Channel—the series of glaciers that so impressed Darwin—passed in the dark last night. We’re out of it now, and are in parts of the Strait of Magellan, a passage further north that was the first one used to cross from the Atlantic to the Pacific without using the treacherous Drake Passage. On either side are islands, fjords, rain, cloud, and fog.

Before we started through the Channel, though, we stopped for a couple hours in Puerto Williams, often described as “the southernmost city in the world”. There is debate about that, depending of course on what you define as a “city”, but with a population of less than 3,000 people, it surely is more of a “town.” It does have a wonderful setting, though, backed by jagged, snow-capped peaks. 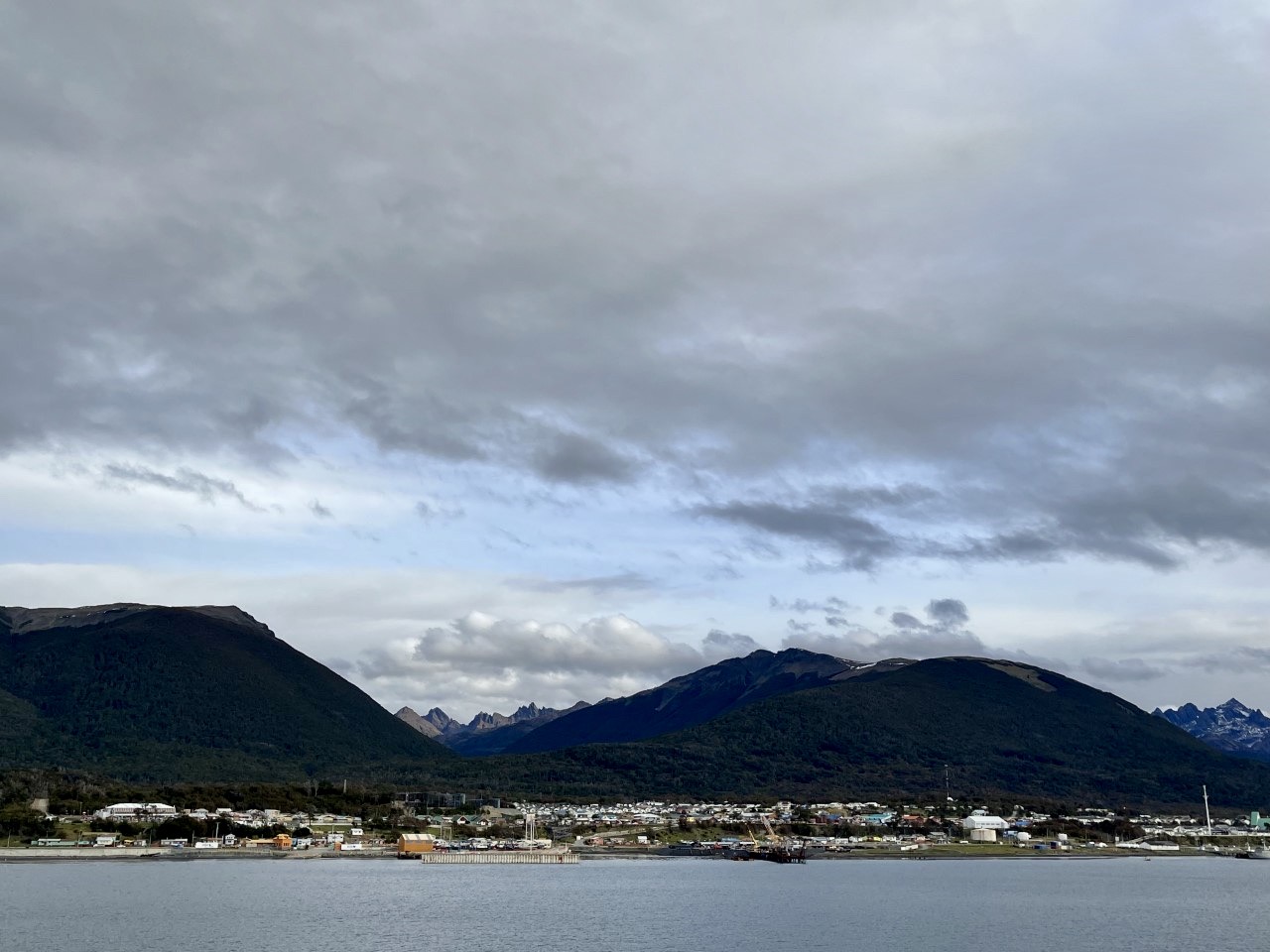 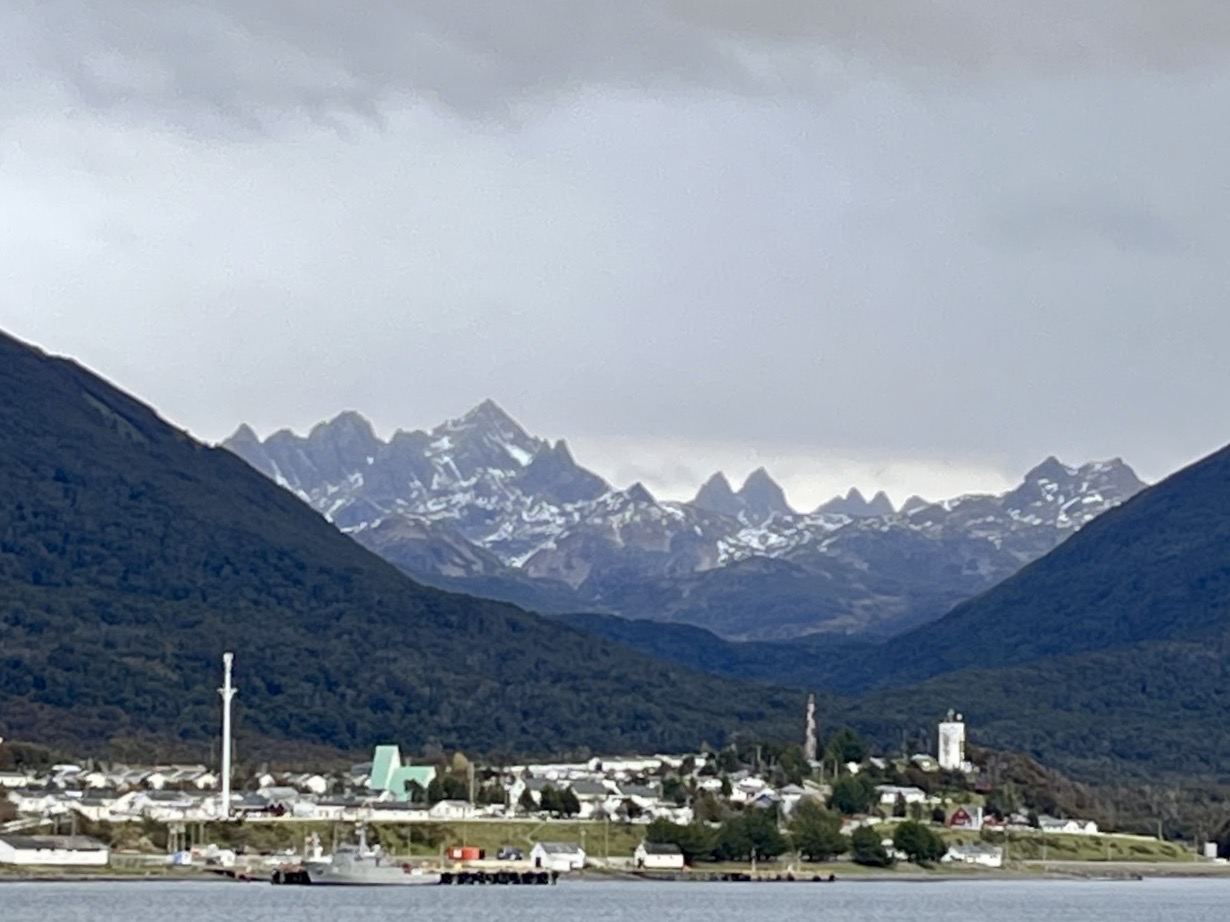 A panorama of the area around the “city”.

And so we steam on, boats against the current, borne ceaselessly towards Valparaiso: 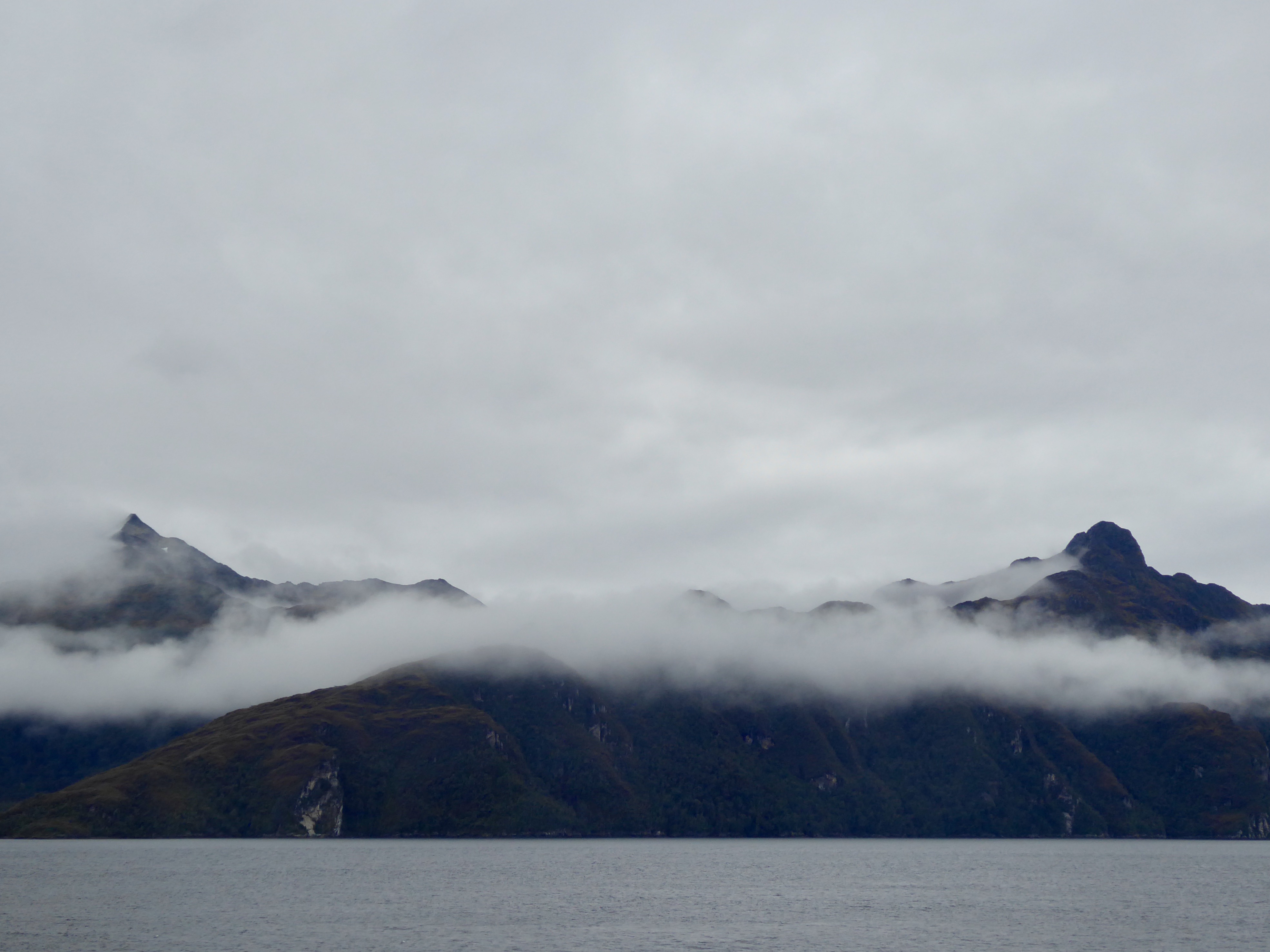 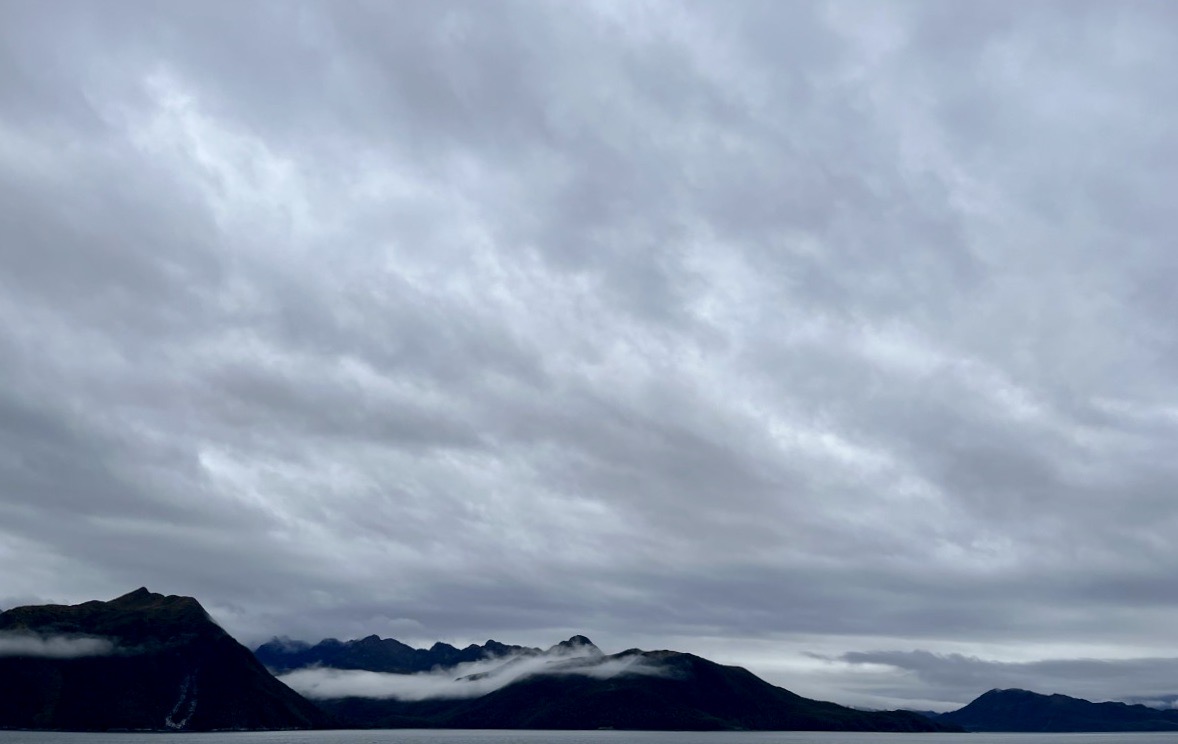 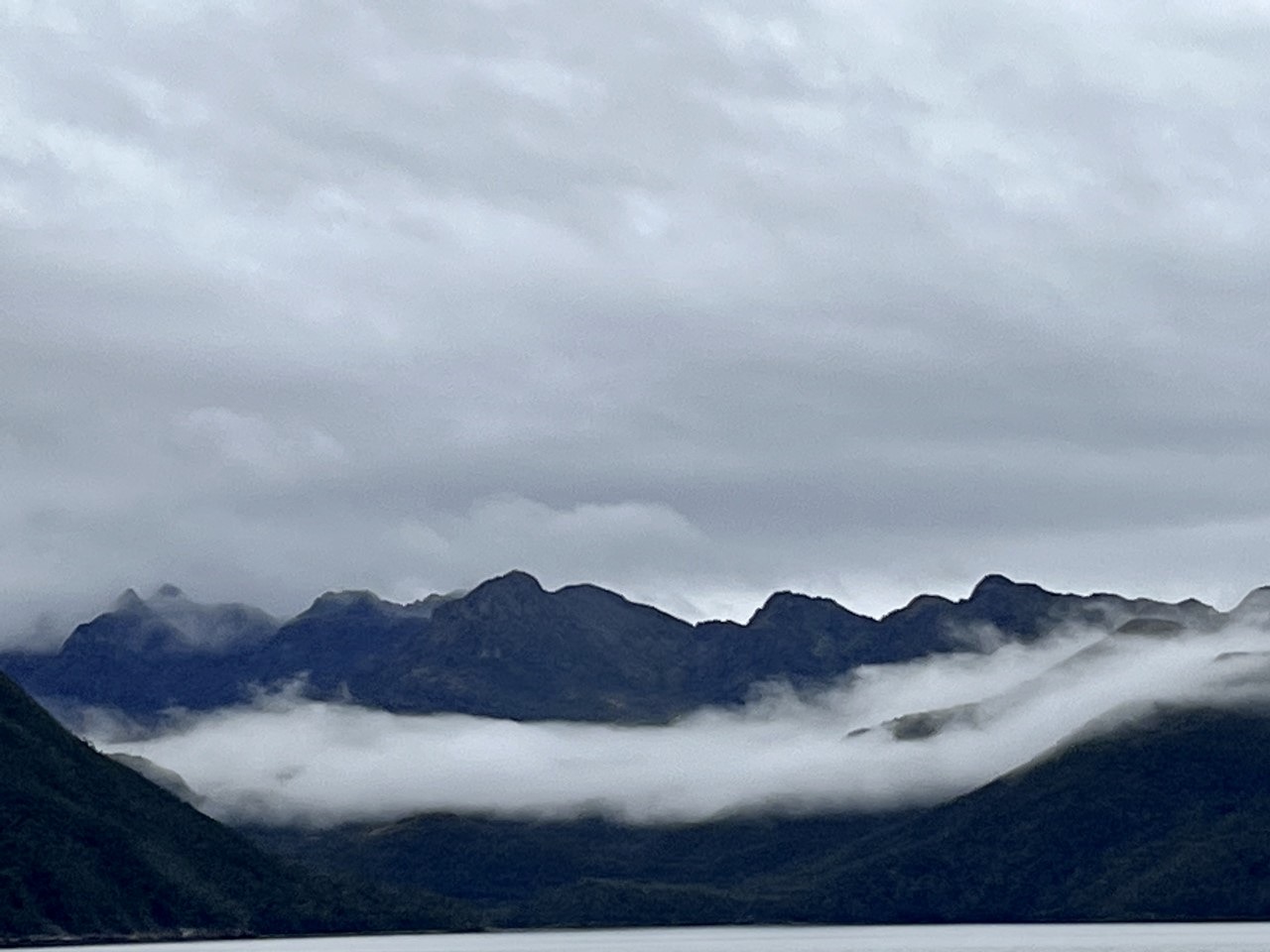 Even I have a bit of ennui, and have lost a lot of my appetite. Maybe it’s because I’m not doing landings and climbing, but I’m also tiring of the fare, even though the chefs do their best to make it diverse.  Last night I had three chicken steamed buns and a glass of white wine. I couldn’t even manage a milkshake! 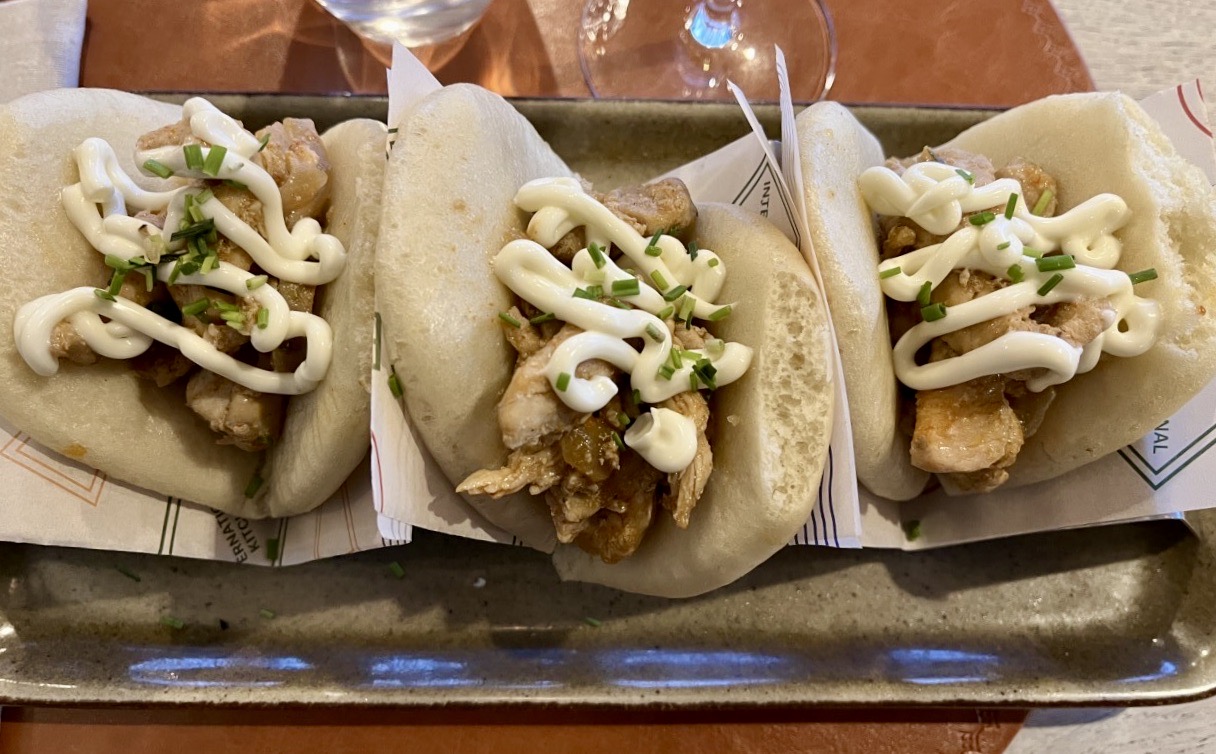 After I return home, I’ll barely have time to take care of business, check on the ducks (we have three hens: Honey, Dorothy, and Cyndi, with an aggressive drake named Putin), and prepare for my next trip, as lecturer on an alumni trip to the Canary Islands, Morocco, Gibraltar, Spain, and Portugal. That’s a short one (13 days including flights), but I’m looking forward to seeing Gibraltar for the first time (the last time I visited it couldn’t be entered from Spain) and visiting Morocco again, where I haven’t been since 1972.

And then I will rest and tend my ducks, who will be close to having babies.