I bet you didn’t know that the world famous jazz bass player Charlie Mingus also specialized in toilet training cats! Although Mingus died in 1979, the NYT just issued an article about his book on toilet training your moggy. (You know you’re an ailurophile if you know about that book).

An except of the article:

Sometimes, at Charles Mingus’s apartment, you would have to wait outside the bathroom as a cat finished using the toilet. The legendary jazz composer and bassist had grown tired of coming home to an overflowing litter box. So he devised a solution. And in 1954, he wrote it up on a single sheet of paper and began handing out copies. A pamphlet version followed.

“The Charles Mingus CAT-alog for Toilet Training Your Cat” arrived in my mailbox in the second year of the pandemic. I learned about it after Topos, a bookstore and small press in Queens, reissued it — a piece of paper folded into three parts, its title in Cooper Black font, a photo of Mingus’s tuxedo cat, Nightlife, on the cover.

It took Mingus three or four weeks to toilet-train Nightlife. His method, in a nutshell, was to fill a shallow cardboard box with torn-up newspaper, instead of litter, which can clog the pipes. He placed the box far from the bathroom to start, then began inching it closer. “Do it gradually,” he writes. “You’ve got to get him thinking.”

Try this at home, if you want; it actually works for some cats.  It’s actually a short pamphlet and the link says you can buy it at brick-and-mortar stores in some cities, including New York and Berkeley. 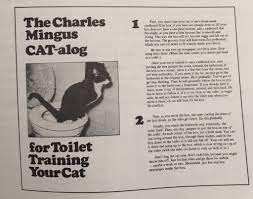 Here’s a nice Guardian article that several readers sent me. I didn’t know who David Baddiel was, but he’s apparently quite popular in the UK; his Wikipedia bio describes him as “an English comedian, presenter, screenwriter, and author.” 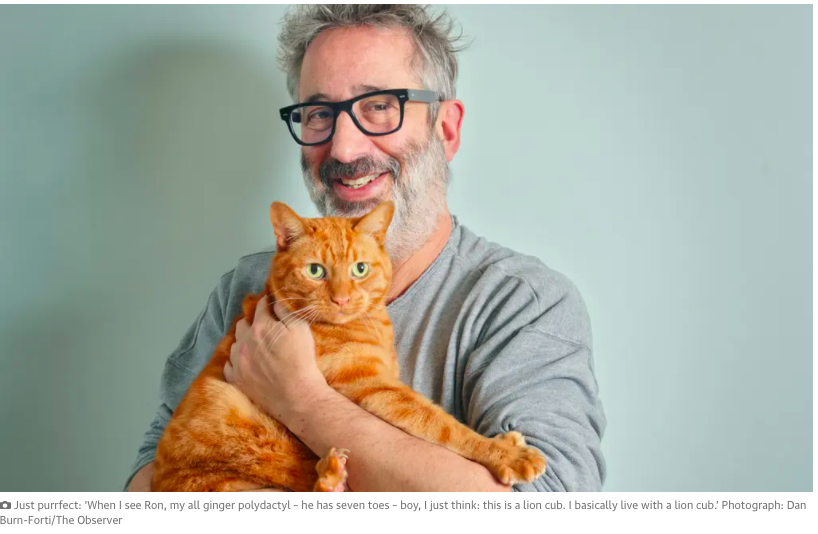 It’s a lovely paean to cats, and echoes many of my feelings, though I’m a bit in doubt about this:

I am a fundamental atheist, but when I look at one of my cats – I presently have four – curving like a Matisse in a shaft of sunlight, I believe in God. Some people on social media see me as the antichrist, but really, I am the anti-Zouma.

But Baddiel redeems himself:

It isn’t, however, just about beauty, because cats are not just beautiful (although they really are: what other small animal is a perfect micro-copy of their big version? When I see Ron, my all ginger polydactyl – he has seven toes – boy, I just think: this is a lion cub. I basically live with a lion cub). Some of you may be aware that although my day job is still, nominally, comedian, late in my career I’ve been pulled into a type of activism, where I spend much of my time trying to redress various negative stereotypes and myths and bad imaginings that surround a long-maligned group. It may be time however for me to move on from Jews, to cats.

And he takes a clear side in the eternal debate of Cats Versus D*gs. Here he refers to those who “genuflect reflexively toward dogs.”

Cats have won. In the eternal battle between them and the barking, snappy ones as to who humans prefer being around, there is no doubt that first place has gone to the felines. People who don’t accept this will point to the fact that in the UK, there are still slightly more dog-owners than cat ones, but these are analogue people who presumably have never heard of the internet. In 2015 – these are the figures I can find, now it will be 10 times that – there were more than 2m cat videos on YouTube, with an average of 12,000 views each, a higher average than any other category. So from the point of view of what animals people like to watch and look at on their screens, these TV commissioners genuflecting reflexively towards dogs are just incorrect.

Secondly, it’s wrong. Because cats don’t pander to humans, that doesn’t mean that they are inexpressive. I’ve really had a lot of them, and each one has been very different and absurdly idiosyncratic. Pip, Ron’s mother, is often lazy and irritable, but will come over all kittenish and adorable if my wife sings her, at a particular pitch, Only You by Yazoo. Chairman Meow would stick her tongue out at you if you ran your fingers over a comb. Tiger, Ron’s brother, will grab your attention by tapping you gently on the arm with his paw, which is not unusual in and of itself, but he often becomes uncertain about the tap on the way to the tapping moment and so just stays with his paw poised in the air staring at you in hope and confusion, which is so cute it makes me want to die. These are just the tips of the various icebergs of personality that a few of the cats I’ve owned display.

Reader Laurie sent me an NPR article or video called “Cat videos get the Hollywood treatment, thanks to one videographer.”  I have the link, but it doesn’t work for me, perhaps because I’m overseas. However, the videos are apparently adorable because they star a black cat named “Owlkitty”, who has a website here.

Lizzy (stage name: OwlKitty) is a 5 year-old floof living in Portland, Oregon. She stars in all your favorite movies and tv shows and gets lots of treats and cuddles in return. Offscreen, Lizzy loves her laser pointer, her adoptive mother (a 12 year-old tabby) and the taste of cream cheese. She’s never caught a bird.

So far, OwlKitty has made appearances in such classics as Star Wars, Harry Potter, Jurassic Park, How to Train your Dragon, The Shining, Titanic, 50 Shades of Gray and Risky Business. You can also find her in Game of Thrones, Ariana Grande’s music video and Red Dead Redemption 2.

Here are two videos featuring Owlkitty. I can’t watch either of them on the ship, as we don’t have streaming video, but I believe I’ve seen them before. And, as I recall, I wasn’t impressed, but I guess others are.

You (but not I) can see other Owlkitty videos here.

11 thoughts on “Caturday felid triefecta: How to toilet-train your cat; David Baddiel and his beloved moggies; and Owlkitty the video star”