Today will be a short Caturday Felid post as I’m afloat and also lecturing. First, the answer to the question we’re all asking.

Well, the answer is simply: they’re a lot more powerful and heavy than, for example, leopards. While they can get up okay, they could hurt themselves trying to get down:

Other big predatory cats climb trees all the time. “Anatomically, leopards are just better built for climbing,” said Luke Hunter, executive director of the big cats program of the Wildlife Conservation Society in New York City. “They’re lighter, and a leopard’s scapula, their shoulder blades, are proportionally bigger, flatter and more concave than a lion’s.

“Lions, on the other hand, are built with enormously powerful forequarters, and a very, very stiff back,” he continued. “That’s for wrestling heavyweight prey, such as a buffalo, to the ground.” Their enormous power, he added, “comes at the cost of the agility and the vertical power that a leopard has in being able to whip up a tree with an impala.”

But there are other reasons as well. When I saw the headline, my first response was “they don’t need to to spot prey or stash their kills, for, unlike leopards and cheetahs, lions are social animals.” And that’s part of the explanation as well:

Most lions also have little need to climb trees. They are social and live in prides and can generally defend their meals from other predators. Solitary leopards must stash their kills somewhere safe and would, according to one study, lose more than one-third of their kills to hyenas if they were unable to hoist their captured prey up a tree.

And in some areas the lions do climb: if the trees are of the right sort with low, horizontal branches, or where they’re tormented by ground-level biting flies or when fleeing elephants.

Now here’s my question, “Do cheetahs climb trees? And if not, why not?” I don’t think I’ve ever seen a cheetah up in a tree in photos or videos, but I can’t be arsed to look on Google image. Ten to one you’ll find at least one, but cheetahs simply aren’t known for being up in trees the way leopards are.

Googling around, you get a variety of answers ranging from “Sure, they’re good climbers” to, very often, “No; they can’t climb trees because they can’t retract their claws.” And it is true that cheetahs are one of only three cat species that can’t completely retract their claws, but it seems to me that this wouldn’t put them at a disadvantage when climbing trees. You want to use your claws to get up a tree! I swear, you can find any answer you want on the Internet.

From OddityMall, there’s a gift that every cat lover must have. Cat haters will also like this, as you get to poke the cat in the butt with a pencil. Click on the screenshot to see more or to buy one: 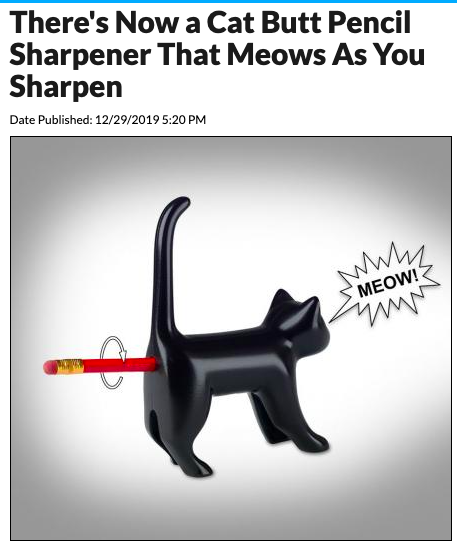 We like to pride ourselves on having the best selection of weird butt products. If you’re looking to pull something out of a dog or cat butt, like tissue paper, toilet paper, or maybe rest your drink on a cat butt coaster, you’ve come to the right place. This cat butt pencil sharpener, is just another weapon in our arsenal. 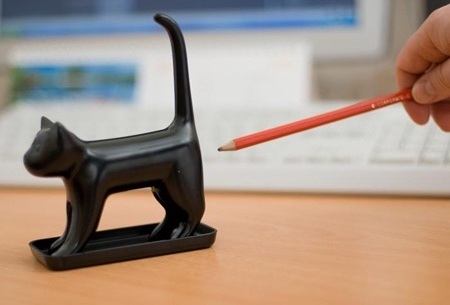 To use the cat butt pencil sharpener just insert your pencil and twist like you would any normal pencil sharpener, and then best of all, the cat meows as you sharpen. This way you’ll know the cat is enjoying having a pencil jammed up and twisted into its butt. Either that or it’s meowing in protest of having something jammed up its butt without their consent. 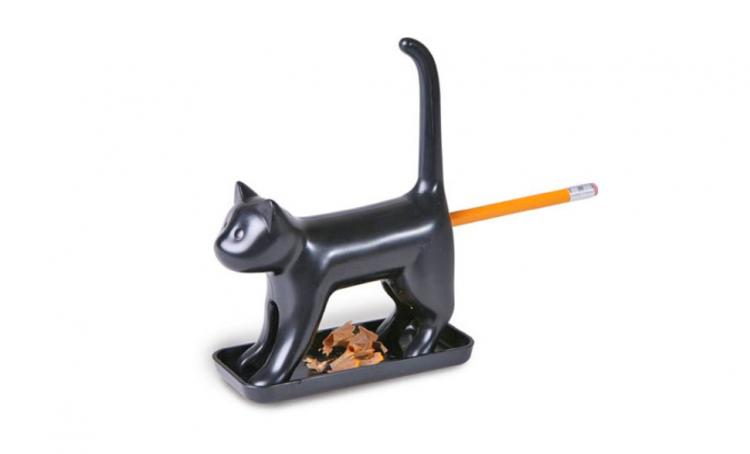 It also comes in white: 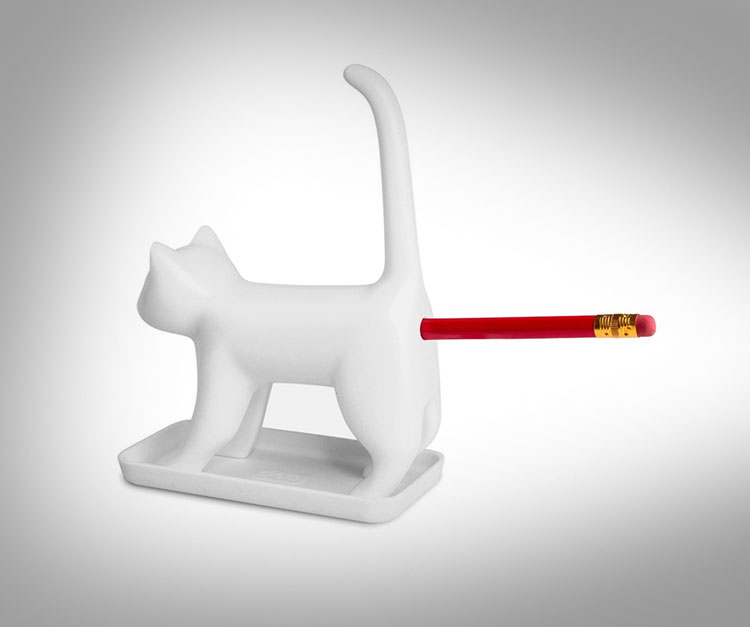 Sadly, it’s out of stock at Amazon US and Amazon UK. In fact, if you can find it for sale, post the link in the comments. Why wouldn’t every cat lover want one of these? 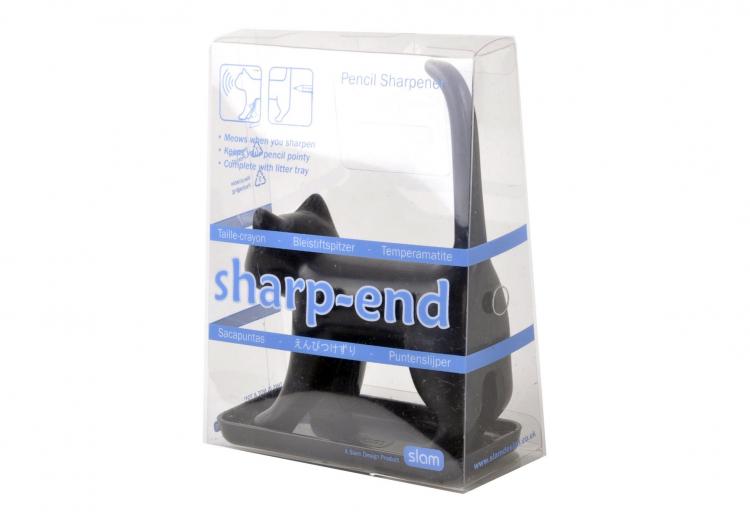 A video of its use, which I haven’t seen as we can’t watch YouTube videos on the ship.

Finally, refugee cats (or rather, refugee staff with their cats) from Ukraine, and you’re probably seen many similar photos. How could you leave home without your beloved moggie? Here are just a couple.

From the Atlantic. Reader Malcolm’s caption: “A Ukrainian civilian takes shelter with a cat in their backpack at the Przemysl train station, 20 kilometres from the Ukrainian border, in Przemysl, Poland, on February 28, 2022. -Interesting picture via The Atlantic” 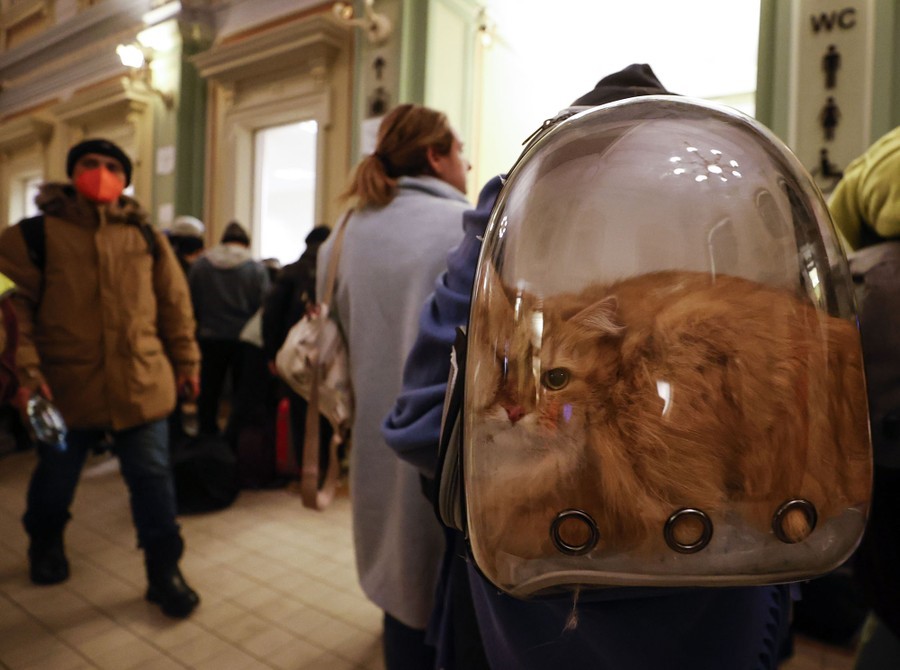 And a few more: 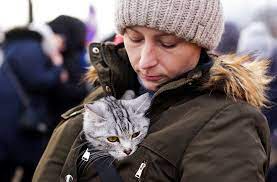 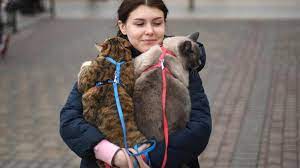 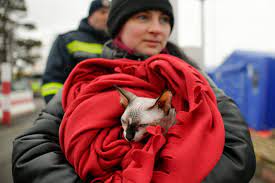 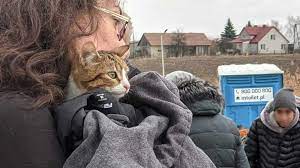 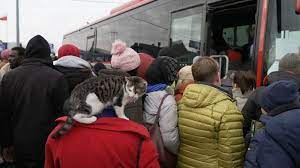