By “Day 4” I’m referring to yesterday, of course, which was spent crossing the ill-tempered Drake Passage, involving heaving seas, heaving bellies of the afflicted, and both rain and snow.

I lectured twice yesterday, giving part I of my Fuegians, Beagle, and Darwin talk in the morning and part II in the afternoon. Podium glitches with the connection cost us 15 minutes at the first talk, and it took about 5 minutes into the lecture before I got over my anxiety.  I need to become a Buddhist. After that, I think both talks went tolerably well, but I have no idea how to find out. The “audience” consisted of one person who fielded questions via a remote app (there was one), the A/V expert, a lecturer in the history of science, and ls a poor, beleaguered German translator, who translates what I say in the moment into German, and is worried that I speak too fast. My thanks and apologies to her.

Here was lunch in the Aune restaurant on the ship. Descriptions from the menu (there was a choice of three starters, three mains, and two desserts). 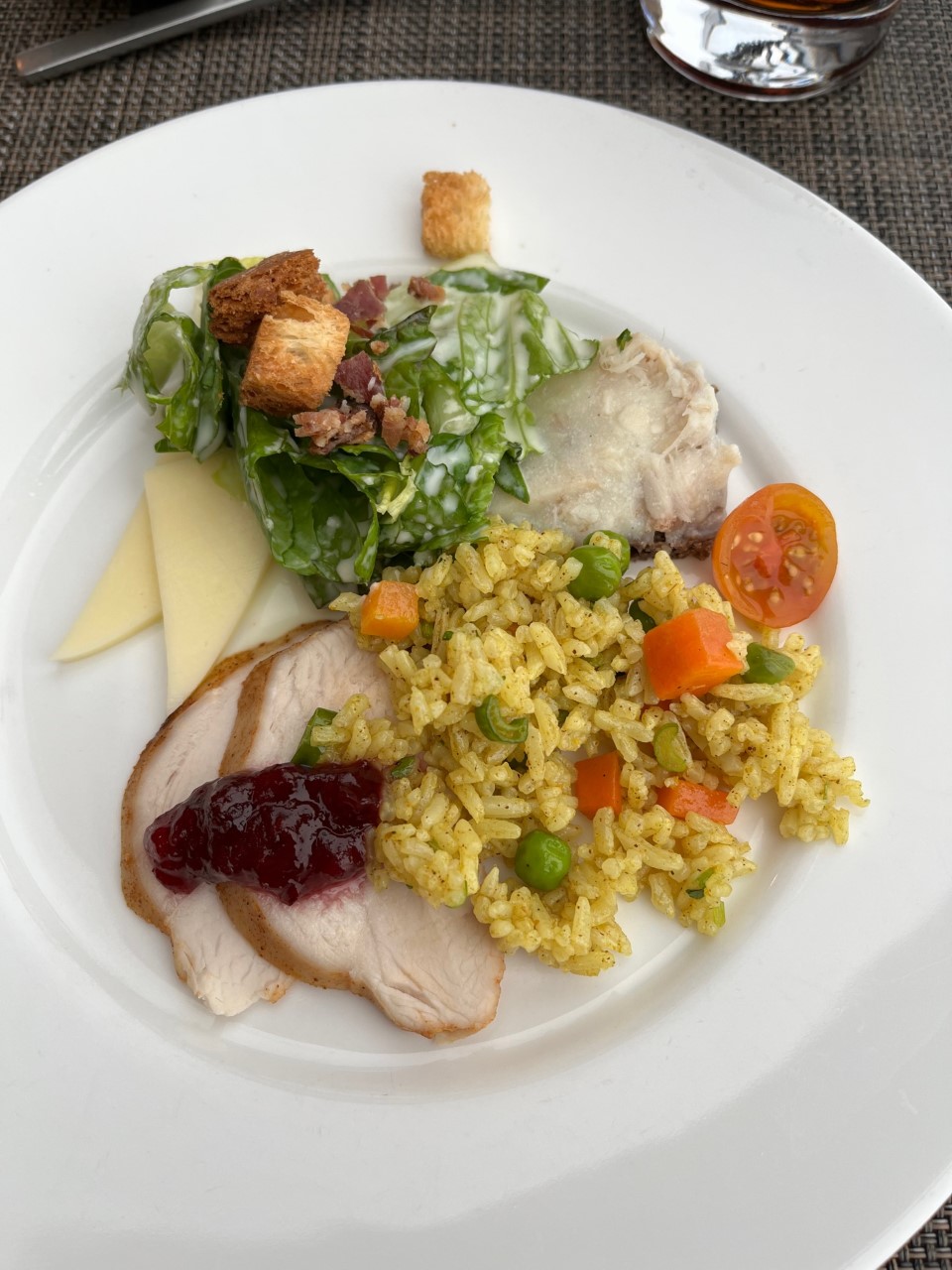 This was an excellent dish. 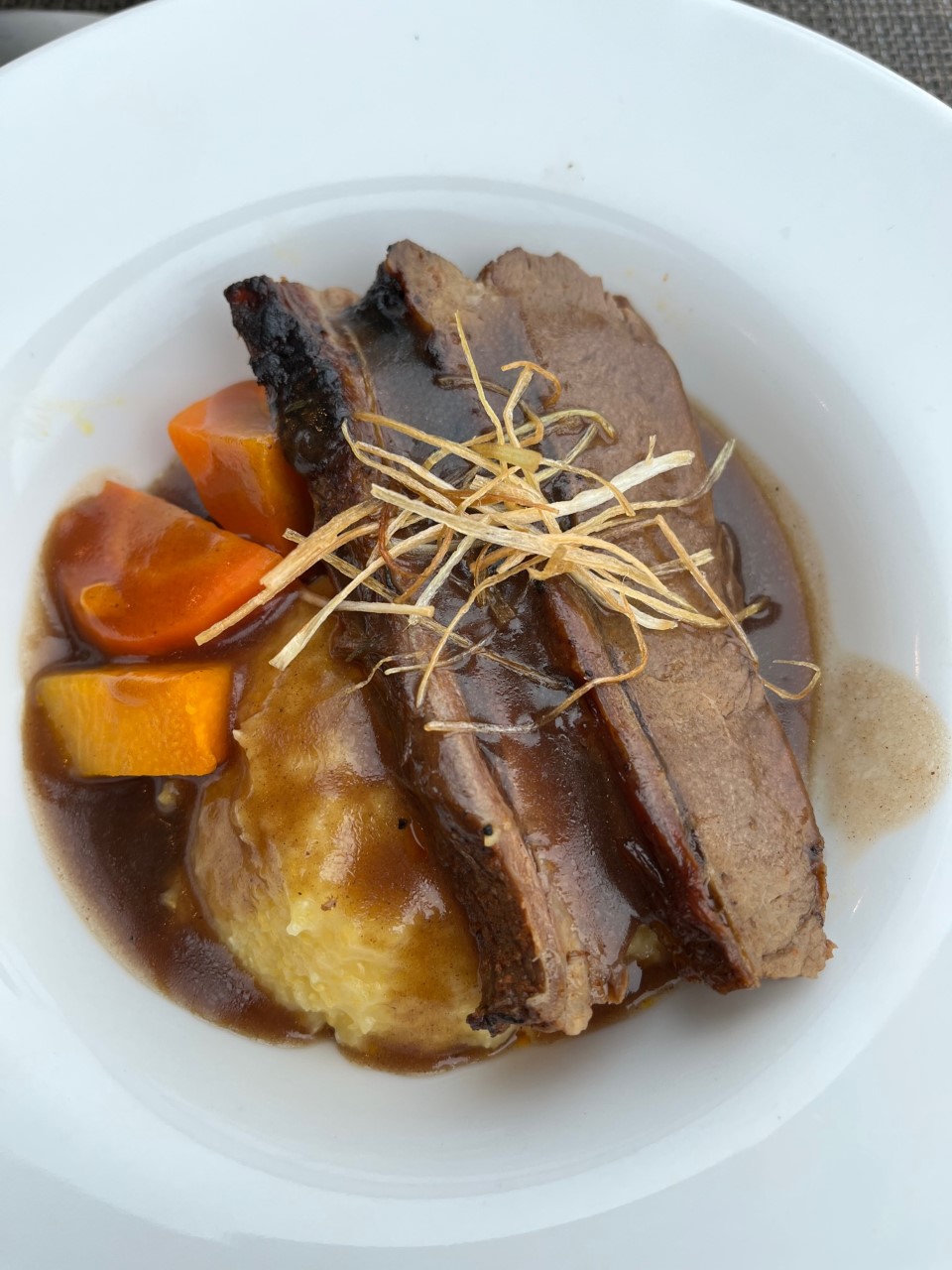 Also very good, with a crumbly graham-cracker-like layer on the bottom. 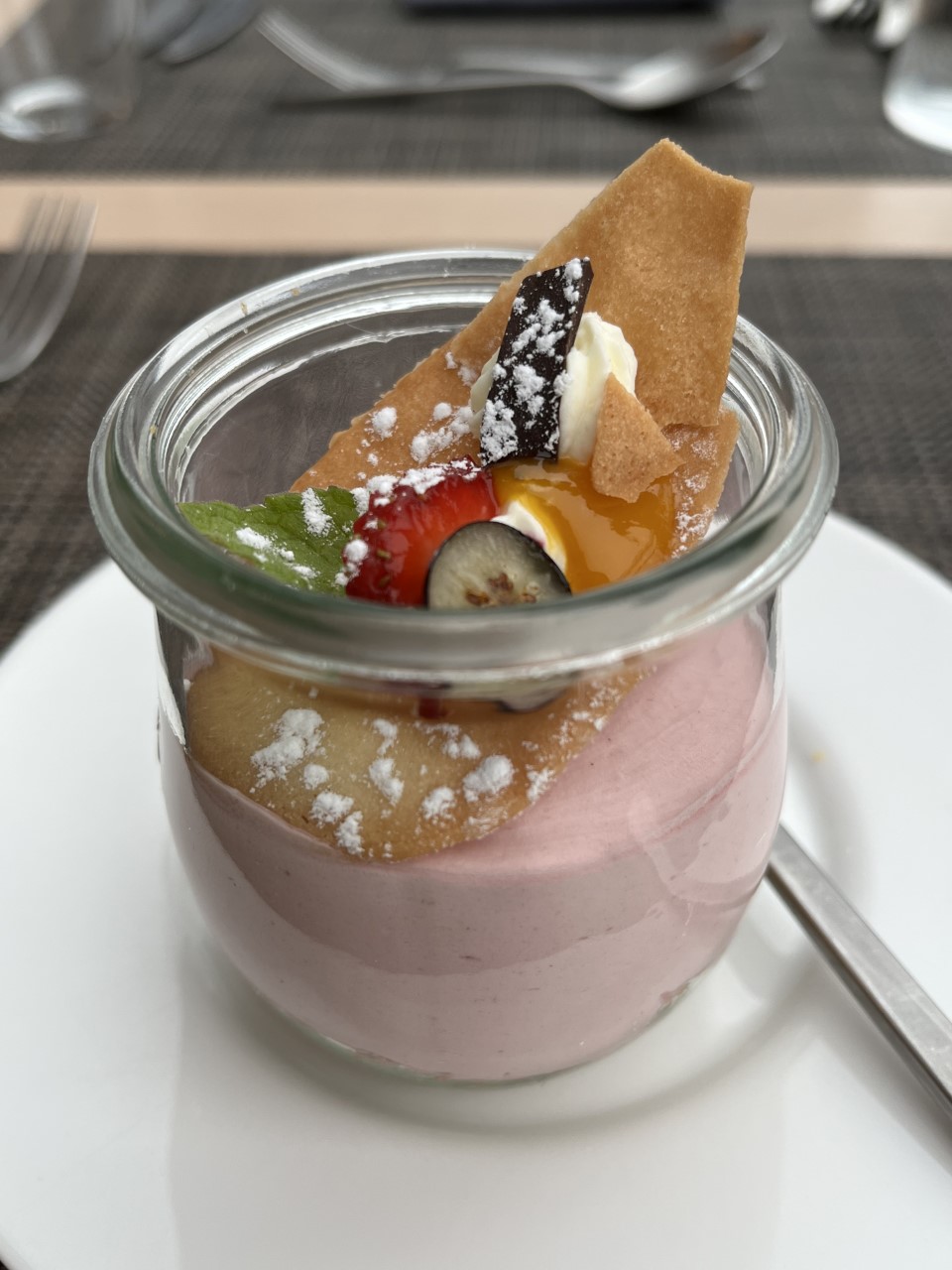 Two slides from my afternoon lecture; these are paintings by the Beagle’s artist, Conrad Maartens, who was on the voyage with Darwin. It shows the Fuegians, both alone and, in my final slide, greeting the Beagle. 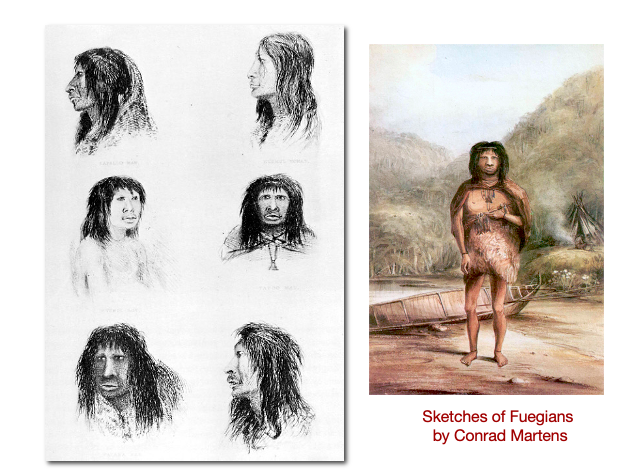 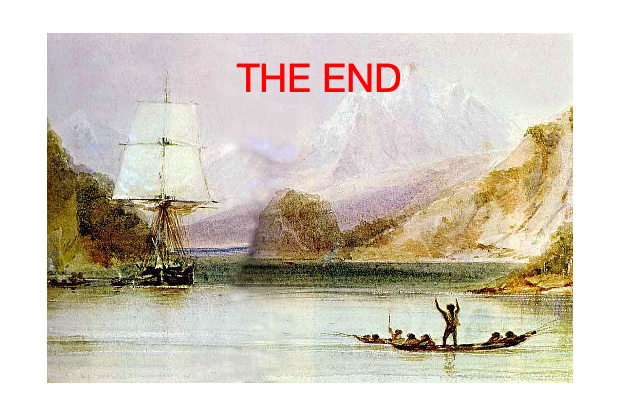 Here’s a video of Maarten’s work on the Beagle voyage. He was aboard for two years and got off in Australia, where he spent the rest of his life.

It snowed and rained a bit, but I don’t know how chunks of ice got on my balcony! 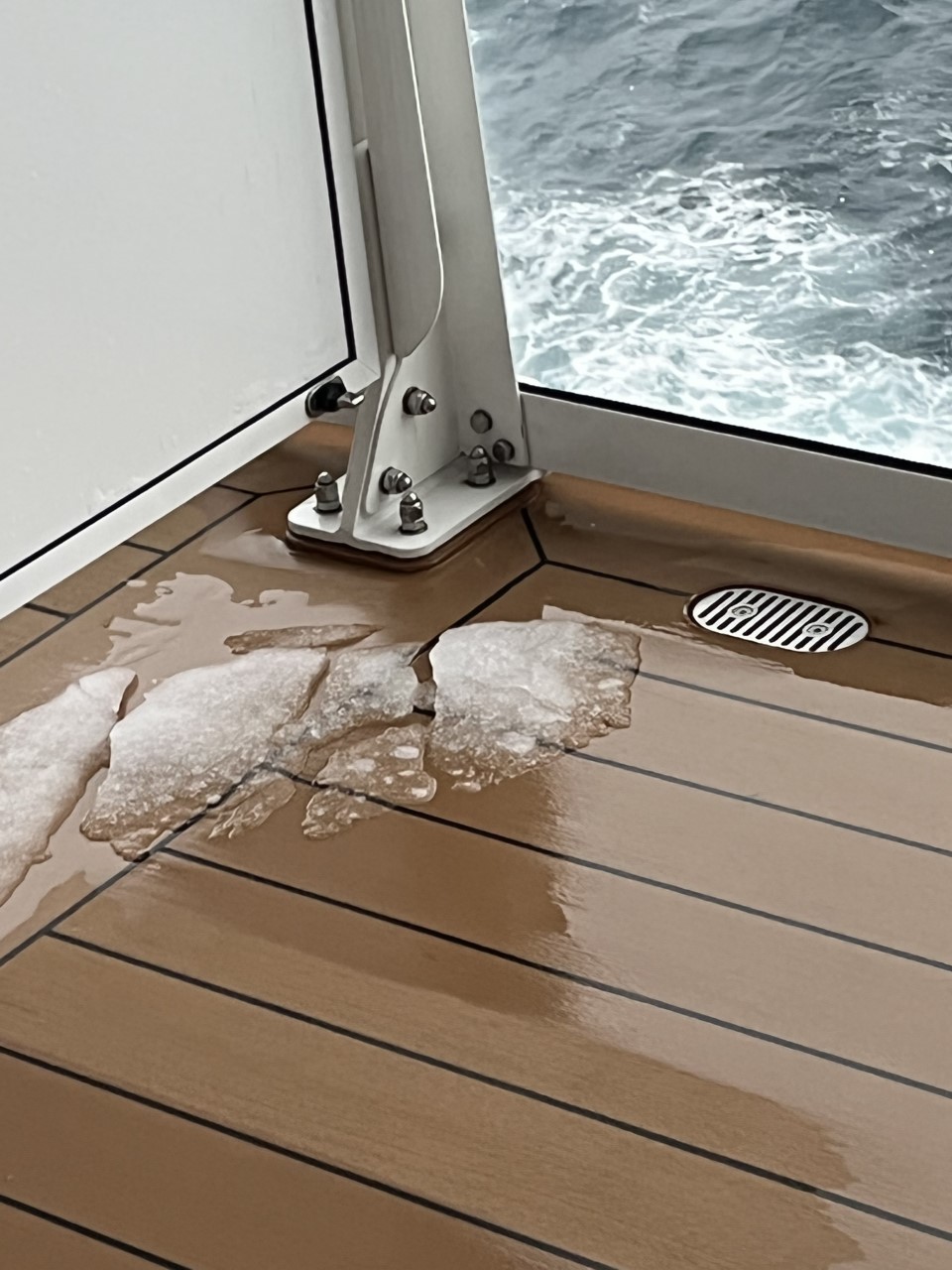 Dinner at Fredheim, my favorite restaurant on the boat. First, the cozy little room. Every seat faces the sea. In the larger Aune venue, window seats are at a premium, and people begin breakfast by putting their coat on a window table before heading to the buffet. 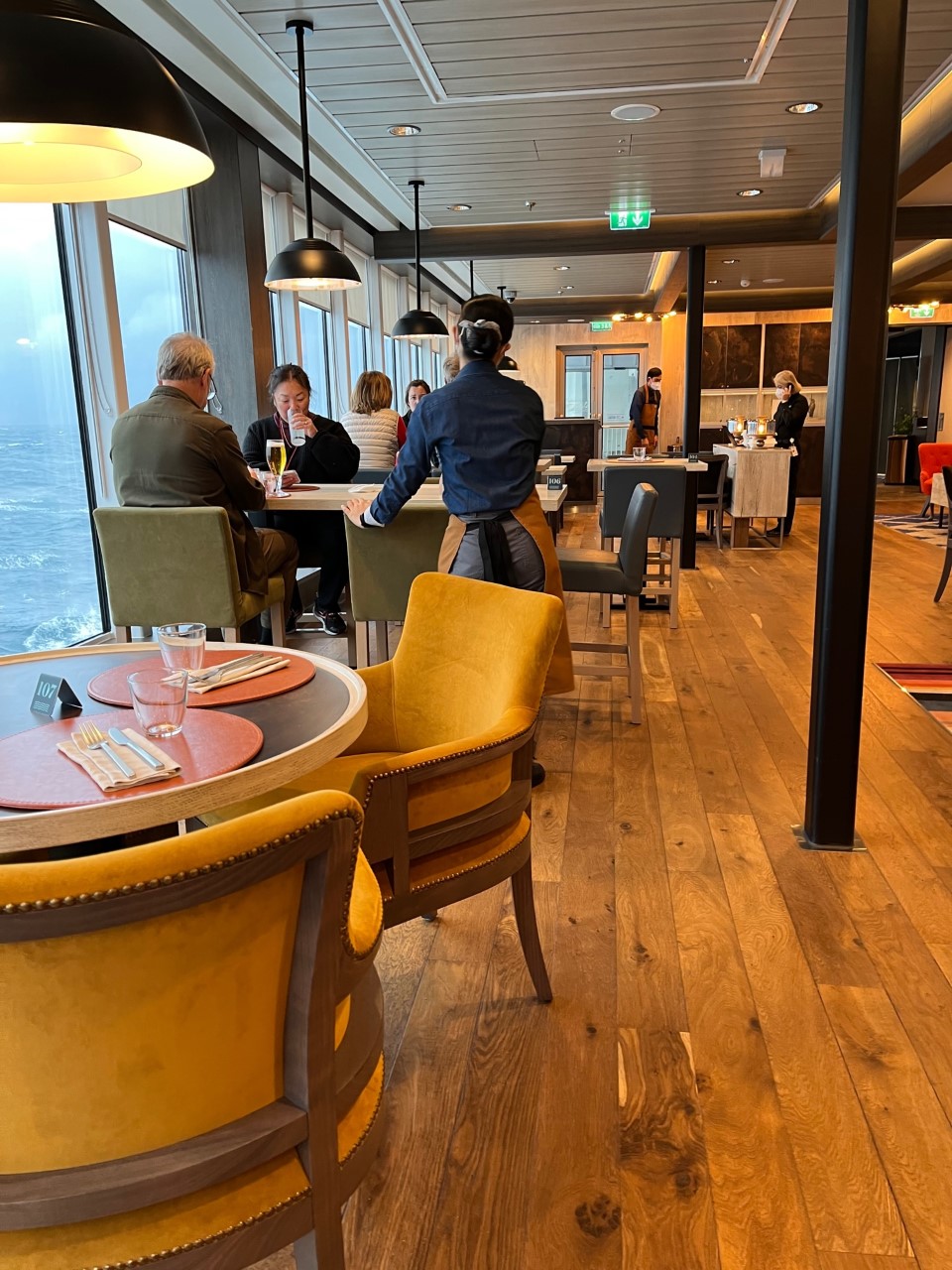 I’ve now been officially classified as a passenger rather than crew, though I function as both, at least as a lecturer. But as a passenger I can now drink (crew aren’t allowed to), and I discovered that all restaurants have FREE WINE AND BEER! So, for dinner I had the King Crab Roll, described as “in a rich bun. with butter, kingcrab, dill mayonnaise, and crisp vegetables.” It was excellent, and I ascertained before ordering, of course, that it was real king crab rather than that vile shredded fish that they palm off on the credulous as “krab.” And I had a beer! There were fries, too, which come with every sandwich. 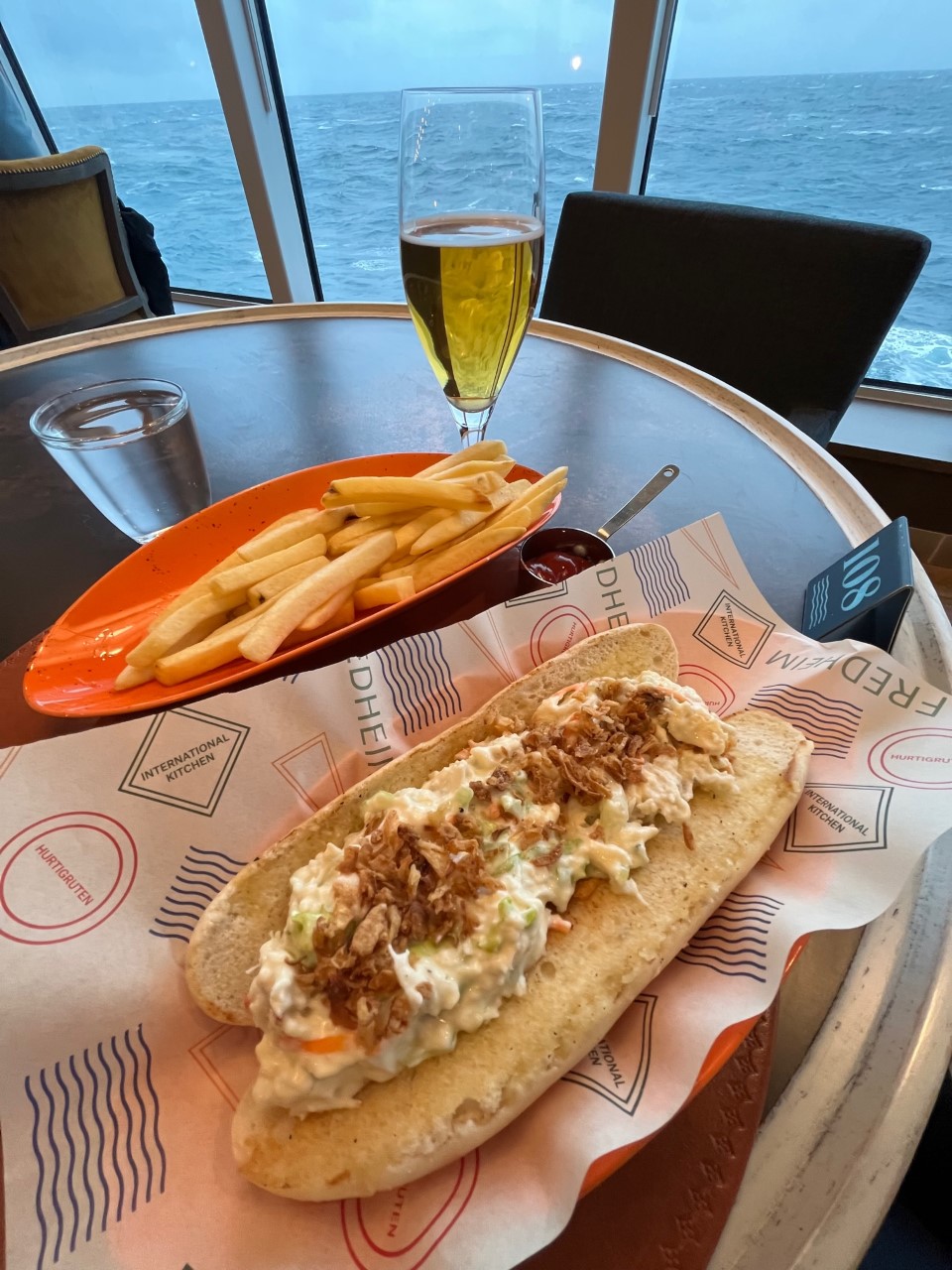 And, Ceiling cat help me, I had a strawberry shake, describe as “vanilla ice cream, frozen strawberries, strawberry coulis, and dried strawberries sprinkled over.”  I have to stop eating this way, but it’s hard. For, say, eight days in Paris I can handle this level of gluttony, but I’m aboard for a bit over a month! (However, as the Roolz specify, do not tut-tut me about my diet.) 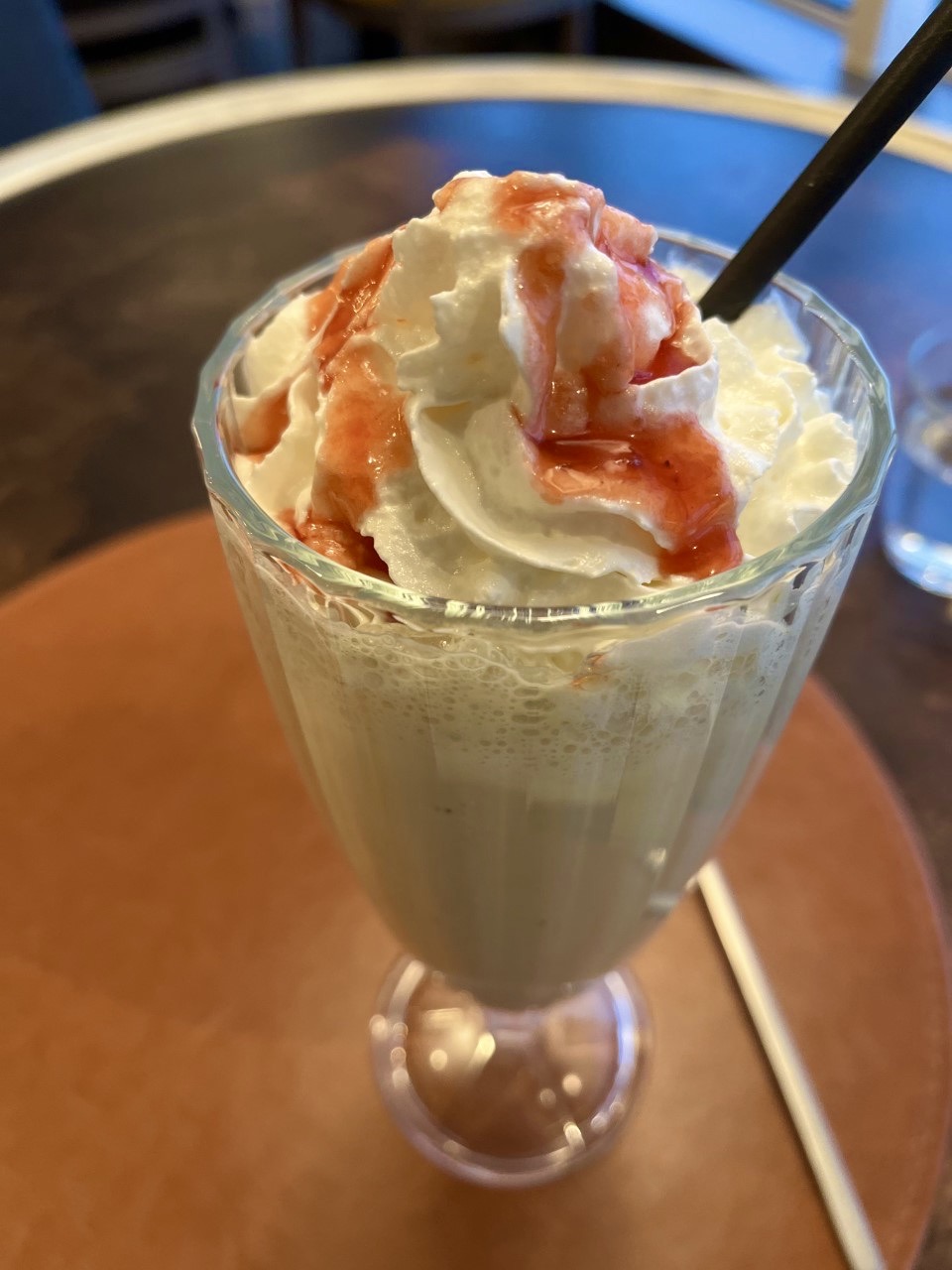 When I asked why I’d been reclassified as a passenger, I was told that the medical certificate I submitted (the one they asked me for) was the passenger medical certificate. They did not tell me that crew need a special “seaman’s medical certificate” which is very hard to get in the U.S., as one has to be examined by a Norwegian Approved Seaman Doctor, and I think the closest one was in Florida. Ergo, I cannot dine below decks, which is sad, but now I don’t have to convince every venue upstairs when making reservations that I did indeed have permission to dine in the passenger restaurants.

There’s also a fancy restaurant for suite-holders to get all their meals; it’s called the Lindstrøm.  I’ve never even seen it, but we regular plebes can buy dinner there for €25.