Matthew sent me a TikTok link and added this:

There is a very old and baggy cat on Tiktok called Pot Roast. I had never seen her as I dont do Tiktok. Anyway, she just died and it is very sad and there is a mass outpouring of grief on Twitter. Search for Pot Roast.

Here’s Pot Roast from the article below: 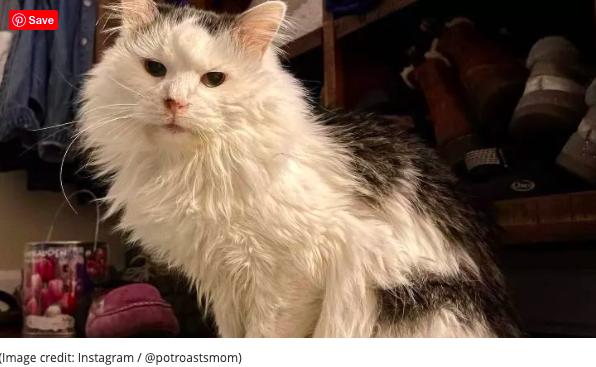 I did, and found this article on Pets Radar (click on screenshot):

A cat influencer! From the piece:

Cat lovers across the Internet are sharing their grief after it was revealed that popular pet influencer Pot Roast the cat has died after being diagnosed with FIV, also known as Feline immunodeficiency virus.

The news was shared by Pot Roast’s mom, known to the Internet as PRO, over on her TikTok channel.

“My little bird flew away at 11.47am this morning,” she wrote as a caption to the video. “When I saw Pot Roast this morning I could feel that she was done fighting and even though I wasn’t done fighting for her I let her go. She went to sleep in my arms.”

The clearly distraught PRO can be seen crying and cradling the blanket her beloved cat died in.

“In the end it was just her and me and I am grateful for every moment we had together.”

The sad news followed a series of videos that provided health updates to her fans. In the most recent one, the social media star shared that Pot Roast had been taken to hospital to have her second blood transfusion and suffered a seizure from low blood sugar, with the possibility of having a third.

She wrote that she did not feel she had a lot of time left with Pot Roast and distanced herself from social media before sharing the devastating news to her fans, who were already deeply concerned about the feline star after it was revealed she had been diagnosed with FIV, on top of her other health concerns.

“So Pot Roast tested positive for FIV and this blindsided me,” PRO said in a video posted on February 9 2022. “She tested negative as a kitten, as did all my other cats, as did every other cat we foster and I just never considered…”

Speculating on the ways Pot Roast may have received the virus, PRO suggested that her cat Carrot who frequently went outside may have been bitten by a cat with FIV and passed it Pot Roast.

here's my fave pot roast video in honor of her <3 i love how she slowly sinks into the pineapple hat pic.twitter.com/j2GpBEsfNU

This article in Smithsonian recounts the history of cats in the White House. There have, of course, been many fewer cats than d*gs, and my theory, which is mine, is that a President must exercise power effectively, and you can do that more easily with a d*g than with a cat. Be that as it may, this article tells you about those Presidents who were also ailurophiles. I’d also predict that in the future, Democratic Presidents will have more cats than Republican ones.

There is, of course, Joe and Jill Biden, who repeatedly promised to get us a First Cat, and finally, after a year, came up with Willow Biden:

And who can forget the Clintons’ cat Socks, who became very famous:

And the Carters: Here’s Amy with her cat:

I was surprised to learn that Lincoln liked cats as well:

Though Abraham Lincoln was the first president to keep cats as pets—Secretary of State William Seward gifted him two kittens he named Tabby and Dixie—Andrew Hager, historian-in-residence at the Presidential Pet Museum, believes that the firstcats to pad through the White House were likely nameless. “There were probably cats on the grounds beforehand because that’s how people took care of rodent problems in food storage areas in the mid-19th century,” says Hager, who also authored All-American Dogs, a history of White House canines.

Lincoln’s love of felines, however, was legendary. Literally. Hager’s favorite potentially apocryphal tale of those days: “Supposedly he was feeding a cat from a plate and Mary Lincoln said, ‘You know, that’s not really respectful, this is a very proper house and seat of government and you shouldn’t feed the cats from the dishes.’ [In response,] Lincoln said, ‘Well if it was good enough for James Buchanan it’s good enough for this cat,’ which I think is a sick burn.’” In anecdotes more firmly in the historical record, when asked if her husband had a hobby, Mary simply responded “cats.” “I have seen him fondle one for an hour,” wrote Maunsell B. Field, assistant secretary of the treasury.

There are more tails at the link above, so go have a look.

And here’s a story from the BBC of how a “complex rescue” saved the life of a white cat named Icicle, who got marooned on the wall of a river in Great Yarmouth. Click on the screenshot:

The soggy moggy was spotted by postman Alex Smith while walking his dog in Great Yarmouth at about 08:00 GMT.

He alerted the RNLI and Norfolk Fire and Rescue Service as he said he could not see a way out for the white cat.

Stuck on the wall:

How did the moggy get down there?

The local constabulary decided that a professional rescue was needed, as they didn’t want people to endanger themselves by trying to rescue the cat.

[A firefighter] said crews were sent as he did not want members of the public to go into the water.

“This is always the case with any animal rescue, the general public will try and rescue the animal and that puts themselves in danger and it just increases the size of the emergency and puts everyone else in danger.”

He lowered a rescue line for the two-year-old pet to grab onto but Icicle had other ideas and “decided it wanted to go for a swim”, he said.

That’s crazy? What cat is going to grab onto a lowered rope? Instead, as expected, it scared Icicle into the drink: 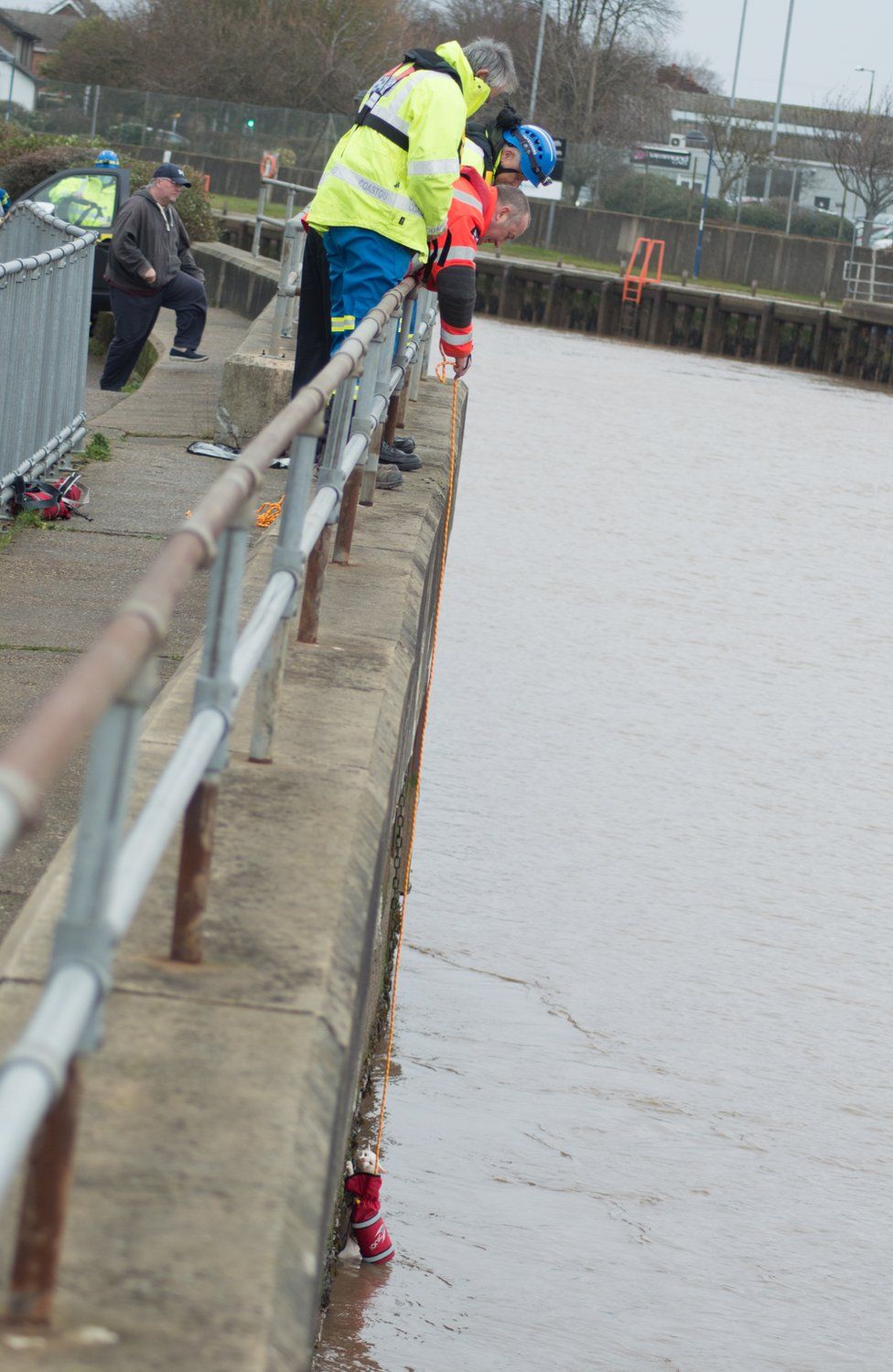 The lifeboat arrived and crew members were able to grab hold of him.

Oliver Bolton, from Gorleston, who photographed the event, said: “The swift response of the RNLI undoubtedly saved this cat’s life as it had fallen in around three minutes before they arrived.

“Without their help, and Alex Smith who noticed the cat and reported it, this would have been a completely different outcome.”

Andrew Turner, at the scene for BBC Radio Norfolk, was given some salmon trimmings by a local fish shop for the lifeguards to give to the pet.

“The shivering wet white cat tucked into it” and shortly after it was handed to the East Norfolk Branch RSPCA clinic where it was assessed, its microchip read and handed to his owner, Mandy Baker.

She said he had “recovered with no ill effects” and was grateful to “everyone” who was involved in the operation.

Let this be a lesson to you: ALWAYS get your cat chipped, even if it’s an indoor cat. They sometimes get away, you know.  And Icicle made it. Here he is back at home: 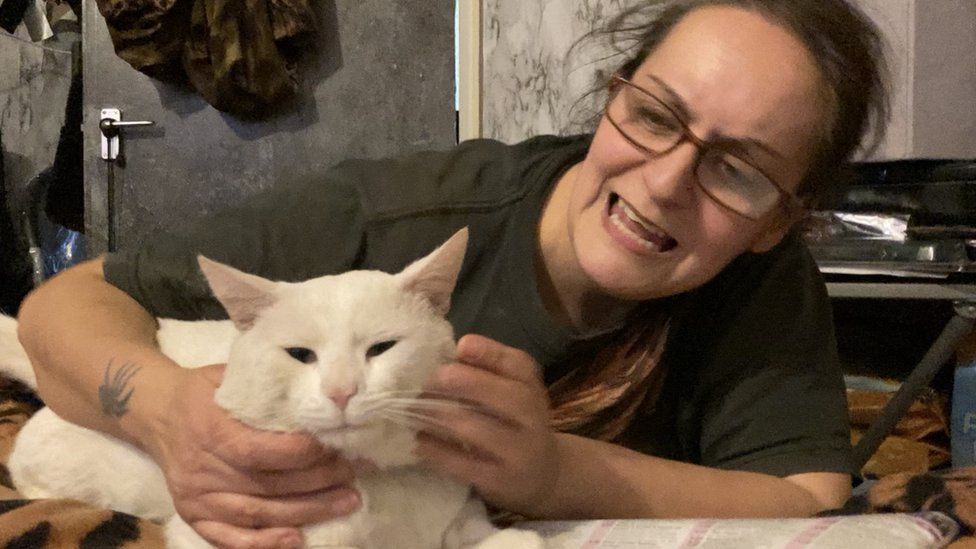 Lagnaippe: An amazing feat of acrobatics by a cat (from Reddit):

This Cat making the most precise jump ever from nextfuckinglevel