I guess if Newsweek is the right-wing weekly of choice, then Time Magazine is its woke equivalent. The article below (free; click on screenshot) is about what one might expect from the Executive Director of the Center for Social Justice at UC Berkeley Law School—in this case Savala Nolan.  But it’s about the most offensive and authoritarian piece of Woke claptrap I’ve ever read.

It’s not enough that Nolans’ piece hectors all white people to “do the work”—and that means doing the “work” she recommends, which means filling yourself with guilt—but she also instructs us that we must get our friends, family, and loved ones involved as well. And if they don’t become our “allies” in the journey to full guilt (and thus expiation), then we should punish them!. Those are the “tough conversations” we’re supposed to have. “If you don’t start reading Kendi and DiAngelo right now, and discuss them with me, then you’re a bad person and not serious about racism.”

I am not making this up. Click to read: 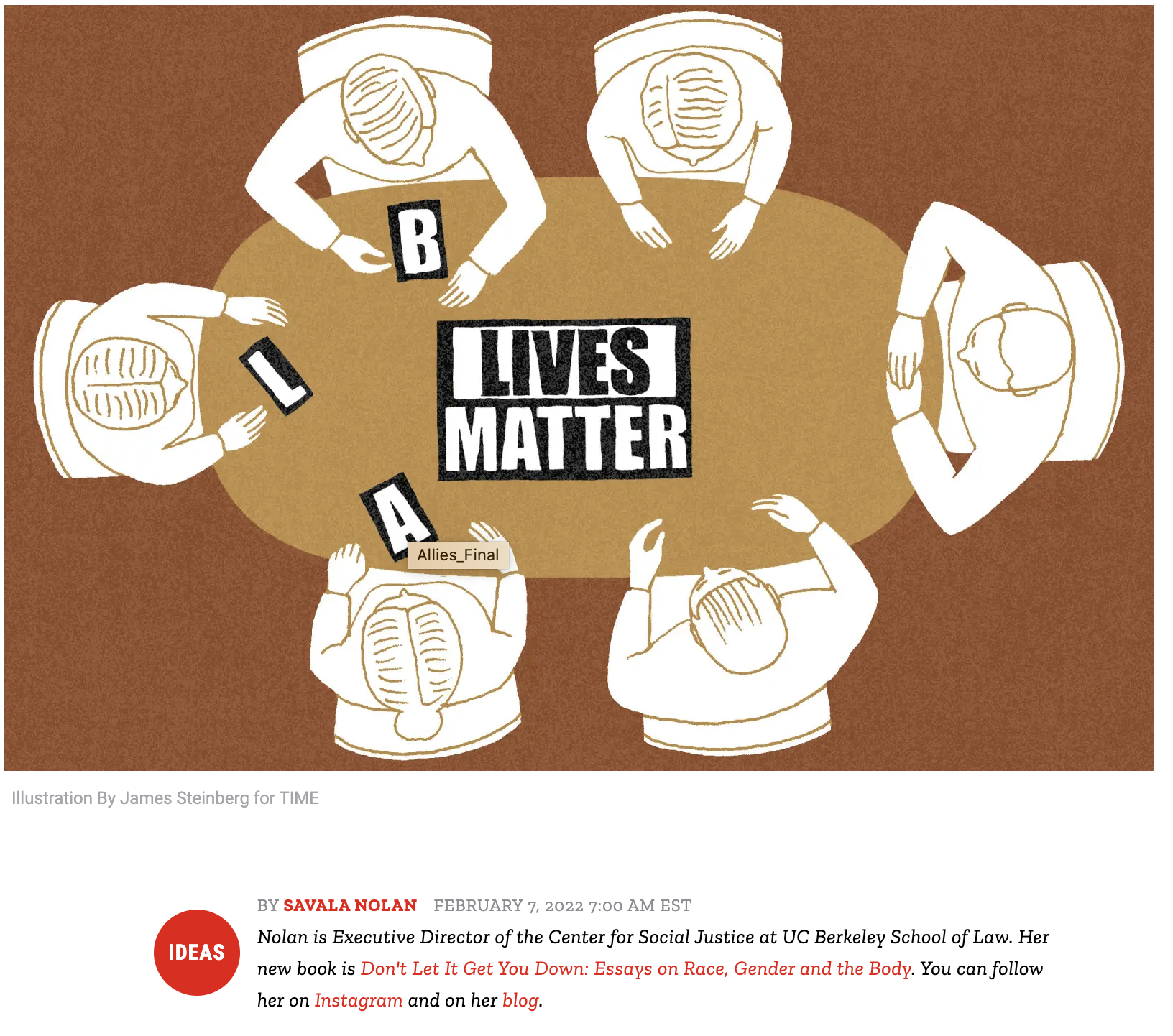 Dr. Nolan is very disappointed in us.

I know a lot of white people. A lifetime of private schools, three years at an elite law school, a job in academia, a house in the suburbs, my own family—I’m surrounded. The vast majority of them are progressive and, as of the last couple years, eager to be allies. They were sickened by George Floyd’s murder. They posted photographs of Breonna Taylor’s gentle, sweet face. They set up recurring donations. They bought books, and they bought them from Black-owned bookstores, and then they read them with pens in their hands. Books like Me and White Supremacy, So You Want to Talk About Race, White Fragility, and The New Jim Crow. They were hellbent on personal transformation, on becoming not merely not racist but anti-racist, not only benign but of benefit. And God bless them for it. I applaud them (silently), and I don’t take their willingness for granted. But, very often, these white people and their efforts disappoint me. They frustrate me. They make me sad.

They disappoint and frustrate and sadden me because their work—as earnest and crucial as it is—frequently fails to demand the participation of the white people with whom they have the tightest, most honest, most intimate relationships. Their husbands, their parents, their wives, their children, their best friends. The people with whom they have the most currency, the most likelihood of creating a long-term trajectory of change. The people who are most exposed and connected to their (racialized) desires and fears, their conscious and unconscious beliefs, their choices and preferences—the heartwood of the very racial hierarchy they say they want to address. Time and again, I’ve observed white people approach “the work” with heartfelt intensity—but no clear, persistent will to spread it to the most significant white people in their lives.

The books she lists, which constitute part of “The Work,” give you an idea of what she is hectoring us about: embracing full-on Critical Race theory.

But The Work is not enough, for it’s only begun when we limit it to ourselves. We need to rope all our white friends into sharing The Work and hence The Guilt—which is the penultimate goal of The Work (The ultimate goal, of course, is power and then reparations.)

I’m not opposed to learning about racism and anti-racism (who would be in these fraught days?), and I devoted a lot of last year to reading about racism before the 1950s—a time when it was much more pernicious than now. I wanted to try to feel how authors like James Baldwin and Richard Wright reacted when they encountered full-on Jim Crow. And I continue to read, but I’m not going to be forced to read books that have the goal of infecting me, a second generation Jew descended from the Ashkenazis of Eastern Europe, with the original sin of guilt. That doesn’t mean I reject anti-racism—only the antiracism of the performative sort that isn’t out for equality, but for self-proclaimed virtue.

So I’m one of the bad ones for Nolan:

Because here’s the truth: whiteness is not a solitary state. Whiteness is a system. Whiteness is a social phenomenon—as in communal, collective, community-based, and often family-based. Whiteness is rooted in relationships. Its rules and benefits are built and transmitted, in ways subtle and overt, between white people. Its habits and behaviors are only so powerful because they’re enacted by many white individuals, together, at the same time and across time. If you want to untangle the net, you have to work in tandem with other white people. A white person who “does the work” in isolation is like a pianist playing in a sealed room. They hear the music, and that’s great. They may be personally transformed—but they shouldn’t expect the world to start dancing.

And so we have is our second task:

. . .They also risk seeing a side of loved ones that they don’t want to see—the side that maybe doesn’t care about their own relationship to white supremacy enough to interrogate it, or is so undereducated that they don’t believe they have a relationship to white supremacy worth investigating. No one wants to peer too deeply into a loved one’s shortcomings. That’s human, and it’s understandable. I myself pick and choose which aspects of white supremacy I am willing to surface when it comes to my white friends and family. But I have to believe that there are white people who resist doing the work when it’s proffered to them by near-strangers, but who, on hearing from a sister or son or spouse that their failure to engage would impact a cherished relationship, just might show up. So why can’t more well-meaning white people insist and demand that their family members join them, or face some consequence? No risk, no reward.

I know that what I’m suggesting—asking for—is going to be unattractive for many white folks. In the microeconomic sense, at least, giving up comfort and privilege chafes against most people’s self-interest. There is little incentive for any white person to insist that another white person address how white supremacy shows up in their lives. There is little reason to risk the harmony in your dearest relationships in the name of something that, you believe, barely even impacts you.

In other words, we must collar all our friends and haul them into The Conversation. (This will do wonders for one’s social life.) And what if they don’t want to have The Conversation? Then we must make them Pay the Price, which means Make them Feel the Guilt:

What should this cost look like? Cutting ties or the silent treatment isn’t realistic, nor is it proportionate, nor, for the most part [JAC: “for the most part!’], desirable. But how about something? How about, for instance, honest, repeated conversations? How about good old-fashioned I-statements, now and again? Such as, “When you mostly ignore opportunities to do anti-racist work, I feel worried that we have a different world view or a different set of values.” Or perhaps, “I know we’ve talked about this before, and you’ll make your own choices about how you spend your time. But when you stay out of this fight, so to speak, I feel surprised and confused. I know you care about justice.” There’s no need for a scorched-earth approach to racial politics, especially between people who love each other. We can be more subtle, more nuanced, and more gracious with each other—even as we hold the line, even as we persist. And by “we,” I mean all of us—but I mostly mean you. White people. Because this is your work. These are your relationships. This thing—whiteness—is yours, not mine. You make it, not me. If you mean well, don’t let someone else’s white apathy make you apathetic.

. . . If we want this cooperative, connective transformation—and I believe we do—it’s time to increase the heat. That increase needs to come from white folks, and it needs to be directed at the white people they love more than anything. It needs to be real, and sustained, and, not to get too misty about it, rooted in love. Love for the relationship (no scorched earth necessary) and love for something bigger. Bigger than power, bigger than privilege, bigger than whiteness. Otherwise, I fear an unabating status quo. I fear a waste of effort and good-will. Many white people are working, but so long as they work without implicating their closest bonds, I fear we’ll lose much of the harvest. We can’t afford that anymore.

Somehow I think that Dr. Nolan has missed the class on “how to win friends and influence people.” Her whole argument is hostile, consisting of “you must agree with me or you’re a bad person” combined with, “and if you do agree with me, then get everybody you know to as well, and punish them if they don’t.”

Now there is something useful in the article, but it boils down to this: “If you see friends being racist, call them out on it.”  Nolan would disagree, for that’s not really what she means. She wants us to get everybody to help us Dismantle the Entire System and sign onto every aspect of Critical Race Theory. And we must be ridden with guilt, for only then can we, and the world, be saved.

I don’t know how to cure the problem of inequality, but I do know that you can’t bully people into it. Can you imagine someone following her script in the Sixties? Well, that’s not the way the Civil Rights bills were passed. It wasn’t guilt—at least not in my view—but the dawning realization that it’s immoral to treat other humans in ways that we wouldn’t want to be treated. It was the sit-ins, the dogs and truncheons and the fire hoses of the other side; the vileness of segregationists like Bull Connor and George Wallace, the killing of Emmett Till, combined with the persuasive powers of Civil Rights leaders. You would never see Dr. King writing an essay like this one. (Well, King’s been press-ganged into posthumous advocacy of CRT, and since he’s dead he’s unable to object.)

This article won’t work for the same reason that Bias Training doesn’t work: it makes people resentful by telling them they’re bad, and it increases the problem by making society more divisive. Of course we have inequality, and of course our Republic can’t hold its head high until we fix it. But trying to remedy it this way is like trying to cure a headache by knocking someone unconscious with a sledgehammer.

If you want to see John McWhorter’s simple tripartite solution to inequality, go here. Maybe it won’t work, but it’s sounds a damn sight more effective than the bullying prescribed by Nolan.

44 thoughts on “Time Magazine tries bullying its readers into Wokeness”