There are apparently a lot of Kiwis who agree with my view that Mātauranga Māori (“MM”), or Maori “ways of knowing”, should not be given coequal status with modern science in science classes. (It should be taught mostly as anthropology or history, with the bits of “practical knowledge” perhaps interpolated in science class.)  This is a losing battle, I know, as are most battles against forms of wokeness, but as a scientist I want to at least make my views known and try to keep science teaching on the rails. Forcing MM—a mixture of legend, theology, morality, mythology, and practical knowledge—into science class constitutes a form of “valorizing the oppressed” by giving them certain rights that make no sense in today’s world. Teaching Māori legends and myths (including creationism) as real science in biology or physics class is one of those “rights” that needs to be ditched.

Nearly every day I get emails from upset Kiwis, some with Māori heritage, who agree with me. After all, no sensible person wants to see science education in their country be watered down this way. But almost all of these people are afraid to speak up publicly or use their names. That’s because questioning the scientific nature of MM is considered a big no-no in New Zealand, and you can lose your job for it. The Royal Society of New Zealand, for instance, is still investigating two of its members for taking the stand I described above.  The disaffected Kiwis write me because I can give voice to their concerns without getting them in trouble.

Another Kiwi sent me the figure below, along with an email. I have permission to quote so long as names aren’t used. Note that this person is a lover of his country and an admirer of the Māori.

This week I was doing some electrical updates, and thought I should first check the NZ regulations for wiring (colors, etc). All very straightforward, and the project was a success. Nonetheless, in light of some of your (absolutely correct) commentary on NZ recently, I thought you might be interested in the attached page from the regulations.  All I can say is ….. wha ????

Having lived overseas for a while, I really cannot comment very knowledgeably on New Zealand’s directions. The day to day celebration of Māori culture, and the things that make NZ so unique, are great, and even my own family use many Māori words in everyday speech that I would not have recognized in my childhood.
But the extension into other areas, such as your observations about science education, and this document I shared, add zero value and smack of opportunistic woke-ism. I simply don’t believe that a young Māori looking to become an electrician would find that path easier by thinking of electrical ground as the realm of some mythological entity.

I put a red box around the relevant bit from the New Zealand Electrical Code of Practice : 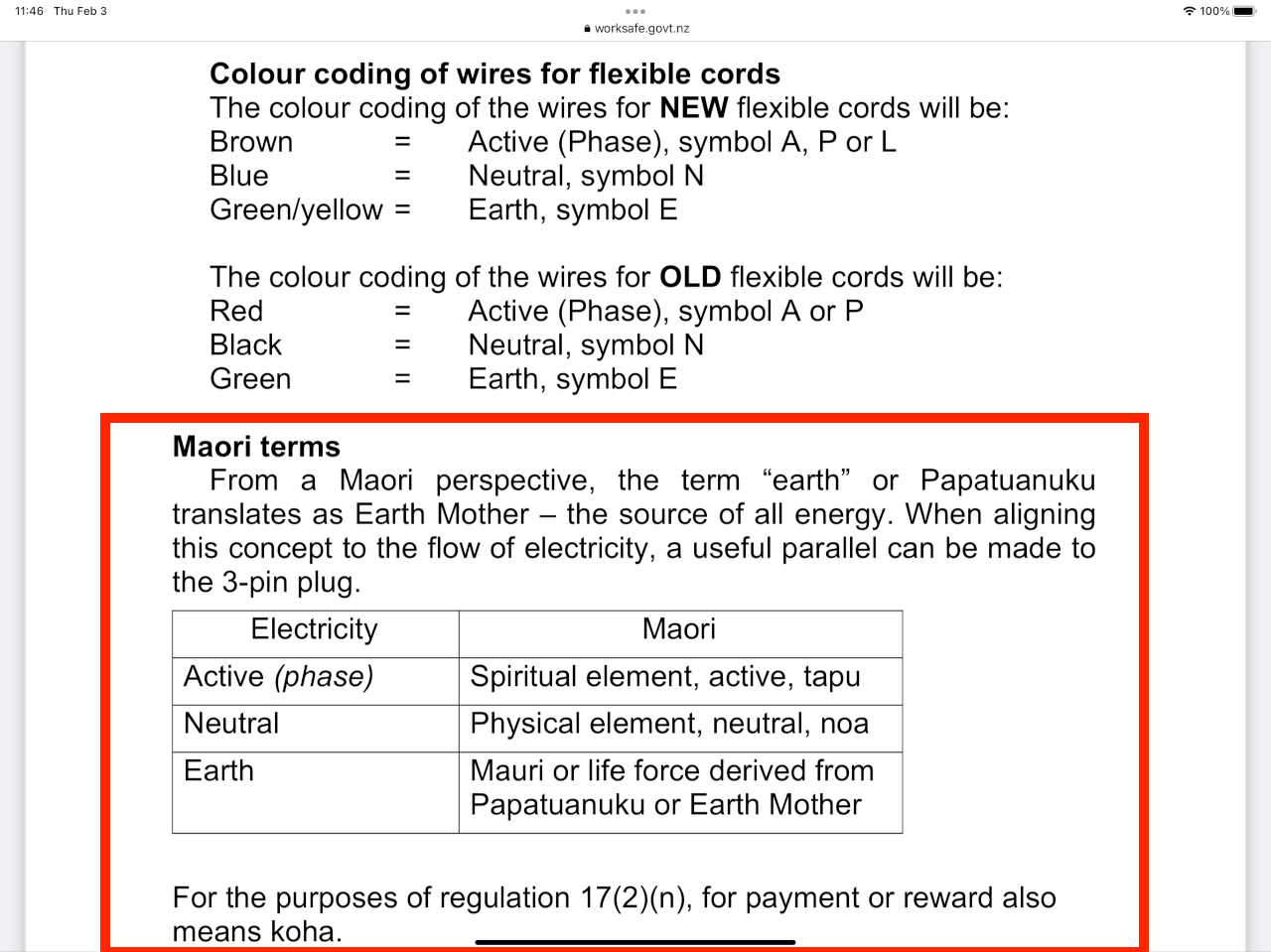 Note that there is nothing helpful or practical in this addition; what it does is analogize the practical instructions for wiring with certain terms from MM. No serious harm is done with this, but I think it shows the fealty to MM that permeates nearly every aspect of NZ life—including wiring. It is in fact kind of funny, but also sad, because it valorizes mythology by adding it to advice for electricians.

I have to add, though, that the person who sent me this stuff has good things to say about his country’s government, and I agree. Not only did they do fantastically well against Covid, but they’re doing a really good job trying to conserve their beleaguered wildlife using modern (not MM) conservation techniques. It’s a beautiful country with lovely people, and I hope to return before too long.

The last bit of the email I got:

Jacinda Arden’s leadership in the early years of her Prime Minstership have been exemplary in terms of standing against COVID and terrorist actions, with a consistency of message and direction sorely lacking in the US and UK.  And for COVID, the result is undeniable:  NZ’s total deaths over 2 years are comparable to a single day in Massachusetts with its similar population. But the challenge for her now is the transition to a re-opened country, and coping with an increasingly frustrated, impatient populace. And it is sorely costing her the polls.