Today’s Jesus and Mo strip, called “ways,” came with the caption, “Sometimes you just have to raise your voice a little.”

I love to ask believers how they know that their religion is the “right” one. The more sophisticated among them will say, “I don’t,” or “It’s all the same god!”  But you know that this is hokum, as Allah is not the same as the Christian God, and religions like Hinduism have multiple gods, some of them nasty.  As for the “I don’t” answer, well, you can then ask why they’re betting eternity on a happenstance of birth or upbringing.

I love the “We cannot understand God’s wisdom” remark, as it’s a ploy to immunize religion against all empirical disconfirmation or prior-reducing. Why does a benevolent god allow young children to get fatal cancers or be born with a fatal deformity?  How does God’s wisdom explain that?

But lest I digress into ranting, I’ll stop.  Oh, one more thing. I still don’t understand why God transformed part of himself into the human Jesus and then had himself tortured and killed, with that killing someone giving humanity the only way to attain eternal salvation. Was that the best plan God could come up with?  The story never made sense to me, and still doesn’t.

Okay, that’s it, except I want to quote the late Victor Stenger on why the existence of God is an empirical question, “The absence of evidence is evidence for absence if that evidence should have been found.” 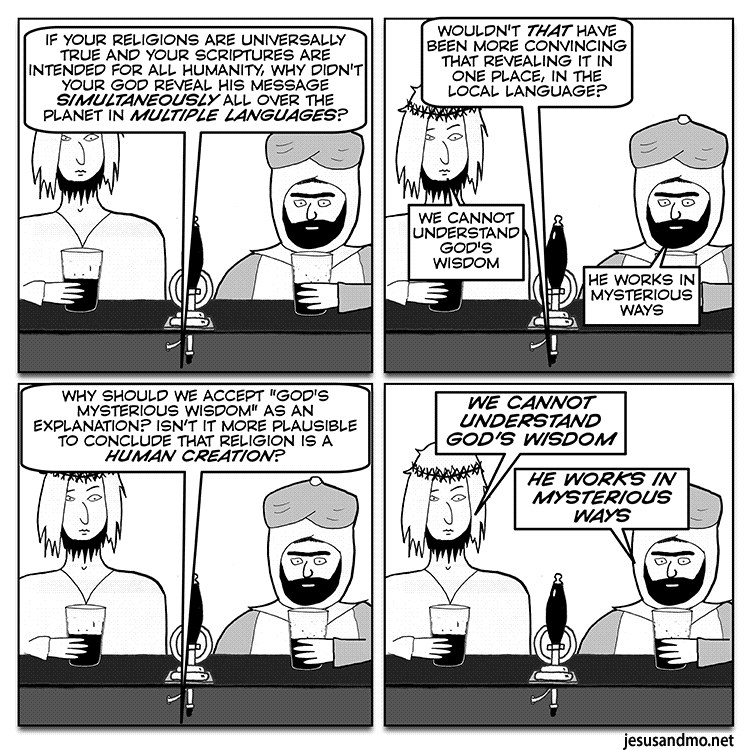