I’ve had my differences with Massimo Pigliucci, but when he says something I agree with, I give him praise (see my kudos here for his admirable critique of panpsychism). So I’m always puzzled when he has to work in a slur against me when we do have our differences.

In this case we don’t seem to have any differences on the topic of free will, but he still insists on characterizing Sam Harris and me as “philosophically naive anti-free will enthusiasts”.  Massimo’s insults usually come in such a form: asserting his superior credentials in either biology or philosophy.  I’m not going to respond by calling him names. It is the argument I want to deal with.

That aside—and the “naive” bit did upset me a tad—Pigliucci argues in the article below that the concept of free will is “incoherent”.  By “incoherent”, he apparently means that “free will in the pure libertarian sense cannot exist because it violates the laws of physics.”  But of course that’s the argument I’ve been making all along, so in fact we agree.  Perhaps the word “incoherent” has a philosophical meaning I don’t fathom (I am, after all, philosophically naive)’ but if people do realize that the libertarian (“I-could-have-chosen-otherwise”) concept of free will adhered to by most people and a large proportion of religious believers cannot be true, I will be happy.

Do note that for a long time I’ve lumped physical determinism together with pure indeterminism (as in quantum mechanics) as “naturalism”. It’s naturalism that puts paid to the libertarian concept of free will, not just determinism.  “Contracausal” free will (another name for “libertarian free will”) would violate the laws of physics, and so can be dismissed. As Sean Carroll showed, there is no way that immaterial “will” can influence physical objects, and we already understand the physics of everyday life. Libertarian free will is not part of everyday life.

Anyway, click below to read Pigliucci’s short essay in “Philosophy as a way of life”: 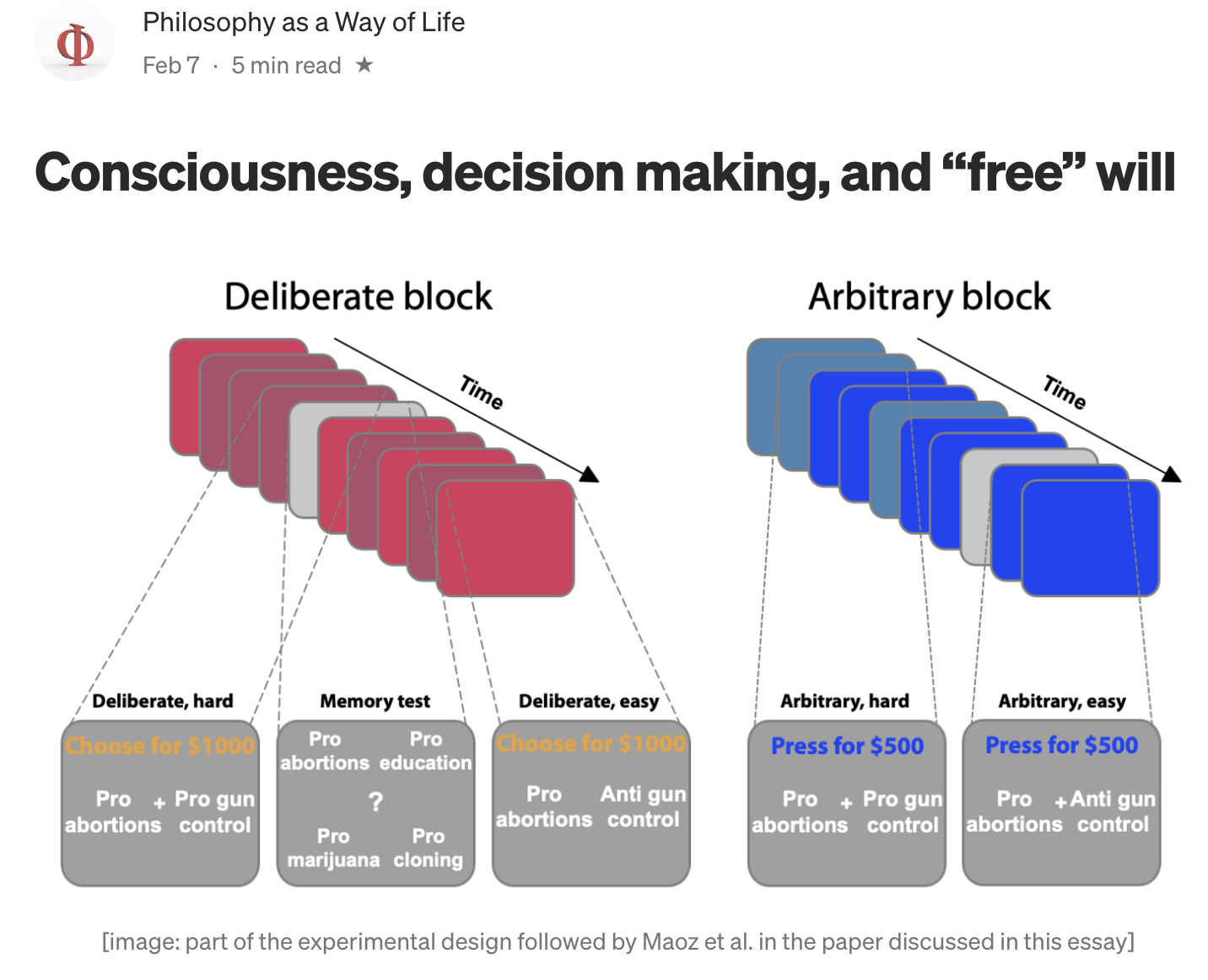 Massimo’s argument seems no different from one I’ve been making for years (it’s not of course my argument; I’m parroting the naturalists who preceded me). A quote:

“Free” will, understood as a will that is independent of causality, does not exist. And it does not exist, contra popular misperception, not because we live in a deterministic universe. Indeed, my understanding is that physicists still haven’t definitively settled whether we do or not. Free will doesn’t exist because it is an incoherent concept, at least in a universe governed by natural law and where there is no room for miracles.

Consider two possibilities: either we live in a deterministic cosmos where cause and effect are universal, or randomness (of the quantum type) is fundamental and the appearance of macroscopic causality results from some sort of (not at all well understood) emergent phenomena.

If we live in a deterministic universe then every action that we initiate is the result of a combination of external (i.e., environmental) and internal (i.e., neurobiological) causes. No “free” will available.

If we live in a fundamentally random universe then at some level our actions are indeterminate, but still not “free,” because that indetermination itself is still the result of the laws of physics. At most, such actions are random.

Either way, no free will.

Note that, as I’ve also maintained (but some readers here don’t) that the popular view of free will is wrong because it violates the laws of physics, including both the deterministic ones and the truly indeterminate but statistical quantum-mechanical ones. (Note that Newtonian mechanics is a special case of quantum mechanics, but determinism suffices for much of everyday life, like sending rockets to the Moon.)

So where is the incoherence here? Massimo’s argument appears to be this (my take):

a. The universe is governed by the laws of physics. The brain is part of the universe and behavior (including “choice”) comes from our brain

b. If the laws are deterministic, we can’t have free will

c. If the laws are indeterministic, we can’t have free will, either, because, according to libertarians, our behaviors are not completely “random” or capricious.

d. Since deterministic and indeterministic laws are all we have, there is no free will, which is seen as independent of the laws of physics.

If that’s “incoherent”, I don’t see why. It’s not a purely philosophical deduction, because determinism and indeterminism are empirical phenomena..  And I’m happy that Massimo agrees that there’s no free will the way most people use the term. At least he doesn’t assert, as compatibilists do, that the popular notion of free will is really a sophisticated Dennett-ian one. Surveys show that that is not true: it’s the libertarian one that both Pigliucci and I say is nonsensical. (Or, in his case, “incoherent.”)

In the rest of the article, Pigliucci discusses the meaning of the Libet experiment as well as interesting newer experiments in which brains are monitored when more complex decisions are made. It turns out that for a simple random decision, like pressing a button or deciding whether to add or subtract, as in Libet’s study, the brain gives a signal before the actor consciously decides what to do. And that signal predicts with substantial accuracy what the actor will do. The predictability has increased as brain monitoring has improved.

Libet also asked participants to watch the second hand of a clock and report its position at the exact moment they felt the conscious will to move their wrist. The idea was to explore the connection between the RP [the “readiness potential” detected in the brain before the actor’s decision comes to his/her consciousness] and conscious decision making.

The results were clear, and have been confirmed multiple times since, using different and improved experimental protocols. Unconscious brain activity, measured by the RP, preceded the conscious decision to move the wrist by at least half a second, with more recent studies putting that figure up to two full seconds.

This was interpreted as to mean that the participants had in fact decided to move their wrist quite some time before they became conscious of their decision. The implication being that consciousness had nothing to do with the decision itself, but was rather an after-the-fact interpretation by the subjects.

Philosophically naive anti-free will enthusiasts like Sam Harris and Jerry Coyne, among others, eventually started using the Libet experiments as scientific proof that free will is an illusion. But since free will is incoherent, as I’ve argued before, we need no experiment to establish that it doesn’t exist. What Libet’s findings seemed to indicate, rather, is the surprising fact that volition doesn’t require consciousness.

I don’t in fact remember using the Libet experiments as “scientific proof that free will is an illusion.” You can rule out libertarian free will, as I do when I talk about the subject, from the laws of physics alone, using exactly the same argument that Pigliucci does. What I do say is that insofar as the popular conception of free will requires a conscious decision, it doesn’t seem to work, as consciousness is temporally  decoupled from choice, which can be predicted  with substantial but not perfect accuracy from brain scans before the conscious choice is made.. Again, we have pilpul: a distinction without a difference.

The stuff in Massimo’s piece that interested me was his discussion of a paper that I haven’t read for a while:

Enter a pivotal paper published by U. Maoz, G. Yaffe, C. Koch, and L. Mudrik in 2019 in the journal eLife Neuroscience and entitled “Neural precursors of decisions that matter — an ERP study of deliberate and arbitrary choice.”

The authors set up a series of conditions that allowed them to distinguish between what was happening in the brains of people asked to engage in arbitrary decision making (similar to the original Libet experiment) or in deliberate choices (the latter characterized by different degree of difficulty).

The results were highly informative. They did detect the RP, but only in association with arbitrary, not deliberate decision making. In other words, Libet’s results do not extend to situations when people engage in conscious decisions, and therefore it has nothing to do with the debate on volition.

Maoz and collaborators also built a theoretical model that was able to nicely match the experimental results. On the basis of their model, they suggest that — contra the common view regarding the RP — where arbitrary decisions are concerned “the threshold crossing leading to response onset is largely determined by spontaneous subthreshold fluctuations of the neural activity.” That is, the RP goes up and down randomly until it crosses a threshold that leads to action, in the case of the original experiment, the flicking of the wrist.

That’s interesting, though Maoz et al., while able to make a model of what happened, couldn’t suss out what the “decision” would be using their models or the measurement methods (EEG). That doesn’t of course mean that researchers with more knowledge of the brain, couldn’t eventually find a way to predict what decision a person could make before it’s made.

But even if it’s made at the very last second, it doesn’t matter. The whole process of deliberation and “decision” in complex tasks is analogous to the working of a giant computer made of meat. There are inputs, they work through the neurons, and we spit out an “output”: a decision. That decision is still not “free” in the sense that it could have been “made” (via volition) in a different way. That decision still reflects the deterministic or fundamentally indeterministic laws of physics, and is not made independently of them. If the decision could have been otherwise, it could only be because an electron jumped a different way, not because the actor willed a different outcome. (We still don’t know, and I doubt, that quantum-mechanical indeterminacy really does show its effects in the way people behave.)

But the end, as Massimo says, “Either way, no free will.”

Neuroscience and our understanding of how we act as we do is a hard but fascinating subject, and experiments like the one above are essential in understanding behavior. But we’re a very, very long way from working out the physical basis for “choice.”

Massimo ends his article this way:

Research like the one conducted by Maoz and colleagues opens fascinating insights into a real scientific question: how do human beings make conscious decisions? The other question, regarding free will, is a non-issue because free will cannot possibly exist in a universe with laws of nature and no miracles. It follows that there is nothing at all that neuroscience can say about it.

I don’t agree. Free will is not a non-issue, and we know that because many people accept it. For them it is an issue! They accept it because they don’t understand physics, because they embrace duality, or because they believe in God and miracles. You can’t dismiss all those people, for they are the ones who make and enforce laws and punishments based on their misunderstanding that we have libertarian free will. They are the ones who put people to death because, they think, those criminals could have chosen not to pull the trigger.

I agree that there’s little that neuroscience can say about free will, but it can say this: Because neurons are material objects that obey the laws of physics, we cannot have free will. That is not “nothing”!

The rest is commentary—and a lot of hard work.

Oh, and Massimo, if you’re reading this, could you just be civil and lay off the insults? I may be philosophically naive, but I can still understand what you’re saying and can still learn from your arguments.

56 thoughts on “Massimo Pigliucci: “Free will is incoherent””