UPDATE: Go here for an amusing but also distressing analysis of how the BBC reported the situation. Below is a BBC tweet which stayed up for five hours after the scare quotes around “hostage” became superfluous. 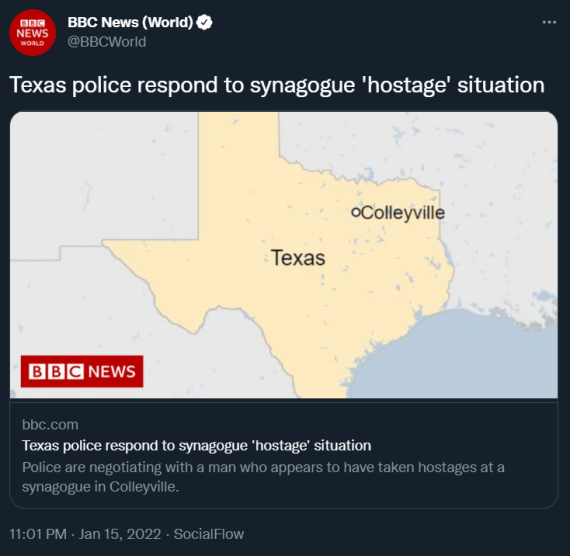 I’ve recently pondered de-subscribing from Bari Weiss’s Substack site, Common Sense, as the overwhelming majority article weren’t by Ms. Weiss herself, and I didn’t subscribe to read 90% of the pieces written by others, although many were good.

But today’s column is evidence that Weiss still has it, “it” being the ability to write a passionate and absorbing column when something gets her juices flowing. In this case it’s the hostage situation in Texas, where a devout Pakistani/British Muslim named Malik Faisal Akdram took four worshipers (including a rabbi) hostage in a synagogue.  Most escaped through a fire door, and a SWAT team then rushed in and killed Akdram. Based on his desire to be a martyr (saying he wished he was on one of the 9-11 planes), his religion, the fact that he attacked a synagogue, that he demanded the release of Aafia Siddiqui, a rabid anti-Semite in an American prison for attempted murder, be set free, how can you deny that hatred of Jews was part of this? Akdram even asked the rabbi in Texas to call a rabbi in New York, asking the NY rebbe to get Sidiqui set free. (I suppose Akdram thought that Jews are so all-powerful in America that a New York Rabbi can get a murderer freed!

And, like Weiss (click to read below; I think it’s free), I’m angrier than I am about previous attacks on Jews, though less sorrowful since nobody was murdered. Why? Because I watched the media in real time (except for the right-wing media) do its best to whitewash the story, arguing that it was not an attack targeting Jews (sure—the guy was walking down the street in a small Texas town with guns and saw a synagogue and thought, “Hey, that’s a good place to take hostages!”), and it was not motivated by anti-Semitism.  Even some on this site have tried to exculpate the left-wing media for its timorous coverage of the situation, even though papers like the New York Times have a long history of distorting the news to favor Palestinians and to demonize Jews.

And even Joe Biden, at the time when his own National Security advisor said that the attack was one of terrorism and anti-Semitism, was arguing, despite all the known facts, that there was no evidence for anti-Semitism. Does the murderer have to scream “Kill the Jews” to make his motivations plausible? If you read this site, you’ll know that I often withhold judgement on hate crimes, but this case was an exception given the “facts on the ground.”

But mainly, I am angry because attacks on Jews seem to get objective news coverage (and public sympathy) in America only if two things hold:

a.) The murderer has to be of the right sort: preferably a white supremacist or right-winger.  If an African-American attacks Jews, as they did so often in the last few years in NYC, that fact is to be covered up.

b.) The victims have to be of the right sort. Nice clean-shaven white people, like those at the Tree of Life Synagogue, can be mourned. Hasids with beards and furry hats—forget about it!

In other words, the situation has to meet the Approved Narrative to be newsworthy.

And this is the conclusion that Weiss has also arrived at. Her piece is well worth reading. I’ll quote bits of it.

Weiss recounts three attacks on Jews. The first was largely ignored because the murders were of the wrong sort: African-Americans.

I first felt that sinking realization three years ago on a freezing day in Jersey City. If you don’t think “Jews” when you hear that place name, it’s because the murder of Jews that happened there in 2019 did not inspire the same national solidarity that enveloped Pittsburgh.

On December 10 that year, David Anderson and Francine Graham shot up a kosher supermarket on a street named for the Rev. Dr. Martin Luther King, killing three people in the process. We were very lucky the toll wasn’t higher. Just to the left of the supermarket is a cheder, a school for Jewish children. Federal officials discovered a bomb in the killers’ van powerful enough to kill and maim people five football fields away.

The pair hated cops and they hated Jews, a sentiment apparently driven by the twisted ideology of the Black Hebrew Israelites, who believe that they are the real Jews and that the real Jews are pretenders. Jews are “imposters who inhabit synagogues of Satan,” Anderson wrote on social media. “They stole our heritage, they stole our birthright” Anderson said, before he murdered a young mother named Mindy Ferencz, a young man named Moshe Deutsch, and a 49-year-old Ecuadorian clerk who worked at the deli, Douglas Miguel Rodriguez. (They murdered a police officer and father of five named Joseph Seals earlier in the day.)

The day after the shooting, I went to the supermarket to do some reporting for a column I expected to publish. Unlike in Pittsburgh, there was not a single flower or condolence card. Just broken glass, and Hasidic Jews working with construction workers to board up the ransacked building, which was riddled with bullet holes. There were no television cameras.

No one in my social media feeds, to say nothing of mainstream reporters, wanted to look very hard at the killers’ motives or at the responses among some members of the community. In one video I came across, a local woman said that her “children are stuck at school because of Jew shenanigans. They are the problem . . .  I blame the Jews. We never had a shooting like this until they came.”

Then the Tree of Life shooting, which killed eleven and injured six. Murderer: the right sort: a white nationalist anti-Semite. The murdered: also the right sort, upper-middle-class Jews. The media lapped up the story like a cat drinking cream. The narrative was correct.

When eleven Jews who look like me were shot by a white supremacist in Pittsburgh, it was a clean story. Here was unadulterated evil mowing down the innocent. But Jews dressed in black hats and strange clothes with obscure accents? The ones in Jersey City or in Monsey or Crown Heights or Williamsburg or Borough Park?

And then the latest incident, where, thank goodness, no innocent people were murdered. Weiss floats the idea that “heavenly miracles” might have been involved (I’m pretty sure she’s a religious, God-worshiping Jew), and adds that “all the Jews I know—even the atheists—are thanking God.” Nope, I’m not one of them. And if God intervened to save four Texas Jews, why did he let eleven Pittsburgh Jews be murdered?

As with Andrew Sullivan, Weiss’s Achilles heel is her unevidenced (and I’d say irrational) belief in a deity. She doesn’t seem to realize that you can be a Jew and an atheist, too—it’s the only religion that has a secular, cultural version.

But that’s a trivial beef with her pieces. She’s telling the truth here while the rest of the Left-wing media tied itself in knots to avoid admitting the obvious. Why? Because Akdram was the wrong kind of criminal. He was of Pakistani descent, ergo a person of color, ergo incapable of racism. See here for more background on Akdram and how some British Muslims are calling him a martyr.

One more quote (and a Tweet) and I’ll close. Biden, who’s edging ever closer to Rashida Tlaib, Alexandria Ocasio-Cortez and the whole BDS-loving, Zionism-hating band of “progressive Democrats”, didn’t behave particularly well, either:

Perhaps it’s unfair to single out the AP when the special agent in charge of the FBI Dallas Field Office had this to say: “We do believe from our engagement with this subject that he was singularly focused on one issue, and it was not specifically related to the Jewish community, but we are continuing to work to find the motive.”

Imagine the FBI suggesting, in the wake of the murder of nine black parishioners at Emanuel African Methodist Episcopal Church by Dylann Roof, that it wasn’t specifically related to the black community.

National Security Advisor Jake Sullivan did call the event an “act of terrorism” and an “act of antisemitism” on television this Sunday. But his notable exception proves the rule. His boss, President Joe Biden, could not manage to describe what any normal person could see:

Biden: "I don't think there is sufficient information to know why he targeted that synagogue why he insisted on the release of someone who's been in prison for over 10 years… why he was using anti-Semitic & anti-Israeli comments." pic.twitter.com/cOxRB1xLvq

As I said, it’s pretty clear what happened. If Biden said anything, though, he should have kept his gob shut. But now is the time should speak up; perhaps he already has. I hope so.

I’ll finish with two good quotes from Weiss, one at the beginning of her piece and the other at the end:

What I now see is this: In America captured by tribalism and dehumanization, in an America swept up by ideologies that pit us against one another in a zero-sum game, in an America enthralled with the poisonous idea that some groups matter more than others, not all Jews—and not all Jewish victims—are treated equally. What seems to matter most to media pundits and politicians is not the Jews themselves, but the identities of their attackers.

. . .Today is Martin Luther King Day and I’m thinking of his understanding that the demand for equal treatment comes at no one’s expense because justice is not a zero-sum game. “We refuse to believe that there are insufficient funds in the great vaults of opportunity in this Nation,” he said. “When the architects of our republic wrote the magnificent words of the Constitution and the Declaration of Independence, they were signing a promissory note to which every American was to fall heir. This note was a promise that all men—black men as well as white men—would be guaranteed the unalienable rights of life, liberty, and the pursuit of happiness.”

Jews thrived in an America that had confidence in its goodness. Jews are not safe—no one is—in one which does not.

This woman can write. I wish she’d write more often. And though I’m not religious like she, I can at least thank Ceiling Cat that someone can say the truth about this without getting fired from the New York Times.

48 thoughts on “Bari is back: Weiss on the Texas hostage situation and what the reaction means”