Why should we care about the performance of New Zealand’s primary- and secondary-school students, and what’s happening with it over time? For me, it’s the science that’s important, but science, reading, and math show the same trend over the last fifteen years. Despite a rise in spending per pupil over the last 25 years, performance in these three areas in New Zealand has declined, both absolutely and in comparison to the countries like England, Australia, the U.S., Canada, and Singapore—countries regarded as educational competitors with (and comparable to) New Zealand.

Why does this matter? For science, at least, as I’ve written repeatedly, there’s a big-time initiative in New Zealand to have mātauranga Māori, or Māori “ways of knowing”, taught as coequal to modern science in the science classroom. This initiative, propelled by the desire to buttress an oppressed minority (the native Māori), has good intentions behind it—to get more Māori interested in science—but is a practical disaster. That’s because mātauranga Māori is not only “traditional practical knowledge” (e.g., navigation, growing crops, catching fish), which can be considered “science construed broadly” (but do you need to teach this in science class?) but, worse, a mixture of legends, myths, morality, and philosophy, some of which is palpably false. Much of it is simply not science as the modern world knows it.

Mātauranga Māori involves, for instance, straight-up creationism of life and the cosmos. You can imagine if students are taught that falsehood alongside biological evolution in class. The teacher, of course, wouldn’t be allowed to say that the mātauranga Māori version is false, for that is disparaging the indigenous people.

What will happen if mātauranga Māori is taught as coequal to and as good as modern science is that both Māori and non-Māori students will get confused about science, and performance on international tests will decline. In fact, it’s been declining for some tme, so now is not the time to drag any traditional “ways of knowing” into the science class.

Here I’ll document briefly the absolute and relative decline of student performance in reading, math, and science since the mid-1990s in New Zealand (henceforth NZ). The article below, which I’ve been referred to repeatedly when inquiring, has the data for these three areas; it’s from the New Zealand Initiative, which characterizes itself as “New Zealand’s leading think tank”:

This is what The New Zealand Initiative is all about. We are the organisation to sketch pathways towards a better future. Our mission is to help create a competitive, open and dynamic economy and a free, prosperous, fair, and cohesive society.

As New Zealand’s leading think tank, we work closely with our members, policymakers across the political spectrum, the wider business community, the media, academics and the general public.

Our researchers conduct independent research on a wide range of policy issues. From education to economic policy, from poverty to housing, and from local government to immigration, we are injecting new ideas into New Zealand’s political debates.

We are strictly non-partisan in our work and welcome an open exchange of views and ideas. The results of our research are made available to the public, free of charge, on our website.

Click on the screenshot to read the article, and you can also download a pdf.  Both of the authors work for the Initiative.

I’ll just show a bunch of graphs. First, the conclusion and the three tests used:

The analysis shows that both primary and secondary students’ performance has declined over recent decades. As a result, our international rankings in reading, maths and science have slipped, in some cases markedly. At the same time, New Zealand’s per-pupil education spending on primary and secondary students has increased substantially, both in absolute and relative terms.

It appears our additional investment has not borne fruit, and we should not necessarily expect it will in the future. Indeed, OECD analysis suggests there is virtually no relationship between per-pupil spending and achievement beyond a certain level of spending, a level New Zealand has surpassed. Educational performance.

. . . The three international education surveys used in this report to study and discern patterns in New Zealand’s educational performance are the Progress in International Reading Literacy Study (PIRLS); the Trends in Mathematics and Science Study (TIMSS); and the Programme for International Student Assessment (PISA).

There’s also the NCEA, or National Certificate of Educational Achievement, an internal certification which I presume is equivalent to graduating from American high school with a given ranking. The three ranks are, in descending achievement, 1, 2, and 3.  As the government qualification body states, “NCEA Level 2 has become an important and well-regarded qualification and is often a necessary requirement for the entry-level of jobs.” That’s why they use level 2 in the last figure below.

The National Certificate of Educational Achievement (NCEA) is the main national qualification for secondary school students in New Zealand.

NCEA is recognised by employers, and used for selection by universities and polytechnics, both in New Zealand and overseas.

On to the time graph of performance relative to other countries (Singapore is always tops):

Reading literacy. Note that New Zealand has dropped over 15 years, and is now lowest of all six countries compared: 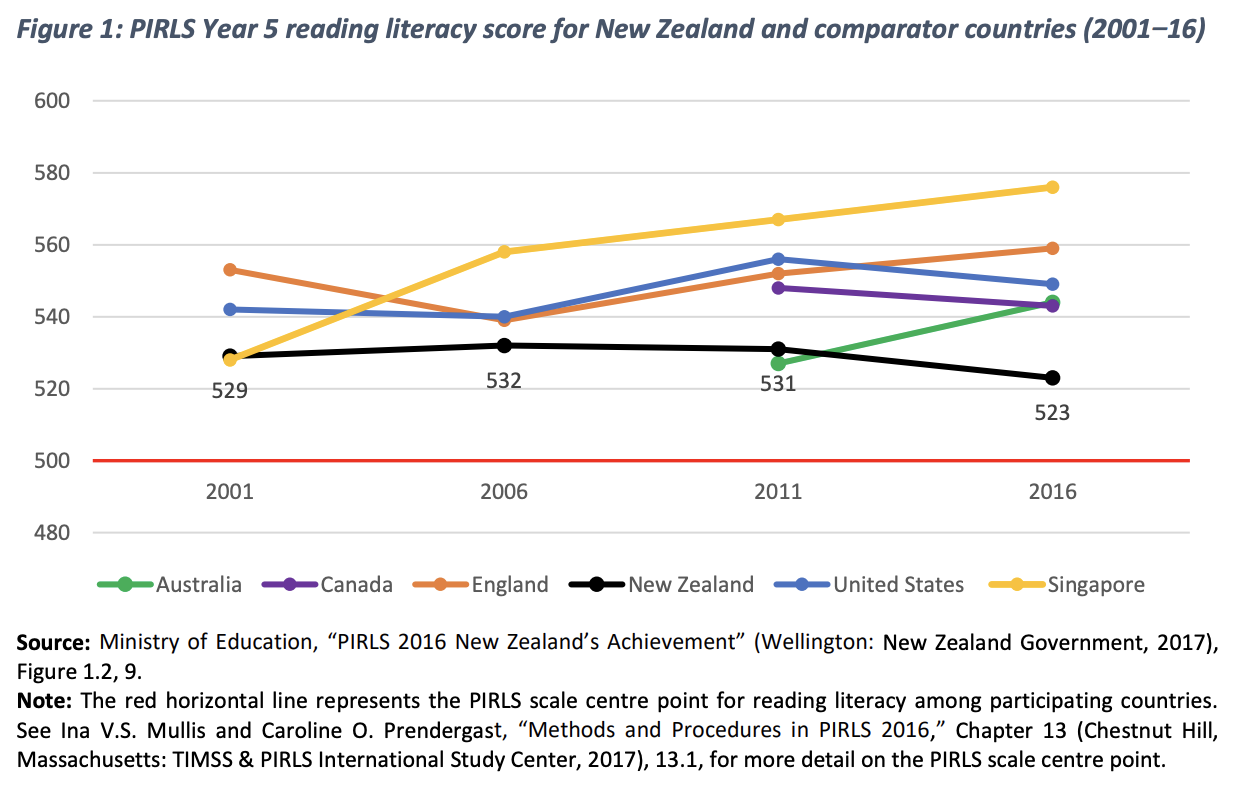 Math and science achievement in New Zealand itself over 24 years. Both rose compared to the 1995 time point, but then have fallen (science more than math) between 2003 and 2019. Remember, this is not a comparison with other countries, but still uses an internationally standardized test: 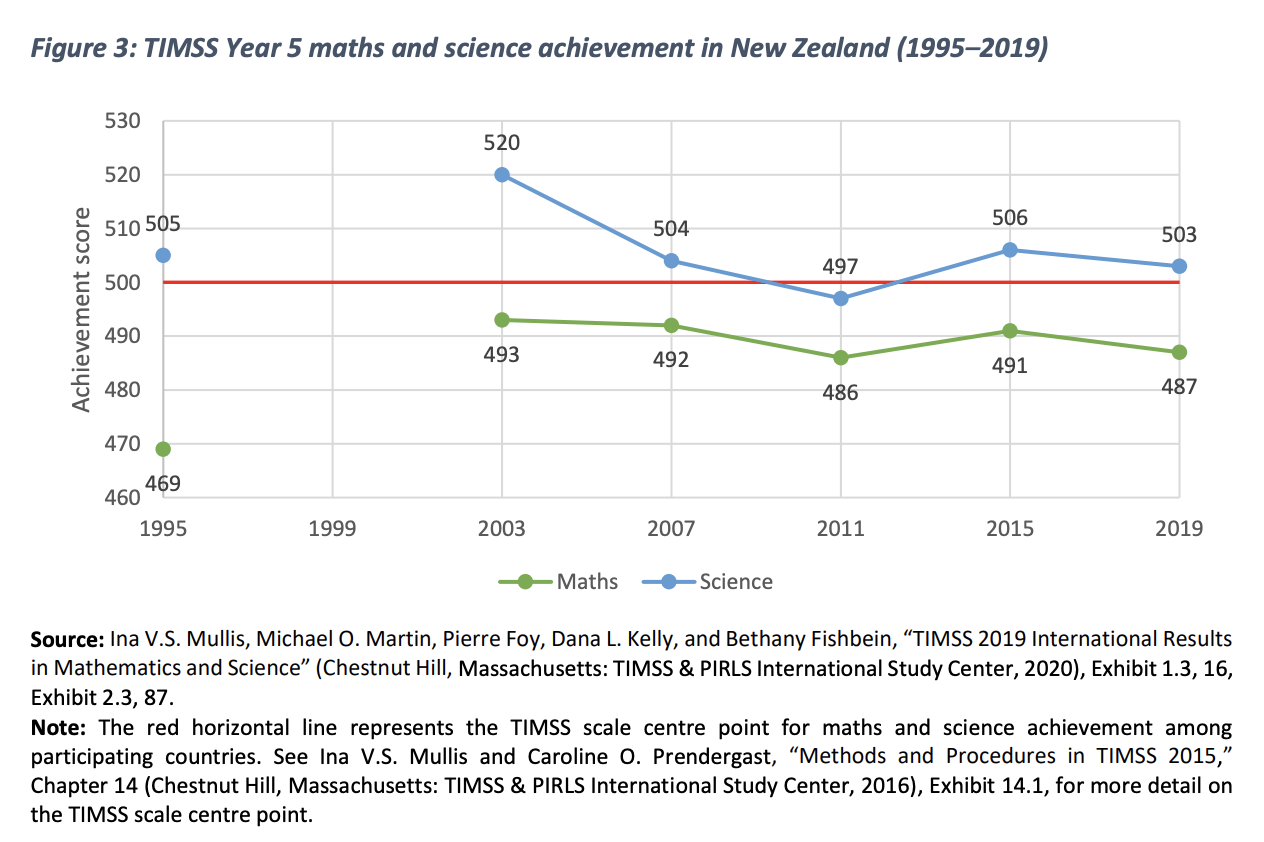 This is the most depressing: a fall in year 11 (near the end of school) achievement in reading, science and math on an internationally standardized test: 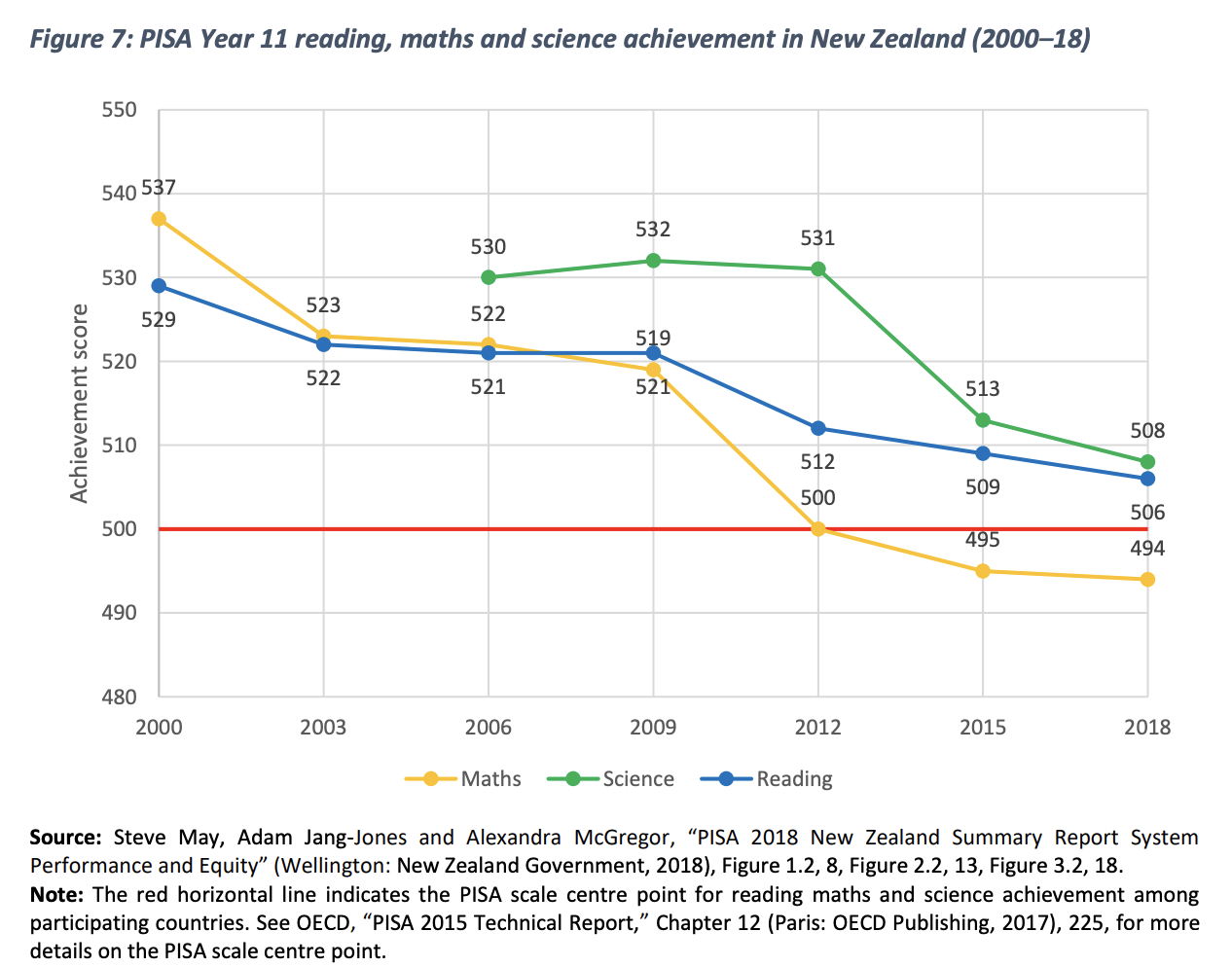 This has happened despite a fairly hefty rise in per-capita spending per pupal in NZ. Throwing money at schools doesn’t guarantee higher achievement. 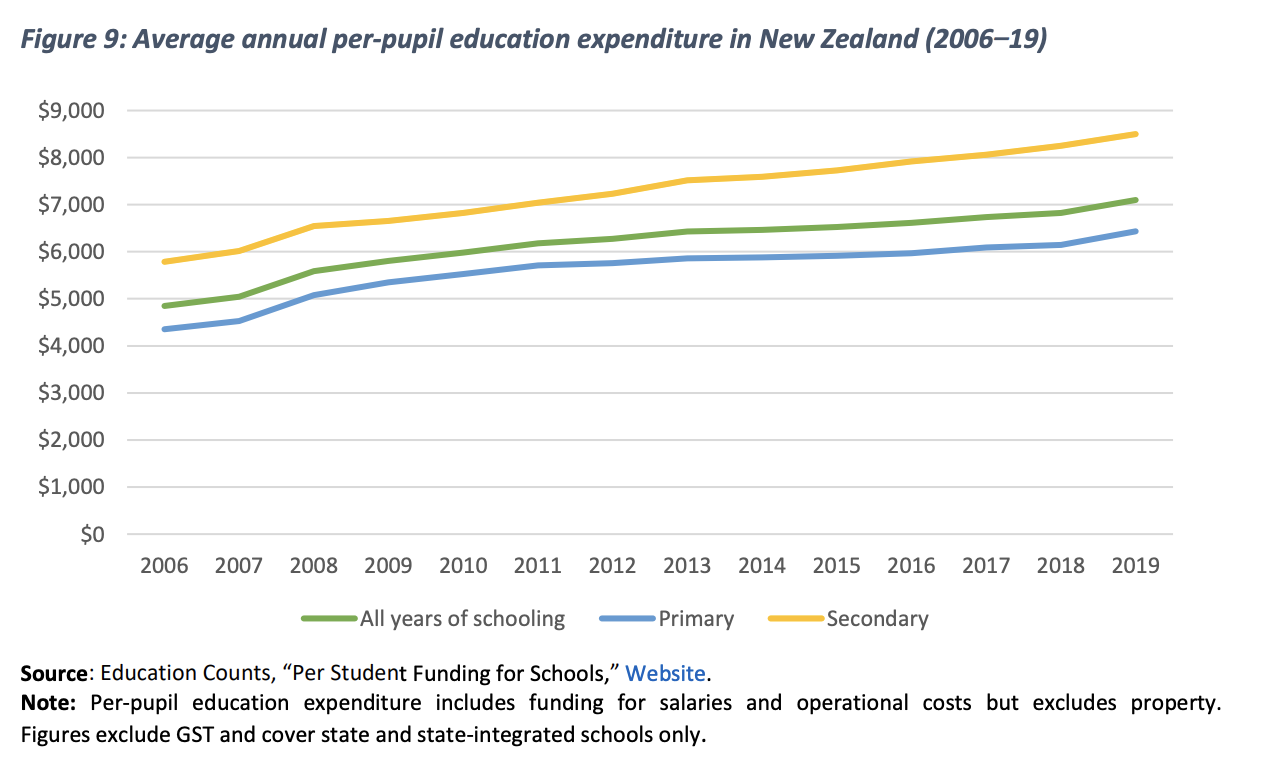 Finally, the most depressing graph at all, showing that while NZ has dropped in reading, science, and math on international tests, the percentage of students leaving school with their NCEA certificates at level 2 or better (1) has grown from nearly 60% to 80% in the last 17 years. You’d conclude from the red line that student performance has increased, but what’s probably happened is that the NCEA standards have decreased at the same time that NZ students are doing worse in its constituent parts when assessed using international tests: 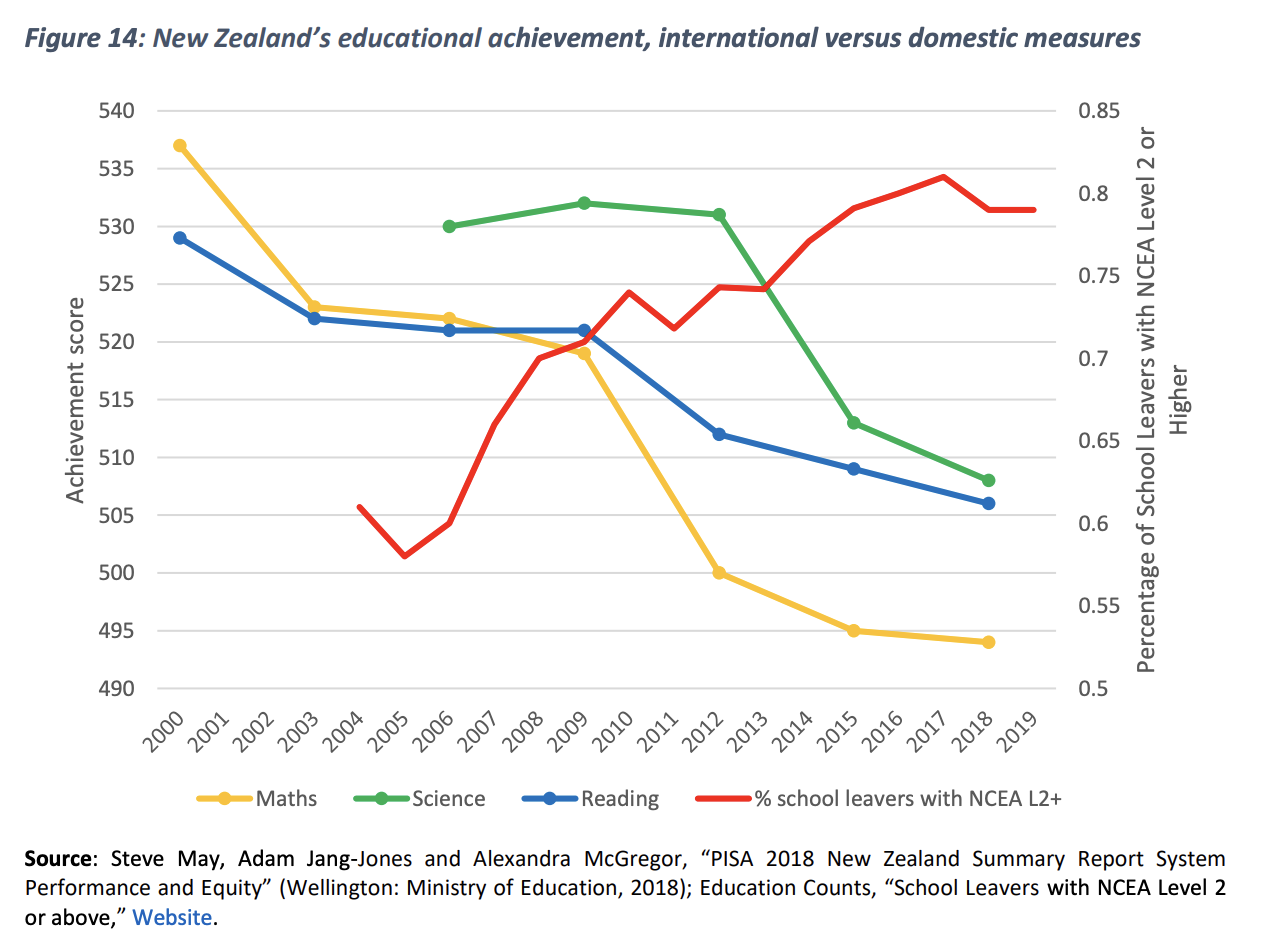 There are a lot more data in the report, with comparisons of many other countries besides the six above.

Why has this happened? Well, the summary piece from the Initiative below (click on screenshot) suggests that the rise of student-centered educational design—that is, teaching what the students demand to be taught (or not taught)—had led to the decline. (Click on screenshot).

Over the past few decades, the national curriculum and assessment have turned the school system into an experiment in child-centred orthodoxy.

The philosophy has changed everything from what is taught to the teacher’s role in the classroom. It has transformed the purpose of school.

By appealing to the inarguable idea that children should be at the centre of decisions about their learning, children-centred orthodoxy has undermined subject knowledge. It has told teachers they are at their most professional when they let their students lead.

Consequently, educational standards have plummeted. Despite a 32% real rise in per-pupil spending since 2001, students have gone from world-leading to decidedly average.

In reading, maths and science students now perform far worse than the previous generation just eighteen years ago. In all three subjects, 15-year-olds have lost the equivalent of between three and six terms’ worth of schooling. Far fewer pupils today perform at the highest levels. Far more lack the most basic proficiency.

Worse, in the latest round of OECD testing, New Zealand recorded the strongest relationship between socioeconomic background and educational performance of all its comparator English-speaking countries.

Lipson then reproduces the last figure above and says this:

Yet, without these international metrics, there would be no way to see this systemic failure. In fact, so strong is the grip of child-centred orthodoxy that the data from the national assessment, NCEA, shows the opposite.

Now I don’t know enough about NZ schools to tell if Lipson is right. What is important for our purpose is this:

Proficiency in reading, math, and science in NZ has been dropping over two decades.  Teaching mātauranga Māori in science class as a “way of knowing” coequal to modern science is a recipe for disaster, driving science scores even lower in internationally standardized tests.

People of New Zealand: do you want your future citizens to be far less literate in science than they are now?