As I’ve noted before, seven professors at the University of Auckland signed a letter in the weekly magazine The Listener that criticized the governments’ and universities’ plans to teach the indigenous Māori “way of knowing,” mātauranga Māori, as equivalent to modern science, though the Māori “way of knowing” includes elements of the supernatural, myths, some practical knowledge, and so on. You can see the Listener letter here, here or here, and I’ll quote briefly from it:

A recent report from a Government NCEA working group on proposed changes to the Māori school curriculum aims “to esure parity for with the other bodies of knowledge credentialed by NCEA (particularly Western/Pakeha epistemologies)”. It includes the following description as part of a new course: “It promotes discussion and analysis of the ways in which science has been used to support the dominance of Eurocentric views (among which, its use as a a rationale for colonisation of Māori and the suppression of Māori knowledge); and the notion that science is a Western European invention and itself evidence of European dominance over Māori and other indigenous peoples.”

. . . Indigenous knowledge is critical for the preservation and perpetuation of culture and local practices, and plays key roles in management and policy. However, in the discovery of empirical, universal truths, it falls far short of what we can define as science itself.

To accept it as the equivalent of science is to patronise and fail indigenous populations; better to ensure that everyone participates in the world’s scientific enterprises. Indigenous knowledge may indeed help advance scientific knowledge in some ways, but it is not science.

This is pretty innocuous—unless you’re a Kiwi. For many Kiwis see all things Māori as inherently good (they are seen as an “oppressed minority”, which they were), ergo mātauranga Māori is valid science and should be taught as such in science classes—both in secondary schools and colleges (“tertiary schools”). The seven signers of the letter, three of them members of New Zealand’s Royal Society (one now deceased), were vilified widely, and I’ve written about that before. The Royal Society itself issued a statement criticizing the professors, and has launched an investigation of the two remaining signatories in the Academy, Robert Nola and Garth Cooper (Cooper is at least a quarter Māori). Nola and Cooper could be booted out of the RSNZ for simply exercising free speech, which apparently is not “free” in New Zealand if it casts doubt on the truth of Māori mythology. Here’s part of the RSNZ’s statement:

The Society is deeply proud of the rich variety of outstanding work being undertaken across Aotearoa at present. In the past year alone, this includes Distinguished Professor Brian Boyd’s literary scholarship (winner of the 2020 Rutherford Medal), the work of Te Pūnaha Matatini on COVID-19 modelling by 2020 Te Puiaki Pūtaiao Matua a Te Pirimia Prime Minister’s Science Prize Winner (led by Professor Shaun Hendy), and the knowledge sharing of Matariki by Professor Rangi Matamua.

The Society supports all New Zealanders to explore, discover and share knowledge.

The recent suggestion by a group of University of Auckland academics that mātauranga Māori is not a valid truth is utterly rejected by Royal Society Te Apārangi. The Society strongly upholds the value of mātauranga Māori and rejects the narrow and outmoded definition of science outlined in The Listener – Letter to the Editor.

It deeply regrets the harm such a misguided view can cause.

If you read the original letter, you’ll see how weaselly this statement is. It’s simply an act of cowardice performed in deference to the Māori people and their supporters who were offended. Yes, Māori myths and legends are of anthropological interest, and their practical knowledge can be valuable, but none of that should be taking up time in science class. There are other venues for teaching it. And to demonize professors for holding that view is beyond the pale, and an embarrassment to New Zealand academics and science in particular.

Defenders of the “Satanic Seven” have been few in New Zealand, simply because Kiwi academics could be fired or demoted for defending science over myth, and so they keep their gobs shut. (There’s no First Amendment in New Zealand.) Further, the country is especially woke with respect to its indigenous population, so there’s been precious little criticism of the Royal Society in the press (or the University of Auckland, which also issued a statement demonizing the signers of the Listener letter, though the Vice-Chancellor has backed off a bit). Criticism has come mainly from outside the country, and you can see some examples here from places like the Times of London or the Daily Mail.  Richard Dawkins issued a few tweets excoriating the coequal “science” initiative.

Now the Chief Executive of New Zealand’s Royal Society, Paul Atkins, has issued another weaselly statement (click to access announcement and to enlarge): 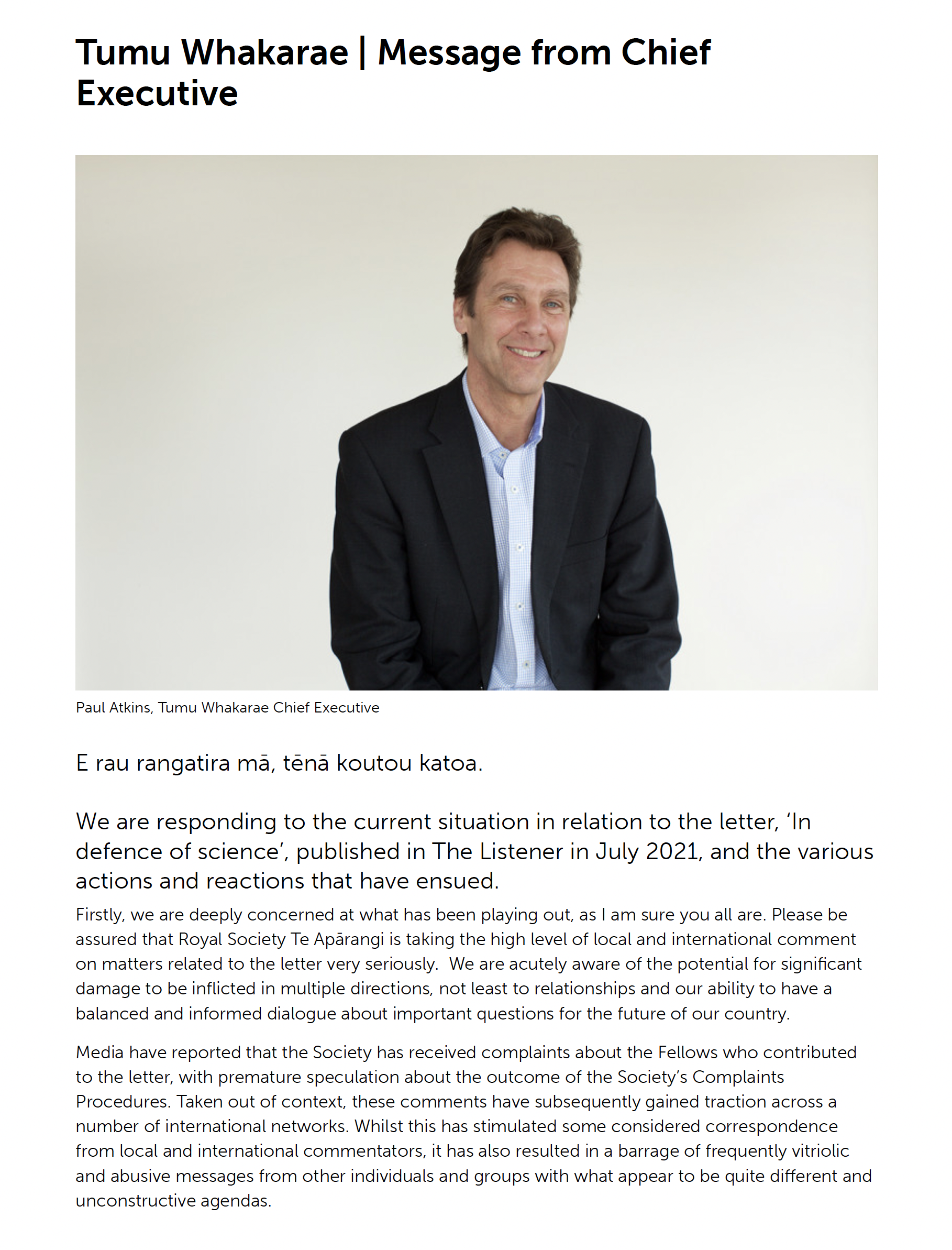 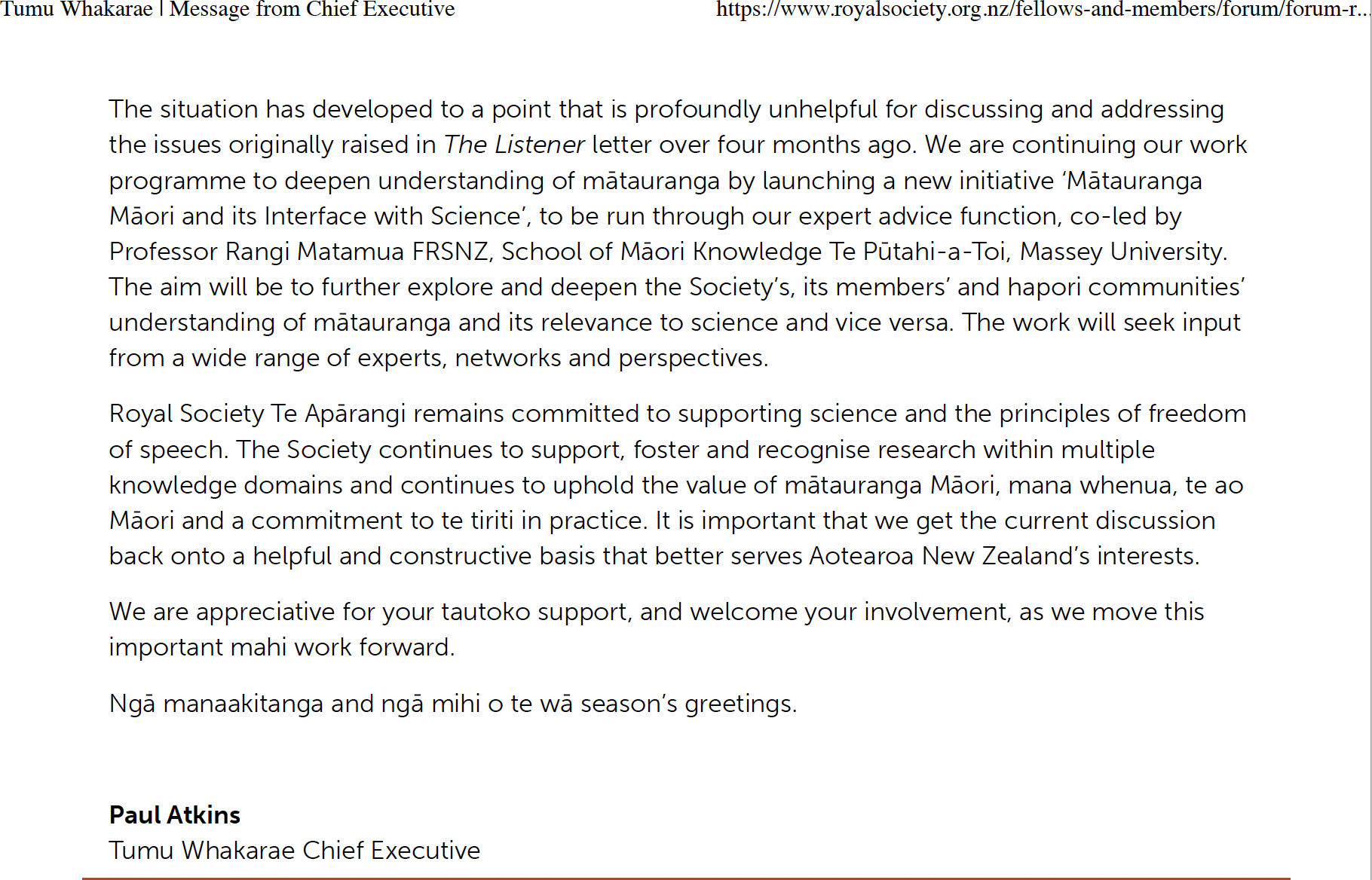 This conflagration, which Atkins appears to deplore, is absolutely predictable, and although the Listener letter started it, it was a petition by 2,000 Kiwis, including many academics, and the outcry against the Listener letter on social media, that fueled all the rancor. He’s beefing because the pushback from overseas and from people like Richard Dawkins put the RSNZ in a bad light.

What you should notice here (beside the Maori words, which make it hard for a foreigners to understand), is this bit:

“Media have reported that the Society has received complaints about the Fellows who contributed to the letter, with premature speculation about the outcome of the Society’s Complaints Procedures. Taken out of context, these comments have subsequently gained traction across a number of international networks.”

How should we envision, then, the “context” provided by RSNZ’s initial denunciation of the letter, a denunciation that remains on their website today? Is this what Atkins feels helped “get the current discussion back onto a helpful and constructive basis that better serves Aotearoa New Zealand’s interests“? Atkins has some chutzpah!

Note as well that the RSNZ is firmly supportive of inculcating indigenous ways of knowing into science, and to “uphold the value of mātauranga Māori“.  It’s absolutely clear to me that the government, the Royal Society, and universities in New Zealand are already deeply committed to teaching mātauranga Māori as coequal with modern science in science classes, and documents I’ll show in later posts will support this. New Zealand is on an unstoppable train that leads to Bad Science City.

As for “supporting science and the principles of freedom of speech,” well, that’s bogus too. Two signers of the Listener letter, faculty at the University of Auckand, have, according to public documents, been penalized—almost surely for putting their names to that letter.

The first report comes from this article by John Ross in the Times Higher Education Section (click on screenshot, you can register for free):

Here you can see this:

For Auckland fish ecologist Kendall Clements, co-authoring the letter in The Listener may have taken a professional toll. Within 12 days of the letter’s publication, Clements was removed from two collaboratively taught ecology and evolution courses that he had helped deliver for years. And while an email criticising the authors was distributed to staff and graduate students in the School of Biological Sciences, [Garth] Cooper’s attempt to respond through the same channel was blocked.

The university says the school email distribution list was “not the appropriate medium” for this type of debate, so its moderators were told not to allow further emails on the topic. And Clements’ teaching duties were changed to balance his workload after another academic’s departure, “and to ensure that the best teaching teams were in place to deliver all courses. The Listener letter was a catalyst for actioning this, but not for the decision.”

Clements says many academics have privately thanked him for voicing concerns that they share but are afraid to express. He says he supports the inclusion of mātauranga Māori elements when they can clearly add value – in subjects on overfishing or tree preservation, for example – but questions their relevance to things like DNA replication.

Actually,I know Clements, and he’s not really a fish ecologist but an evolutionary ecologist. But no matter. Note that Cooper was publicly criticized in his department via email, but wasn’t allowed to respond. Their explanation is unconvincing, as is the claim that The Listener letter played any role in changing his courses. Why should it? That makes me suspect that yes, changing his courseload was a punishment for signing the letter.
And another signer, Professor Douglas Elliffe of Auckland’s School of Psychology, also took a hit, as reported in this issue of New Zealand Political Research (click on the screenshot, the letter is a rare local defense of the Satanic Seven and a rare criticism teaching mātauranga Māori as equivalent to modern science):

An excerpt (my bolding)

In our democratic nation we should be allowed to enter into a rational debate on the role of mātauranga Māori in our society when it impacts on other cultures, and indeed on any other knowledge or way of knowing (indigenous or not) and its relationship with modern science. The Tertiary Education Act 1989 (section 161) provides for:

. . . the freedom of academic staff and students, within the law, to question and test received wisdom, to put forward new ideas and to state controversial or unpopular opinions.

However, in the ensuing public debate the professors have been accused variously of racism, protection of privilege and of advancing a narrow and outmoded view of science. Subsequently, Professor Douglas Elliffe resigned as an Acting Dean at the University of Auckland in order to calm inflamed feelings within the University and the Science Faculty.

Now I don’t know Dr. Elliffe and haven’t communicated with him, but I’ll bet that he was somehow forced to resign. That’s because it’s said he did it to “calm inflamed feelings”. My own guess, for which I have no evidence, is that the “inflamed faculty” made his continuing deanship an insupportable position.

It seems clear that Clements was punished for signing the letter to The Listener (the “catalyst”) and I suspect Elliffe could not continue as Acting Dean because he faced so much opposition within his division.  I’ll try to find out more. The upshot is that two people have lost portions of their appointments after signing the letter to The Listener. My guess is that these losses reflect punishment by the woke.

Stay tuned. We have more on this controversy (but not today).  New Zealand science is heading off the rails.

32 thoughts on “Royal Society of New Zealand responds to complaints about investigations of its fellows’ free speech; and two science-supporting academics apparently get punished for their free speech”