Our tank is diminishing, so please think of this website when you ponder your photos. In other words, SEND ‘EM IN.

Today we have photos of several species from Emilio D’alise. I’ve indented his captions, and you can enlarge the photos by clicking on them.

This moth was photographed while it sat just under the handle of our screen door in Kailua Kona, Hawaiʻi. It was there when we left in the morning, and was still there when we returned in the late afternoon.

That is the oleander hawk-moth is also known as the army green moth because of the camouflage-like coloring. There are a few mainland moths that are similar in color but not shape, and a few that are similar in shape but not color. It’s native of African and Asia, but it was introduced in Hawaiʻi in the 1970’s to control oleander plants and to pollinate certain endangered plants. It’s also seen in certain parts of Europe, England, and as far north as Scotland (although rare).

It’s said to thrive in warm climate dense lush green foliage so I’m not sure how England and Scotland qualify—but there you have it. 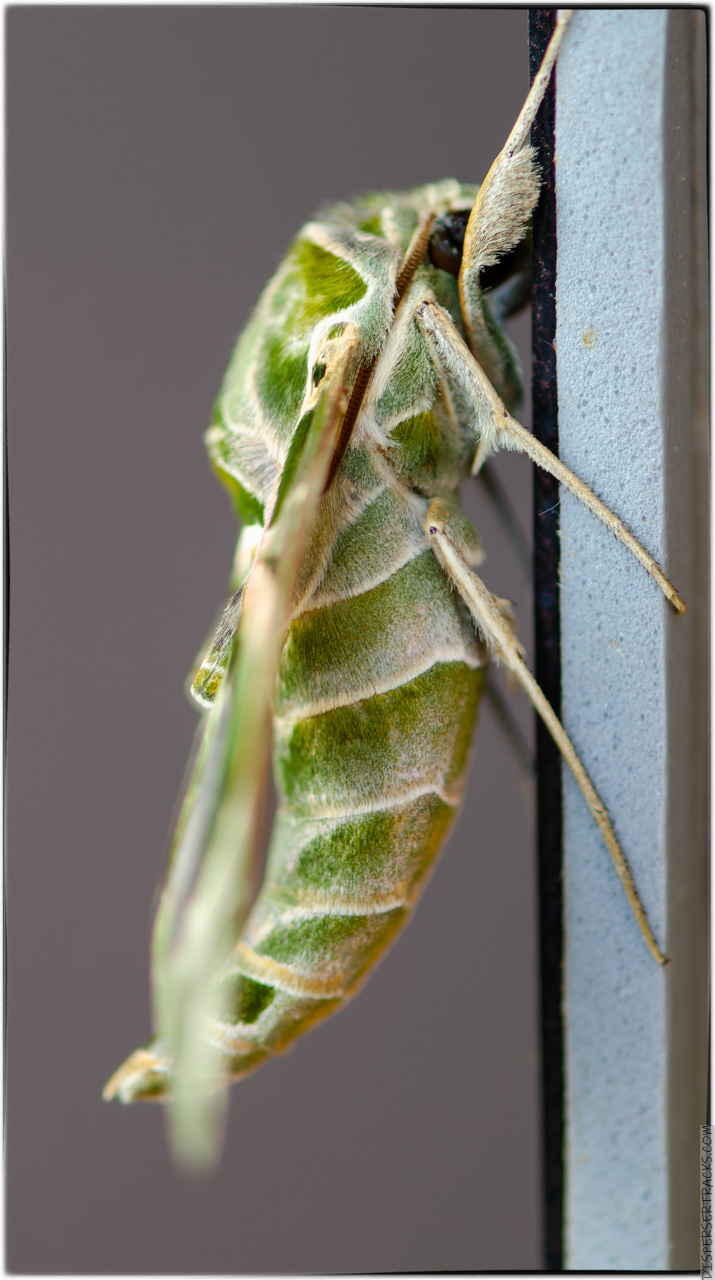 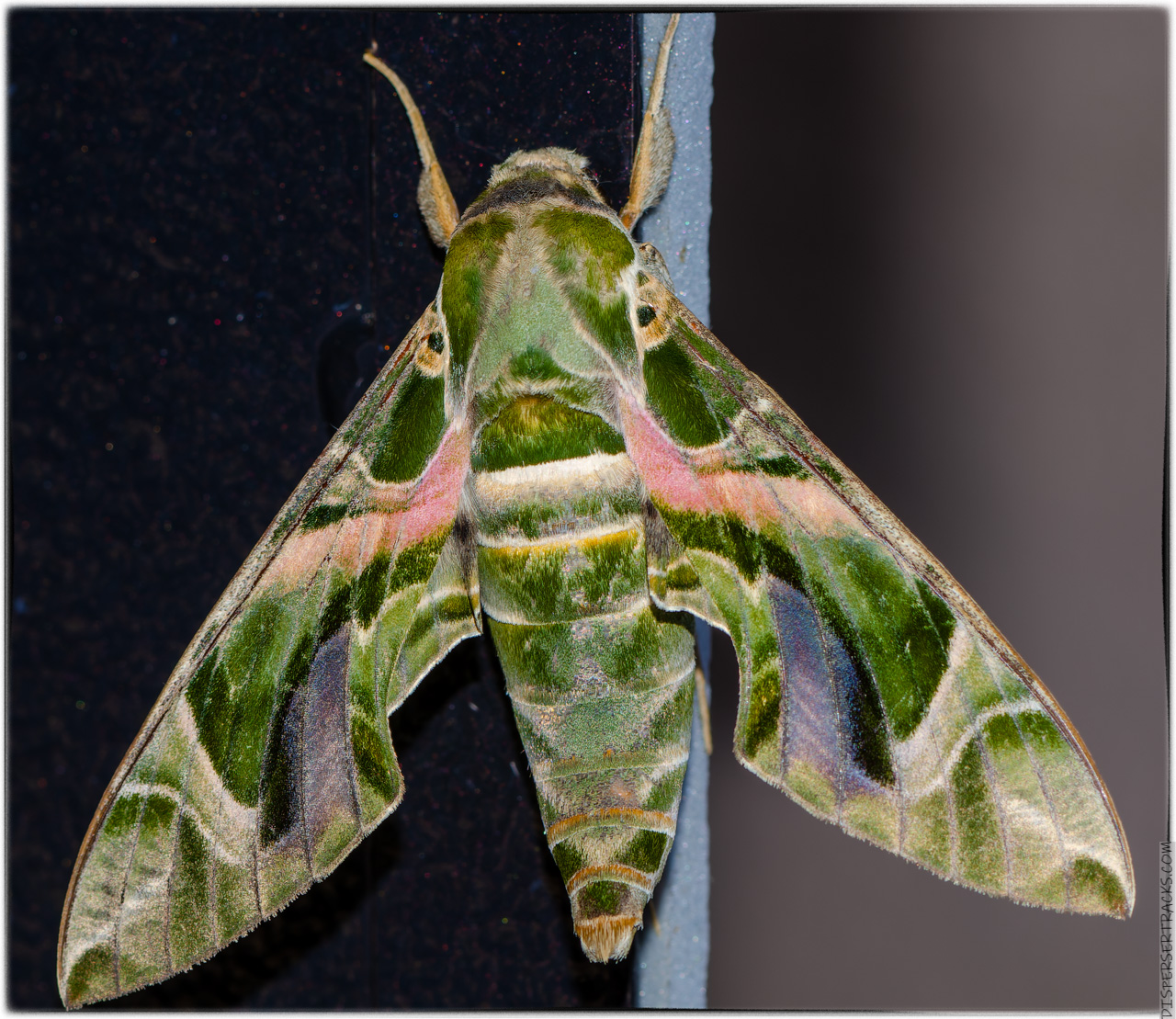 This particular moth was photographed in Woodland Park, CO.

Glover’s Silk moth looks a lot like the Cecropia Moth (also known as the Robin moth), with subtle differences between the two. I found conflicting sources as to whether this moth is itself a Hyalophora subspecies, or a subspecies of the  Hyalophora columbia (Columbia Silk Moth).

Regardless, this is one striking moth with a wingspan of up to 5″. This particular specimen was on the ground on a sidewalk outside the office where I was working, and I was concerned it would get trampled. It turns out these moths — and maybe all moths — are fairly tolerant of people trying to get them to move. It did eventually move after I stopped trying to get it to move.  Apparently, moths can be as obstinate as people. 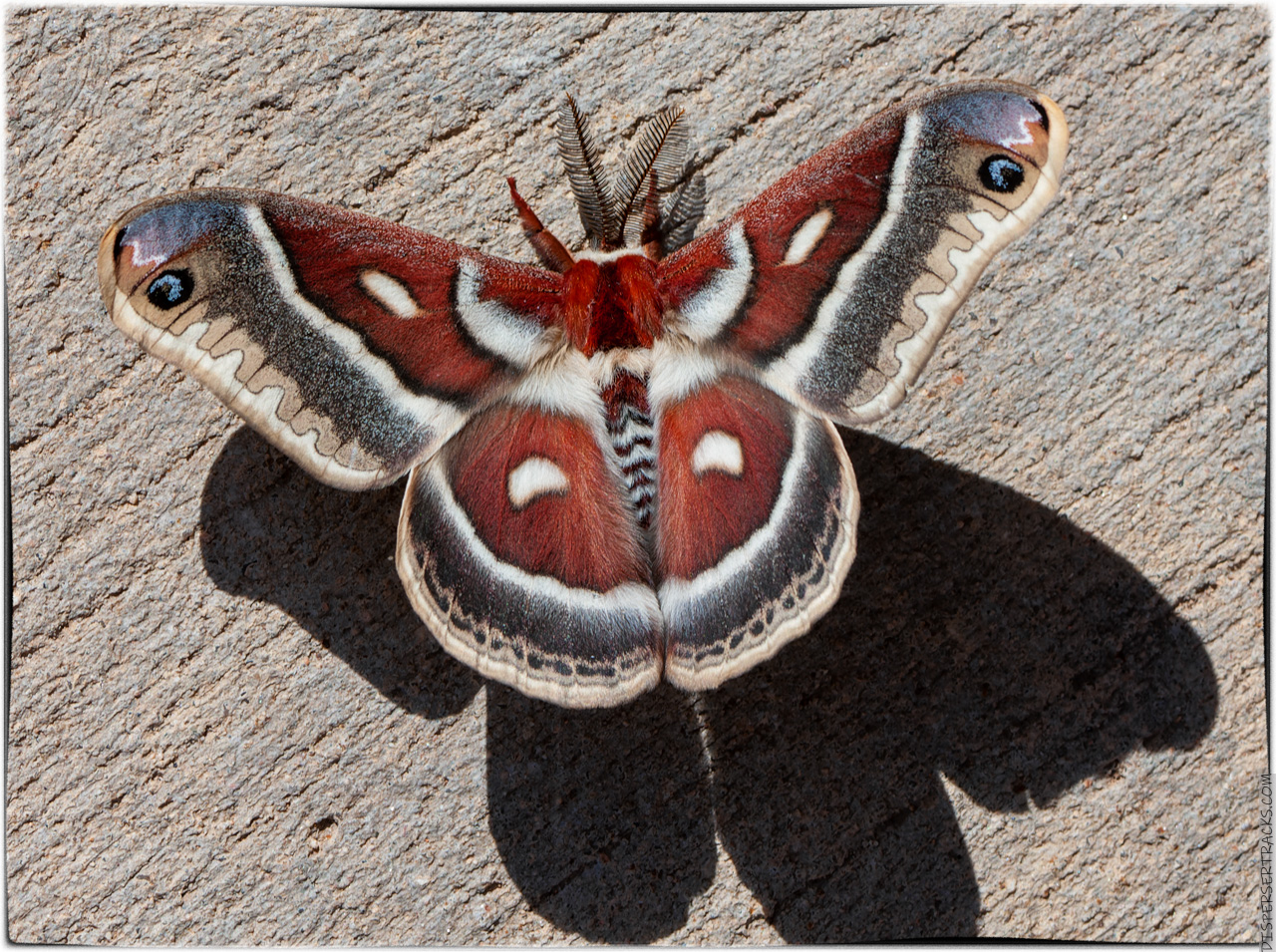 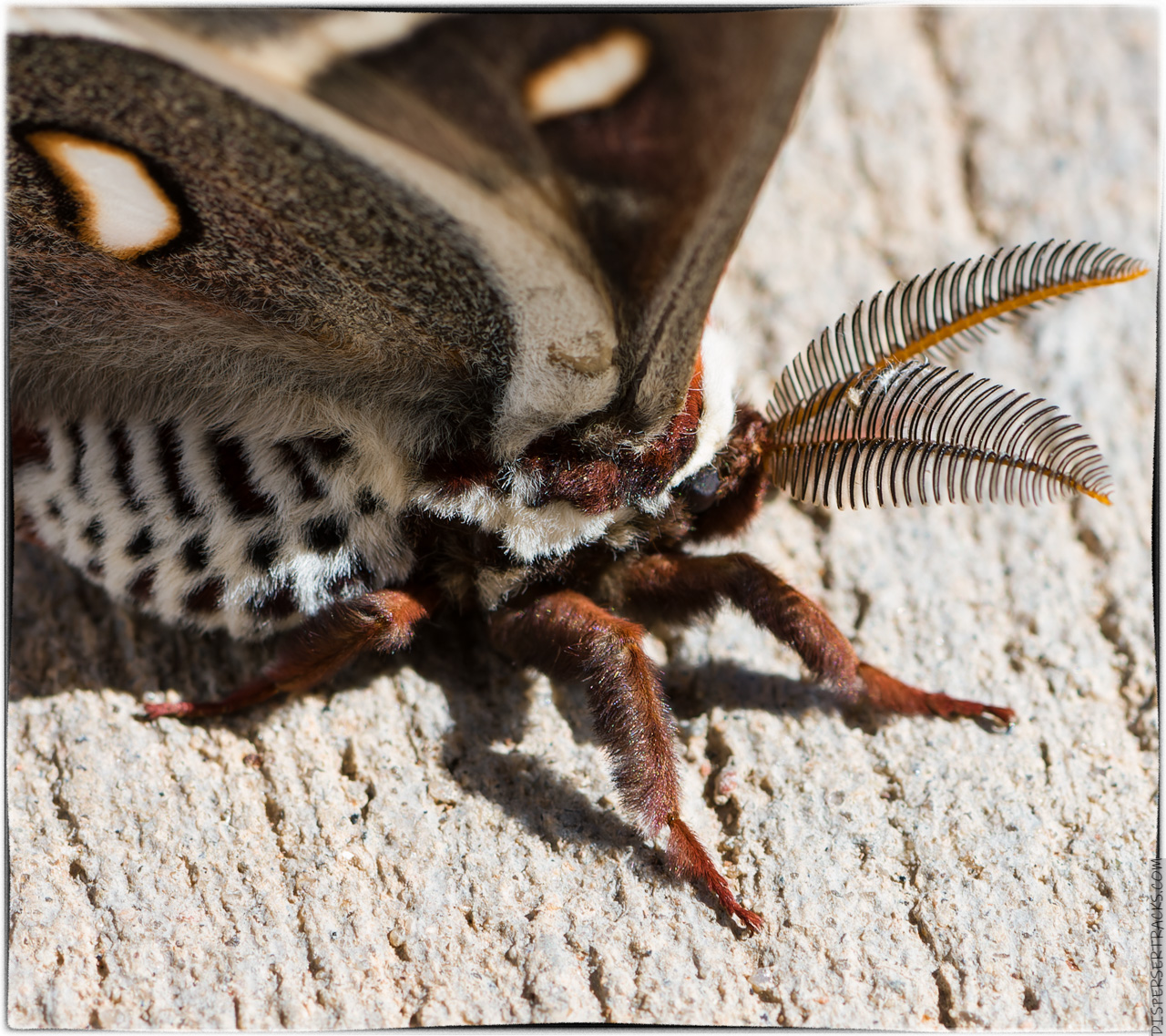 Despite the number of these spiders I saw, I didn’t get many good photos. That’s because vegetation grows vigorously in Hawaiʻi and many of the specimens I saw were out of my reach. Gardens and resort grounds tend to be trimmed and maintained regularly so there’s not as much opportunity to see these in more accessible environments. They’re probably around and near people’s homes, but I try not to trespass just for the sake of a photo. This photo was taken at a state park and it shows the underside of the spider (I couldn’t get to the other side).

The females are said to reach 2.5 inches in size, but I remember them looking bigger. Their webs have a distinctive zig-zag pattern which some believe functions as a warning to birds so that the web doesn’t get damaged. Others theorize it stabilizes the web during windy conditions.

I remember reading that these spiders destroy and recreate their web each night, but I’m not reading that in any of my current resources, so I don’t know if it’s a false memory I’m conflating with the behavior of some other spider. 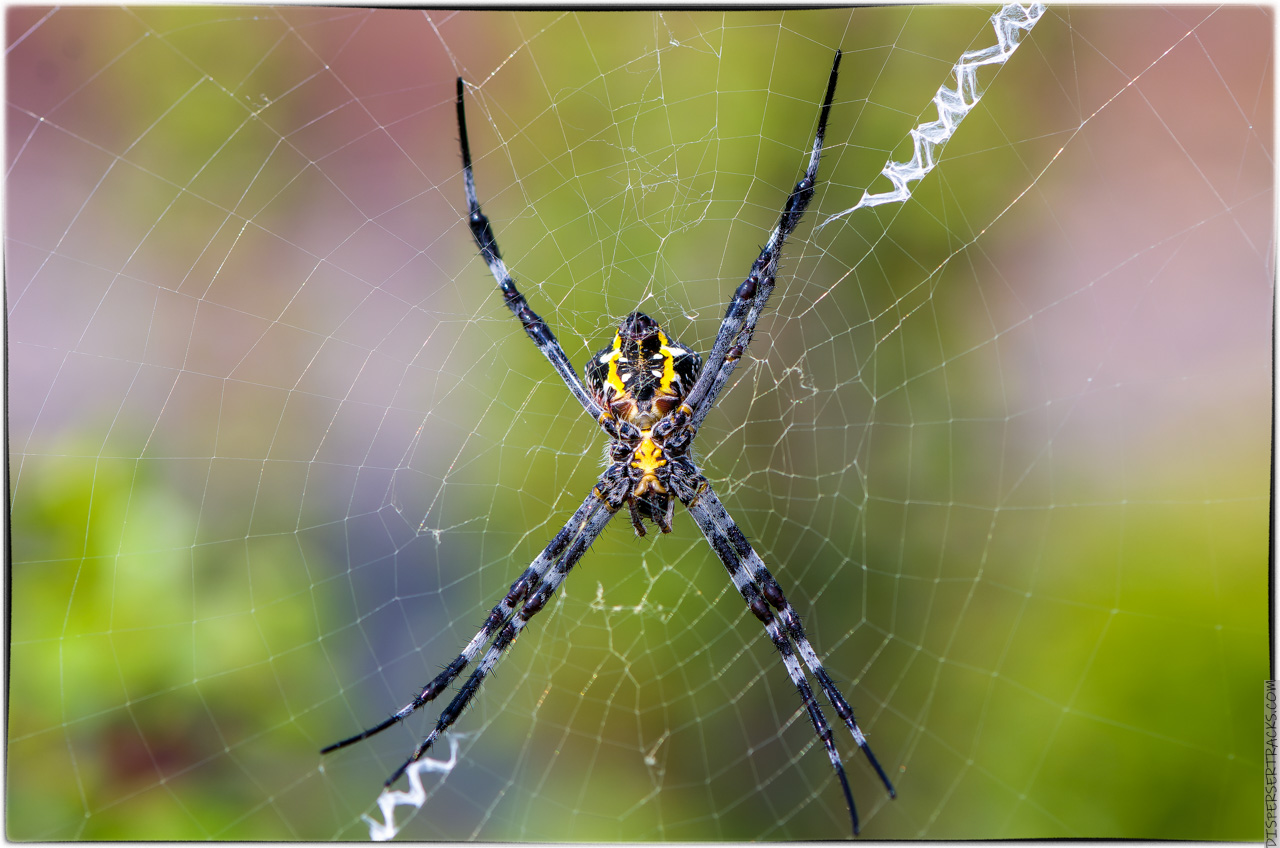 I’ve photographed these in Colorado many years ago, and now in Illinois. This past September, this White-lined Sphinx Moth visited our patio just before sunset one evening. Sometimes also referred to as the Hummingbird Moth, they’re supposed to be numerous, but this was the first specimen I’ve seen since we moved to Illinois nearly three years ago.

I snapped something like 60 or 70 photos but I won’t bore people with that many (but it was difficult paring down). Notice how, regardless of its position, it keeps its eyes on me … er … rather, my camera. 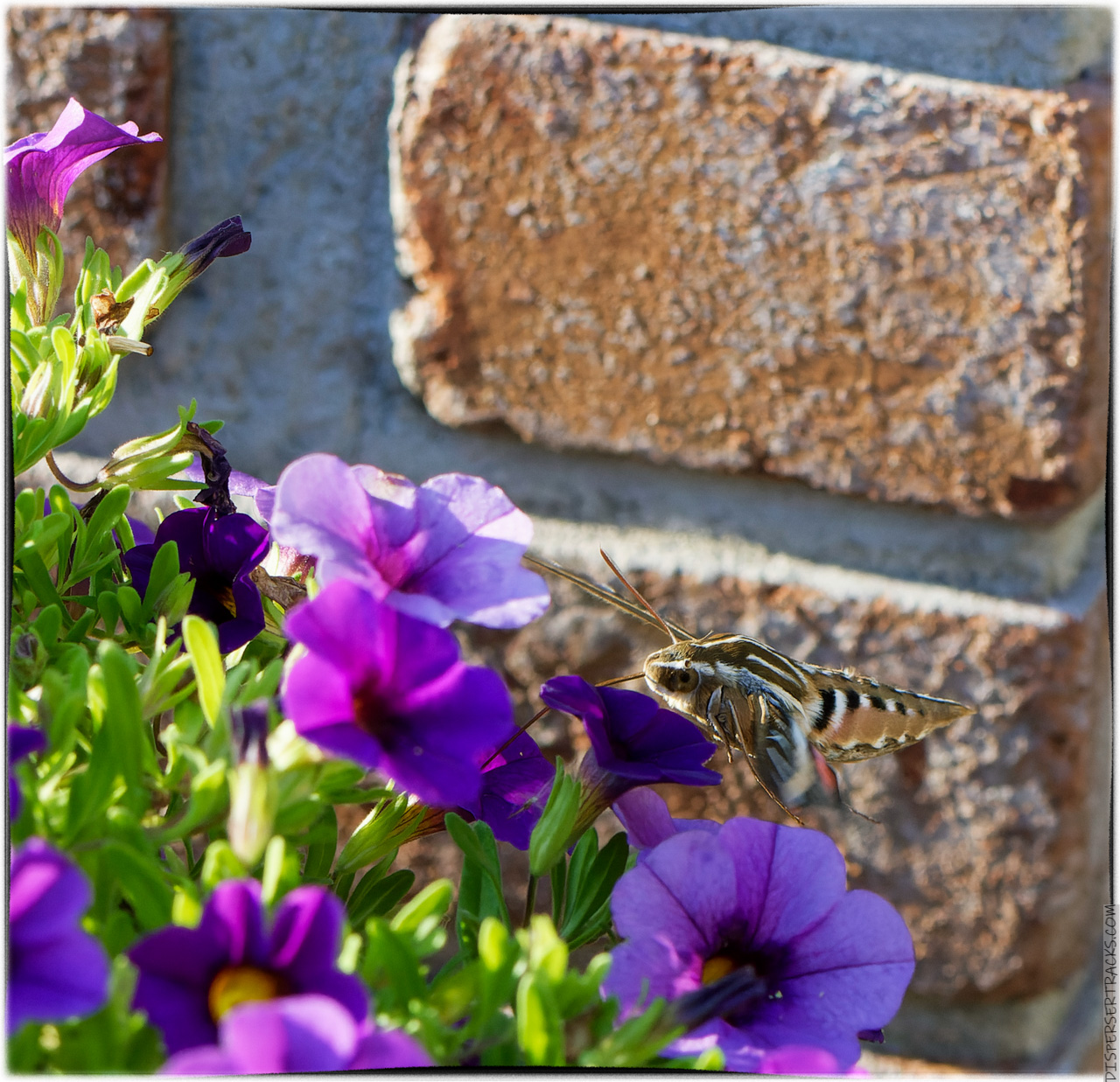 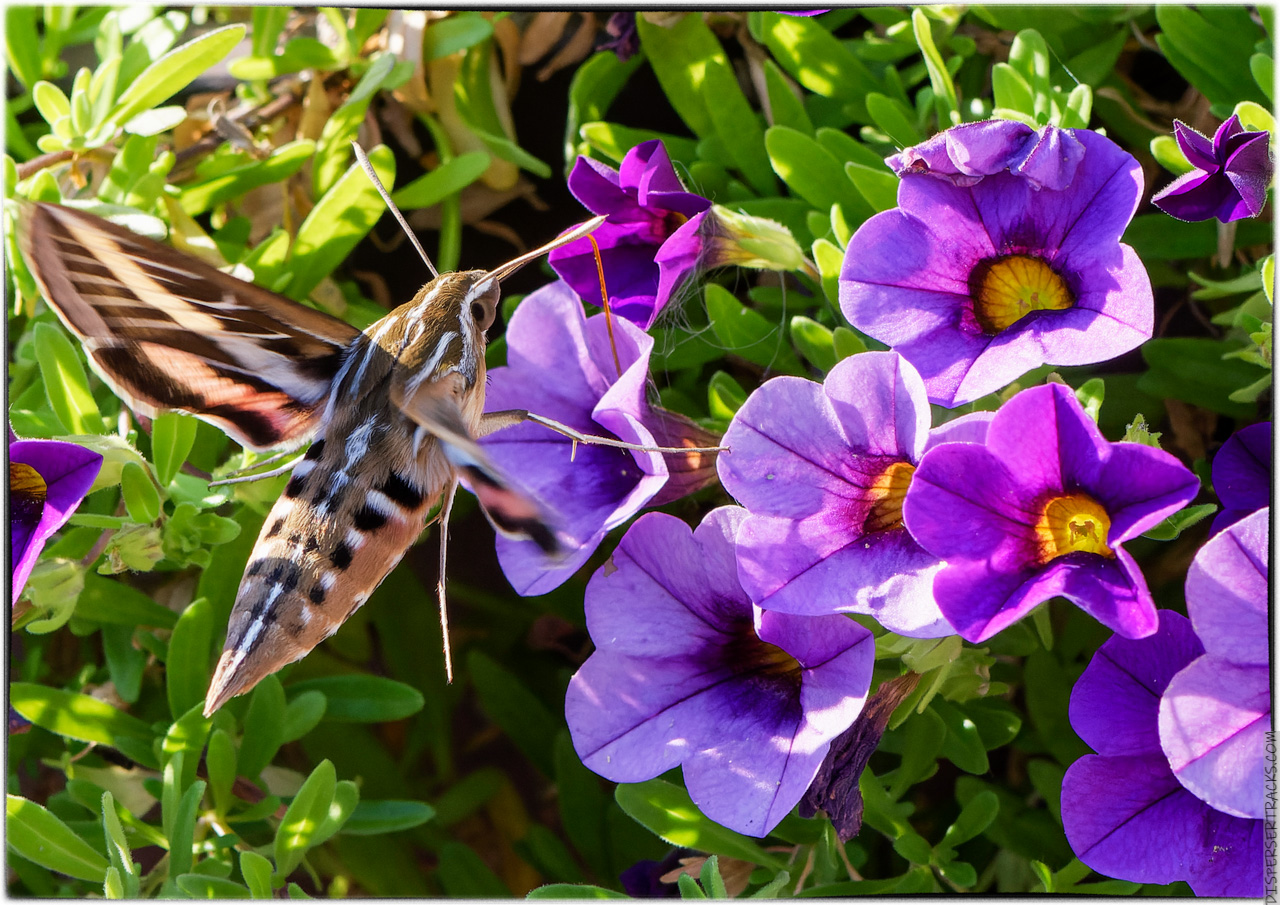 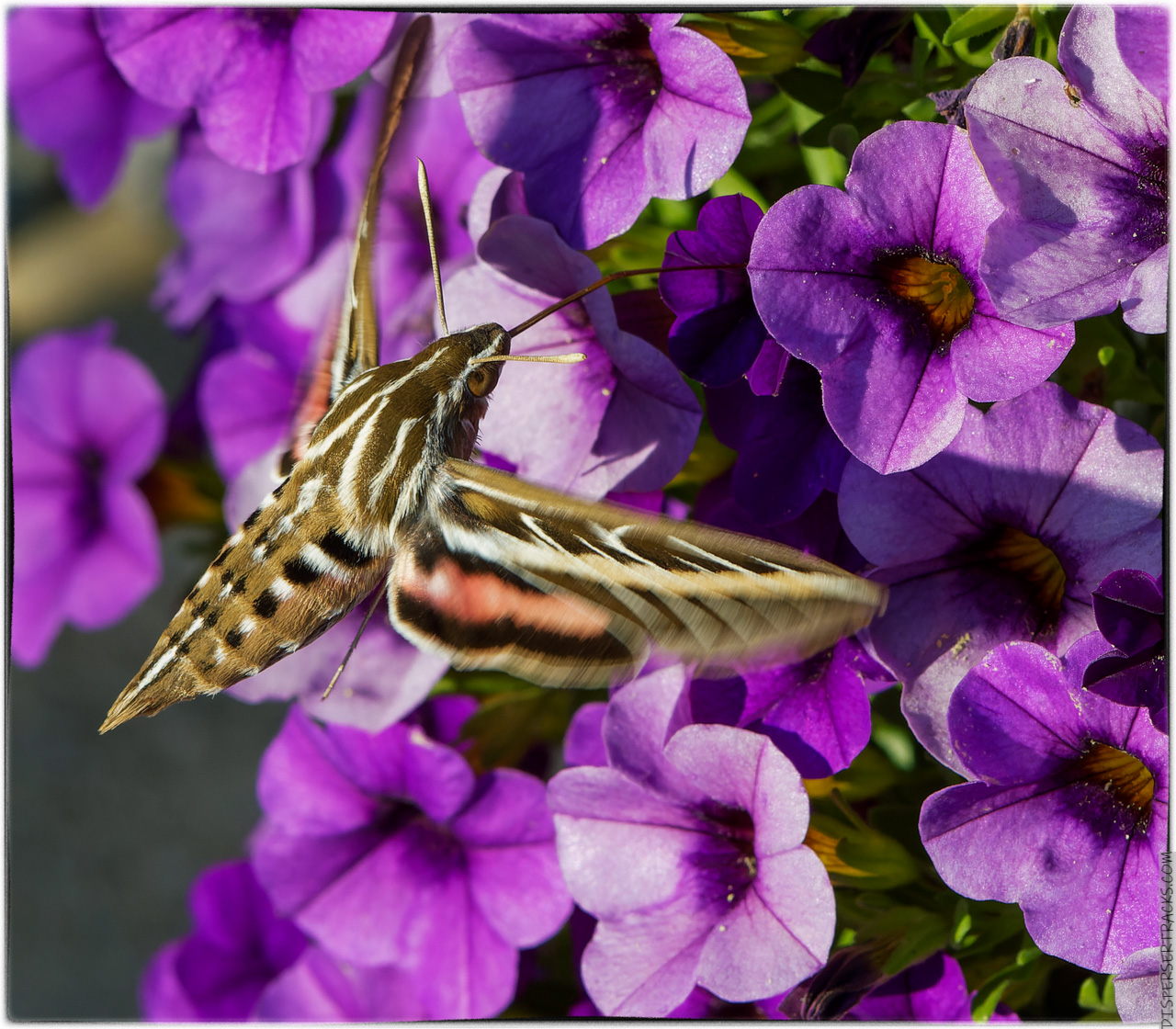 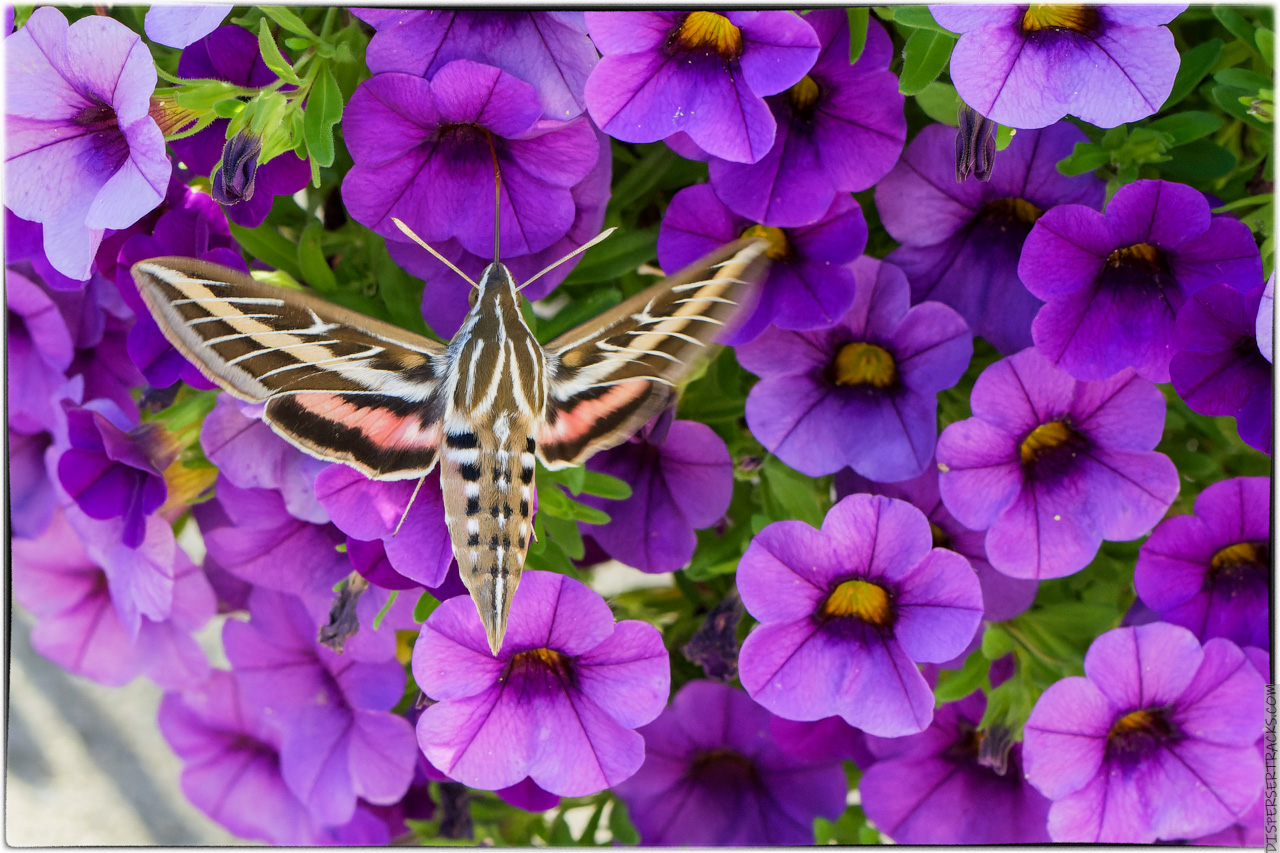 In early October, I was lucky enough to capture video of another WLS moth — or possibly the same one — feeding on the flowers on our front steps.

Here’s a video from Vimeo:

A Praying Mantis, or praying mantid, is the common name for an insect of the order Mantodea. These insects are notorious predators and their name is sometime mistakenly spelled ‘Preying Mantis’ which is incorrect. They are in fact named for the typical ‘prayer-like’ stance. There are approximately 2,000 mantid species worldwide. The majority are found in Asia. About 20 species are native to the USA.

These three specimen were photographed in Colorado, Hawaiʻi, and Illinois.

The first, from Colorado, was photographed at night and the photos were rotated 90° to facilitate viewing. 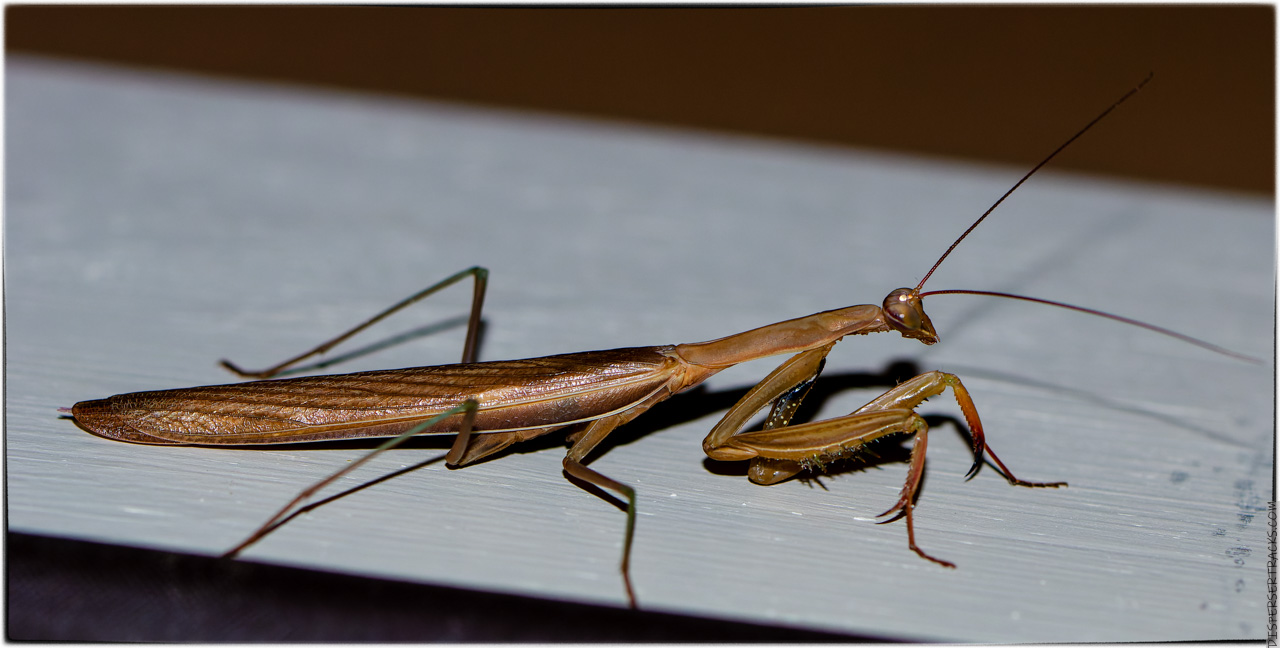 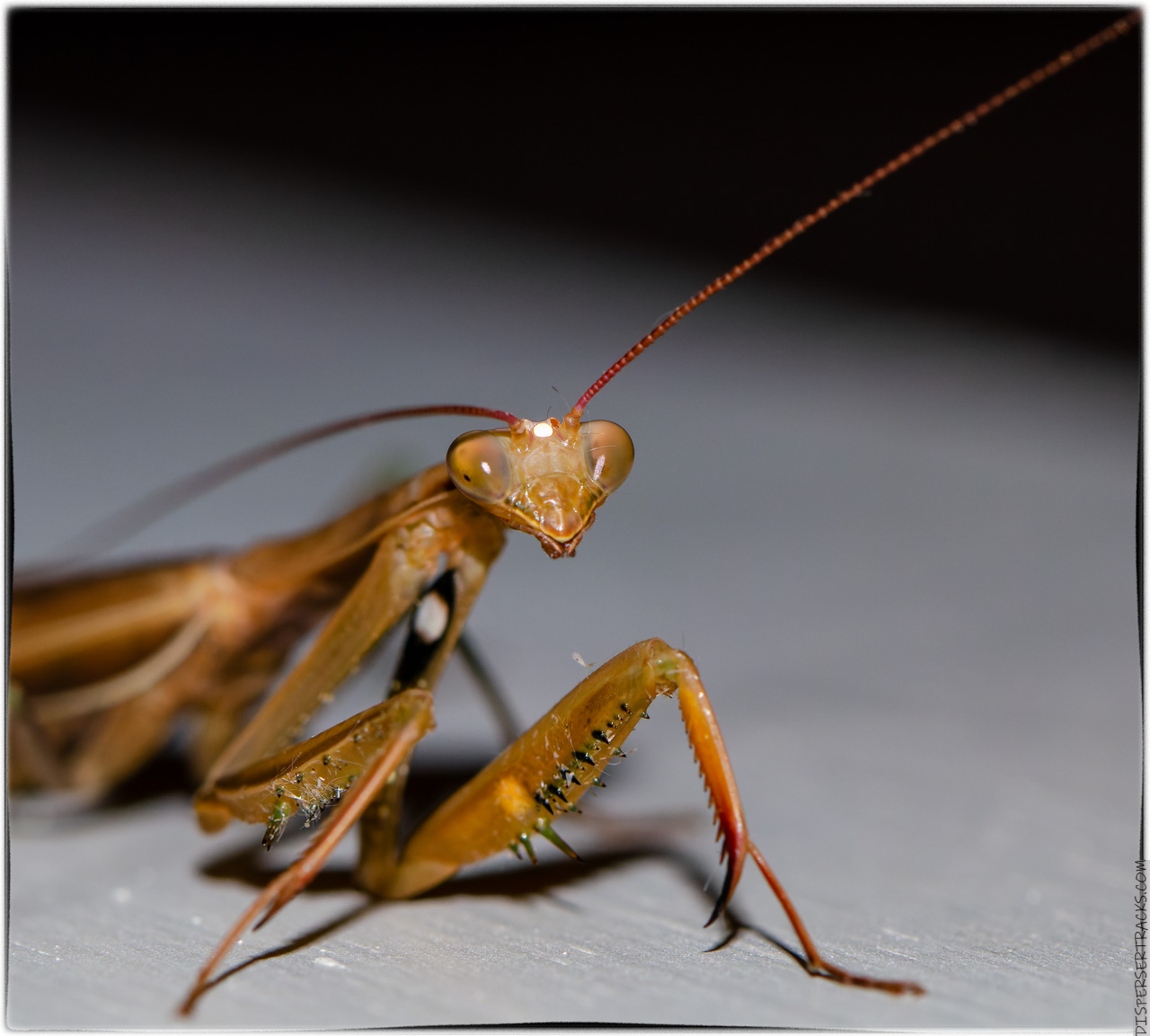 The second was photographed in Hawaiʻi and looks to be a juvenile. Hawaiʻi should be a paradise for these predators because everywhere you look, you see bugs. 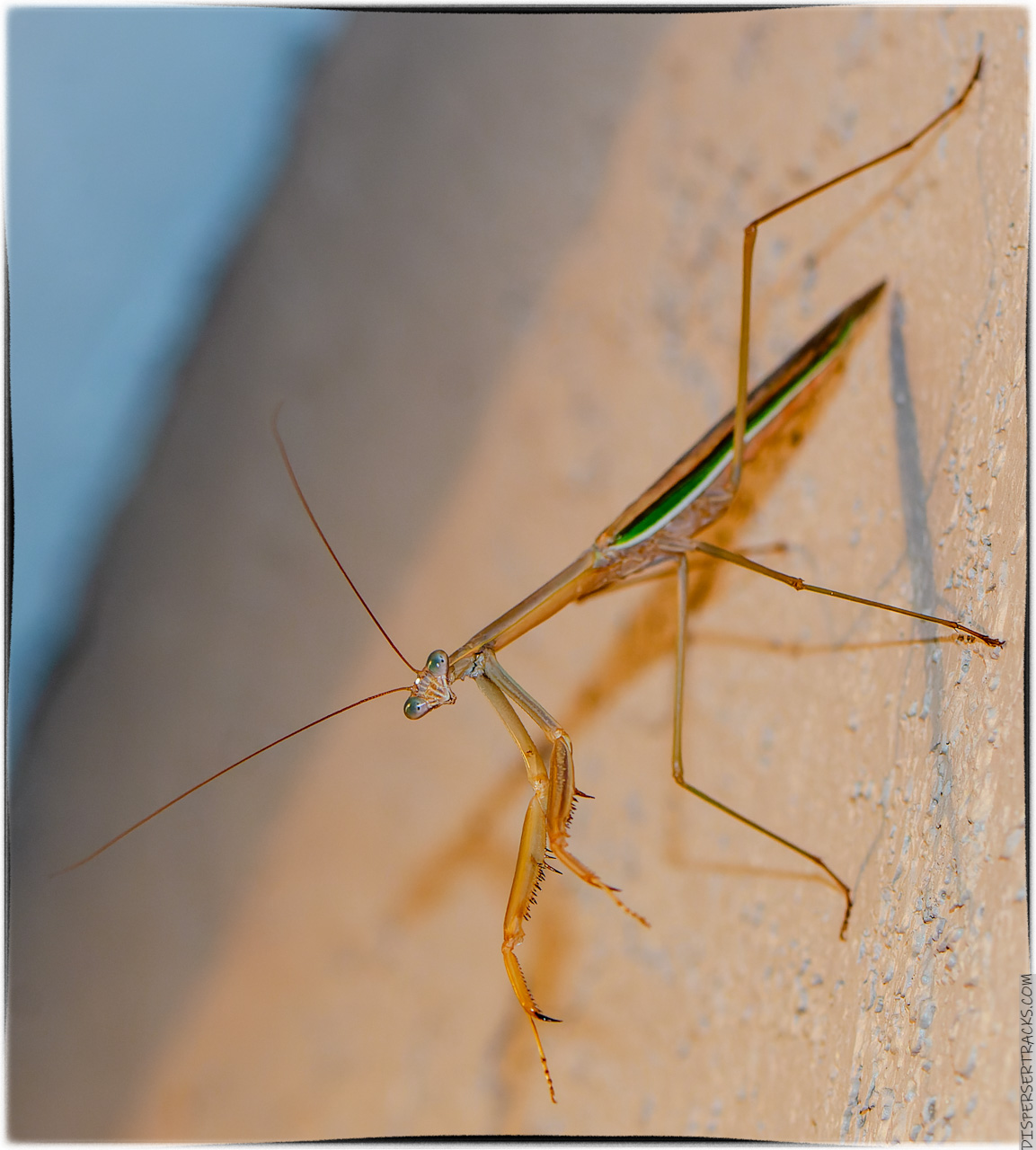 The last one is from my yard and it hung around there for a few weeks. See if you can spot it . . . 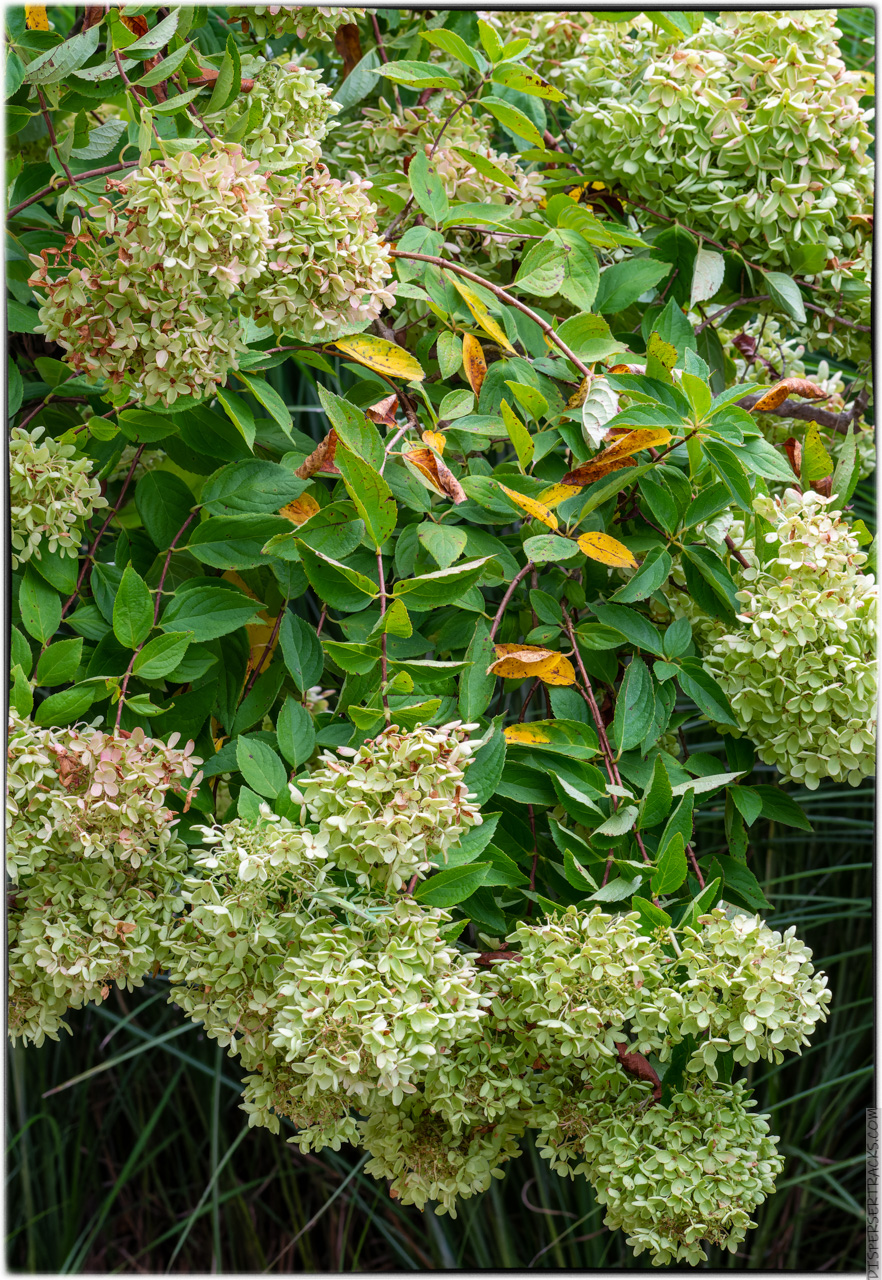 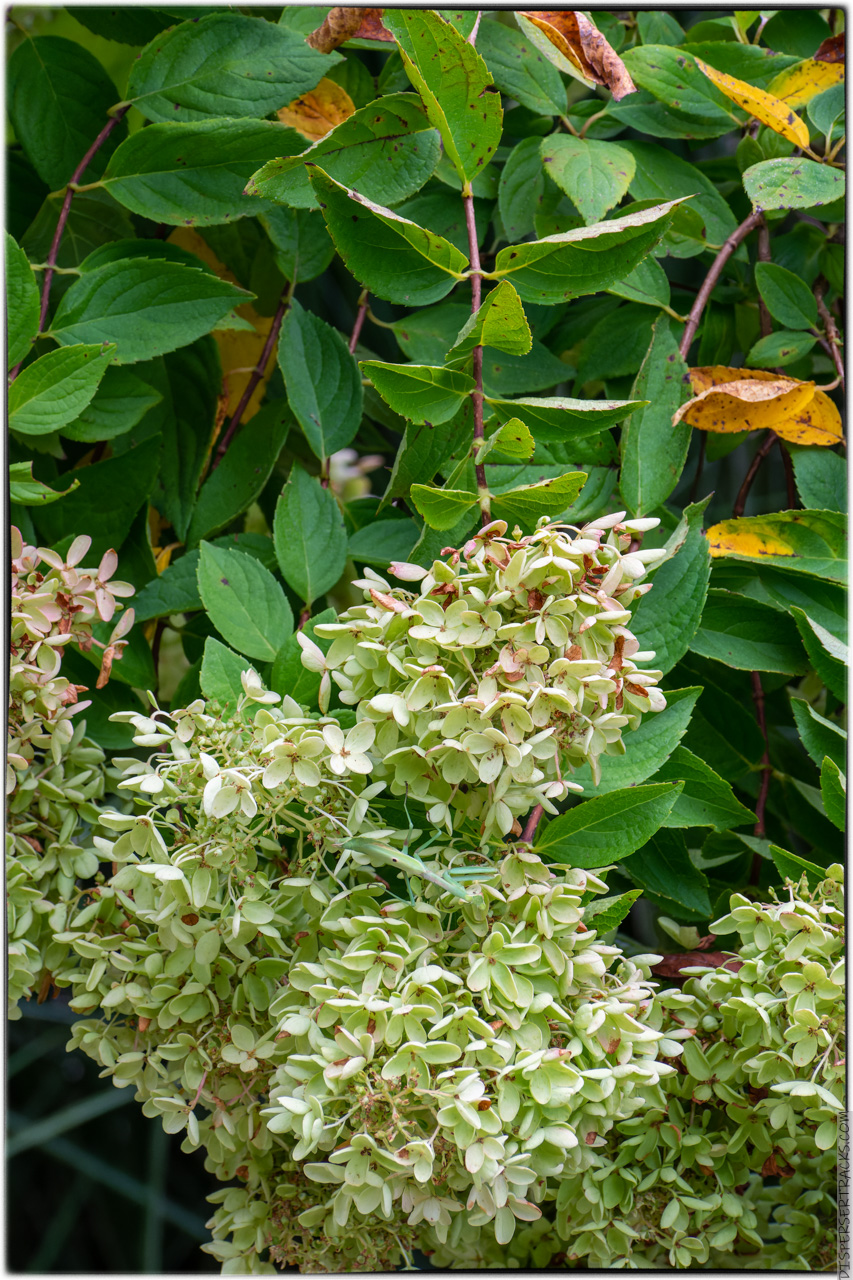 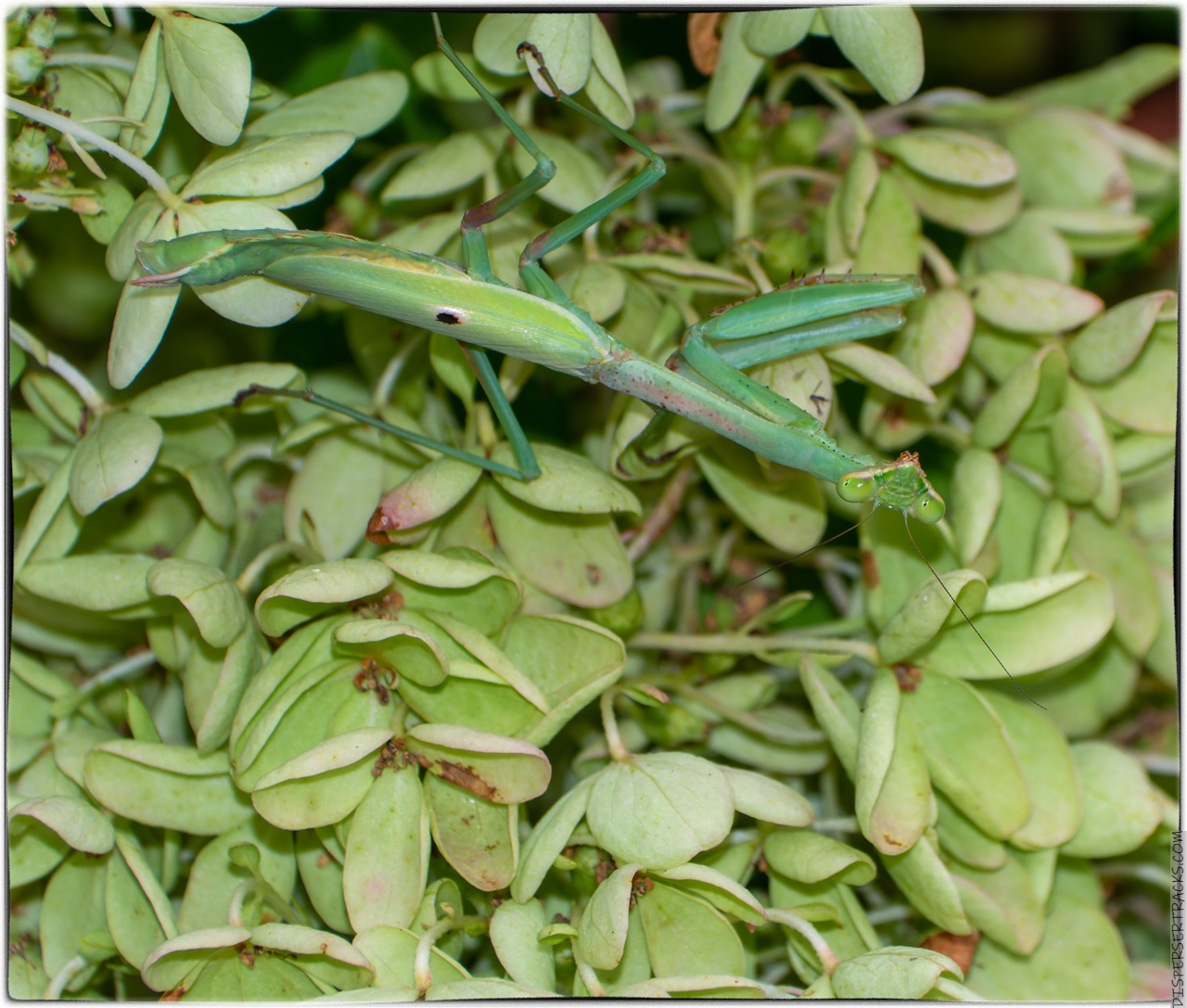 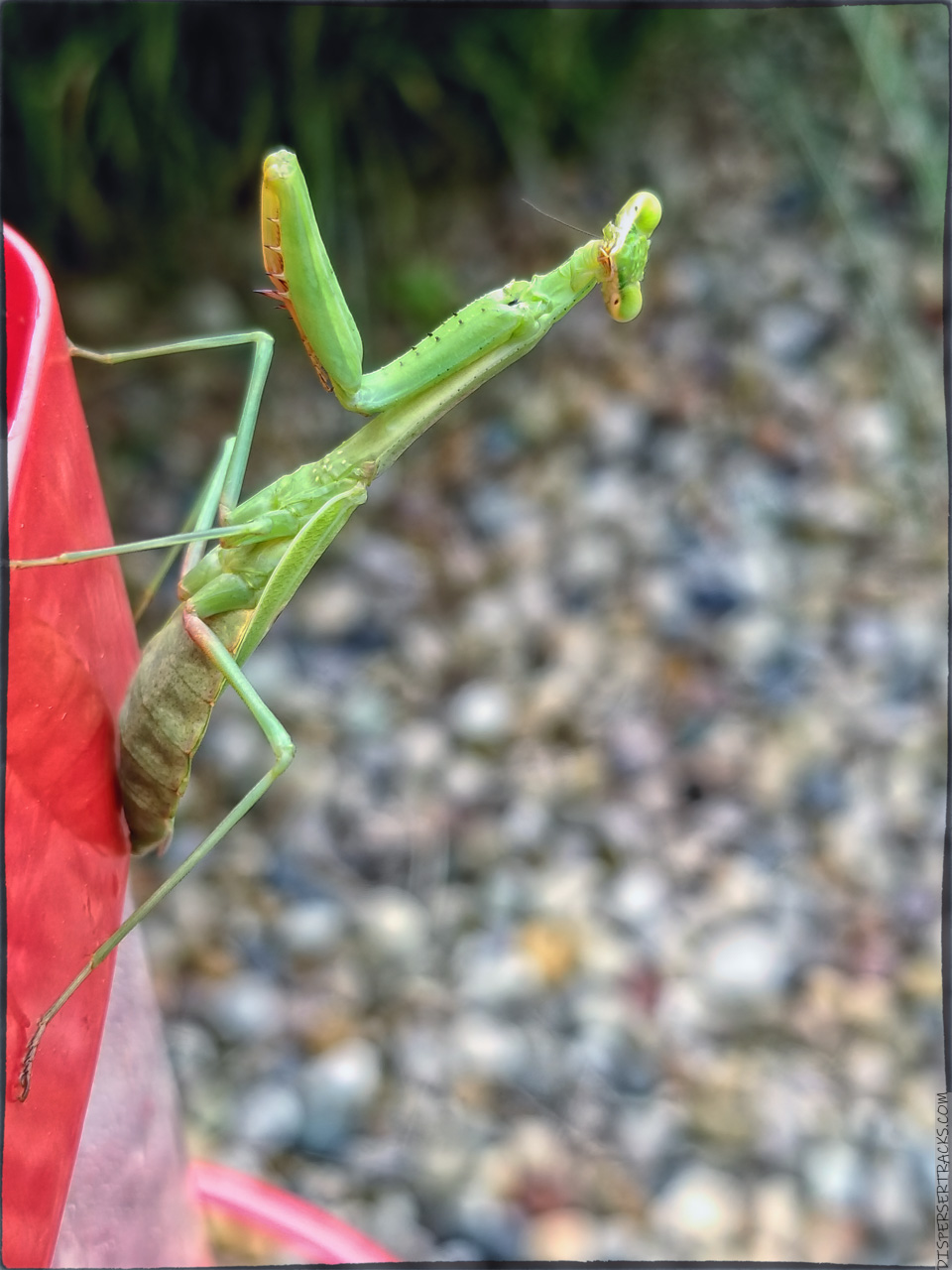 Yup, that’s a green mantis on one of my hummingbird feeders, hiding in plain sight. I would move it whenever I needed to change the sugar water and clean the feeder. It seems to me it would have been more successful hunting on the tree where I put it, but I’ll defer to its hunting expertise.