Today we have a combination science-and-photo post from Bruce Lyon, an ecologist, ornithologist, and evolutionary biologist at the University of California at Santa Cruz (unless you’re new, you’ll have seen his posts before). Today is WEASEL DAY!

I have some long-tailed weasel (Neogale frenata) photos to share—mostly just photos but I will bring in a bit of science. This species is related to the stoat (Mustela erminea), also known as ermine or, in North America, as the short-tailed weasel. I mention this because a few weeks ago Jerry mentioned that he is very fond of stoats. However, when I Googled to search for stout, the top links were all to the famous dark strong beer so maybe that was what our host was about! [JAC: Bruce misspelled “stoat” as “stout”; I’ve corrected all but one usage,.]

Today the focus is on the mammal, not the malted beverage.

I regularly encounter weasels while watching birds on the coast between Santa Cruz and San Francisco in Central California. They are common on the coastal bluffs and seem to use the same dirt tracks that I hike on so I see them fairly often. They are typically shy and give only fleeting views before darting into the vegetation once spotted, but occasionally they do stay in view long enough to pose for a few photographs.

Below: A typical fleeting view, in this case the north end view of a southbound weasel. Zooming in on the photo shows that this animal has a big package below his tail—testicles—so it was a male. 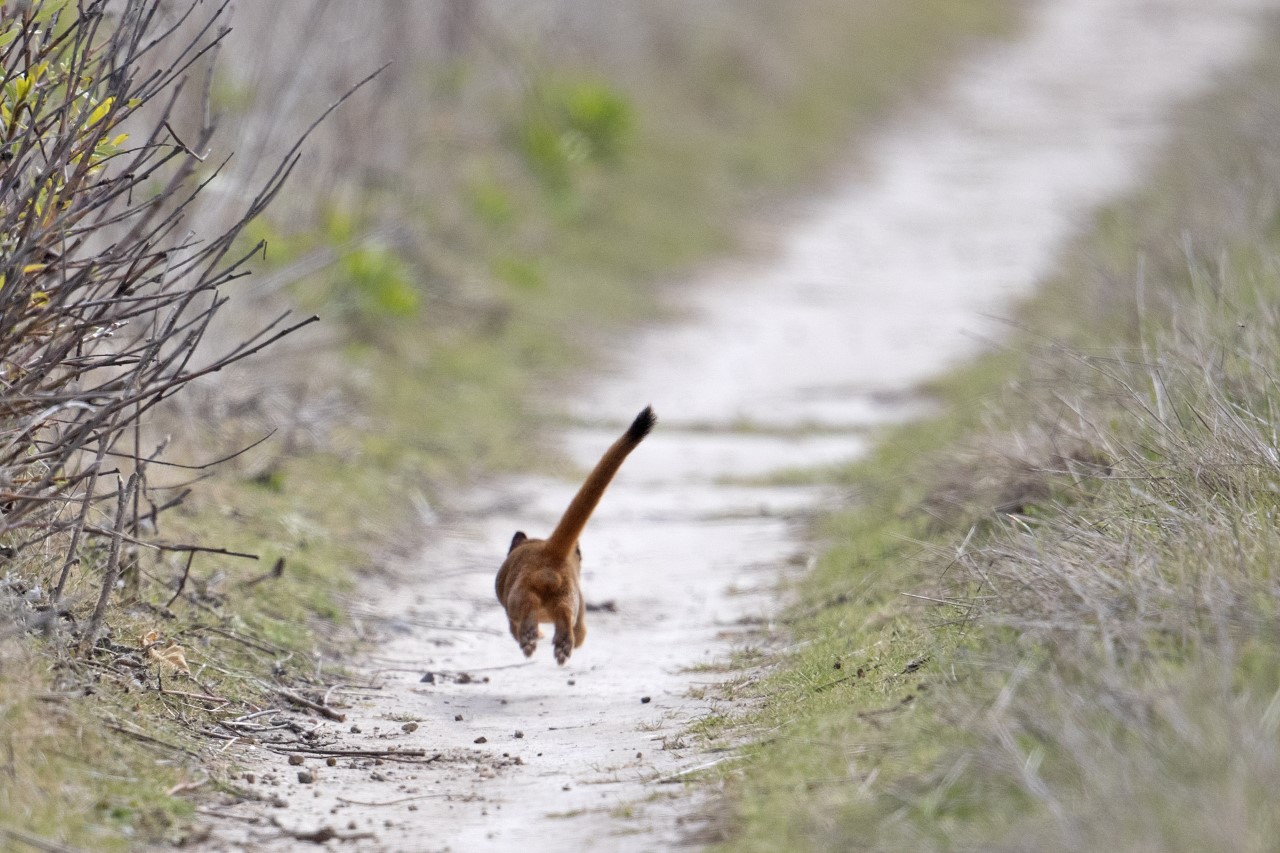 Many of the readers are likely familiar with the phrase “pop goes the weasel“, which originated in England in the 1800’s as a song and then a dance. The specific meaning of the phrase ‘pop goes the weasel’ is not clear. I recently had a couple of encounters with a variant of the phrase— ‘drop goes the weasel’. Last spring while birding the coastal bluffs a weasel came bounding towards me along the dirt track we were sharing, and it had prey in its mouth. I expected the prey to be a rodent. When the weasel saw me it dropped the prey item on the track and darted into the bushes. After a minute it came back and grabbed the prey item and my photos showed it to be a rubber boa (Charina bottae), the first time I have ever seen this interesting snake. 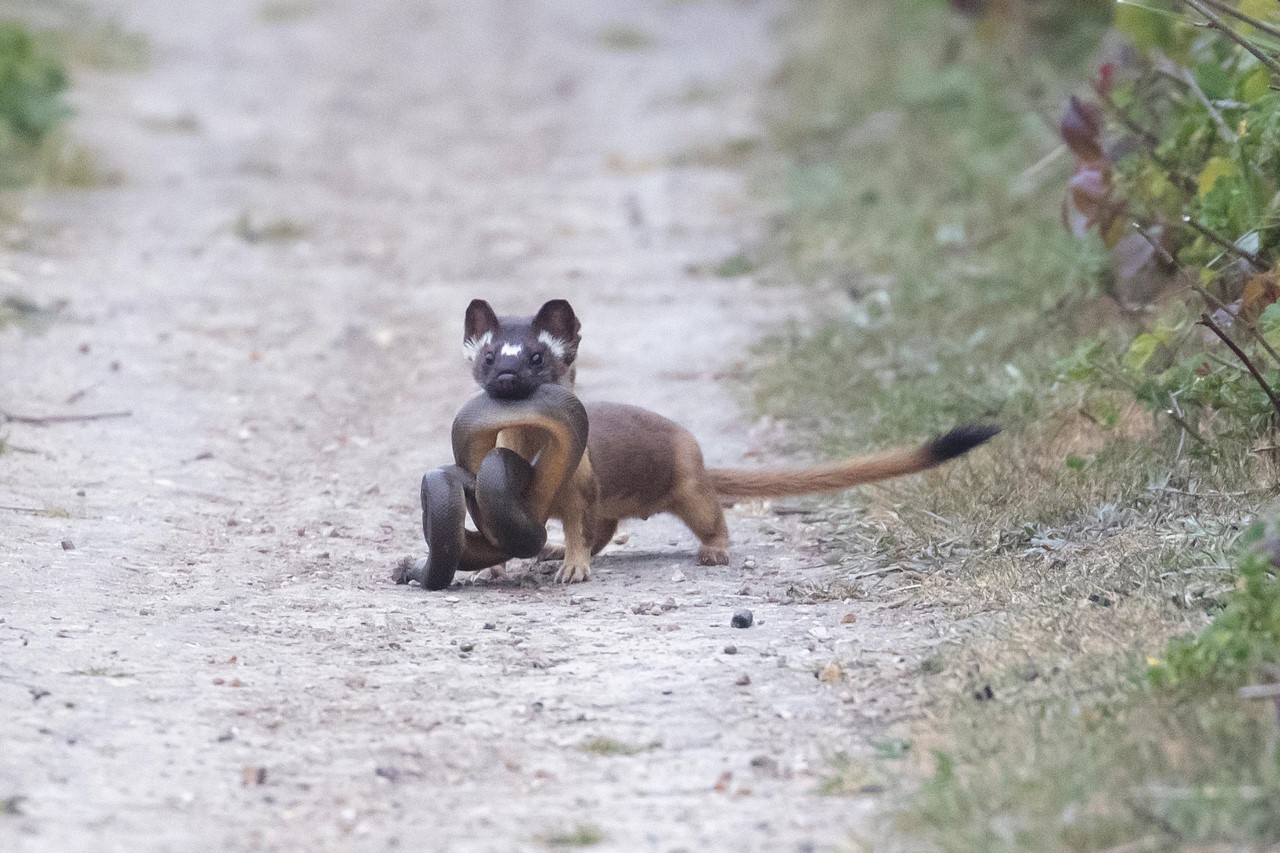 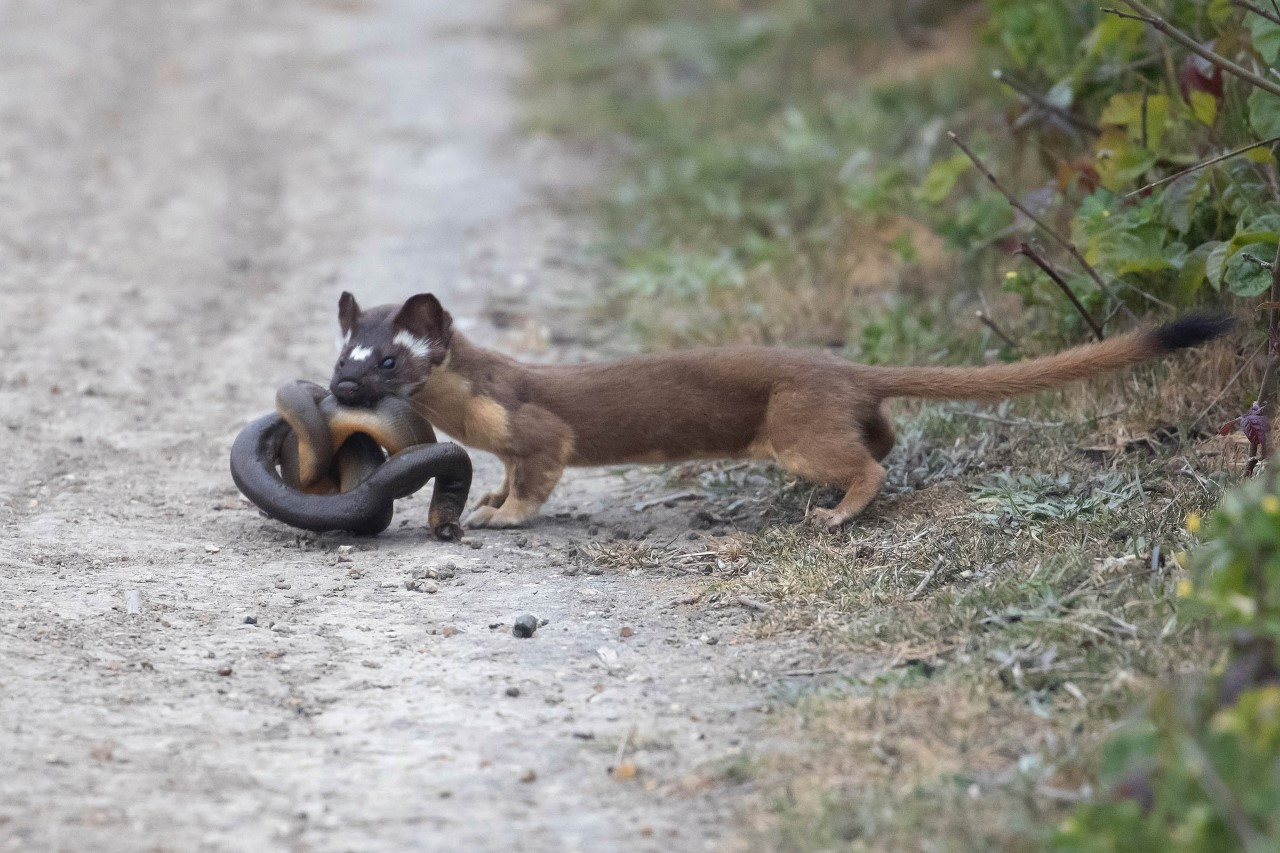 A few weeks later something similar happened at the same spot. I had been watching birds and not paying attention to the track (or looking for weasels) but at one point I looked down and saw a fresh-looking dead rodent on the track (which I suspect was a vole). When I checked the vole it was warm and very fresh (not in rigor mortis). Figuring it might be another case of drop goes the weasel, I moved back and barely had time to focus my camera before the weasel popped out of the bushes, grabbed the rodent and darted back into cover. 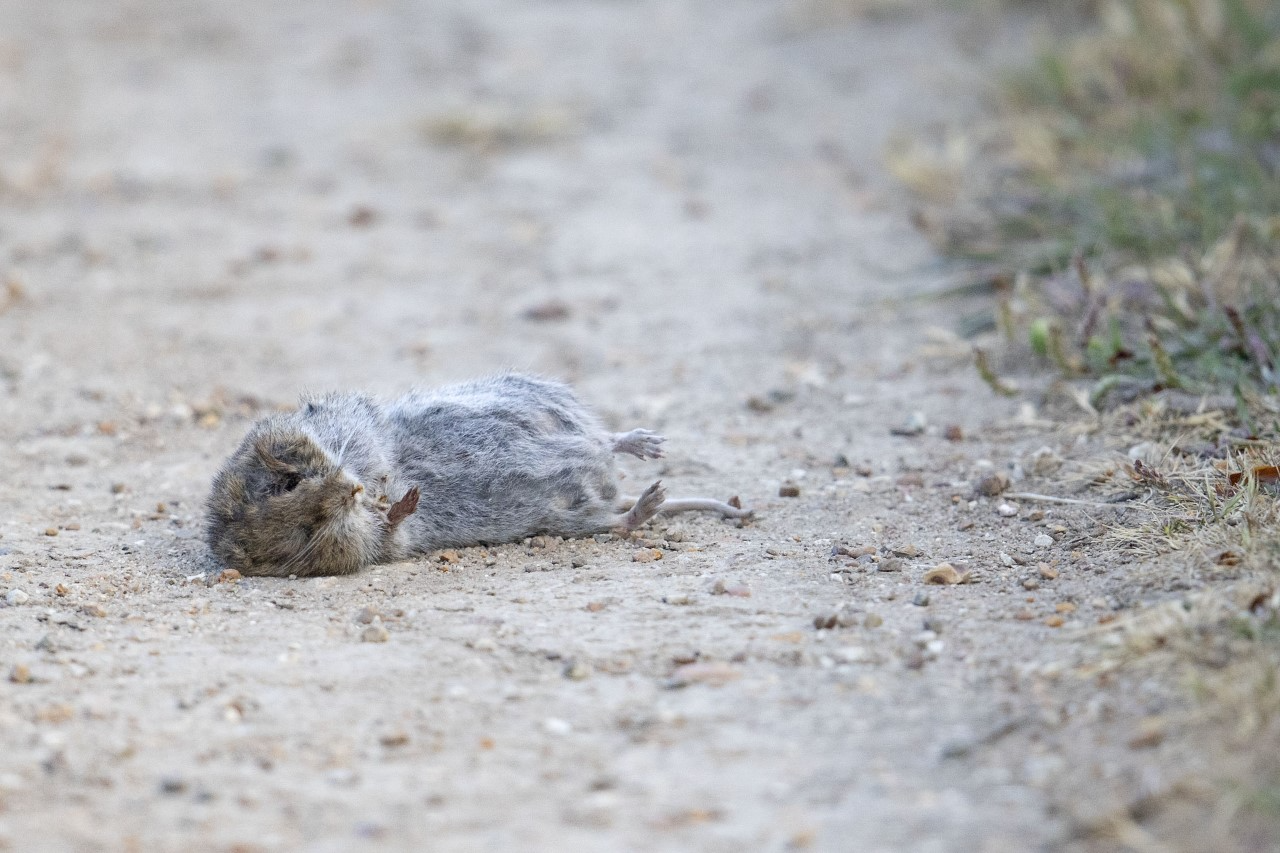 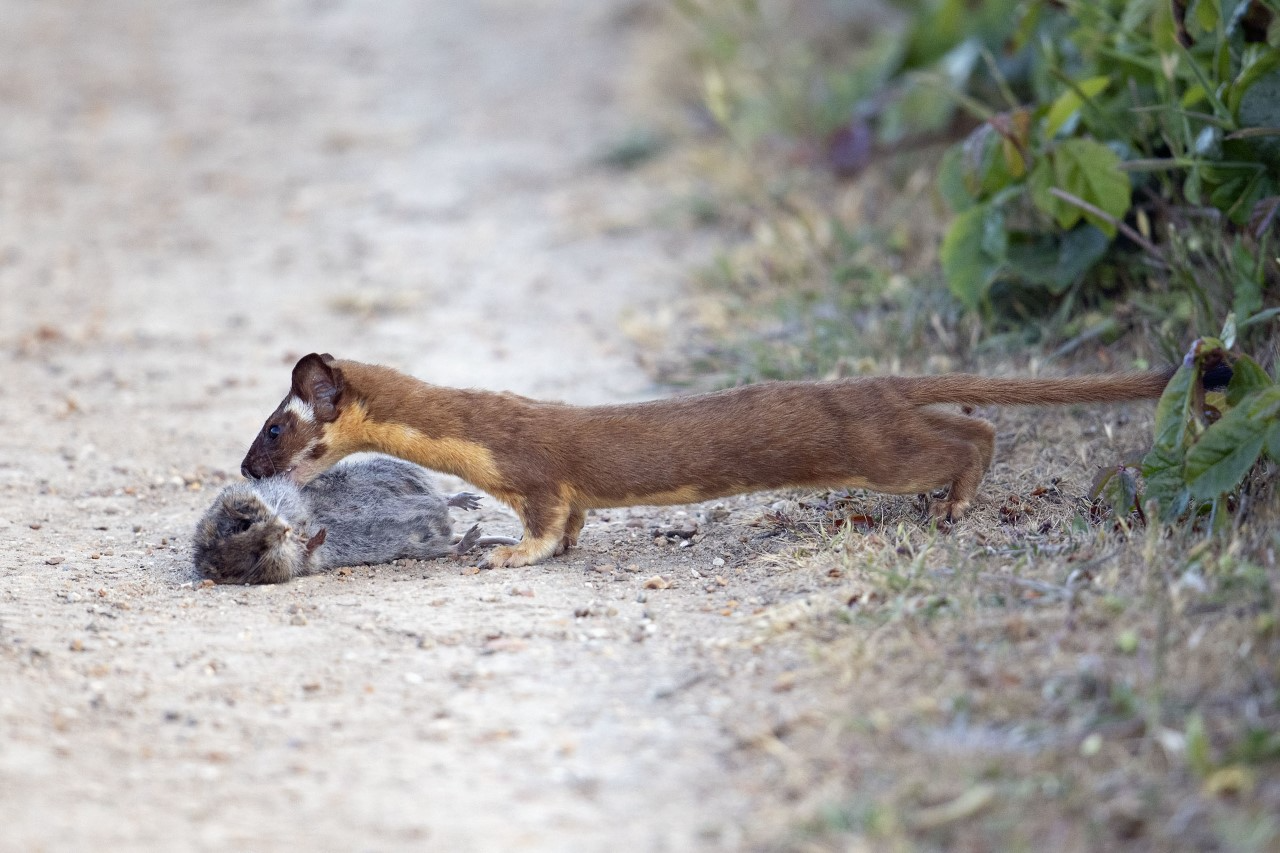 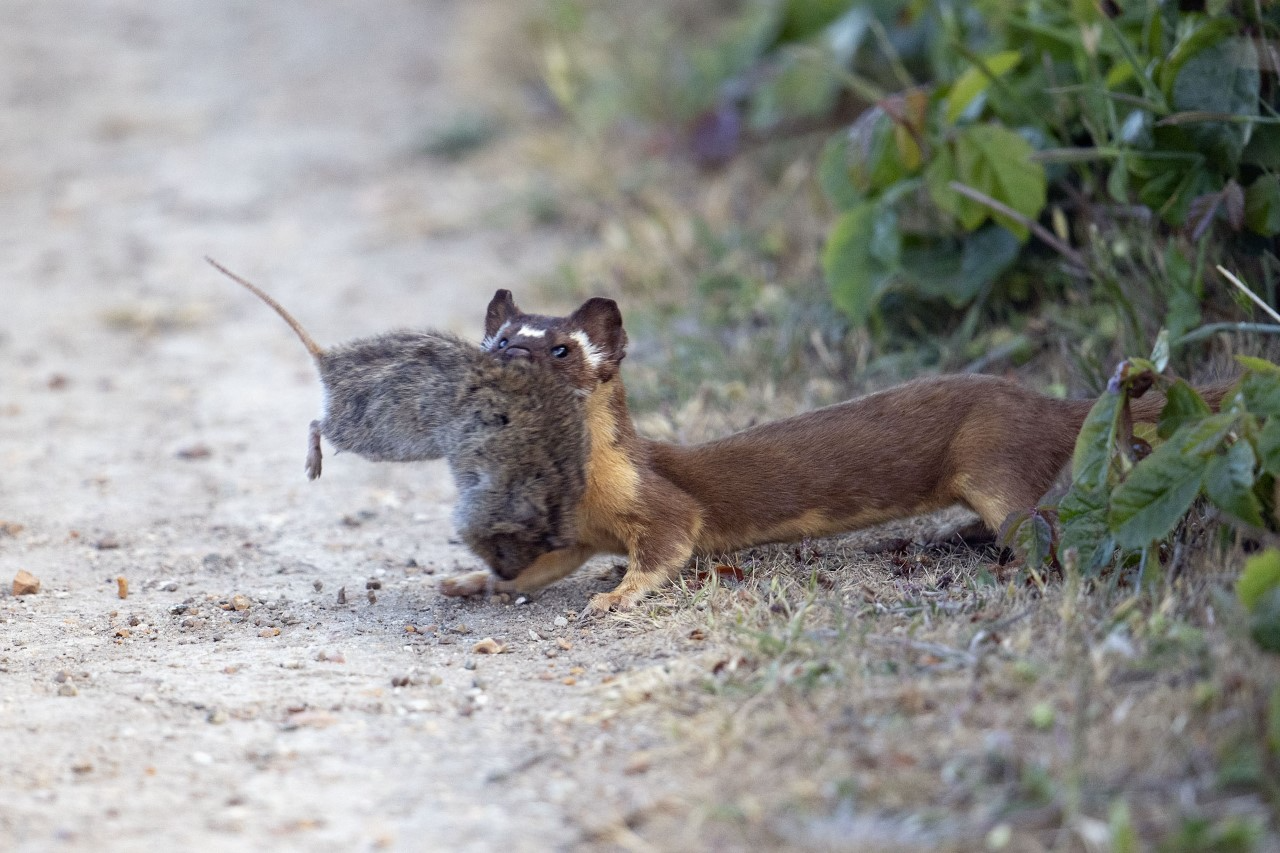 Below. Weasels are ferocious and can take prey much larger than themselves. Here is video, from the Attenborough series Life, of a stoat chasing and eventually killing a rabbit many times its size.

Below: Weasels are very long and skinny which allows them to explore narrow underground burrows for prey like rodents. Here a weasel surveys its surroundings, looking like a periscope. 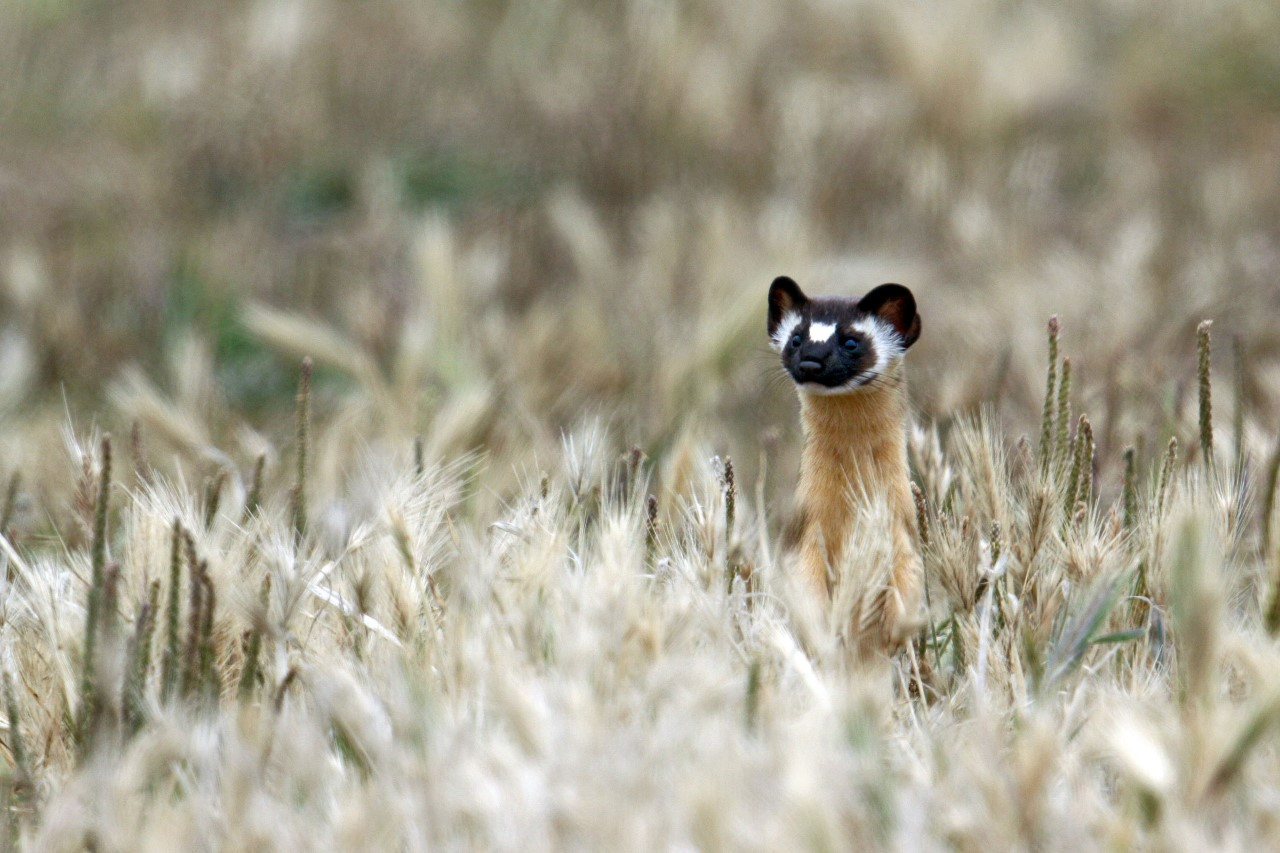 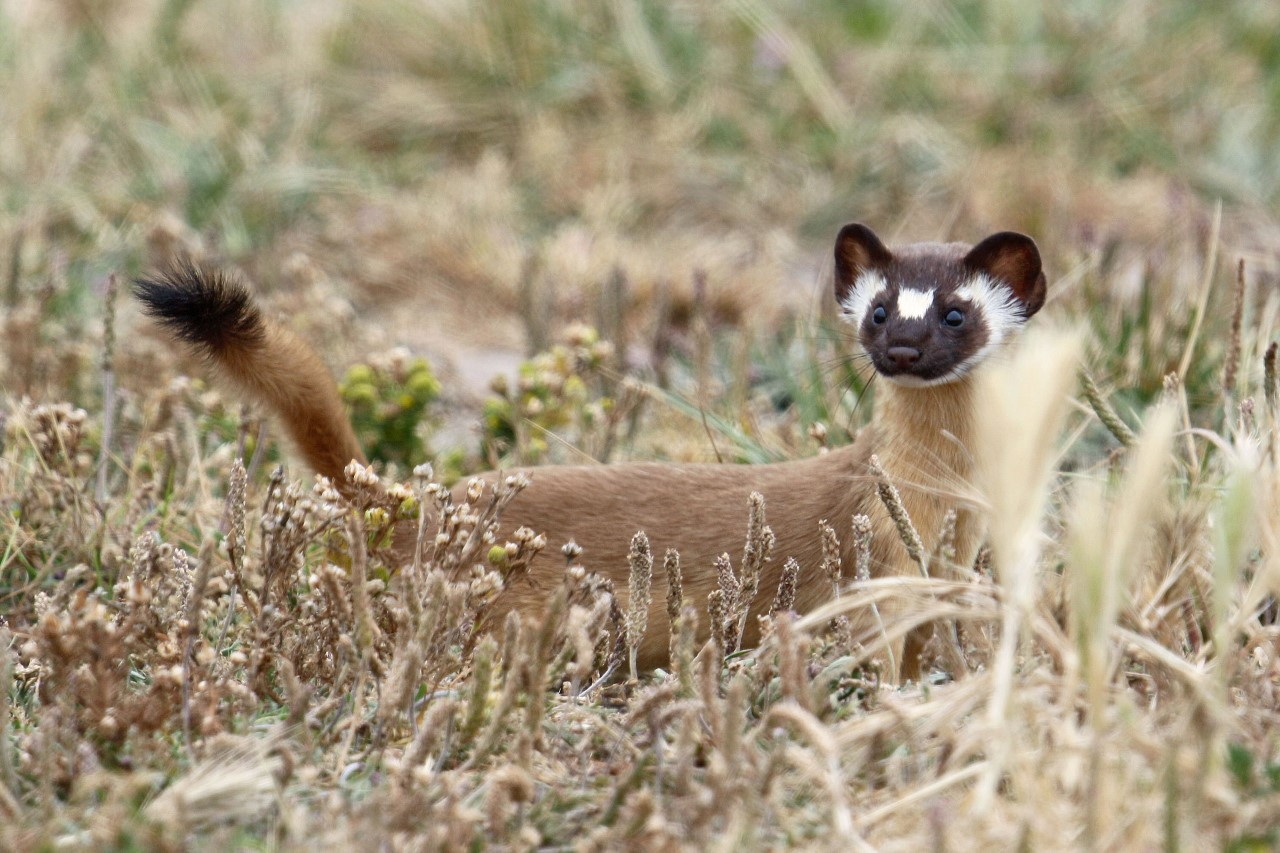 Below: a very colorful individual. Note the orange chest and belly and the conspicuous face markings. What a gorgeous mammal! 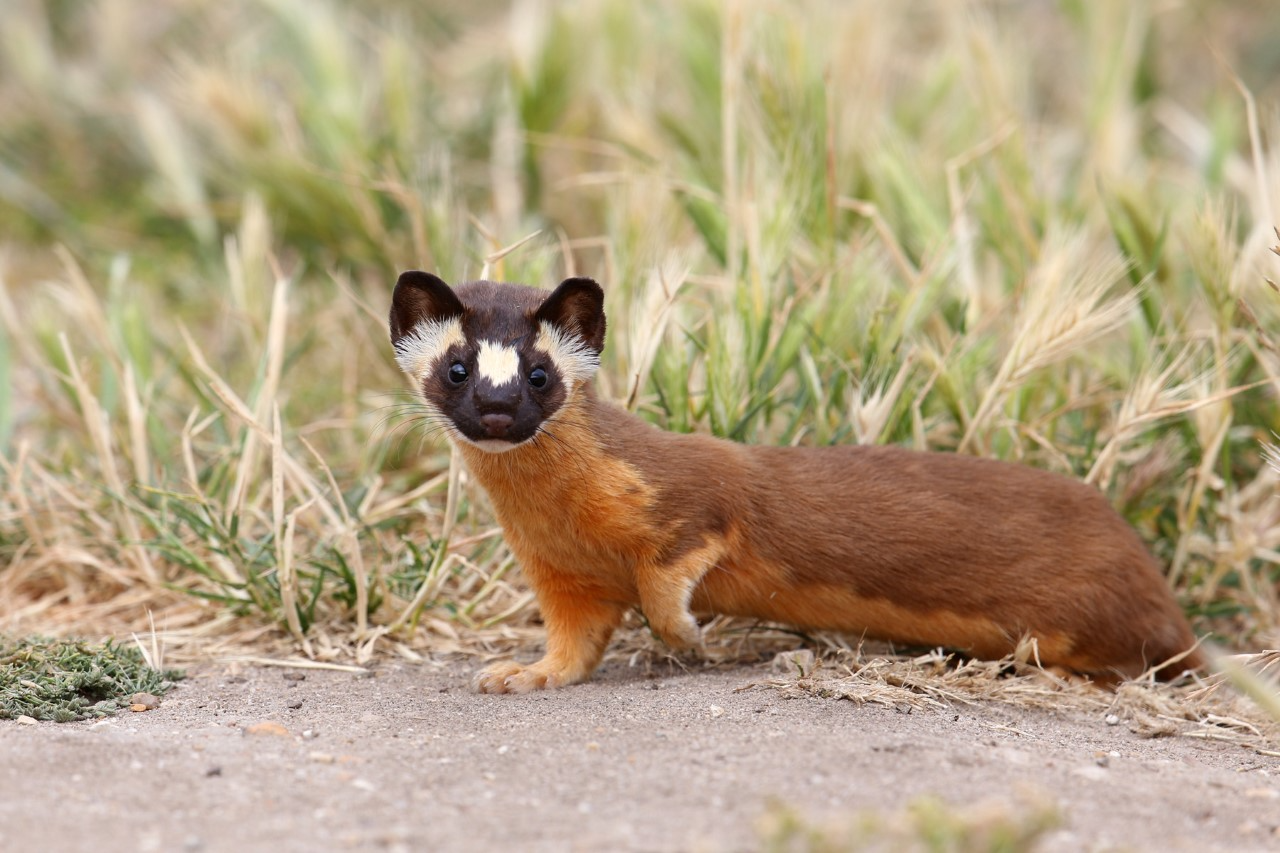 Below: a closeup of the same animal showing the conspicuous face markings. 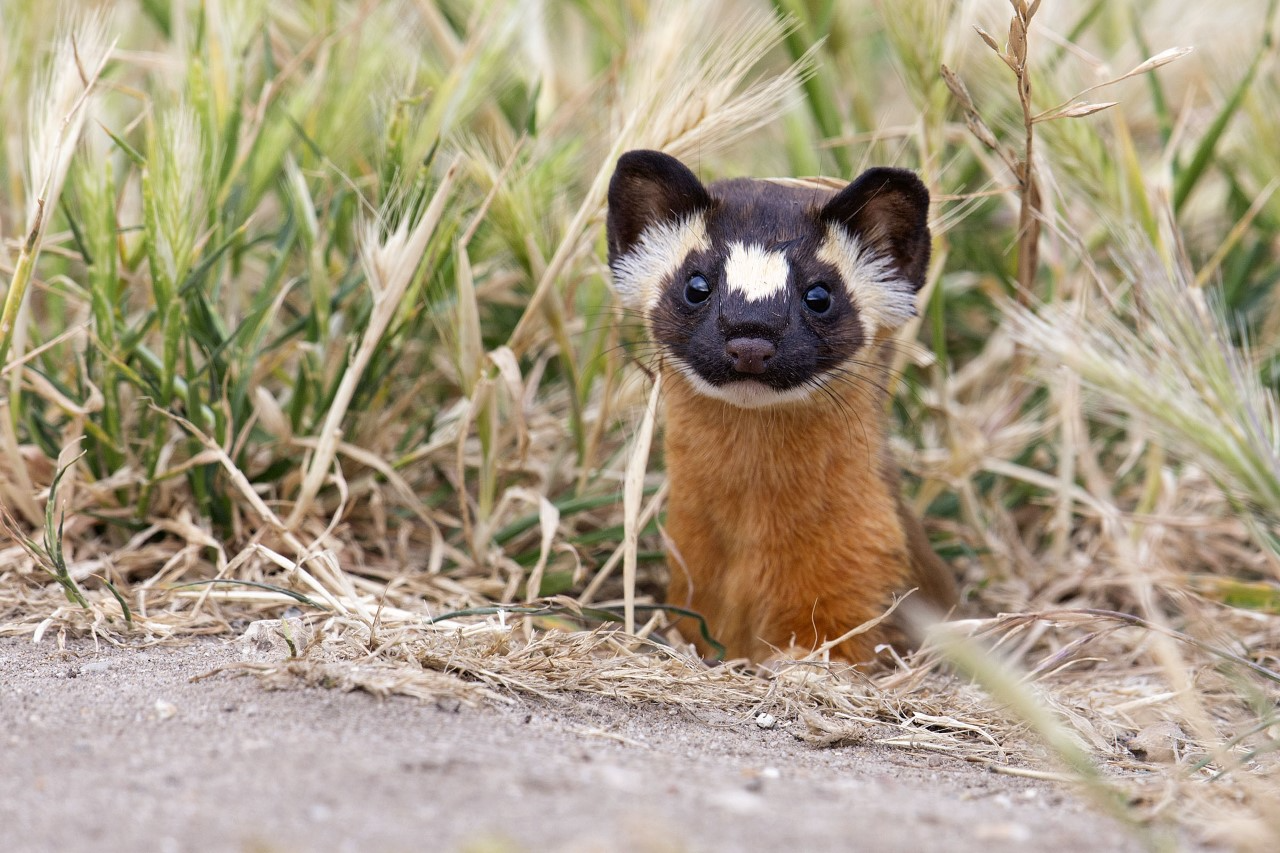 When I see such colorful striking markings in birds, I wonder if there might be a signaling aspect and I wondered if this color might be a signal in the weasels. Weasels are such fierce bad-asses for their size that I wondered if these markings might be a form of aposomatic coloration— coloration that warns predators not to mess with the animal. Aposomatic coloration is common in nature: familiar examples include bees, monarch butterflies and coral snakes.

I found a study that proposed this same idea—that the conspicuous facial patterns in mid-sized mustelids may be a warning signal to would be predators to steer clear of these ferocious animals (Mustelidea is the taxonomic family that includes weasels ): Newman, C., C. D. Buesching, and J. O. Wolff. “The function of facial masks in “midguild” carnivores.” Oikos 108.3 (2005): 623-633. From the paper’s summary the authors state “A group of medium sized carnivores possesses conspicuously colored facial markings or masks. This facial coloration is most compatible with the aposematic warning hypothesis and functions to deter predation by larger carnivores.

Below: a figure 1 from their paper showing some examples of species with conspicuous facial masks. 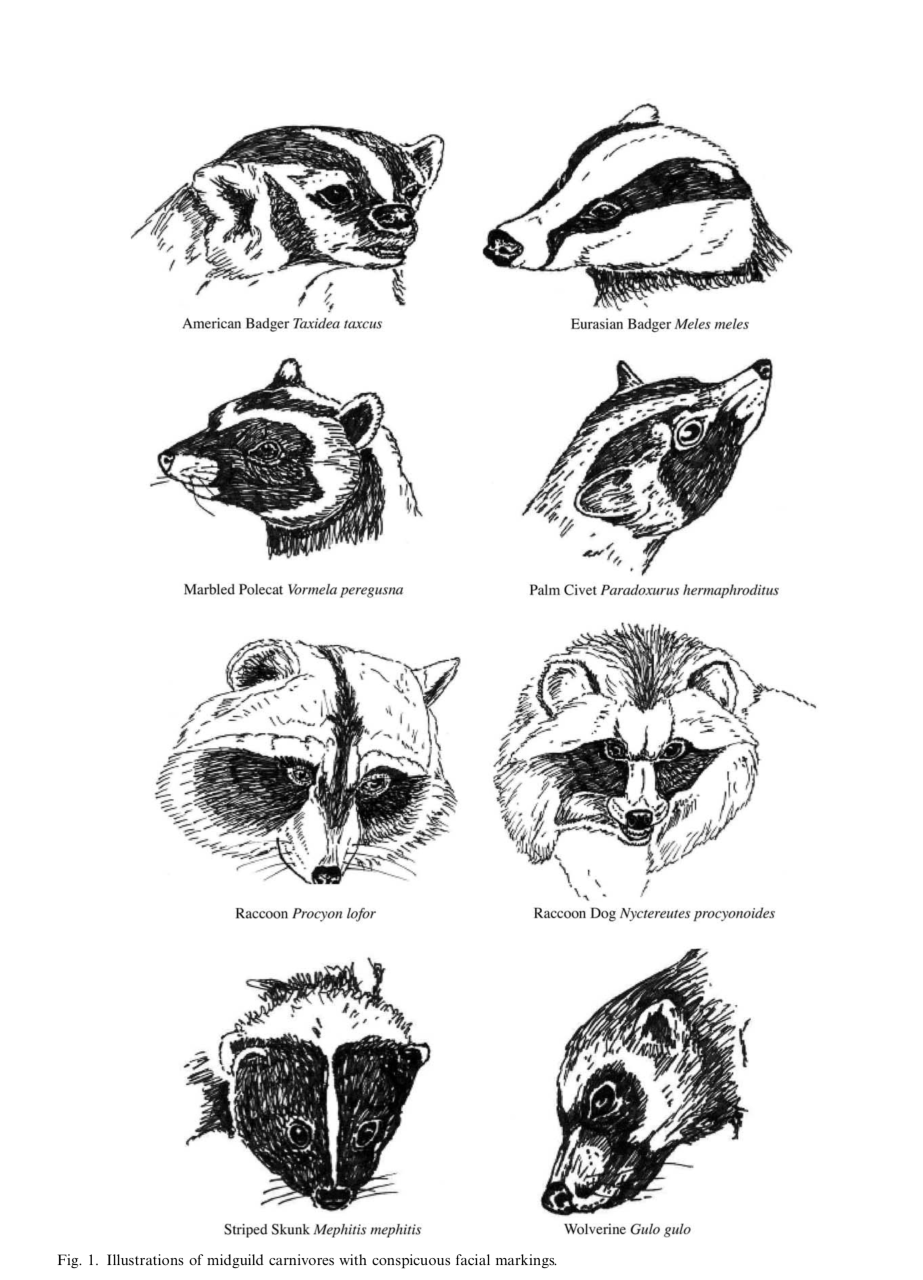 The paper suggests that mid-sized mustelids (rather than small or large) may be the most likely to benefit from an aposomatic face pattern because animals in this size range are both vulnerable to larger predators but big enough to put up a good fight. Weasels are smaller than the size where most species have conspicuous facial masks but they apparently have bigger anal scent glands that can produce a noxious odor. So perhaps they are like mini skunks and the conspicuous coloration warns of their stinky musk. Or, possibly, the face is a signal to other weasels to avoid two weasels mistakenly attacking each other if they happen to bump into each other while hunting. I could imagine mistakes could happen if weasels were to be similar in color to their prey—say a vole. Weasels are frenetic and therefore  likely to pounce quickly on suspected prey (a case of ‘shoot first and ask questions later’). This could be disastrous in a  weasel versus weasel encounter. Interestingly jumping spiders—also known for their fast pounce hunting style—seem to have such an intraspecific signaling system like this that reduces the risk of spider on spider predation. 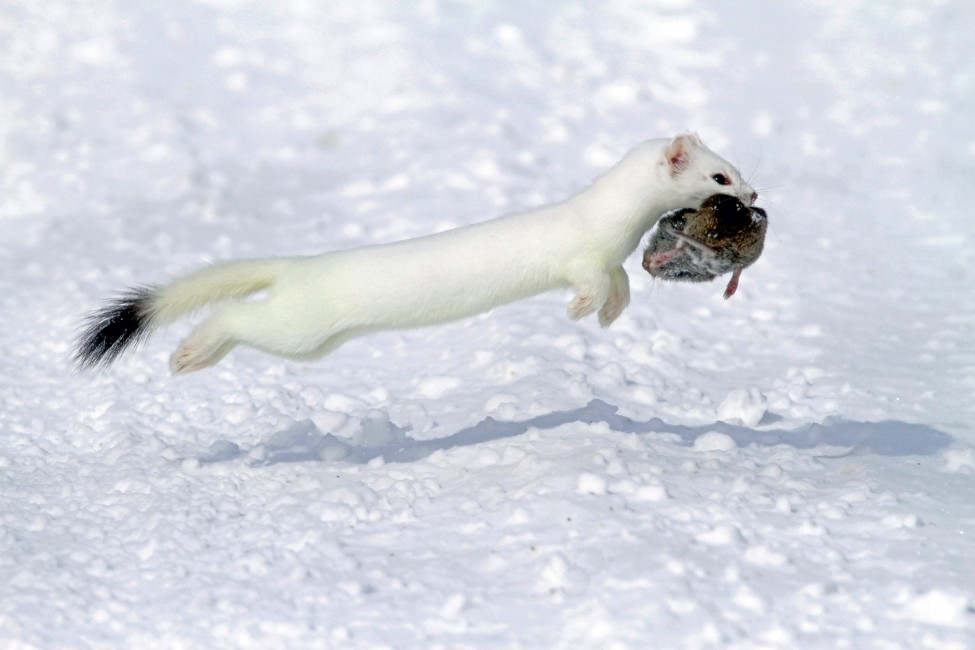 Below: The figure below shows the geographic distribution for two species with seasonal coat color changes in terms of the proportion of a local population that has a white winter coat (the rest remain in the brown pelage). In the weasel (shown on the right), in northern and montane populations everybody turns white in winter, which makes sense because of the presence of snow. In contrast, in southern and West Coast populations everybody remains brown year round, which also makes sense given the lack of snow. Interestingly, the areas in between these extremes have populations with mixtures of individuals: some individuals in the population turn white in winter, others do not. Various experimental studies have shown that these area with mixtures comprise genetic polymorphisms (i.e. winter coat color has a strong genetic basis). This figure is from a recent Science paper by Scott Mills and colleagues.

Other studies have why the natural selection drives some of these patterns—there is a higher risk of predation on animals that are mismatched in color from the habitat. In seasonal environments successful background matching involves two coat colors. Climate change has implications for how natural selection on coat color might change geographically due to changes in winter snow cover—some areas that used to have lots of snow in winter, and thus favoring the white coat type, are expected to lose that winter snow (or have fewer days with snow) as the climate warms, and a white coat type may no longer be favored. The paper by Mills et al. suggests that areas of genetic polymorphism may be particularly important as hot spots for dealing with this climate change induced natural selection.

Below: Another figure from the same paper showing the distribution of coat color types in relation to the number of days of snow at a location, for four species. Long-tailed weasel is the red curve. 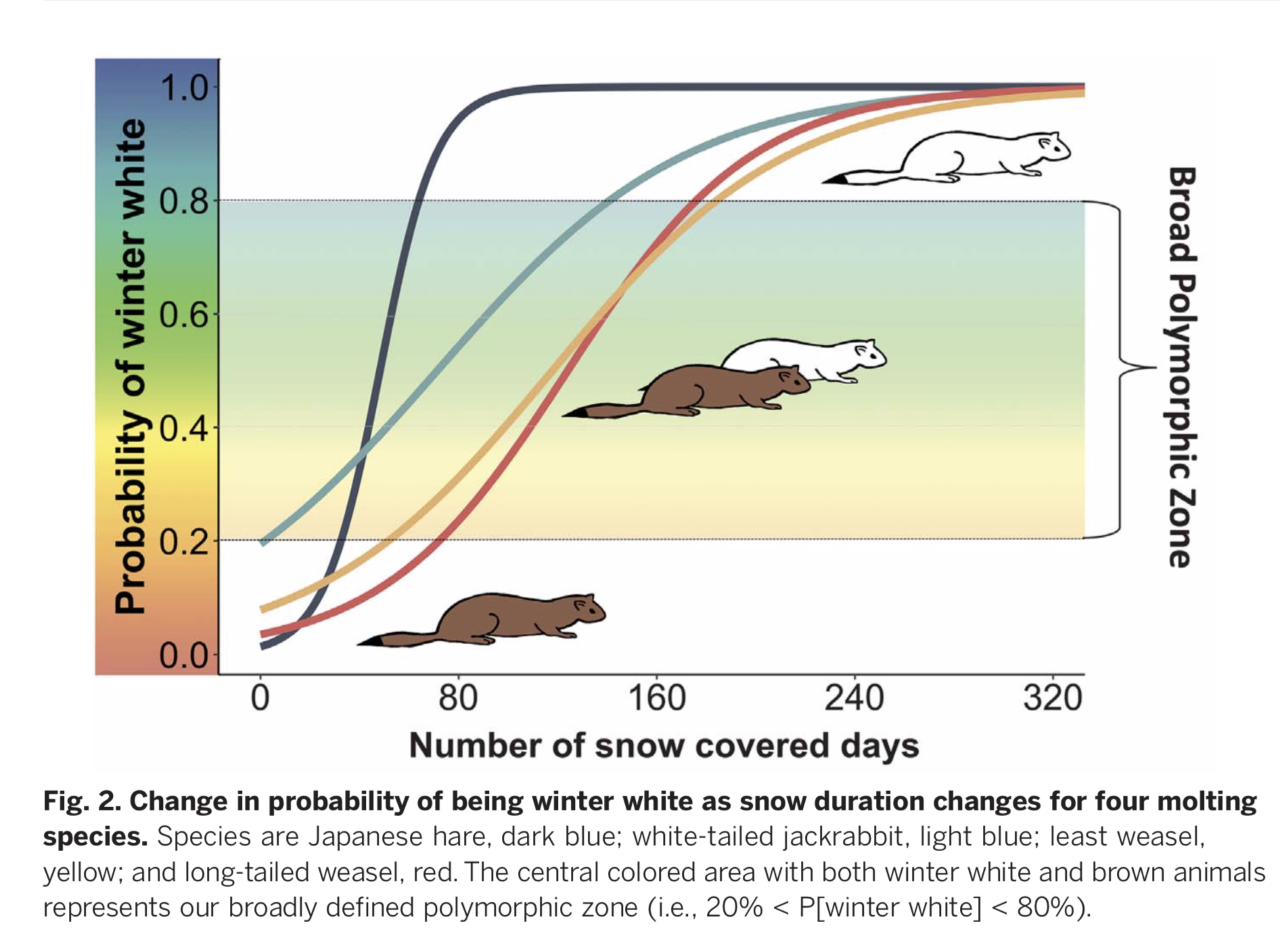