How many times must I “unpack” the anodyne columns of Anglican Priest Tish Harrison Warren before the New York Times realizes what kind of nonsense they’ve unleashed on their readers?  Today’s column, though, isn’t all that anodyne, for it floats an idea I’ve gone after for years: the idea that science and religion are not only compatible, but are in the same business: finding truth! I wrote a whole book about this deeply flawed thesis, and am grumpy at having to critique Warren’s views when she could have read my book. She didn’t.

But in fact, in trying to push her thesis, she inadvertently refutes it. Time after time she cites examples of religious belief being in conflict with science. But she pronounces that those conflicts are not real conflicts. It’s as if she describes the Vietnam war as “not a real war” because it wasn’t formally declared by Congress.

Read by clicking below on the screenshot: 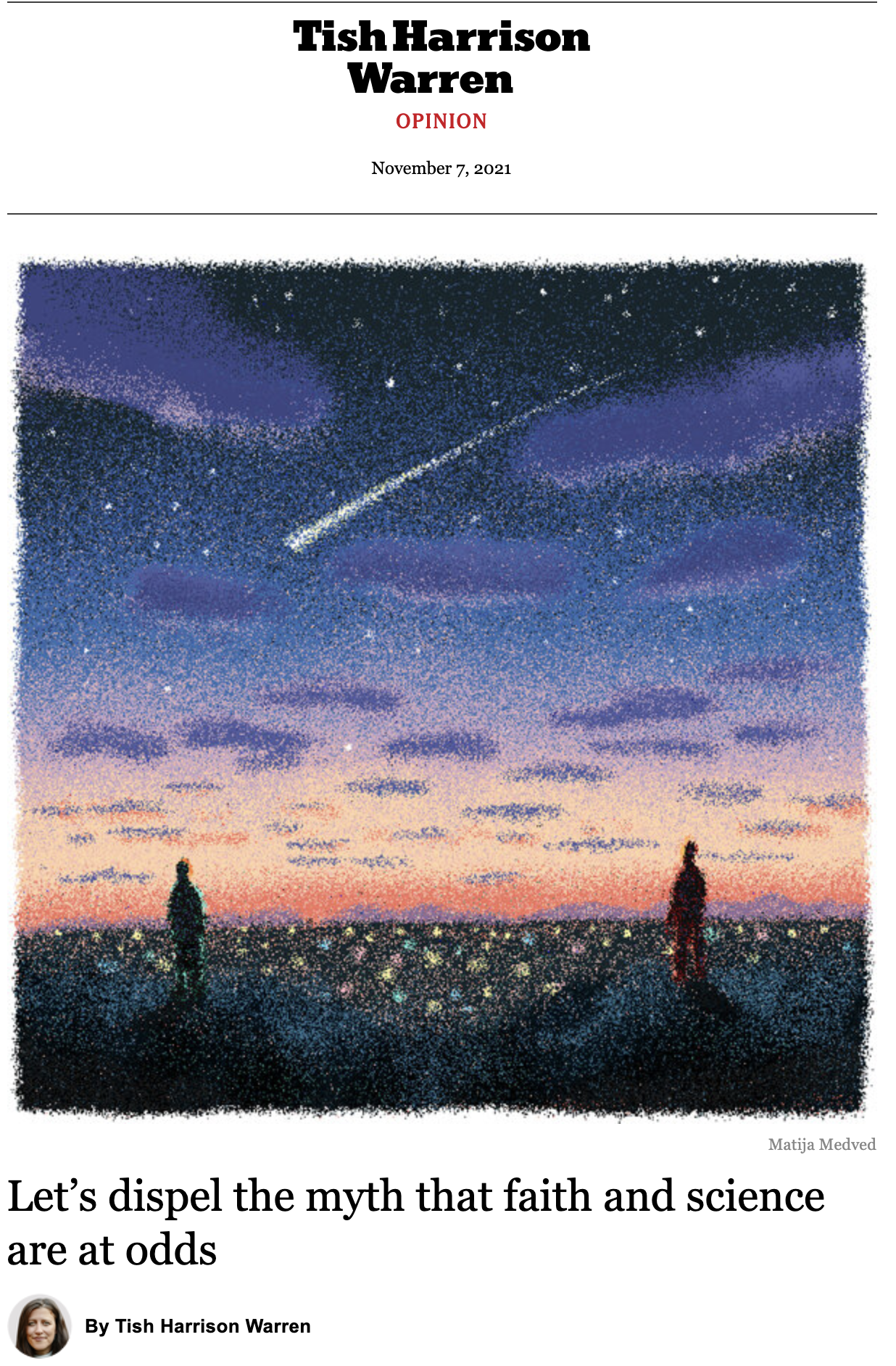 You almost have to go line by line through the piece, but I’ll spare you that. Her quotes are indented:

I have never had much interest in faith versus science debates. They simply did not resonate with me. I believe God created the world, but I never felt the need to nail down the details or method of creation. I went to a fairly conservative evangelical seminary (founded by Billy Graham himself), and even there, I was taught that Genesis 1 was more like a hymn or a poem than a science textbook. I have long been influenced by early church theologians like Augustine of Hippo, who understood the biblical creation account as primarily making theological claims instead of offering a precise explanation of cosmological origins.

She begins her piece with a statement not of fact, but of faith: “God created the world.” How does she know that? Well, let’s just say she feels it in her bones or read it in the Bible. What’s worse is the familiar claim that Augustine of Hippo read Genesis as pure metaphor. That’s not true/ As I wrote in Faith Versus Fact, Augustine, like many of the church fathers, read Genesis metaphorically as well as literally (pp 57-59). It’s true that Augustine kept debating whether the seven days of creation were literal or figurative, but he never doubted the creation of plants and animals de novo, Paradise and Adam and Eve, and the Fall.  Here’s a passage from my book in which I quote from The Works of St. Augustine, volume 13:

The narrative indeed in these books [Scripture] is not cast in the figurative kind of language you find in the Song of Songs, but quite simply tells of things that happened, as in the books of the Kingdoms and others like them. But there are things being said with which ordinary human life has made us quite familiar, and so it is not difficult, indeed, it is the obvious thing to do, to take them first in the literal sense and then chisel out from them what future realities the actual events described may figuratively stand for.

It looks as if Warren not only hasn’t read my book, but isn’t well up on the works of Augustine!

And then Warren, trying to dispel the myth that faith and science are at odds, gives evidence that they are indeed at odds!

Indeed, these past two years have exposed how the science vs. faith discourse isn’t an abstract ideological debate but a false dichotomy that has disastrous real-world consequences. According to a September Pew study, white evangelicals are the least likely religious group to get vaccinated (about 57 percent have received at least one dose of a Covid vaccine). There are certainly political reasons for this. Many white American evangelicals lean Republican, and Republicans overall are less likely to get vaccinated against Covid. But we also cannot overlook the broader context of distrust between evangelical faith communities and the scientific community.

So the Evangelical form of Christianity is in opposition to science. Why, then, is it a false dichotomy?   And, of course, 40% of all Americans accept the Genesis account of creation, with instantaneous poofing of life and a young Earth. Isn’t that a conflict? In fact, Warren scores another own goal by showing that the young are increasingly finding MORE conflict between science and religion:

A 2018 study by Barna, a Christian research and polling firm, showed that “significantly fewer teens and young adults (28 percent and 25 percent) than Gen X and Boomers (36 percent and 45 percent)” view science and faith as complementary. Young people increasingly see an essential conflict between faith and science.

[Christian astrophysicist Deborah] Haarsma told me that the rise of the creationism movement in the 1960s, led by the engineer Henry Morris, increased the skepticism between some evangelical churches and scientists. The rift continued to grow because of bioethical conflicts around issues like stem cell research and euthanasia, but more so because of a latent cultural assumption that faith and fact oppose each other. When President Barack Obama appointed Francis Collins, an evangelical Christian (and the founder of BioLogos), as head of the National Institutes of Health in 2009, some questioned whether Collins’s religious faith should disqualify him from the position.

If there are so many people who see a conflict, why are they wrong? Are they misperceiving? They’re not, and the reason is simple: there is a conflict, and that’s what my book is about. I’ll write a paragraph about that below. In the meantime, Haarsma and Warren tout the old “there are religious scientists” trope as evidence that they’re not in conflict:

It wasn’t always this way. At the outset of the Scientific Revolution, many scientists were motivated by their beliefs about God. Nicolaus Copernicus, Isaac Newton, Robert Boyle and other giants of modern science were people of faith. But, after high-profile debates over Darwin’s theory of evolution in the late 19th century, a perceived division began to emerge between religion and science. In the spectacle of the Scopes Monkey Trial in 1925, which assessed, among other things, whether a state could prohibit the teaching of evolution in schools (but was also staged as a publicity stunt by town leaders in Dayton, Tenn.), Christian beliefs and science were set up as incompatible ideas.

Yes, but everybody was religious back them. In fact, Newton was also into alchemy. Does that mean that alchemy and science are compatible, too? If science and religion are compatible, Warren should tell us why a very high percentage of scientists—much higher than the general public—are atheists. That either means that atheists are attracted to science, or that science turns believers into atheists. I think it’s a bit of both, but either way it shows some kind of incompatibility. There is an incompatibility in Francis Collins’s rejection of supernatural causes when he goes into his lab, and his embracing of completely unevidenced nonsense when he steps into his church. The kind of evidence he sees for the Resurrection wouldn’t pass muster as a scientific hypothesis.

Finally, let’s skip all the other nonsense and understand why, in my view, science and religion are incompatible. It’s actually hidden in the column:

. . . . the scientific community could be more honest about the limits of the discipline. “Sometimes people say things like, ‘If everyone would just accept the science, the world would be great,’” Haarsma said. But she notes that science doesn’t solve everything and that scientific communities have to “acknowledge the value of religion as a way of answering life’s biggest questions.”

No we don’t, because religion never answers “life’s biggest questions.” She goes on.

In the end, Haarsma said, these two communities share a goal: seeking truth. “They can find common ground in their desire to know what is true,” she suggests, “whether about nature or about God.” I asked Haarsma how faith and science entwine in her own work. Her voice sounded ebullient. As a professor of astronomy, she said, she truly sees how, in the words of Psalm 19, “The heavens declare the glory of God, and the sky above proclaims his handiwork.” That’s what scientists study, she told me, “the very handiwork of God.”

The problem, which should be obvious, is that yes, science and religion are both ways of finding out the truth about the universe, but only science has a reliable way to find those truths. If religion does tell us the truth about God (or nature), what is it? If there is a truth about God, every religion has a different take on it, so in fact there is no consensus truth. That’s why there are so many religions, for crying out loud! Is there one God, like Warren believes, or many, as Hindus and other polytheists believe? What’s the answer, Reverend Warren? And how do you know the answer?

Wanting to know what is true is not the same as having the ability to find truth. Science does have that ability, and religion doesn’t.  Warren may feel that the tenets of her Anglican faith and its claims about God and Jesus are “true”, but can she then tell us why the Muslims, Hindus, and Scientologists are wrong?

At least in science, something doesn’t become provisional truth—the only kind we have—until it’s repeatedly confirmed. Likewise, repeated failure to confirm, or direct falsification, means a scientific hypothesis cannot be taken as true. We have a toolkit for determining truth: observation, testing, experimentation, replication, consensus, and so on. Religion has only authority, propaganda, and scripture, which conflict with other faiths’ authority, propaganda and scripture.

And that is why science and religion are in conflict. If Warren really thinks that religion can answer life’s biggest questions, then let us by all means have the answers!

And why does the New York Times try to inflict this kind of harm on us? By flouting reality and favoring fantasy, Warren’s claims are nothing other than violence!