A week ago I called attention to a tweet by the American Civil Liberties Union (ACLU) that quoted but redacted some words by the late Supreme Court Justice Ruth Bader Ginsburg (RBG). The ACLU made six changes in just one short quote, including an omission. Here’s what they tweeted:

With Justice Ruth Bader Ginsburg’s death, we lost a champion for abortion and gender equality. And on the anniversary of her death, the fight to protect abortion access is more urgent than ever. pic.twitter.com/vIKadIHouN

Here are her real words, which according to Michelle Goldberg’s NYT article below, were uttered during RBG’s 1993 Senate confirmation hearings. As usual, RBG didn’t pull any punches!

“The decision whether or not to bear a child is central to a woman’s life, to her well-being and dignity. It is a decision she must make for herself. When the government controls that decision for her, she is being treated as less than a full adult human responsible for her own choices.”

There are six changes, five in brackets, getting rid of “woman” and “her” (substituting “persons” and “people” for “woman” and “they” or “their” for three “hers”).  The missing part of the quote, which is “It is a decision she must make for herself”, could have been altered to “It is a decision they must make for themselves,” but that would add two more sets of brackets and make the whole quotation look really weird.

The explanation is simple and obvious; they are removing RBG’s reference to women having babies since the ACLU, whose mission now includes a substantial amount of transgender activism, is onboard with the idea that transmen, who are now given the pronouns “he” and “men”, can have babies. And indeed, transmen have given birth.

The ACLU is heavily into transsexual rights, which is fine since those are civil rights, but they’ve gone overboard on this before (one of their staff attorneys called for the censorship of Abigail Shrier’s book, and did so again by drastically changing RBG’s words. They’re also slowly but surely removing themselves from defending the First Amendment.  Here’s the tweet (now removed) by their chief attorney for transsexual issues: 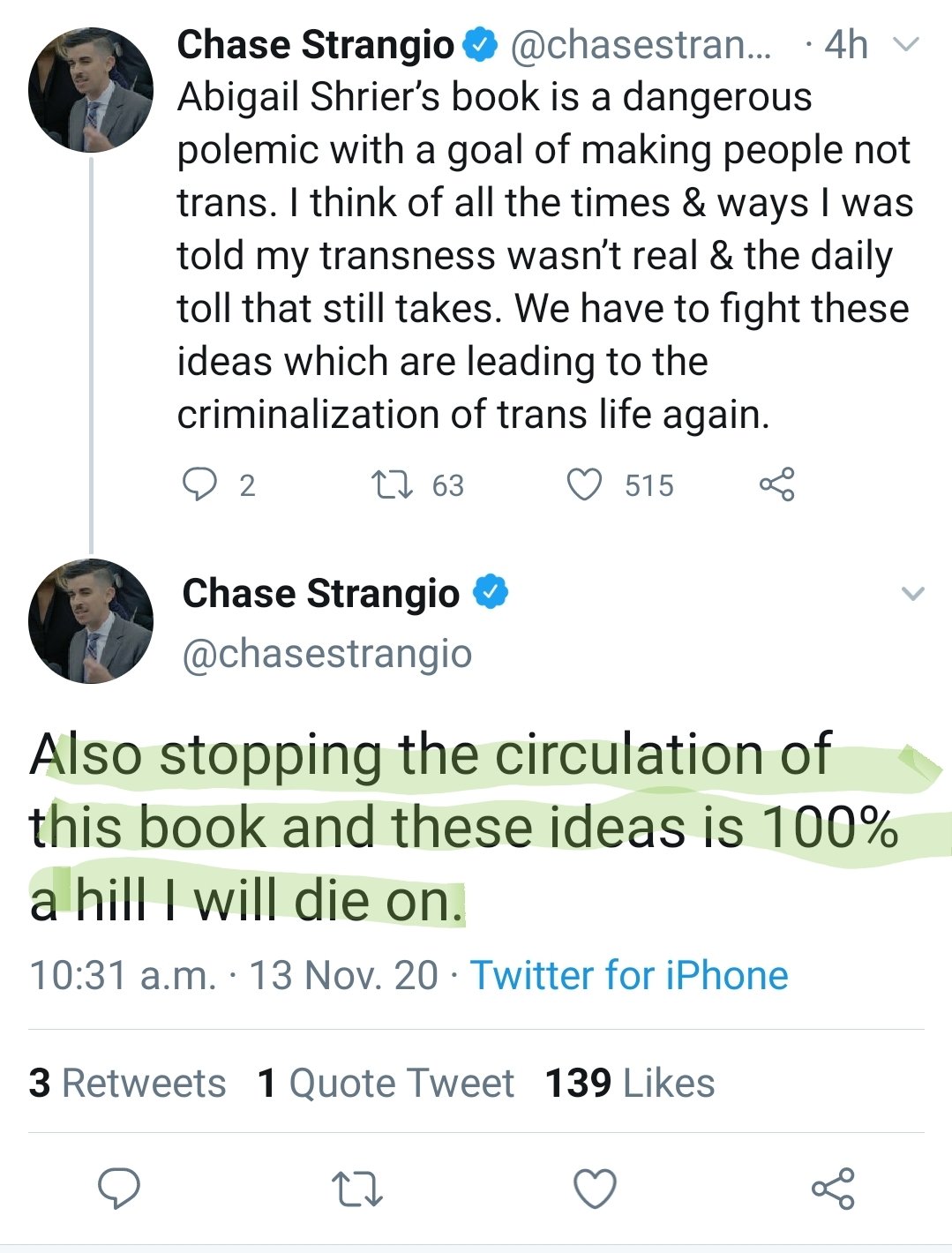 I’m pretty fed up with the ACLU, though they’re still doing some good work. But back to the RBG redaction. In her op-ed, Michelle Goldberg (click on screenshot below) puts her finger on two reasons why the alteration of RBG’s words was misleading and invidious.

While Goldberg bends over backwards to approve of gender-inclusive language, she criticizes the ACLU’s changes for two reasons. The first one I raised in my post; the second is one that is more likely to be spotted and raised by a woman.

This was a mistake for two reasons, one that’s easy to talk about, and one that’s hard.

The easy one is this: It’s somewhat Orwellian to rewrite historical utterances to conform to modern sensitivities. No one that I’m aware of used gender-neutral language to talk about pregnancy and abortion in 1993; it wasn’t until 2008 that Thomas Beatie became famous as what headlines sometimes called the “First Pregnant Man.” There’s a difference between substituting the phrase “pregnant people” for “pregnant women” now, and pretending that we have always spoken of “pregnant people.”

What’s more difficult to discuss is how making Ginsburg’s words gender-neutral alters their meaning. That requires coming to terms with a contentious shift in how progressives think and talk about sex and reproduction. Changing Ginsburg’s words treats what was once a core feminist insight — that women are oppressed on the basis of their reproductive capacity — as an embarrassing anachronism. The question then becomes: Is it?

Goldberg clearly thinks “no, it’s not an embarrassing anachronism”, but for a reason that some trans-activists might oppose. (Bolding below is mine.)

A gender-inclusive understanding of reproduction is in keeping with the goal of a society free of sex hierarchies. It is one thing to insist that women shouldn’t be relegated to second-class status because they can bear children. It’s perhaps more radical to define sex and gender so that childbearing is no longer women’s exclusive domain.

Yet I think there’s a difference between acknowledging that there are men who have children or need abortions — and expecting the health care system to treat these men with respect — and speaking as if the burden of reproduction does not overwhelmingly fall on women. You can’t change the nature of reality through language alone. Trying to do so can seem, to employ a horribly overused word, like a form of gaslighting.

“One is not born, but rather becomes, a woman,” Simone de Beauvoir wrote. You can interpret this to support the contemporary notion of sex and gender as largely matters of self-identification. Or you can interpret it as many older feminists have, as a statement about how the world molds you into a woman, of how certain biological experiences reveal your place in the social order, and how your identity develops in response to gender’s constraints.

Seen this way, a gender-neutral version of Ginsburg’s quote is unintelligible, because she was talking not about the right of all people to pursue their own reproductive destiny, but about how male control of women’s reproductive lives makes women part of a subordinate class. The erasure of gendered language can feel like an insult, because it takes away the terms generations of feminists used to articulate their predicament.

The way I would answer this myself is that childbearing remains the domain of biological women (i.e., people who, when born, fit into the biological definition of “female”), even if they’ve become transsexual men.  This is what I think Goldberg means by saying, slyly, that “you can’t change the nature of reality through language alone.”

Her real objection, which I’ve put in bold, is that reproduction is but one of women’s “biological experiences” (I suppose menstruation is another, though I don’t see oppression as a “biological experience”) that cannot be had by biological men, and by “women” she means the term as it was used by earlier feminists. By saying that a man can become pregnant, the oppressor then gains membership in the class (“men”) that many feminists saw and still see as oppressors.

But to Goldberg, “full” neglects history. What really irks her (and I can understand and sympathize with her position), is that biological women can not only be called “men”, but assumed to be men in every respect, including, thinks Goldberg, in their historical position as oppressors of women. (By the way, I don’t think that the ACLU quote “erased” gendered language, which it didn’t, but erased sexed language.)

Goldberg’s contortions to avoid seeming “transphobic”, I think, has obscured her point, which is a semantic one. (Or so I think: I may have misinterpreted her point.)

And regardless, I think that she’s still going to be demonized for writing this column.  But to her (and the ACLU’s) credit, the organization seems to go along with her. She reports:

On Monday, Anthony Romero, executive director of the A.C.L.U., told me he regrets the R.B.G. tweet, and that in the future the organization won’t substantively alter anyone’s quotes. Still, he said, “Having spent time with Justice Ginsburg, I would like to believe that if she were alive today, she would encourage us to evolve our language to encompass a broader vision of gender, identity and sexuality.”

This may very well be the case. It’s also the case that she spoke specifically about women for a reason.

The problem is that the activists who approve of this redaction don’t care about altering history, even “for a reason”.  They just want to make historical language conform to modern norms.

42 thoughts on “ACLU admits it screwed up by changing RBG’s words; Michelle Goldberg explains why the changes were misleading”