I’ve written before about the newish movie “Mighty Ira“, a documentary about former American Civil Liberties Union (ACLU) head Ira Glasser and his involvement in civil-liberties litigation in the 1970s (see my posts here and here). I highly recommend the movie, as it’s not just about Glasser or the ACLU, but also involves baseball, Jackie Robinson, and William F. Buckley. If you’re into free speech or civil liberties, and want to see them defended as they should be defended, see the movie.

In the movie, Glasser makes an offhand comment or two about how the ACLU has changed direction since he was its head, and implies he doesn’t much approve of that change. This becomes clearer in the new Tablet article below, which expands on and details something I’ve said for a while: the ACLU, like the Southern Poverty Law Center, is going down the tubes. And they’re both disintegrating for the same reason: Wokeness, i.e., they’re abandoning their original mission to engage in political activities promoting aspects of “social justice” not connected with their avowed missions.

The ACLU long had a special place in my heart because they represented me for free when I discovered I’d been drafted illegally as a conscientious objector in 1972. With their help, we initiated a successful class action suit, and it got many COs who were in my predicament released from required service. (I’ve told this story before.)

Now, however, the ACLU is making noises about how free speech might not be all it’s cracked up to be. And they’re adopting a big-time transgender agenda headed by lawyer Chase Strangio, described below. With the latter, the ACLU is taking the distinctly odd position that medically unmodified biological men who identify as women should be treated for all purposes as biological women, including sports. (The “civil liberties” of the women who have to compete against these trans women are, of course, neglected.) The original mission of the ACLU was to defend the First Amendment, no matter how offensive someone’s free speech might be (ergo they defended the Nazis in the famous Skokie case). Now they’re engaged in dismantling Title IX and backing off on free speech. 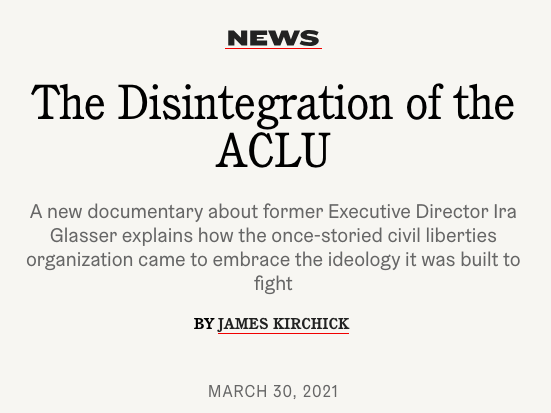 A lot of the article recounts Glasser’s history in his days with the ACLU, and sketches what the movie is about, but there’s also some telling criticism of the organization itself as its changed its mission. This is what they’re up to now:

“My successor, and the board of directors that have supported him, have basically tried to transform the organization from a politically neutral, nonpartisan civil liberties organization into a progressive liberal organization,” Glasser says about Anthony Romero, an ex-Ford Foundation executive who continues to serve as the ACLU’s executive director. According to former ACLU national board member Wendy Kaminer in her 2009 book Worst Instincts: Cowardice, Conformity, and the ACLU, Romero and his enablers routinely engaged in the sort of undemocratic and unaccountable behavior practiced by the individuals and institutions the ACLU usually took to court, like withholding information (concerning a breach of ACLU members’ privacy, no less), shredding documents in violation of its own record-preservation and transparency procedures, and attempting to muzzle board members from criticizing the organization publicly. (“You sure that didn’t come out of Dick Cheney’s office?” remarked the late, great former Village Voice columnist and ACLU board member Nat Hentoff of this last gambit). Eerily prescient, Worst Instincts foreshadowed the hypocrisy and fecklessness that has since come to characterize the leadership of so many other, previously liberal institutions confronted by the forces of illiberalism within their own ranks.

In 2018, the ACLU spent over $1 million on advertisements likening Supreme Court Justice nominee Brett Kavanaugh to Bill Cosby and Harvey Weinstein, essentially accusing him of crimes for which he was never tried or convicted. More egregious than their brazen political partisanship was the way in which the ads traduced the presumption of innocence, a bedrock of American jurisprudence and a principle the ACLU was founded to uphold. Asked why his organization was willing to further violate its tradition of political neutrality, Faiz Shakir, a Democratic Party operative then serving as the ACLU’s national political director, was brutally honest. “People have funded us and I think they expect a return,” he said. Glasser also points to the group’s decision to run a television advertisement supporting then-Georgia gubernatorial candidate Stacey Abrams as a telling sign of its transformation. “I mean, I love Stacey Abrams,” Glasser told me. “She has become my favorite political character in the country. But the ACLU has always stayed away from that. Nobody attacked Richard Nixon or Ronald Reagan on their civil liberties violations more vigorously and strenuously than I did. But we always stayed away from political partisanship, and it was critical for the ACLU, virtually for all its history, to have standards that were as applicable to those most of us politically supported as to those who most of us politically opposed.”

I wrote about this incident in 2018, which was the first sign to me that the ACLU was backing off on a full-fledged defense of the First Amendment. The stand of the old ACLU resembled that of the University of Chicago’s Founding Principles: there was one overriding principle that trumped almost everything else: the fostering of a climate of free speech, thought, and discussion. Our Kalven Report made it another principle for the University to avoid taking stands on political, moral, and ideological issues, which were seen as compromising this primary mission by chilling the speech of dissenters. And that is precisely what the ACLU is doing now: allowing speech to be chilled, or even promoting, as does Chase Strangio with his censoriousness, the chilling of speech (see below).

Accompanying this influx of new members and money, however, were pressures for the group to become another run-of-the-mill #Resistance outfit. In 2017, the ACLU of Virginia had supported the right of white nationalists to rally in Charlottesville. But once the rally turned violent, the national ACLU circulated an internal document with new “case selection guidelines,” stipulating, “Speech that denigrates such [marginalized] groups can inflict serious harms and is intended to and often will impede progress toward equality.” Before agreeing to take a free speech case, the document continued, the ACLU would now consider “the potential effect on marginalized communities,” whether the speech advances the goals of speakers whose “views are contrary to our values,” and the “structural and power inequalities in the community in which the speech will occur.” A manifestation of the ACLU’s new approach can be seen in the decision by one chapter to intervene in a high-profile case at Smith College, where the group amplified bogus claims of racism leveled by a student against some of the school’s custodial and cafeteria staff.

That’s the Wokeness that’s bringing down the organization: “Free speech for all, so long as they’re not the Oppressor.” The ACLU didn’t used to consider whether speech was “contrary to our values,” for its principle was that regardless of the values of the members, the First Amendment must be defended for all speakers.

If the public face of the ACLU was Ira Glasser during the latter part of the previous century, today that honor can be claimed by a staff attorney named Chase Strangio. Named one of the 100 most influential people on the planet by Time magazine last year, Strangio is the ACLU’s deputy director for transgender justice. Like many activists consumed by this issue, he is uncompromising in demanding strict adherence to a set of highly contestable orthodoxies, and merciless toward anyone who dares question them. Two women who have—J.K. Rowling, the author of Harry Potter, and Abigail Shrier, author of a book about the role of “peer contagion” in the rising rate of teenage girls declaring themselves transgender—are “closely aligned with white supremacists in power,” Strangio declared on Twitter, offering not a shred of evidence for this claim. “Stopping the circulation of [Shrier’s] book and these ideas is 100% a hill I will die on,” he wrote, a rather bizarre position for an ACLU employee to endorse. Strangio later deleted the tweet, explaining that his intention was not to call for the government to ban Shrier’s book, but rather “to create the information climate for the market to be more supportive of trans self-determination than the alternative.”

There’s a lot more, and I’ve already excerpted a much more than I should have; but these passages especially resonate with me.  We need someone like Ira Glasser back, but good luck in finding any leader in these troubled days to support an uncompromising defense of the First Amendment.

But congrats to Tablet, which is doing some damned good reporting these days.

20 thoughts on “How the ACLU got woke, became political, and changed its mission”