Ira Glasser was head of the American Civil Liberties Union (ACLU) from 1978 until 2001, and his name is familiar to those who keep an eye on civil liberties. As Wikipedia notes:

The ACLU website credits Glasser with transforming the American Civil Liberties Union from a ‘mom and pop’-style operation concentrated mainly in a few large cities to a nationwide civil liberties powerhouse.” Indeed, at the end of Glasser’s presidency the ACLU maintained staffed offices in all fifty states, the District of Columbia, and Puerto Rico; when he became director in 1978, only about half of the states had staffed offices. Glasser raised the ACLU’s annual income from $4 million in 1978 to $45 million in 1999.  Although the ACLU had protected civil liberties generally through litigation, Glasser expanded the focus of the ACLU’s activities through lobbying and public education programs.

There’s a new movie about Glasser that I haven’t seen yet (but will), the 2020 “Mighty Ira“, 100 minutes long. And, presumably because of the movie, Reason.com‘s Nick Gillespie just interviewed Glasser. At the site below (click on screenshot), you can hear a 71-minute podcast with Glasser (I haven’t listened yet), or read a shorter transcript of his remarks. I’ll mention what I think are the most relevant and interesting things he has to say in the transcript, and give a few excerpts. 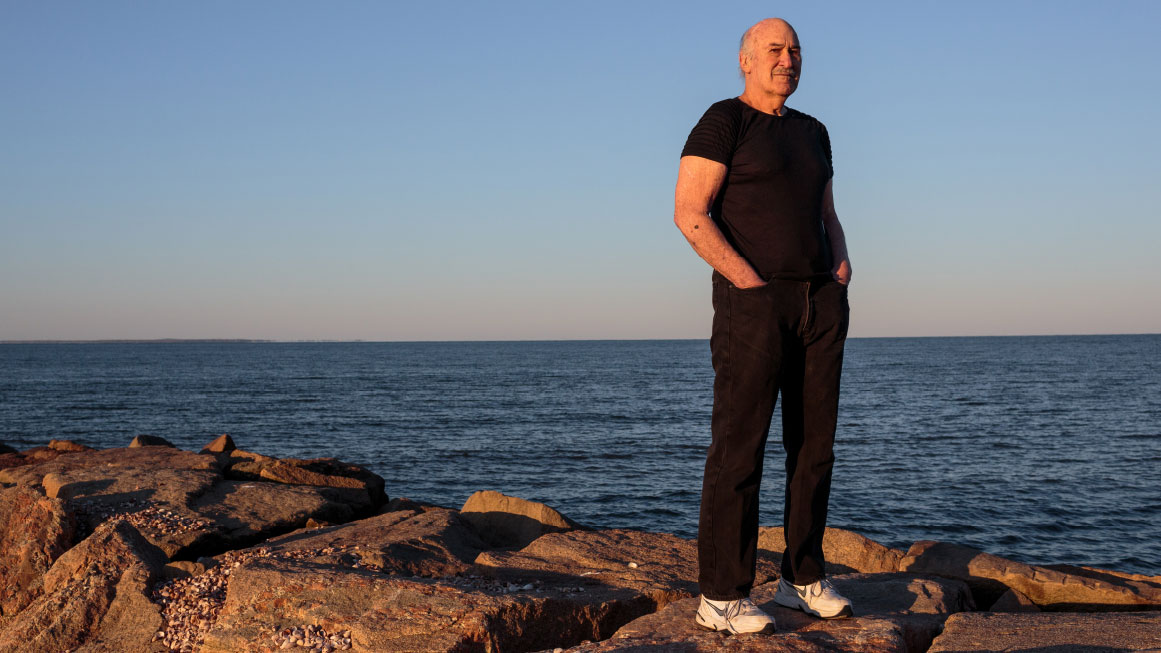 Glasser dwells at length at what happened in Skokie in 1977, where everyone thinks the ACLU defended the American Nazi Party’s right to march through Skokie, Illinois, and that the march took place. In fact, it didn’t, because the ACLU won another case—in Chicago—that prohibited the city (and thus Illinois) from forcing demonstrating groups to post a $250,000 bond as security against damage. No company would cover such a bond, so that effectively banned public demonstrations. The ACLU took that to court and won. They also won the right of the Nazis to march in Skokie (Skokie is not Chicago, but its own city), and, given the choice, the Nazis decided to march in Marquette Park, Chicago. It’s useful to learn what really happened, as Glasser was in charge when this was happening, and it’s an iconic but misreported case of free speech.

Glasser also describes how the ACLU defended the Klan’s right to march in Mississippi. When I was younger, the organization would, if they had the lawyers and dosh, defend anybody’s speech that was in danger of being suppressed by the government, no matter how odious the speech and the speaker seemed. And that’s what the First Amendment is for.

As I reported in 2018, Reason.com published a leaked memo from the ACLU suggesting that they might be backing off of their traditional mission of defending everyone’s free speech in favor of “social justice” speech. That is, the ACLU was changing course, deciding that some speech might not be worth protecting, or at least not be worth defending by their organization. When asked about this, Glasser gave an answer that didn’t really thrill me (Gillespie’s questions to Glasser are in bold):

In 2018, a leaked ACLU memo came out where the group seemed to be walking away from the idea of viewpoint neutrality when it came to protecting speech. The ACLU now advises its affiliates to consider the content of speech and whether it advances the group’s goals before deciding whether to defend the right to speak. How do you feel about that?

I’m 20 years gone from steering this ship. I don’t really know a lot more about what’s going on than you do. That memo did in fact introduce a content-based consideration to whether they would take a free speech case, enough so that it made me wonder, “If Skokie happened again, would the ACLU take it?” It’s not politically outrageous during times like these for the ACLU to want to become more of a political organization than a civil liberties organization. That’s not surprising, and there’s nothing evil about it. An organization has a perfect right to change its agenda or mission, to say, “The times require us to be something different than what we were.” The ACLU has taken a few steps toward doing that, I think, but they’ve denied it.

There are a lot of progressive political groups out there. I’m glad to have more of them, because that’s my politics too. But there’s only one ACLU. It doesn’t matter on whose behalf the immediate client is. What matters is you have to stop the government from gaining the power to decide. It’s taken 100 years for the ACLU to develop from the 30 or 40 people that started it in 1920 to the powerhouse of civil liberties that it is today. If the ACLU isn’t there for speech, who will be?

I don’t quite get why—hard-line free-speech advocate that he is—Glasser thinks it’s okay that the times could create a useful change in the ACLU’s mission, but a change that dilutes its historical defense of free speech. It’s a bit of a confusing answer, because I can also read in it that Glasser doesn’t think it’s okay (look at his last sentence). Perhaps because he may still have strong ties to the ACLU, Glasser doesn’t want to criticize it so publicly.

Glasser is a social-justice advocate of the right type: he believes in free speech but also in fighting for the oppressed, for racial segregation was why he got into civil liberties in the first place. He reiterates what I see as the right reasons for defending everyone’s speech, and then talks about the intersection (pardon that word) between social justice and civil liberties.

A few words about the enemies of free speech:

It wasn’t until my 30s that I began to understand free speech, that the real antagonist of speech is power. The only important question about a speech restriction is not who is being restricted but who gets to decide who is being restricted—if it’s going to be decided by Joe McCarthy, Richard Nixon, Rudy Giuliani, [President Donald] Trump, or [Attorney General] William Barr, most social justice advocates are going to be on the short end of that decision. I used to say to black students in the ’90s who wanted to have speech codes on college campuses that if [such codes] had been in effect in the ’60s, Malcolm X or Eldridge Cleaver would have been their most frequent victim, not David Duke.

To a point. I’ve seen vigorous advocacy demonized and suppressed on the grounds that it wasn’t civil. I once had somebody at the ACLU propose a new policy for us that would oppose speech that demeaned and insulted people. I got up at that conference and said, “Well, every time I open my mouth, I’m looking to demean or insult somebody because of their views, and I’m about to do it again.” I proceeded to attack that, because in the hands of malevolent power, a statute like that would suppress speech in the name of civility.

And yes, that’s what colleges are doing: prioritizing civility (often described as “harm”) above speech.

I found this interesting:

[Glasser]: Next to slavery and the homicidal, genocidal destruction of American Indians, the worst civil liberties violation that occurred in this country en masse was the incarceration of Japanese-American citizens during World War II. You know which president signed that executive order? Franklin Delano Roosevelt, who was a god in my parents’ house because he had saved them from ruin financially. But for me, the antagonist of civil liberties and free speech is not this or that party; it’s power, whoever holds it.

That, of course, is one of the reasons that demonstrating groups and “social justice warriors” are always about power as well as justice, for if you have power you can keep people from saying things you think shouldn’t be heard.

Free speech and social justice. I found this long exchange quite bracing, not because of the student diversity, which is itself good, but because of Glasser’s response. But to be sure, the students are the future and Glasser is the past. So now I’m depressed again!

I grew up in an era where your broad view of the value of free speech was culturally dominant. What has happened to change that?

I went to one of the half-dozen best law schools in the country a year or two ago to speak. And it was a gratifying sight to me, because the audience was a rainbow. There were as many women as men. There were people of every skin color and every ethnicity. It was the kind of thing that when I was at the ACLU 20, 30, 40 years ago was impossible. It was the kind of thing we dreamed about. It was the kind of thing we fought for. So I’m looking at this audience and I am feeling wonderful about it. And then after the panel discussion, person after person got up, including some of the younger professors, to assert that their goals of social justice for blacks, for women, for minorities of all kinds were incompatible with free speech and that free speech was an antagonist.

As I said, when I came to the ACLU, my major passion was social justice, particularly racial justice. But my experience was that free speech wasn’t an antagonist. It was an ally. It was a critical ally. I said this to the audience, and I was astonished to learn that most of them were astonished to hear it—I mean, these were very educated, bright young people, and they didn’t seem to know this history—I told them that there is no social justice movement in America that has ever not needed the First Amendment to initiate its movement for justice, to sustain its movement for justice, to help its movement survive.

Martin Luther King Jr. knew it. Margaret Sanger knew it. [The labor leader] Joe Hill knew it. I can think of no better explication of it than the late, sainted John Lewis, who said that without free speech and the right to dissent, the civil rights movement would have been a bird without wings. And that’s historically and politically true without exception. For people who today claim to be passionate about social justice to establish free speech as an enemy is suicidal.

Amen! That three-paragraph answer should be distributed to every campus and taught as part of the “free speech” seminar I’d like to see accompanying the usual indoctrination given to college students in their first days on campus.

UPDATE: I’m told by reader Ben that the talk Glasser describes above was given at the University of Chicago Law School. Here’s Glasser talking to Glenn Greenwald about the talk and his movie.

15 thoughts on “An interview with ACLU great Ira Glasser”