It looks as if the ritzy private secondary schools are beginning to take their behavioral cues from the ritzy private universities like Swarthmore, Yale, Princeton, and Haverford. In this case the ritzy private venue is the Dalton School in Manhattan, a high-class college prep school on the upper East Side. At Dalton, tuition is about the same as at the Ivy-League colleges (Dalton students pay $54,180 per year for tuition, and live at home). It’s also progressive and, as Wikipedia says, “is known for the diversity of its staff and students.”

What’s going on at Dalton, though, is in some ways worse than what’s happening at places like the Ivies, because the students’ parents, who want some return for their money, are threatening to pull their students out of the school after the latest fracas, which started when the school decided to go all-virtual last semester. Other fancy private schools, which abound in New York City, are still holding live classes, and Dalton parents don’t want to pay $54K per year to have their kids sit in front of computers. (The school goes from kindergarten through grade 12, which is 13 years, for a total of at least $650,000 for a full ride.)

Further, since the school is now in the process of meeting the protestors’ demands, the quality of education will also drop, and parents send their kids to Dalton so they can get into a really good college. That won’t happen if Dalton’s reputation suffers (as is already happening), and if the school lowers the standards for achievement (which the protestors want).

But let’s back up. Why are there protests at Dalton? These are well summarized in several pieces. The best one is from the website The Naked Dollar, but there are shorter pieces at  Bloomberg News and The New York Post. Otherwise, you’ll have to go to right-wing sites. But all the pieces agree about what happened. 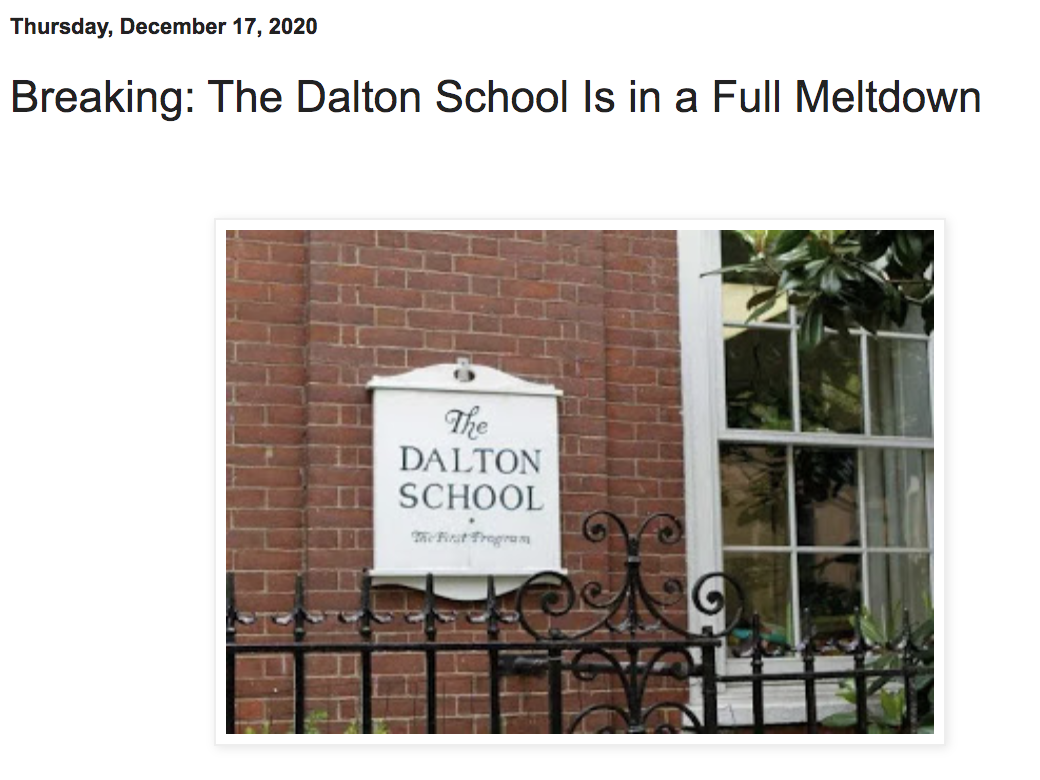 The backstory: Because of the pandemic, Dalton decided to shut down this year, with all classes going virtual. The parents got upset and sent a petition to the school asking for re-opening, especially because similar private secondary schools in NYC were open for live classes. Dalton did say they planned to re-open, but that made things really blow up. The faculty and staff argued that re-opening is racist because faculty and staff of color say they have a longer commute than do white teachers and staff, exposing them to greater risks of viral infection. The same is probably true of black and Hispanic students, though there are no data.

A big roster of Dalton’s faculty, staff, and administrators then issued a very long and detailed series of demands, which you can see here. The Naked Dollar link above summarizes the most important ones in the list below (I’ve made a few comments which are flush left):

Actually, the petition demands that the school “expand the office of Diversity, Equity, and Inclusion to include up to 12 full-time positions”. Since there’s already an office with some staff, that doesn’t mean twelve new officers. Still, 12 full-time officers is a big staff for a school that has just 1300 students.

This is a really sore point with donors and trustees, as well as with parents. It means that if you donate a lot of money to the school, half of it will immediately go into a fund for New York Public Schools. You have no choice about this, which means that if you want to support just Dalton itself, you have to give twice the amount of money you planned to give. This requirement only kicks in if, by 2025, Dalton’s study body is not “representative of New York City in terms of gender, race, socioeconomic background and immigration status”.

These are called “leveled courses” at Dalton, and it’s true that if, by 2023, “membership and performance of Black students are not at parity with non-Black students, leveled courses should be abolished.” This makes no sense to me at all, for it gives sole responsibility to the faculty to achieve that equity, despite any disadvantages black students may come in with due to their backgrounds. In other words, it punishes everyone and achieves nothing useful.

The list is even more comprehensive than lists tendered by college protestors at places like Haverford and Swarthmore, and is especially ironic because, as the author of the website above says (their emphasis),

. . .Dalton has long been one of the most progressive schools in the country. They have actively encouraged the sort of thinking that is now biting them in the ass. And the obvious irony is that if Dalton is “systemically racist,” a belief they themselves promote, it is progressives who bear the responsibility.

When progressive institutions embrace revolutionary ideologies, as Dalton has done, they fail to appreciate that the revolution comes for them first. The scaffolding is being built on East 89th street.

Well, I don’t know that much about Dalton, but there are lots of alternative private college-prep schools in the area, and some predict that as many as 30% of students may be pulled out of Dalton by disaffected parents. What’s worse is that, like Evergreen State, Dalton’s reputation may suffer permanent damage from both dilution of standards and the hegemony of the protestors, and, like Evergreen, Dalton’s input of money could be seriously reduced, leading to layoff of faculty and staff.

Here’s a photo of “Big Dalton,” the building housing facilities for grades 4-12 (photo from Wikipedia): 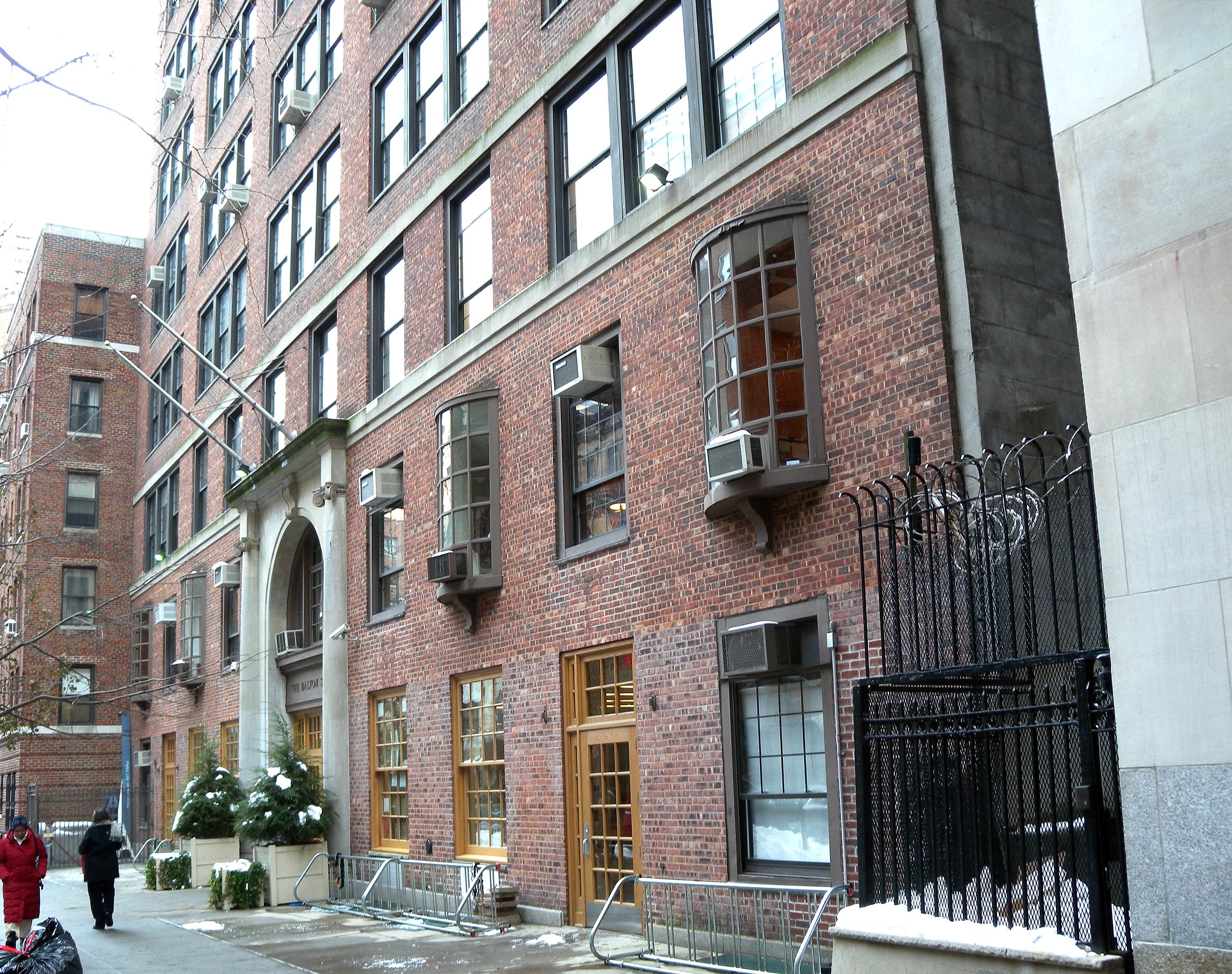