It was pointed out to me that Lehigh University in Pennsylvania has a website from 2016 that discusses the content of letters of recommendation written by academics. Part of our job is to write recommendations for our students or technicians—letters to go to graduate school, to medical school, for industry, for jobs as technicians, and so on. These are quite hard to write, especially if the applicant isn’t a star but is decent.

My policy has been that if a student is hopeless, I tell them that I simply cannot write a letter (without saying, “because I don’t want to ruin your career if others feel differently”). For borderline students who have both virtues and problems, I will agree to write a letter, and try to be as honest as possible. For uniformly excellent people who I really want to get the position, I’m famous for my long letters of recommendation that go into great detail about the person’s accomplishments, figuring that the length demonstrates how well I know the person. (It’s not unusual for such a letter to run six single-spaced pages, and of course nobody reads them in their entirety because there are always many applicants.) I think many faculty have a policy like mine.

Until now, I never worried about the specific words I used in my letters, but then I saw this website (click on it):

Have you wondered if the letter you are READING- or the letters you are WRITING – are inadvertently perpetuating implicit biases that could reduce the likelihood of the candidate getting a fair chance at the new opportunity?  This one pager summarizes some facts and ideas about letters of recommendation. You can also put your own letters through this online gender bias calculator.The calculator was inspired by presentations on research organized by AWIS; several articles and blog posts share personal reactions to learning of this phenomenon as well as the tool.

It’s worth taking this into account, with three caveats. But it does helps to know what words are perceived in what way by recipients, so the “one pager” is useful to read.

The problems are these. First, given that academia is now preferentially looking for female applicants (this will change as the proportion of male students in college keeps shrinking), a letter with female-biased words may not “perpetuate implicit bias”.  More important, suppose you run one of your letters thorough the linked “gender bias calculator”,  which you can find at the link above or by clicking on the screenshot below. It was made by Tom Force:

As a test, I ran through it a long letter I wrote a while back for one of my female undergraduate research assistants, who wanted to go to medical school. I got this result: 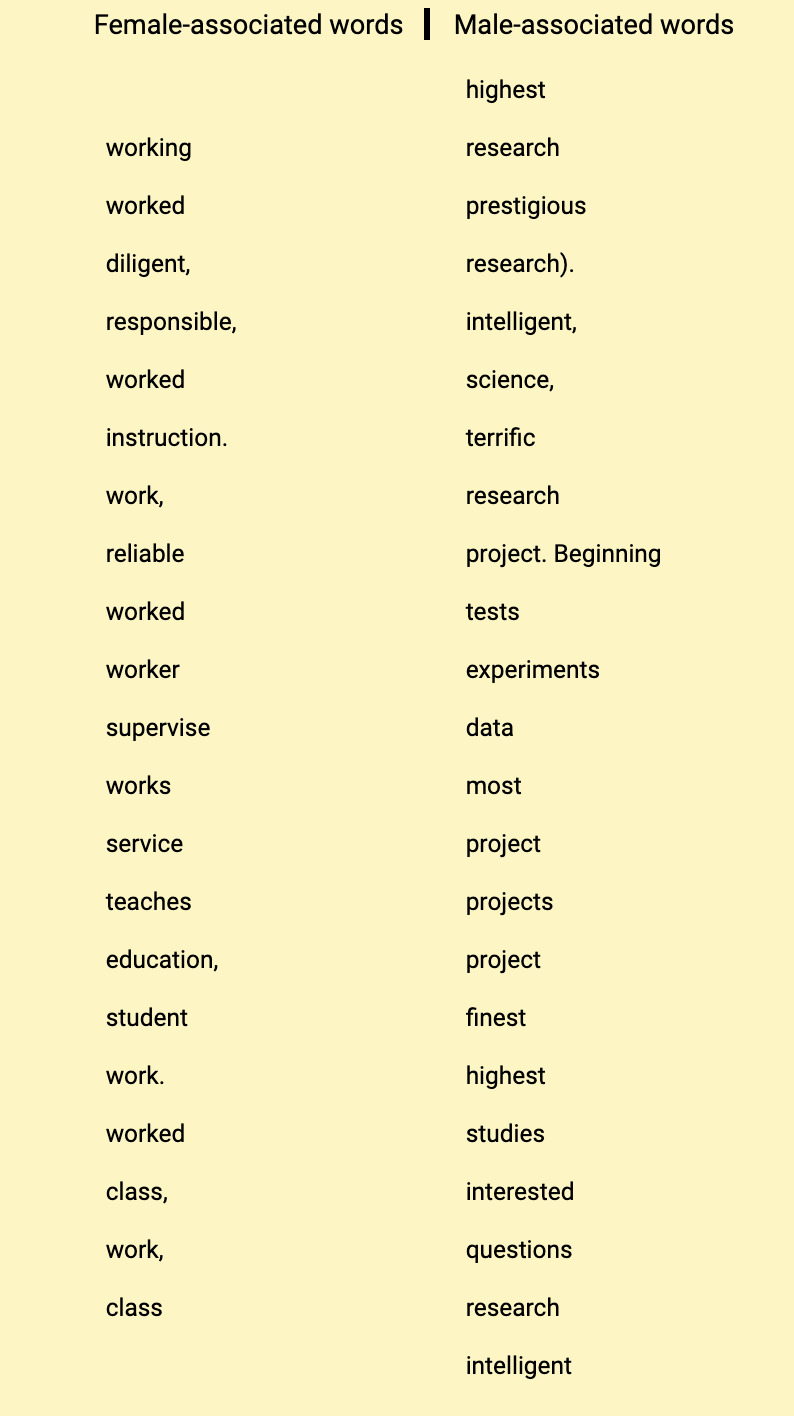 Here you can see the kind of words associated with female letters of recommendation (left column), emphasizing diligence and reliability. On the right are the words associated with letters for male applicants, and they’re about smarts and curiosity and high ranking. This bespeaks sexism, as far as I’m concerned. But I was happy to see that in this letter, for a women, I had roughly equal numbers in each column, with slightly more of the male words. (They don’t say whether letters with more female-associated words reduce the applicant’s chance of getting the position.)

And here’s from a letter in which I recommended a female technician for medical school (again an acceptance); most of the words are male-associated.

Again, what is the recommendation? Is this what you want for a letter for a female, or should I have added some more words about diligence which, after all, is an important characteristic for a future doctor? I don’t know, but she’s now an excellent doctor as well.

The second caveat is this: What are you supposed to do if the letter is imbalanced? For example, in the above letter, should I have cut out some of the female-associated words? (It turns out that the undergrad did get into medical school and is now a fine oncologist.) Are you supposed to ensure that the male-associated words are the predominant ones for either sex?  They don’t tell you.

That leads to the third issue: what if you’re writing for a male whose prime virtues are diligence, reliability, and responsibility. There are some science jobs, like a technician, where some of the most important qualities are showing up, following orders properly, and doing the job diligently and well. Initiative is desirable, too, but that’s a bonus. In fact, one of my colleagues wrote a letter for a guy applying for a technician position, ran the letter through the calculator, and found out that it was imbalanced in favor of female-associated words. (This was after the fact, just like my letter.) What was my colleagues supposed to do: insert more “male associated” words? At any rate, this guy got the job, turned out to be a great technician, and improved in the “male associated” traits.

The main issue is this: what are we supposed to do about “balance” in such a letter? Is imbalance bad? Are “male-associated” words good? That’s the implication. But here we have a woman applicant with male-associated words.

I realize that these lists are based on data, and that one has to be cognizant of how adjectives are perceived with respect to sex. But I think there are some problems with this method that weren’t explicated.

If you write letters of recommendation yourself, you may try running one of them through the calculator, and letting us know how the result came out (the letters of course should not be shown).

32 thoughts on “Are your letters of recommendation gender-biased?”