As I wrote this morning in the Hili dialogue, and as Carl Zimmer describes in the NYT article below (click on screenshot), a team of scientists and entrepreneurs has formed a company called Colossal that aims to “bring back the woolly mammoth.” They raised fifteen million dollars in funding to do this job (cf. P. T. Barnum). The motivating force for this endeavor is well-known Harvard geneticist George Church, who for years has said that a “resurrected” woolly mammoth, constructed using DNA sequence from mammoths frozen in the permafrost, was right around the corner.

Well, the corner hasn’t been turned, and, if I don’t miss my guess, it won’t be.  This project is fraught with so many problems that the likelihood of producing a woolly mammoth is close to zero.

In fact it IS zero, because they’re not going to resurrect that extinct creature. What they are doing is making a genetically modified Asian elephant by inserting into its genome a maximum of sixty mammoth genes that they think differentiate the modern species from the extinct one: genes that involve hairiness, cold tolerance, amount of fat, and so on. What they’d get would be a genetic chimera, an almost entirely Asian elephant but one that is hairier, chunkier, and more tolerant of cold. That is NOT a woolly mammoth, nor would it behave like a woolly mammoth, for they’re not inserting behavior genes. 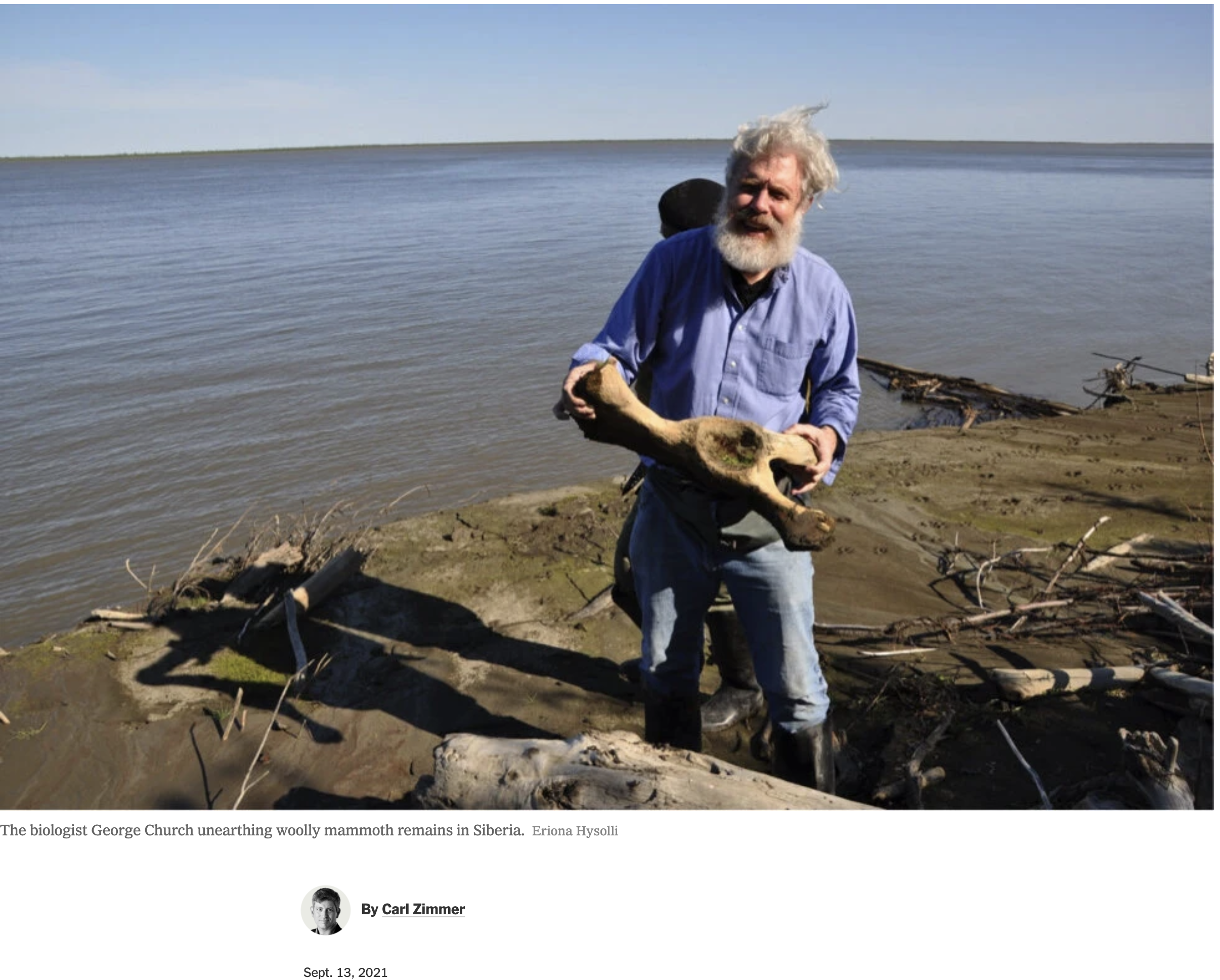 Further, a lot of other genes differ between a mammoth and an Asian elephant. What guarantee is there that the inserted mammoth genes would be expressed correctly, or even work at all in concert with the Asian elephant developmental system?

But it gets worse. Since you can’t implant a transgenic embryo into an elephant mom (we don’t know how to do that, and we would get just one or two chances), Church had this bright idea:

Initially, Dr. Church envisioned implanting embryos into surrogate female elephants. But he eventually soured on the idea. Even if he could figure out in vitro fertilization for elephants — which no one has done before — building a herd would be impractical, since he would need so many surrogates.

Instead, Dr. Church decided to make an artificial mammoth uterus lined with uterine tissue grown from stem cells. “I’m not making a bold prediction this is going to be easy,” he said. “But everything up to this point has been relatively easy. Every tissue we’ve gone after, we’ve been able to get a recipe for.”

An artificial mammoth uterus? Seriously? If you think that’s gonna work, I have some land in Florida I’d like to sell you. Of course, if you’re going to breed these things, you’d have to make two of them of opposite sexes. Could they even do that?

And beside this, there are all the ethical questions about releasing a large number of chimeric elephants into Siberia. That, itself, is unethical; Lord knows what they’d do to the ecosystem (my view is that, if they even succeeded in creating these things, they’d die off within a generation or so). From the article:

Is it humane to produce an animal whose biology we know so little about? Who gets to decide whether they can be set loose, potentially to change the ecosystems of tundras in profound ways?

“There’s tons of trouble everyone is going to encounter along the way,” said Beth Shapiro, a paleogeneticist at the University of California Santa Cruz and the author of “How to Clone a Mammoth.”

. . . .Heather Browning, a philosopher at the London School of Economics, said that whatever benefits mammoths might have to the tundra will need to be weighed against the possible suffering that they might experience in being brought into existence by scientists.

“You don’t have a mother for a species that — if they are anything like elephants — has extraordinarily strong mother-infant bonds that last for a very long time,” she said. “Once there is a little mammoth or two on the ground, who is making sure that they’re being looked after?”

My opinion of this project is expressed more tersely by geneticist and author Adam Rutherford:

This is a mammoth turd https://t.co/UwhGhH4hab

And he goes on to explain why.

But let’s get the take of a real expert on mammoths, Victoria “Tori” Herridge, a paleontologist and writer at London’s Natural History Museum who’s written extensively about this project. Her opinion is pretty much the same as mine and Rutherford’s.  Here’s the first tweet of a long thread in which, while expressing admiration for George Church, she simply takes the project apart. I’d recommend you go through what she says if you have interest in this project.

News has broken that a new biotech company, Colossal, has been founded with the aim of creating an gene-edited Asian elephant that is tolerant to Arctic conditions.

And so, a personal thread of discovery and opinion

Moreover, now, as opposed to the artificial mammoth uterus idea, the company says they will implant the egg (derived perhaps from a stem cell, something that has been done only with mice so far) into an AFRICAN ELEPHANT. Most zoos don’t keep that species because it’s big and dangerous, as well as endangered.

CORRECTION — should have done my fact checks! Colossal says it will use **African** elephants at the surrogacy stage.https://t.co/2ccbSJW1C5 pic.twitter.com/kn7NGD7T97

34 thoughts on “A mammoth debacle”