(Note: this report comes from a right-wing college-monitoring site and I haven’t been able to verify it.  However, I don’t have reason to doubt it, either. Should I give similar caveats—from the opposite political direction—when citing PBS, the New York Times, and so on?)

This is what the madness on campus has come to: Crystal Duncan Lane, an “instructional faculty member” at Virginia Tech’s Department of Human Development and Family science, apparently handed out her syllabus for a course (I can’t find the exact course, but a student says it was “about disabilities” and the major lists “An Introduction to Disability Studies“, which must be the one).  At any rate, Campus Reform, which has carried many reports that I independently gave on this site, says that Lane’s syllabus included this introduction to the instructor:

I am a Caucasian cisgender female and first-generation college student from Appalachia who is of Scottish, British, and Norwegian heritage. I am married to a cisgender male, and we are middle class. While I did not ‘ask’ for the many privileges in my life: I have benefitted from them and will continue to benefit from them whether I like it or not. This is injustice. I am and will continue to work on a daily basis to be antiracist and confront the innate racism within myself that is the reality and history of white people. I want to be better: Every day. I will transform: Every day. This work terrifies me: Every day. I invite my white students to join me on this journey. And to my students of color: I apologize for the inexcusable horrors within our shared history.

Given that this is a course on disabilities, it’s odd that she doesn’t mention that she’s also privileged by not being disabled (assuming she’s able bodied). But the most disturbing part is the implication that all white people are innately racist. This could have been written by the team of Kendi and DiAngelo.

The worst part is that education is supposed to teach people about things and about how to think and criticize, not propagandize them as Lane has done in her “introduction”. She tells them that she (and all the white students) are participating in a massive “injustice” right now. And really, is it a matter of student interest that she tells them that every day, in every way, she’ll get better and better? This is what the kids call “TMI“.

Yes, we have the written equivalent of a penitente, those Catholics who go around scourging their backs with whips until the blood streams down, all to imitate the Biblical trials of Jesus and to punish themselves for being sinners.

In the article, two students (one gives her name) beef about this statement, one saying this: “It hurts that someone says I was born with ‘innate racism’ because of my skin color. [It] makes me feel like I should hide and worry about everything I say.”

And well she should. The chilling of speech by colleges and professors setting forth what statements are ideologically acceptable on campus and in class severely diminishes the value of education. And we already know it’s widespread. Inside Higher Ed reports the results of a survey from September of last year and gives a disturbing graph:

Sixty percent of students have at one point felt they couldn’t express an opinion on campus because they feared how other students, professors or college administrators would respond, according to a survey report published Tuesday by the Foundation for Individual Rights in Education, or FIRE, a campus civil liberties watchdog group, and RealClearEducation, an online news service. The survey of 19,969 undergraduate students from 55 colleges and universities was administered from April to May by College Pulse, a research company.

Note below that all comfort levels are below 25%.  It’s instructors like Crystal Duncan Lane that create a climate like this. 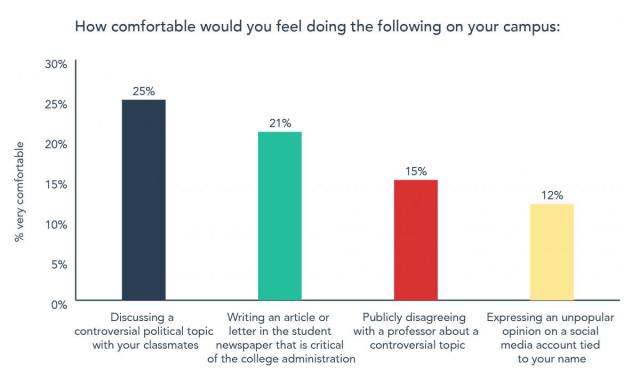