We have a decent backlog of photos now thanks to kind readers, but they continue to diminish at the rate of one batch per day, so please send yours in. Thanks.

Today we have regular Doug Hayes, who takes some lovely photos of the visitors to his bird feeders for his “Breakfast Crew” series. Doug’s captions are indented, and you can enlarge his photos by clicking on them.

Here is the 16th installment of the Breakfast Crew from Richmond, Virginia. The yard has been busy as usual, with a slightly different lineup. Last year, we were mobbed with starlings. This year, the cardinals have taken over with a big population explosion. It is not unusual to see as many as ten at the feeders or on the ground scavenging at one time. The females seem to get along pretty well, but the males spend much of their time chasing each other away from the food – and the females!

A juvenile American robin (Turdus migratorius) hanging out on the chicken wire enclosure we built around our tomato plants to protect them from squirrels (the little tree rats don’t eat the tomatoes, but will take a bite out of them just to assure themselves that they don’t like tomatoes). 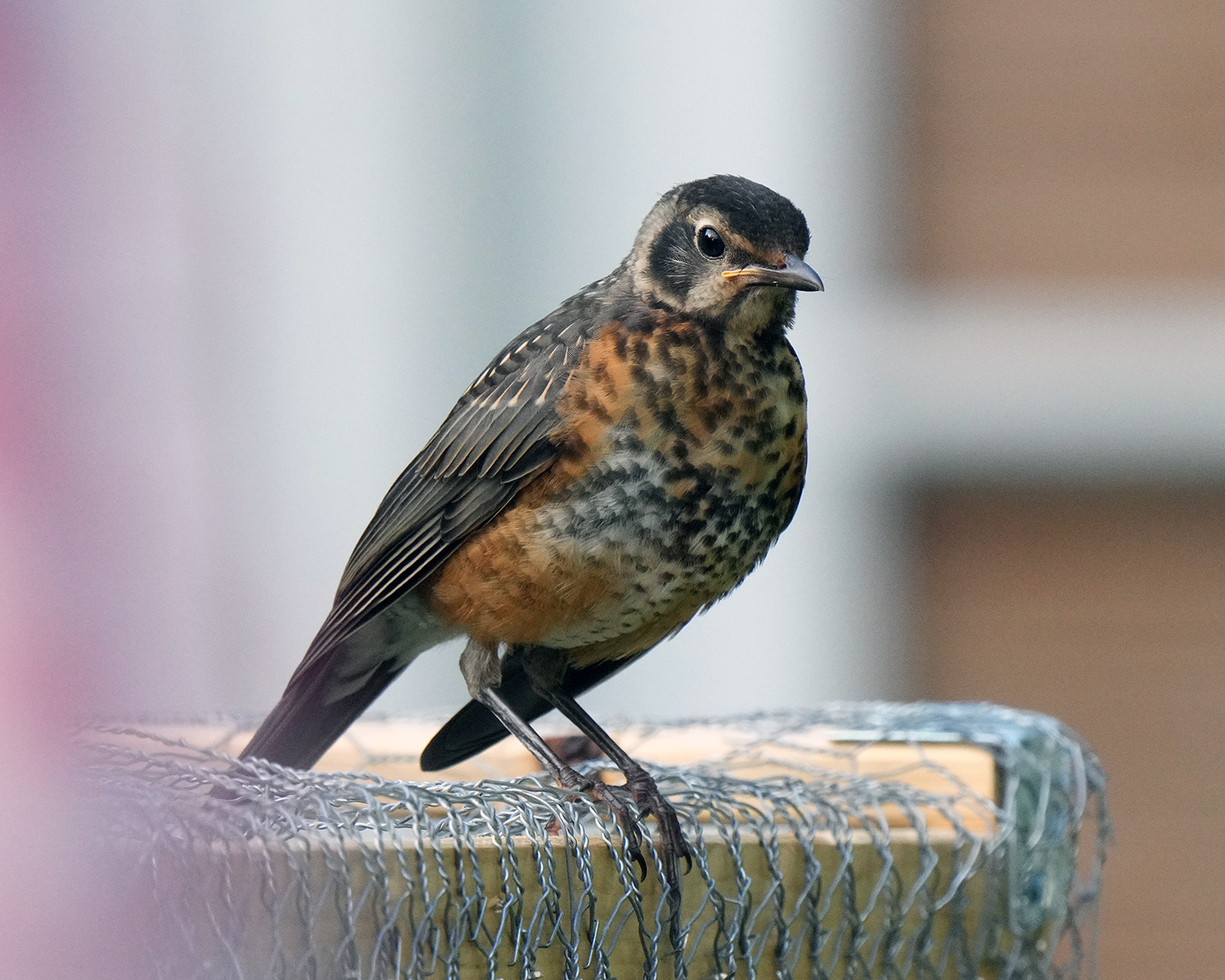 A male house finch (Haemorhous mexicanus) surveying the yard from the pomegranate tree that overlooks the feeders. These guys are as numerous as the cardinals. I haven’t seen any purple finches yet. They got hit pretty hard last year by Mycoplasmal conjunctivitis, an eye disease that can cause blindness. The house finches seem to have weathered the storm OK. 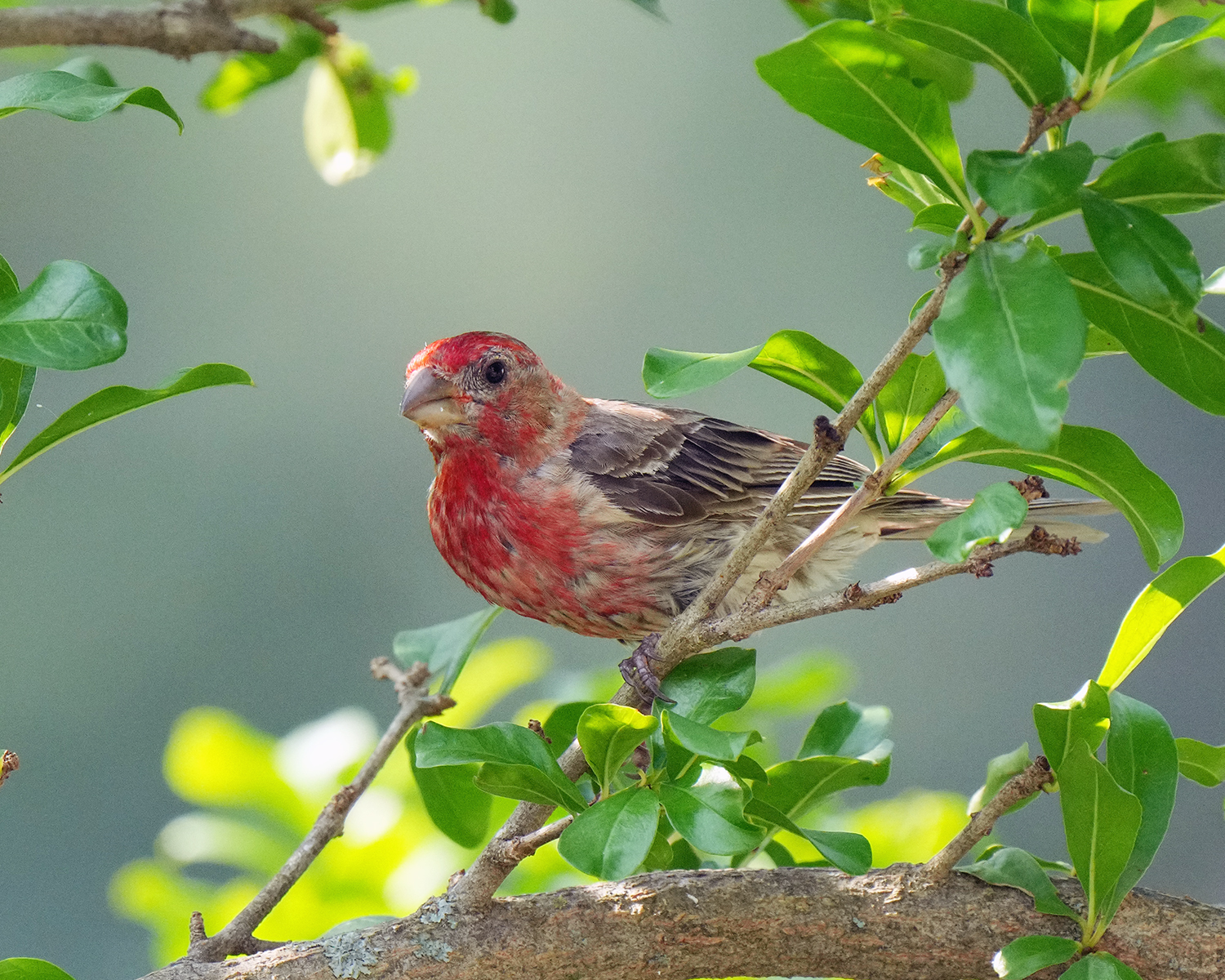 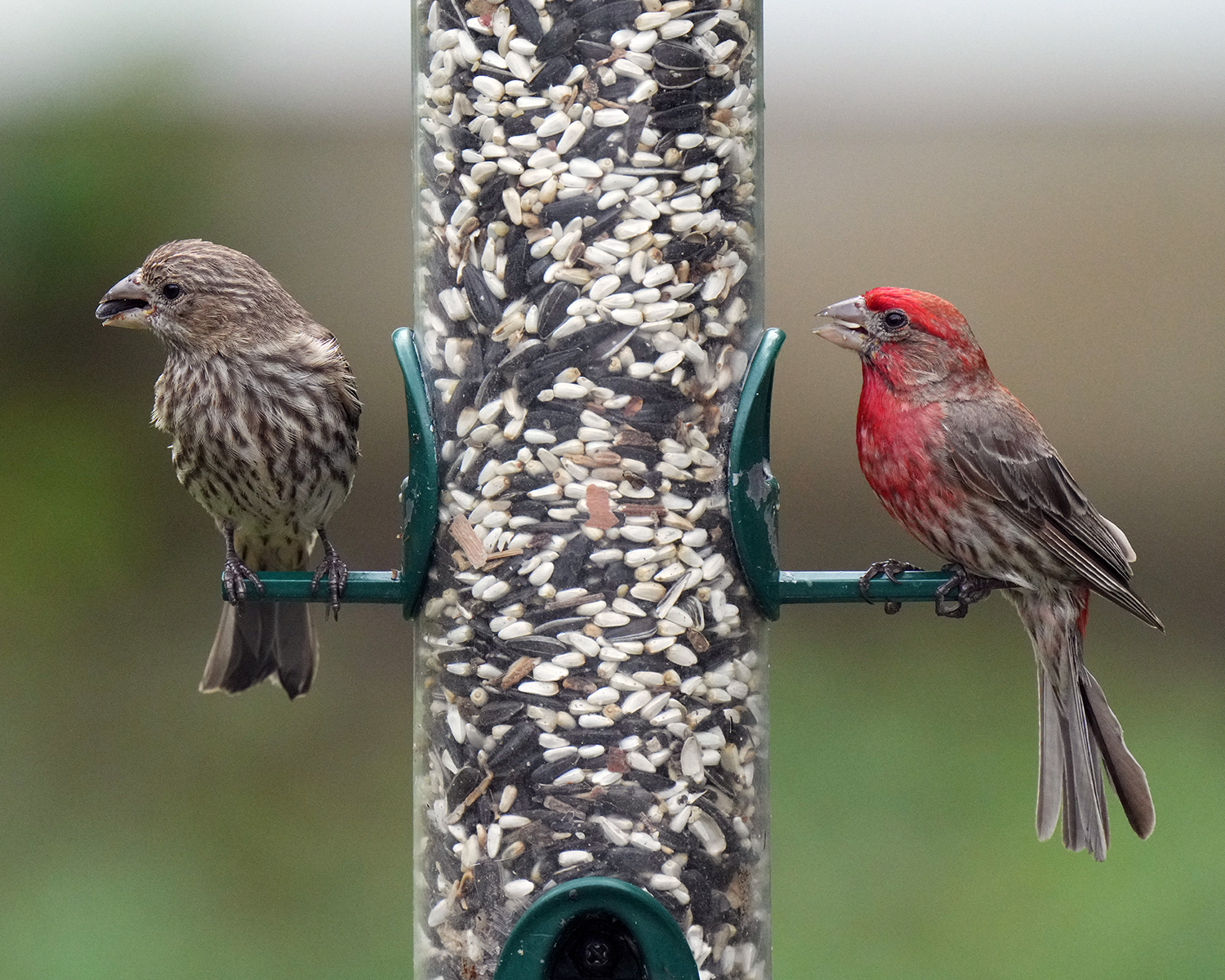 A Carolina chickadee (Poecile carolinensis) snags a tasty seed. Usually, the chickadees will grab a bit of food and fly away immediately. If things are quiet, they will place a seed between their feet while perching on the feeder and peck away the hull to get at the kernel inside. 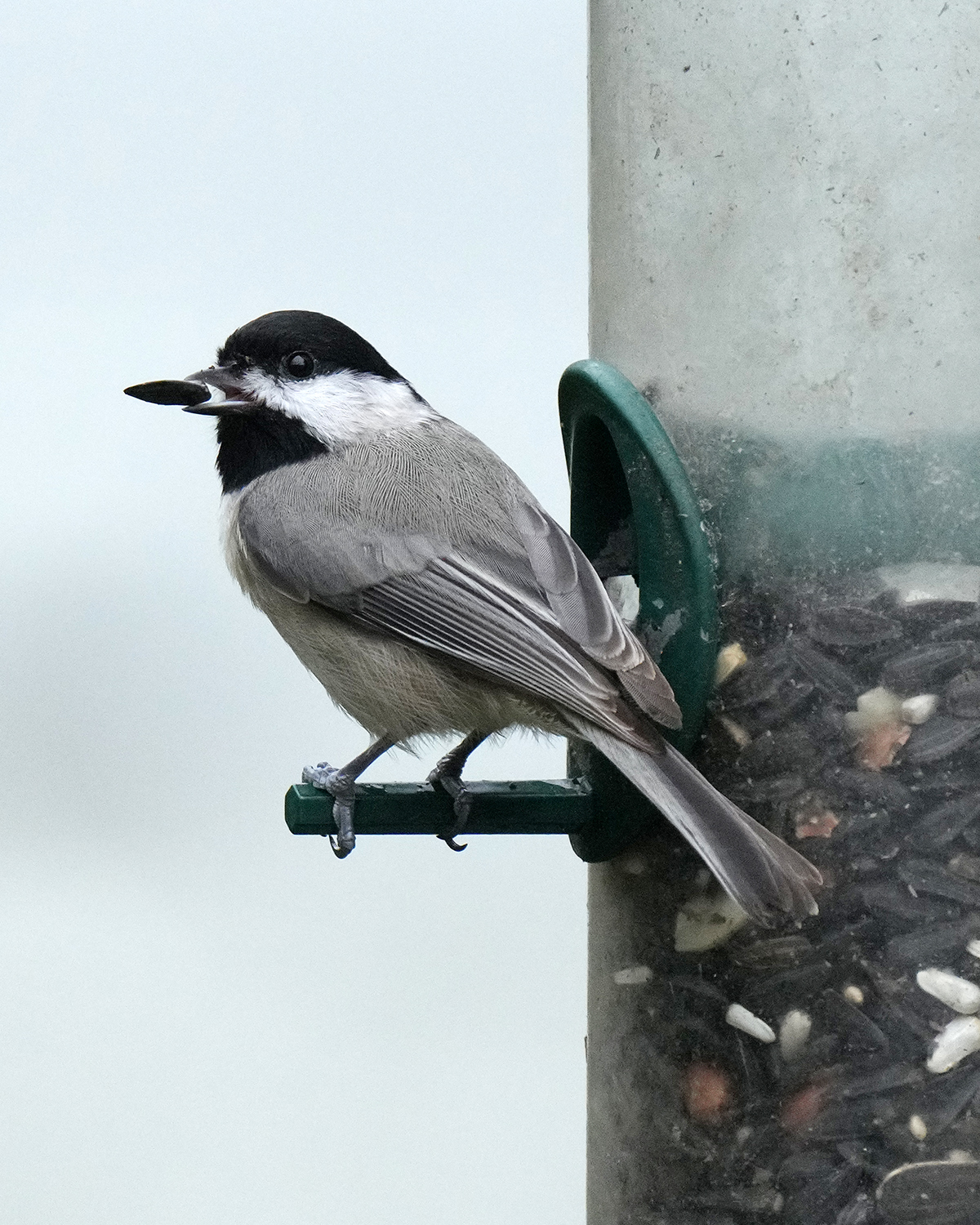 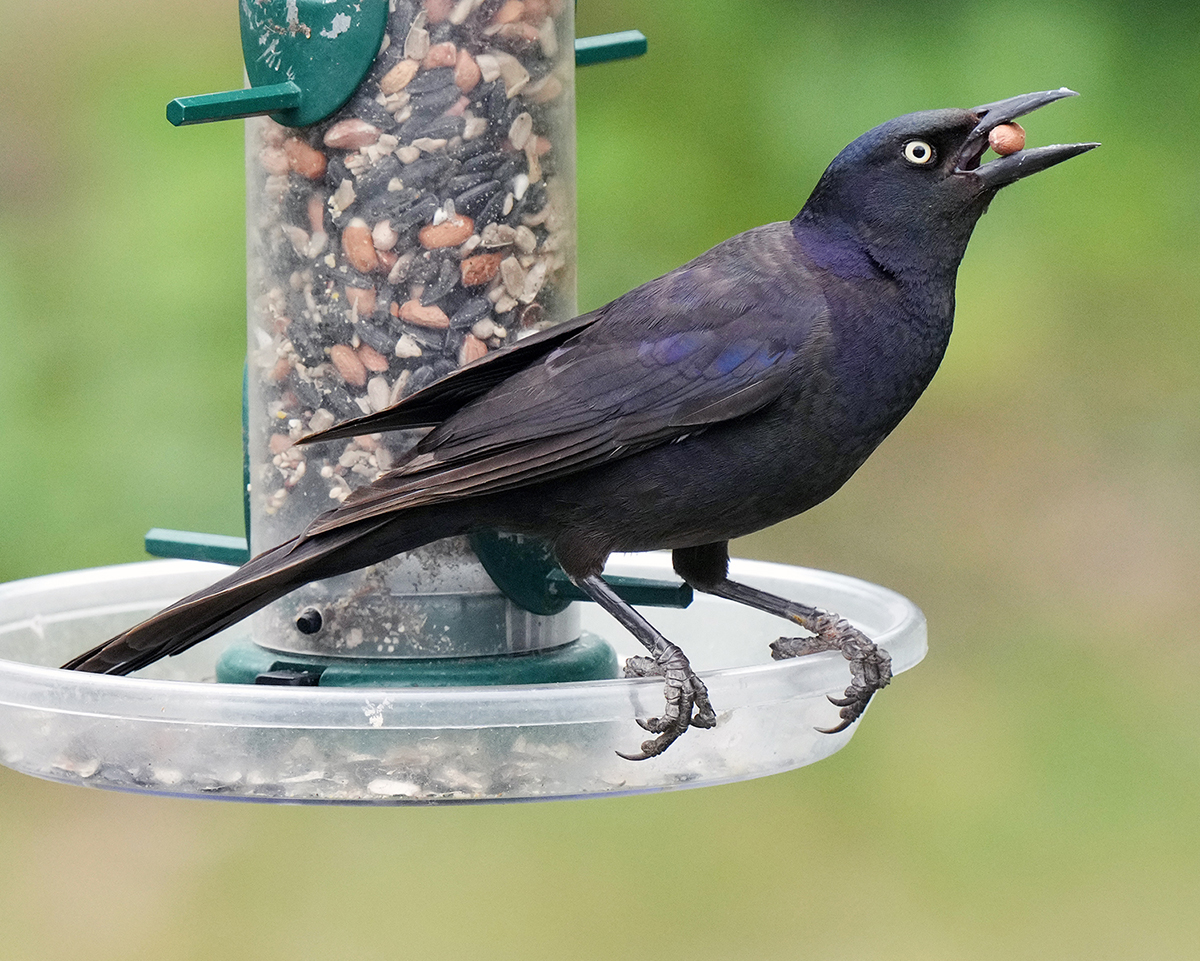 It takes more than pouring rain to keep this Northern cardinal (Cardinalis cardinalis) away from the feeders. 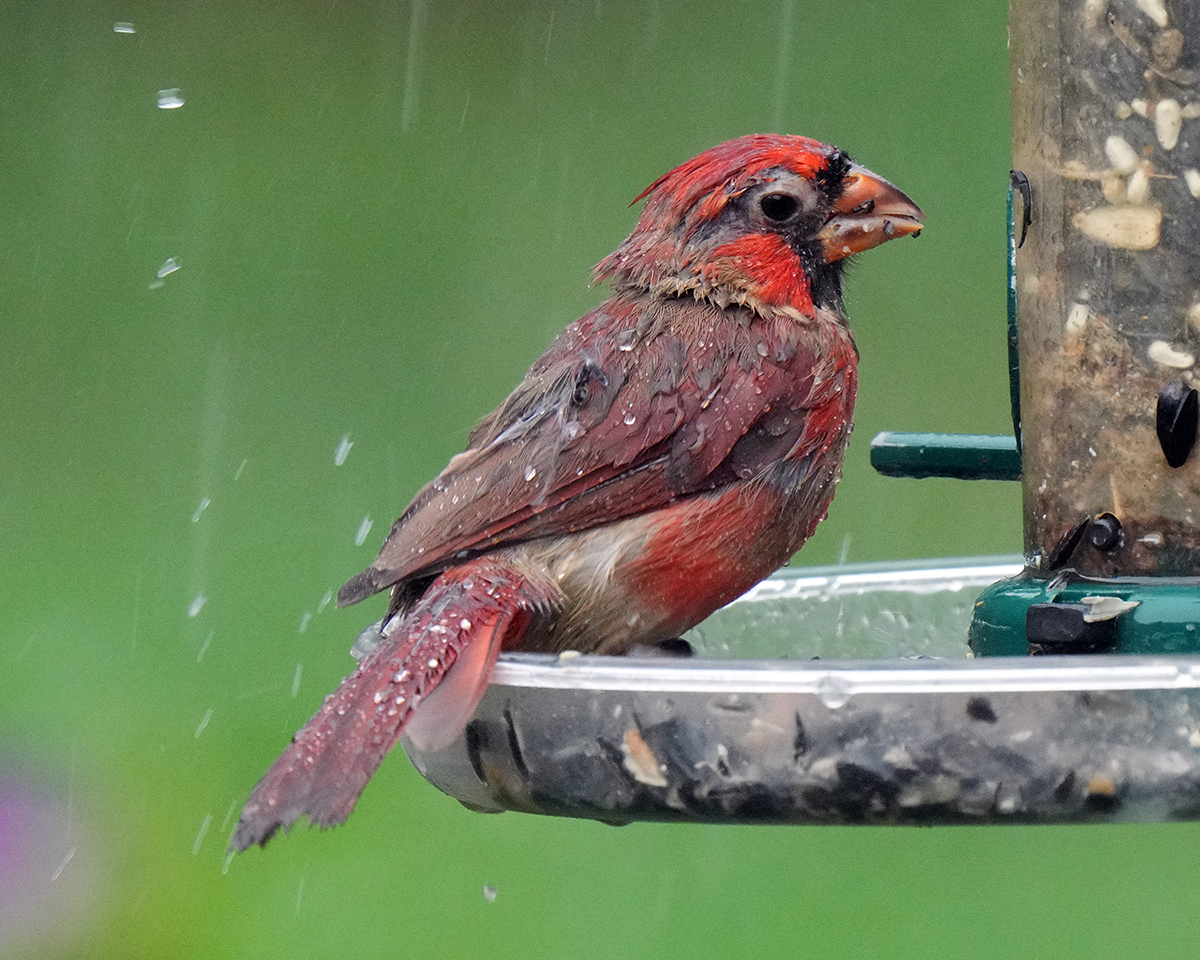 A young Brown thrasher (Toxostoma rufum) hanging out on the tomato plant enclosure. Usually, the thrashers keep to the bushes surrounding the yard, but will go for the suet feeders when I place them out. 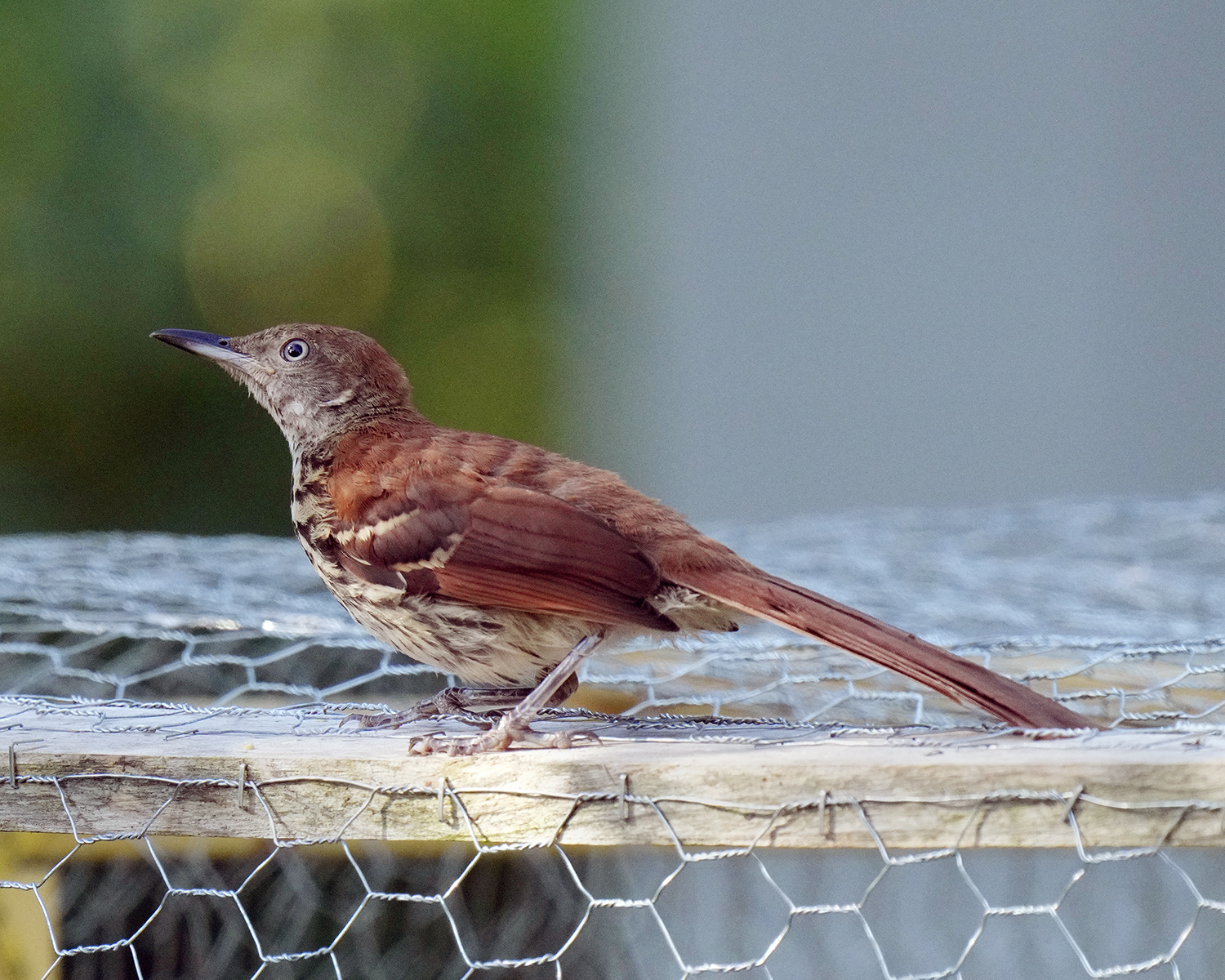 A pair of Mourning doves (Zenaida macroura) just chilling. Like their cousins the pigeons, they don’t seem to be the brightest birds. I frequently see them just sitting out in the open after they have eaten their fill, totally unconcerned about the hawks that patrol the neighborhood. 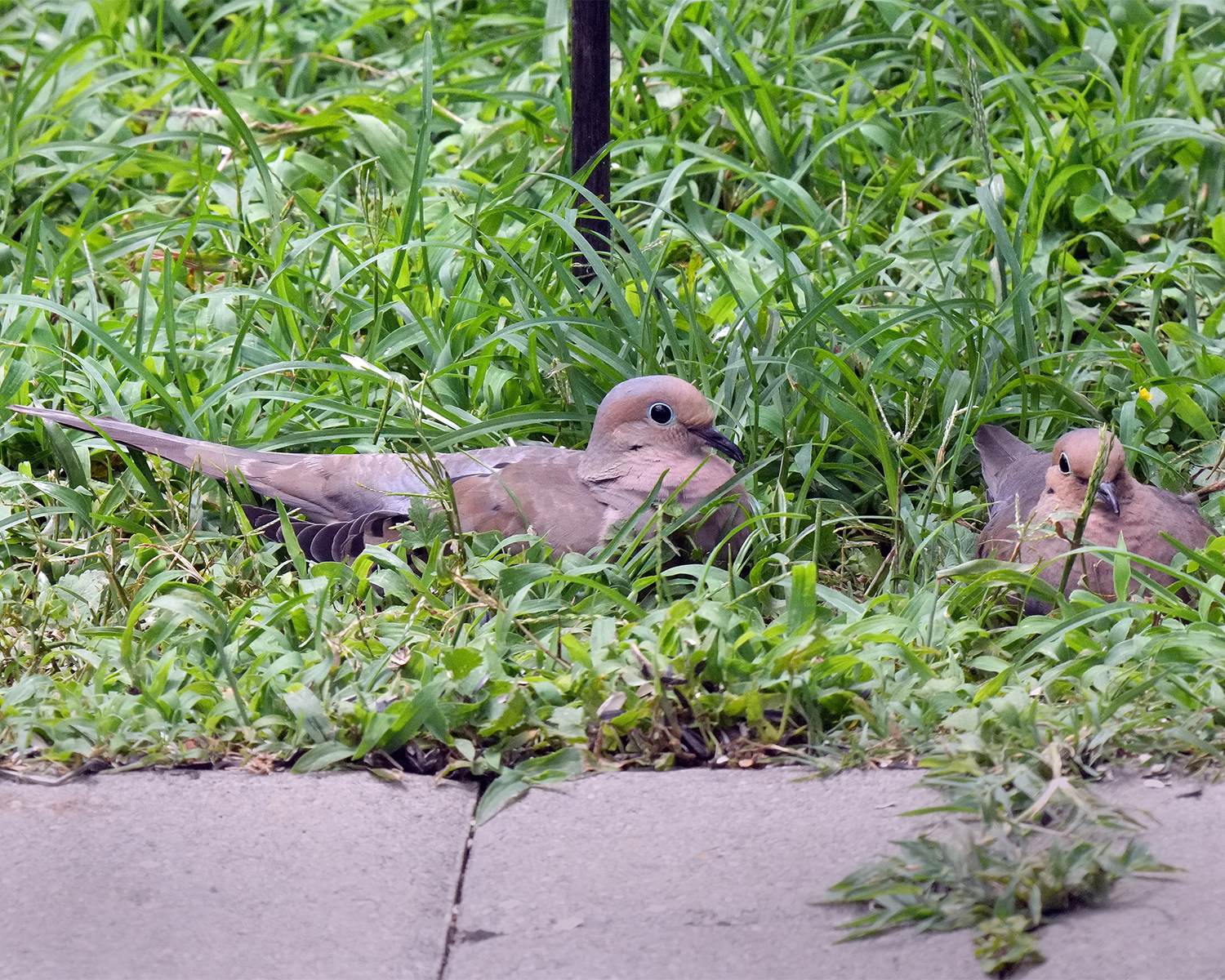 This male Ruby-throated hummingbird (Archilochus colubris) is king of the feeder. After feeding, he will perch a few feet away from the feeder and drive off any other hummingbirds that approach his territory and food source. He will even go after larger birds that get too close. 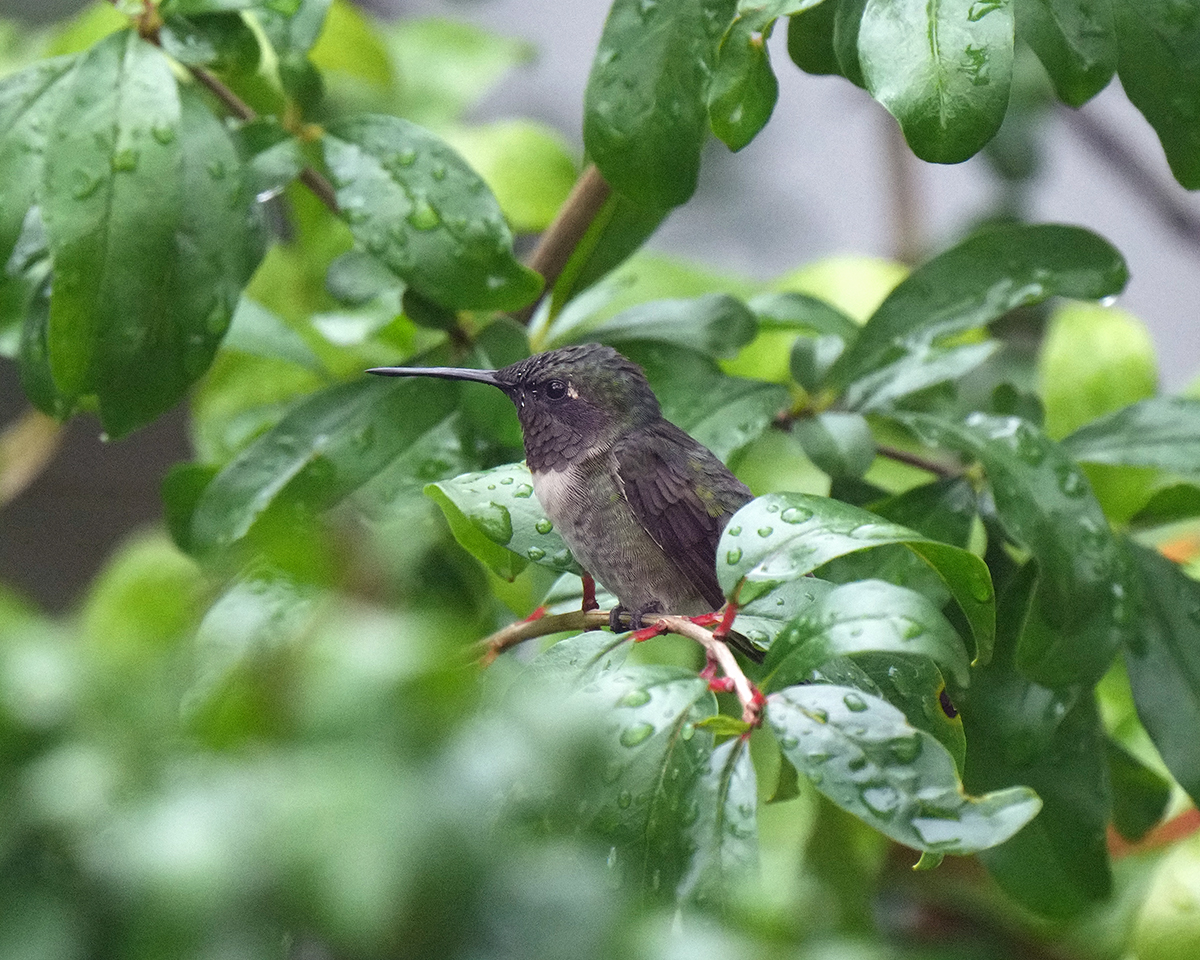 Good morning!  This cardinal (Cardinalis cardinalis) seems to greet the day with a smile. 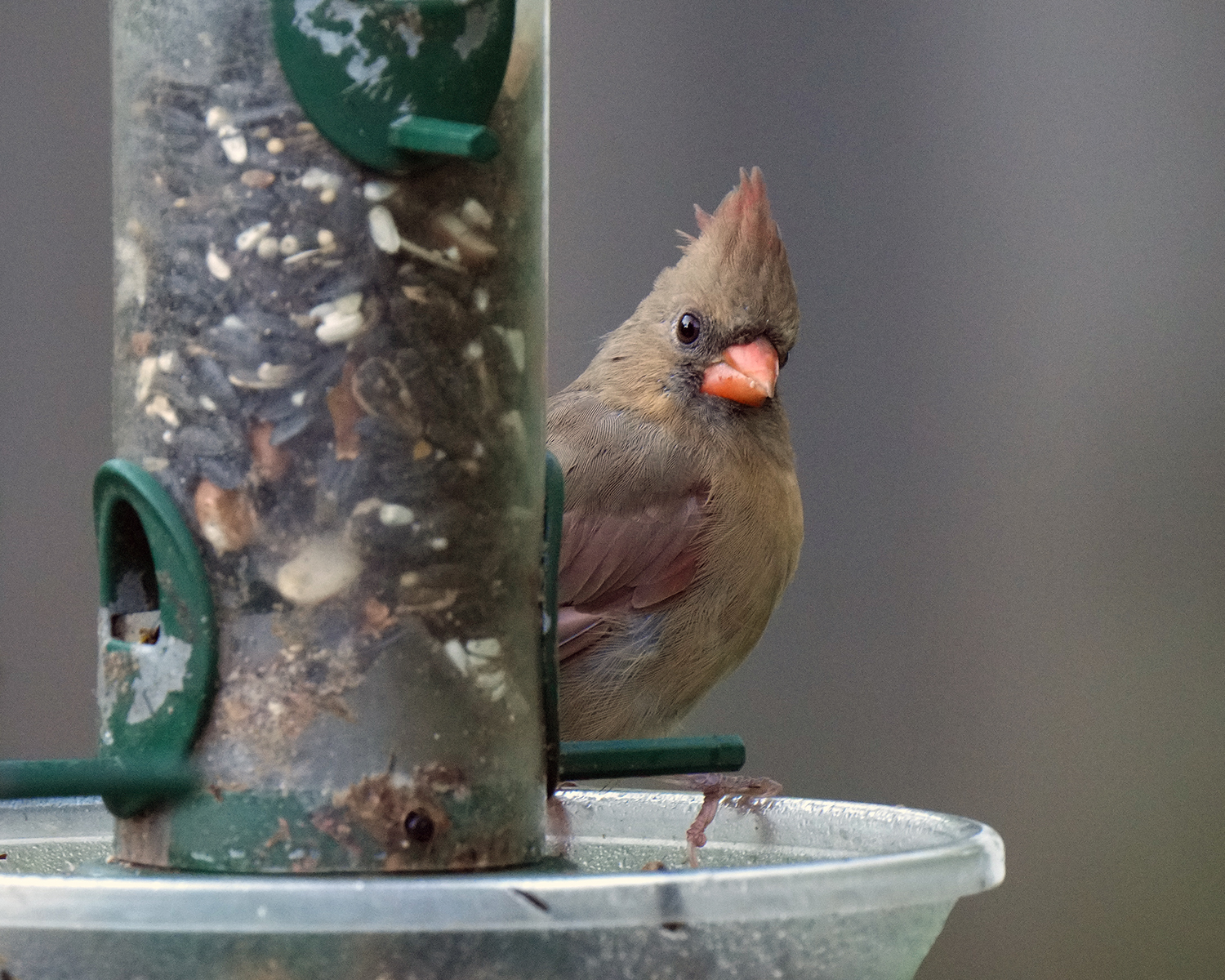 Baldy, a male cardinal (Cardinalis cardinalis) is a regular to the feeders. His head has been bare all summer, but now it seems as if he is sprouting some new feathers. There is a big debate among birders if this loss of feathers is part of the molting process or some kind of parasite infestation. I have seen this in cardinals, grackles, wrens and thrashers, sometimes with patches of feathers missing from other parts of the birds’ bodies. None of them seem to be ill or discomforted by it. 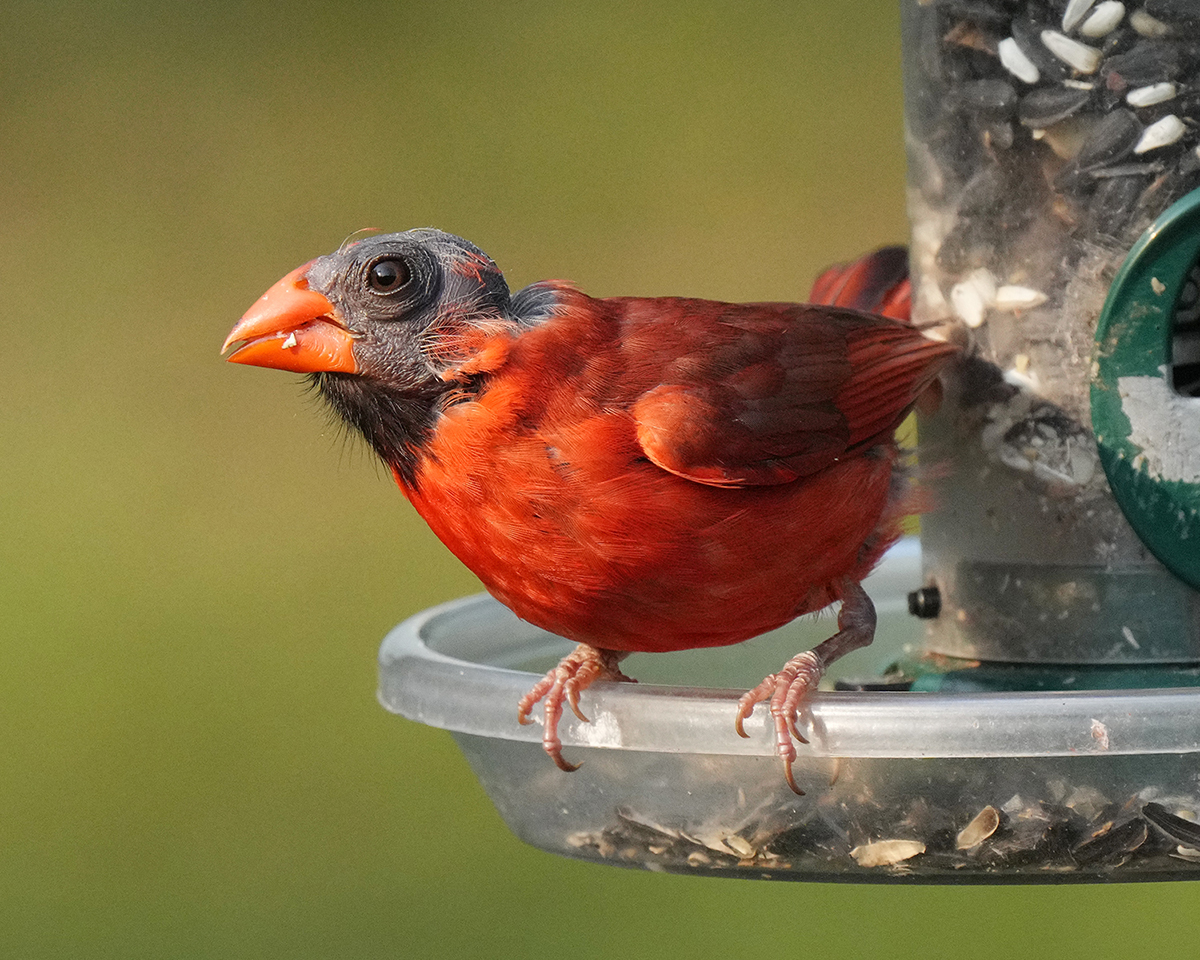 Everybody loves peanuts! This Carolina wren (Thryothorus ludovicianus) seems to have snagged a bit more than it could chew. It flew off with its prize to work on it in private. 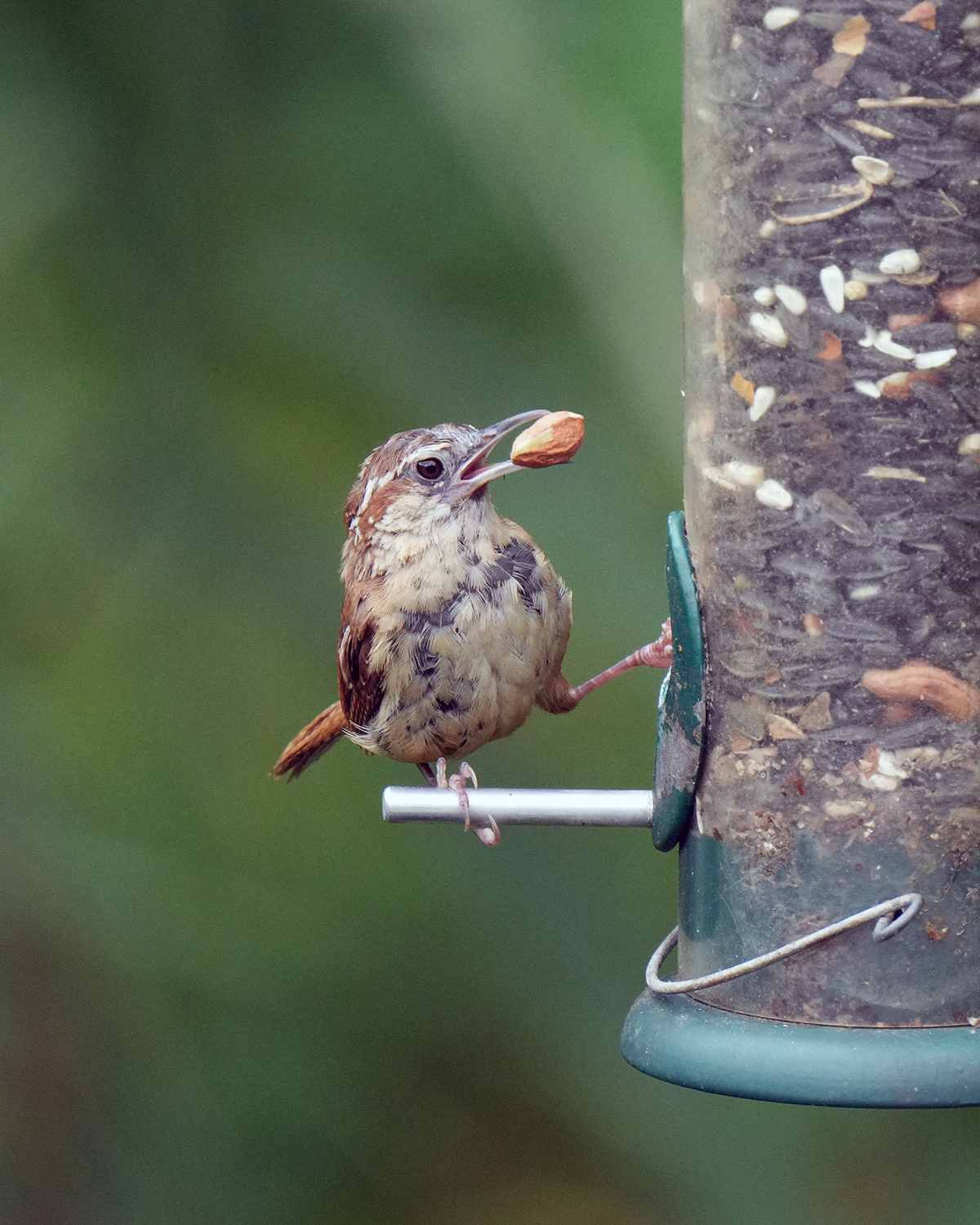 A Tufted titmouse (Baeolophus bicolor). Another shy feeder. These little guys hit the feeder and fly off immediately with the first thing they can grab. It is unusual for them to linger more than a few seconds. 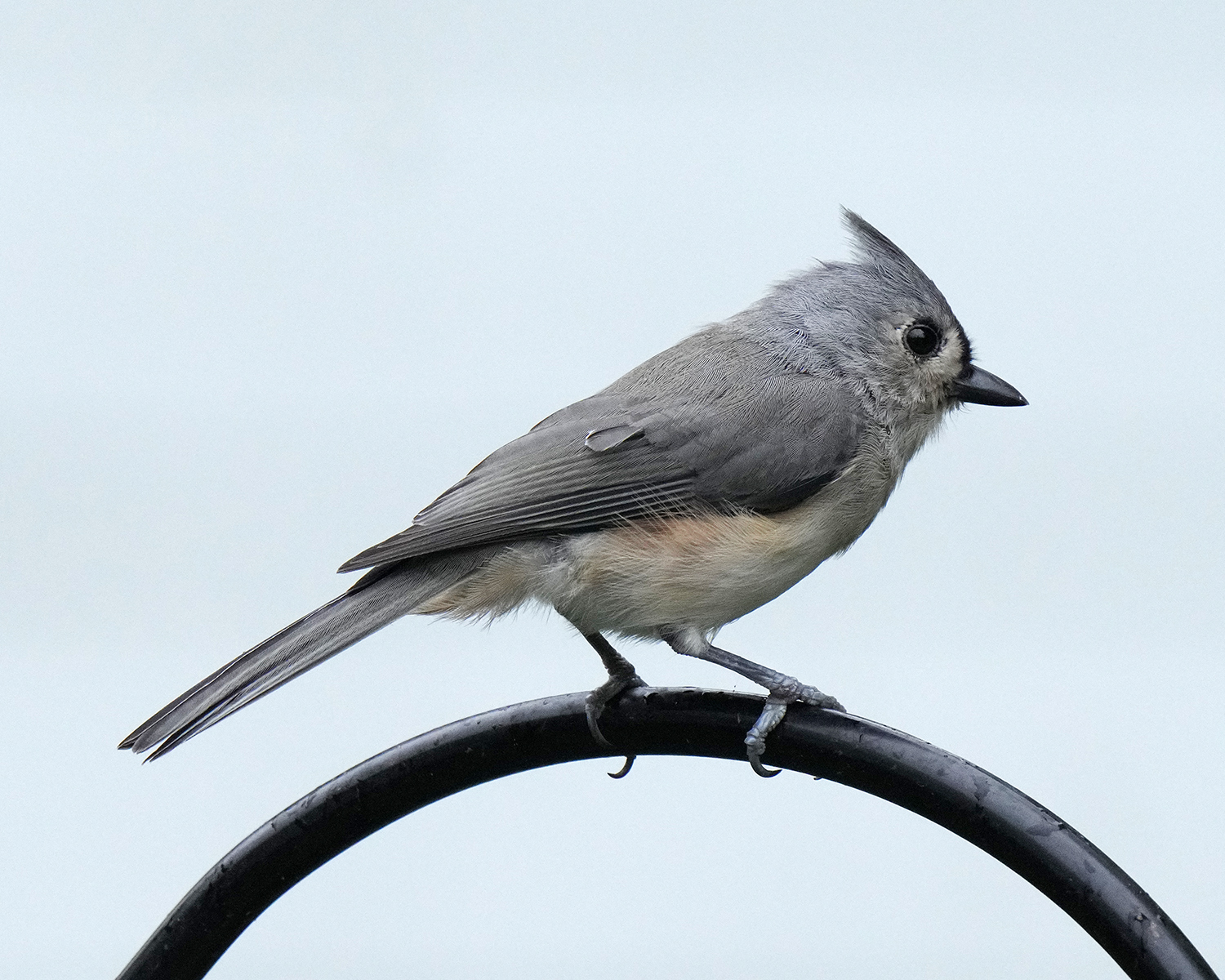 Chip Monk, the Eastern chipmunk (Tamias striatus) returns. I had not seen Chip in over a month, but we had some pretty heavy rain a few days ago and Chip was back. For some reason, rainy weather seems to bring her out into the yard and she will spend much of the day scrounging for seeds in the wet grass and plant beds. 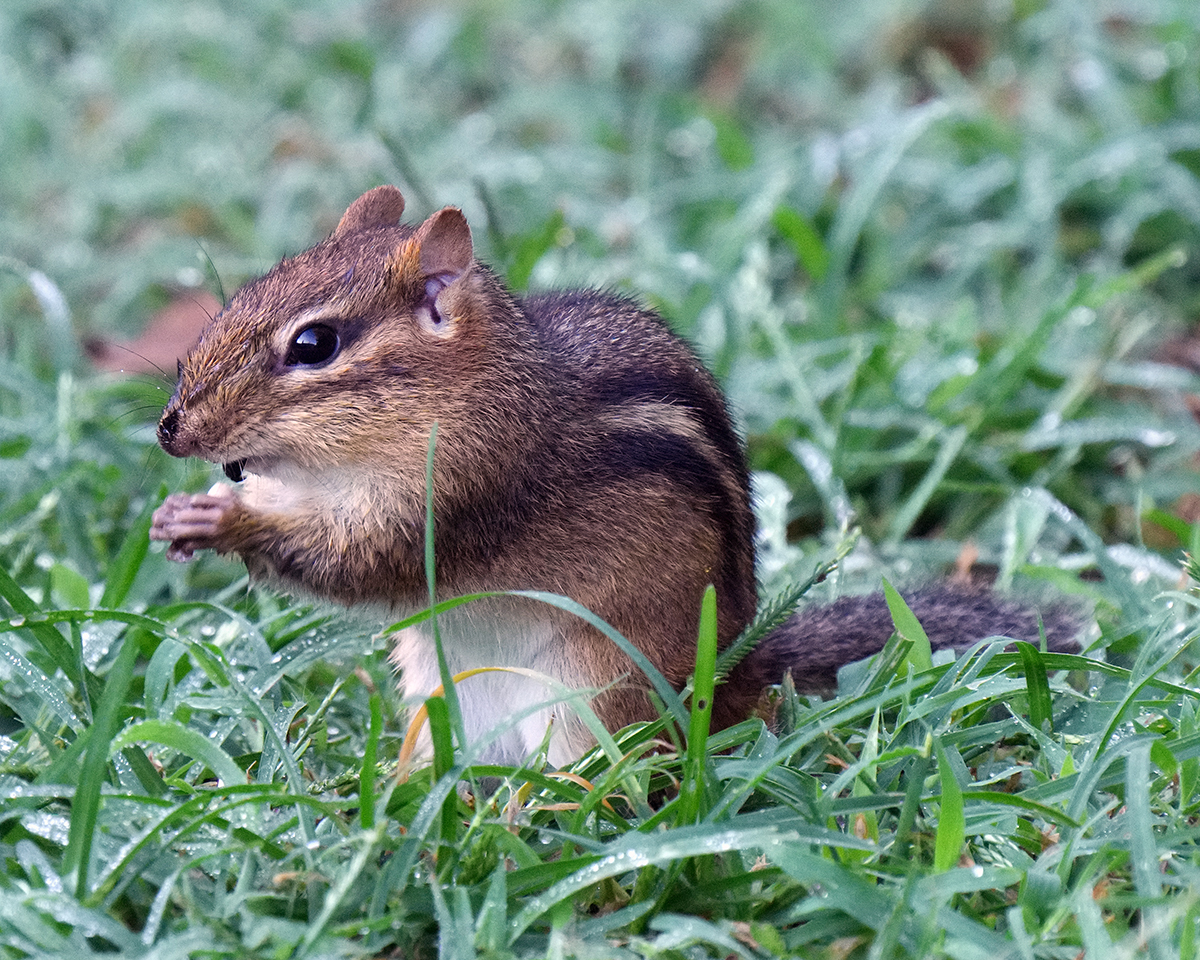