There’s a longish report at the Foundation for Individual Rights in Education (FIRE) that summarizes how scholars have been reported to authorities (“targeted”) for saying or writing “offensive” stuff over the last 6 years. You can read the report by clicking on the screenshot below:

It’s a bit tedious to read in its entirety, but the results are interesting. I’ll skip the definition of scholars and most of the methodology, except to say that the report relied on eight sources (below). These don’t include FIRE’s famous “disinvitation database“, as that reports deplatforming or disruptions of talks of speakers at colleges, not targeting and attempted punishment of individuals at universities. The sources of data:

Trawling of this dataset using the analysts’ methods turned up 456 “targeting incidents” between January 1, 2015 and July 31, 2021, so it’s up to date. A “targeting incident” is one in which a person or people call for sanctions on a scholar for what he or she said or did.

The main results are these (I’ve omitted some of the report’s key findings.

a. Most of the incidents did result in some kind of sanction. 74% of the 456 reports resulted in either an investigation (considered a sanction) or a punishment like suspension or firing. That is very high, especially given that nearly all the incidents involved speech that, if uttered in a public university, would be protected by the First Amendment. (The article gives some examples.)

b. Targeting incidents have risen substantially in the last 6 years. Here’s a plot by year with the incidents in yellow and sanctions in red. There were 24 incidents in 2015, 113 in 2020, and 61 incidents already in the first half of 2021. 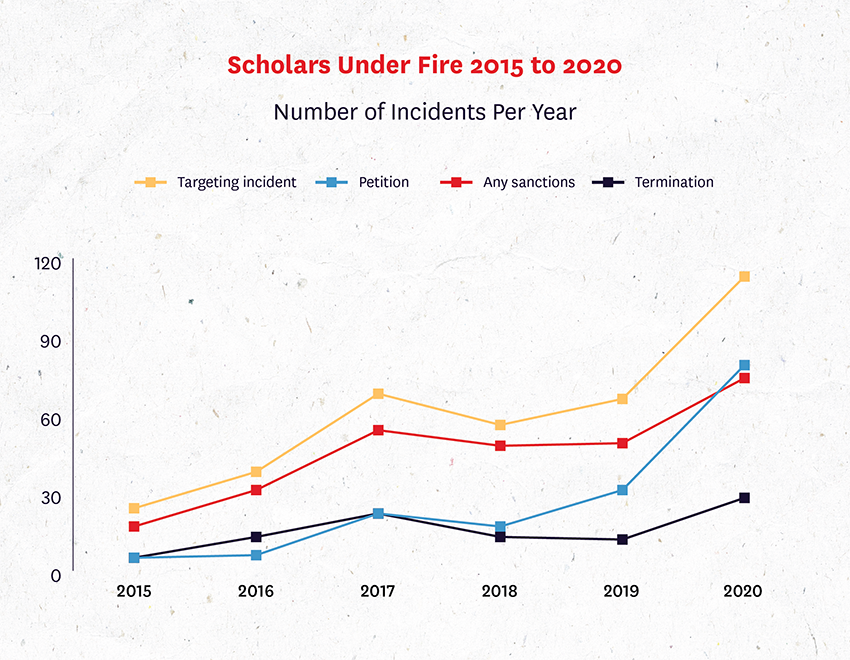 c. When the researchers could determine whether the targeting originated from positions to the Left or Right of the Speaker, it was most often from the Left. (This is what you’d predict from the Disinvitation Database). A graph: 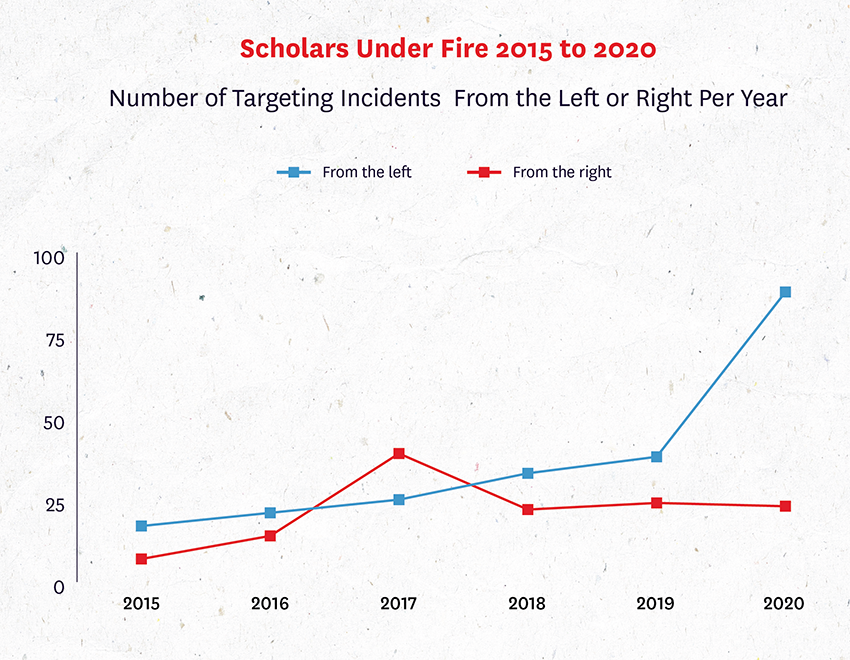 Of course most students are on the Left, but so are most professors. But remember: this is a plot of reports of whether the accusations came not from the Left or Right by themselves, but really “from the Left or Right of the accused.” And, in fact, many of the accused were already on the Left. The reports from the Right did an uptick in 2017, and that may be the result of Donald Trump’s election when the Right felt empowered.

d. The percentage of sanctions is, as I said, high (64%); most of these are investigations, but terminations and suspensions of scholars are quite common.  Here’s a bar chart of the various outcomes when someone is “targeted”: 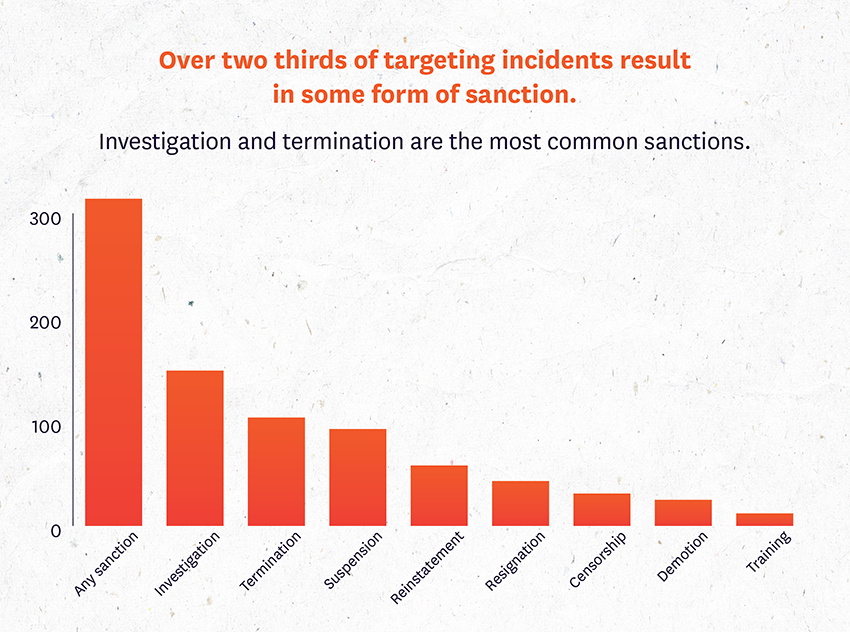 e. When it comes to being targeted, race is by far the issue involved most often, with partisanship, gender, and international policy behind. This again is not surprising, since race has been dominating the national discourse, but particularly on campuses. Here’s a graph: 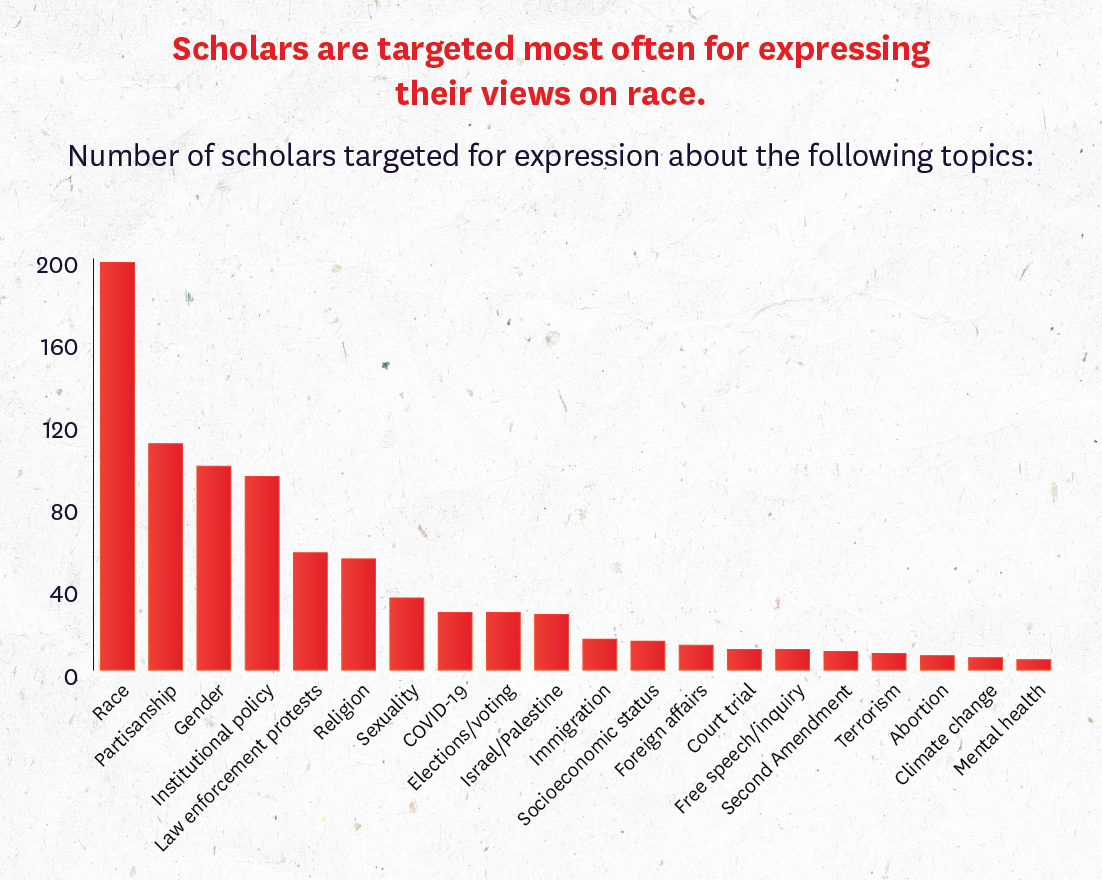 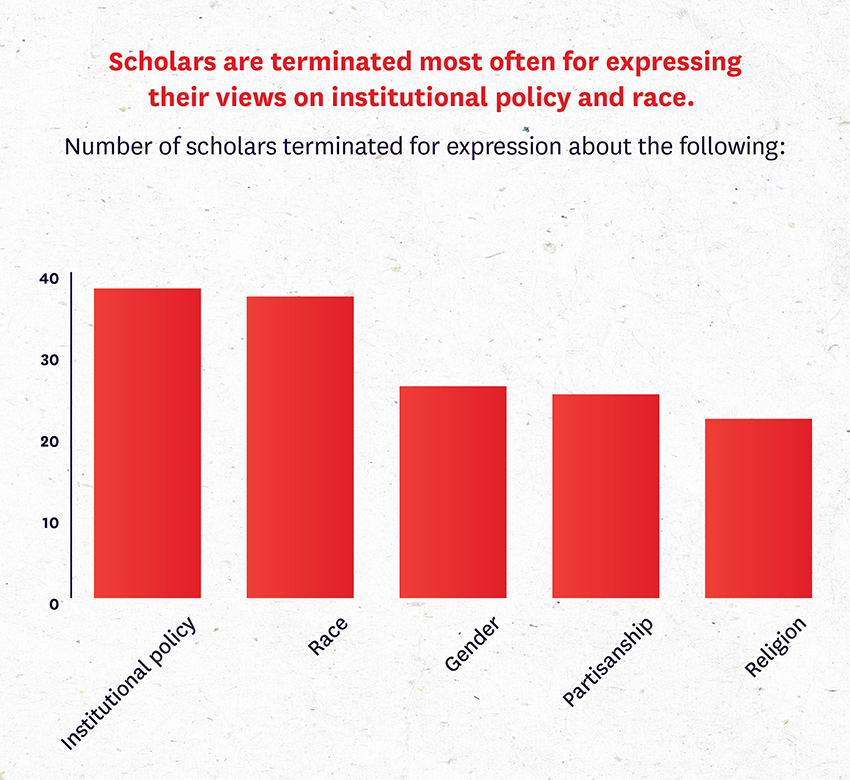 g. Finally, the sources of the targeting are different depending on whether the attack came from the Left or the Right of the person targeted. The graph below shows the three most frequent sources of attack with “from the left” being the three bars on the left and “from the right” being the three bars on the right. (This is a confusing graph.) The most obvious difference is that attacks from the Left come from students (undergrads especially frequent) and other scholars, while attacks from the Right come from the public, the administration, and politicians.  This is not that surprising given that most scholars are on the Left, while attacks on the right are more likely to come from non-academics. 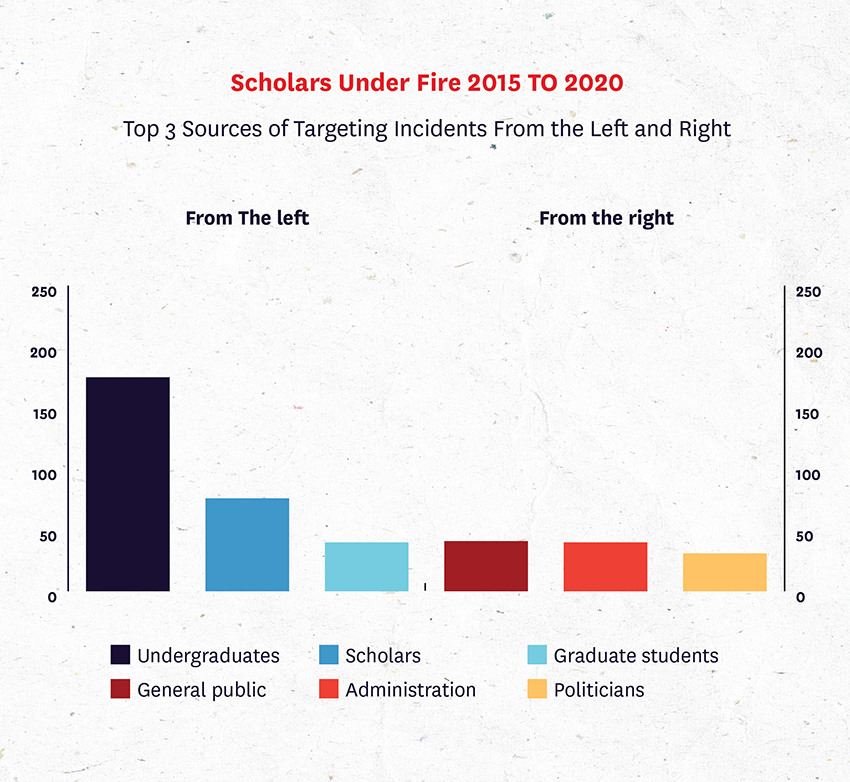 There are several other results that I won’t delve into, but merely mention. The disciplines in which targeting incidents occur most often are those “at the core of a liberal arts curriculum: law, political science, English, history, and philosophy.” That’s again not surprising, as those are the areas in which scholars are most likely to say something offensive. It’s a lot harder to say something offensive when you’re teaching science or math.

Finally, here’s an argument for universities adopting the Chicago Principles of Free Expression:

Campuses where the most targeting incidents have occurred tend to also have severely speech-restrictive policies, and are unlikely to have adopted the Chicago Principles guaranteeing the preeminence of free speech.

An article like this would be dry without a few examples, and it gives three instances of controversial scholars who were targeted: Mike Adams (who ultimately killed himself after being attacked for impure tweets), Gordon Klein (a particularly unfair case), and Columbia University adjunct law professor Elizabeth Lederer, targeted for prosecuting in court the Central Park Five, who were ultimately exonerated for raping and badly injuring a woman. Lederer ultimately had to resign from Columbia.

The lessons from this, given that most of the targeting was by mob vigilantes who wanted someone’s head (i.e., job), and that most of those attacked were exercising free speech, are obvious, but I’ll let FIRE summarize them for you:

. . . If scholars are unable to ask certain questions because they fear social or professional sanctions, particularly from their students and colleagues, then the advancement of human knowledge will be hindered. We may unknowingly continue to pursue important societal goals using ineffective means and policies because scholars fear the consequences of investigating whether such means and policies help us achieve what they are intended to.

Such a state of affairs should worry anyone with a vested interest in American higher education because it undermines academic freedom and open inquiry, threatening academia’s ability to ensure the furtherance of knowledge. One need not agree with a scholar’s research or teaching to nevertheless respect that scholar’s right to research and teach how they see fit. Distinguishing support for one’s speech from one’s right to speech is often lost in today’s culture wars and the “Scholars Under Fire” project reveals that when censorship spreads rampantly, it does not restrict itself to views and people one opposes; it also comes, sometimes with even more fervor, for those who hold similar views.