It’s dispiriting to start the day dealing with an NPR piece like this, in which the New York branch produced a nationally-broadcast 50-minute discussion of free speech featuring no defenders of free speech. Instead, we hear from several guests who all advocate (without explicitly saying so) some kind censorship.

The issue, of course, is hate speech, which currently is permitted by the courts with a few carved-out exceptions (speech designed to cause predictable and imminent physical violence, harassment in the workplace, physical threats, and so on). The guests (see below) don’t like just those few exceptions, and think they should be expanded to deal with speech that causes psychological harm (i.e., offense) recognized as equivalent to physical harm. After all, psychological harm does produce physiological reactions. Ergo, they’re the same and should be treated the same under the law.

The discussion includes several mischaracterizations of the First Amendment (see Taibbi’s beef below), including workplace harassment seen as presently permitted free speech, even though it isn’t. And they go through past litigation by the courts the yielded the current construal of the First Amendment, but somehow manage to imply that these litigated cases show that perhaps the First Amendment isn’t so clear cut, and could use some more tweaking. Well, it isn’t clear cut, but I, for one, find the courts’ winnowing pretty damn good, and would be very wary of cutting back further on free speech. That would include prohibiting “hate speech”, which, after all, is some people’s “free speech”.

In the end, one has little idea of how or even whether the guests would alter the First Amendment. I get the sense that they want the amendment reexamined and changed, but they won’t go so far as to say that openly. (After all, it’s altering the Bill of Rights!) Instead, they make noises about “making a better world”, assuming that this will get rid of the speech that Andrew Marantz (the main speaker) finds offensive.  But there will always be bigots, as well as those calling for social change that other people find offensive. So yes, of course we should become less hateful and more empathic, but this show, after all, was about freedom of speech and the First Amendment, not a World of Love. The show is curiously inconclusive, except that you get the impression that all four participants want some kind of censorship. Have a listen to the show below, and see if I’m wrong (click on screenshot) below.

First, though, there’s this blurb on the site from WNYC:

“The right to throw a punch ends at the tip of someone’s nose.” It’s the idea that underlies American liberties — but does it still fit in 2021? We look back at our country’s radical — and radically inconsistent — tradition of free speech. Plus, a prophetic philosopher predicts America 75 years after Trump.

1. Andrew Marantz [@andrewmarantz], author of Anti-Social: Online Extremists, Techno-Utopians, and the Hijacking of the American Conversation — and our guest host for this hour — explains what he sees as the problem with free speech absolutism. Listen.

2. John Powell [@profjohnapowell], law professor at UC Berkeley, P.E. Moskowitz [@_pem_pem], author of The Case Against Free Speech: The First Amendment, Fascism, and the Future of Dissent, and Susan Benesch [@SusanBenesch], Director of the Dangerous Speech Project, on our complicated legal right to speak. Listen.

3. Andrew and Brooke discuss the philosopher Richard Rorty, whose work can teach us much about where the present approach to speech might take us, as a nation. Listen.

Throughout the show you’ll hear free-speech advocates characterized as “free speech absolutists”, although no advocate of the First Amendment, including me, thinks that all speech should be permitted. “Free speech absolutists” should its place beside other misguided pejorative terms like “fundamentalist atheists”.

And although Marantz makes fun of the slippery-slope argument, this is not something to be laughed off. If you start banning speech that offends others, who is to be the censor?  All the good liberals on the show think that The Decider will be another good liberal, but as we know from Trump and his minions, this is not the case. They want to ban speech that many liberals favor, as in the Republican-dominated drive to ban “critical race theory” (CRT) from being taught in schools. But, for example, CRT could simply be construed by teachers as an honest examination of slavery and of the genocide of Native Americans, which kids really do need to learn. Yet the laws being passed by state legislatures might ban even that.

And, as I’ve mentioned—as does Taibbi below—limitations on free speech were used to suppress the civil rights movement in the Fifties and Sixties. This is why it’s dangerous to make the argument that “offensive” or “hate” speech should be banned, restricted, or even attacked. As Taibbi says,

The most important problem of speech regulation, as far as speech advocates have been concerned, has always been the identity of the people setting the rules. If there are going to be limits on speech, someone has to set those limits, which means some group is inherently going to wield extraordinary power over another. Speech rights are a political bulwark against such imbalances, defending the minority not only against government repression but against what Mill called “the tyranny of prevailing opinion.”

This isn’t new; it’s a point that Christopher Hitchens made repeatedly in his defense of free speech.

But I’m jumping the gun. In his latest Substack column, which you can read for free (but do consider subscribing), Matt Taibbi comes down hard on NPR for this disingenuous show. Click on the screenshot below to read his shortish piece: 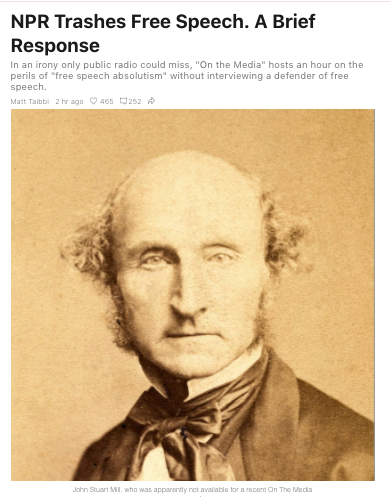 I’ll give a couple of quotes by Taibbi from this excellent piece, and wind up with a kvetch about how liberals seemingly want make society less liberal, which is what will happen when “offensive” speech gets banned.

What Taibbi says here is absolutely on the mark:

The guests for NPR’s just-released On The Media episode about the dangers of free speech included Andrew Marantz, author of an article called, “Free Speech is Killing Us”; P.E. Moskowitz, author of “The Case Against Free Speech”; Susan Benesch, director of the “Dangerous Speech Project”; and Berkeley professor John Powell, whose contribution was to rip John Stuart Mill’s defense of free speech in On Liberty as “wrong.”

That’s about right for NPR, which for years now has regularly congratulated itself for being a beacon of diversity while expunging every conceivable alternative point of view.

I always liked Brooke Gladstone, but this episode of On The Media was shockingly dishonest. The show was a compendium of every neo-authoritarian argument for speech control one finds on Twitter, beginning with the blanket labeling of censorship critics as “speech absolutists” (most are not) and continuing with shameless revisions of the history of episodes like the ACLU’s mid-seventies defense of Nazi marchers at Skokie, Illinois.

And, like Taibbi, I was stunned by the argument made by Powell about the ACLU defending the Nazi Party’s right to demonstrate in Skokie in 1977. Powell construes the whole thing as a case of psychological harm to Nazis as well as Jews, since had the Nazis been prohibited from marching, they would have been psychologically harmed. Ergo, if you think it’s not ok for Jews to suffer psychological damage by watching Nazis march, it’s also not okay for Nazis to be harmed by prohibiting their marching. That is about as disingenuous as you can get.

Taibbi points out the fatal flaw in this reasoning (his emphasis below):

I was stunned by Marantz and Powell’s take on Brandenburg v. Ohio, our current legal standard for speech, which prevents the government from intervening except in cases of incitement to “imminent lawless action”:

MARANTZ: Neo-Nazi rhetoric about gassing Jews, that might inflict psychological harm on a Holocaust survivor, but as long as there’s no immediate incitement to physical violence, the government considers that protected… The village of Skokie tried to stop the Nazis from marching, but the ACLU took the case to the Supreme Court, and the court upheld the Nazis’ right to march.

POWELL: The speech absolutists try to say, “You can’t regulate speech…” Why? “Well, because it would harm the speaker. It would somehow truncate their expression and their self-determination.” And you say, okay, what’s the harm? “Well, the harm is, a psychological harm.” Wait a minute, I thought you said psychological harms did not count?

This is not remotely accurate as a description of what happened in Skokie. People like eventual ACLU chief Ira Glasser and lawyer David Goldberger had spent much of the sixties fighting for the civil rights movement. The entire justification of these activists and lawyers — Jewish activists and lawyers, incidentally, who despised what neo-Nazi plaintiff Frank Collin stood for — was based not upon a vague notion of preventing “psychological harm,” but on a desire to protect minority rights.

In fighting the battles of the civil rights movement, Glasser, Goldberger and others had repeatedly seen in the South tactics like the ones used by localities in and around Chicago with regard to those neo-Nazis, including such ostensibly “constitutional” ploys like requiring massive insurance bonds of would-be marchers and protesters.

. . . .By the end of the segment, Marantz and Gladstone seemed in cheerful agreement they’d demolished any arguments against “getting away from individual rights and the John Stuart Mill stuff.” They felt it more appropriate to embrace the thinking of a modern philosopher like Marantz favorite Richard Rorty, who believes in “replacing the whole framework” of society, which includes “not doing the individual rights thing anymore.”

It was all a near-perfect distillation of the pretensions of NPR’s current target audience, which clearly feels we’ve reached the blue-state version of the End of History, where all important truths are agreed upon, and there’s no longer need to indulge empty gestures to pluralism like the “marketplace of ideas.”

Indeed, the “progressive” liberal “marketplace of ideas”, like a store in early Soviet Russia, stocks only one brand. That’s why John McWhorter, who wants to introduce another brand into the discourse on race, has been attacked so strongly. There’s a right way and a wrong way to think, and we needn’t even consider the “wrong” way.

Ironically, it’s the Left that’s been the most potent defender of free speech, and now it’s the Left that is oh-so-gently trying to get rid of it. The Right, of course, is far from exculpated on this issue, but if you review the last five years of FIRE’s “disinvitation database”, which chronicles campus attempts to stifle speech or deplatform speakers, a strong majority of the incidents come from the Left.

When NPR starts saying that we need to start hacking away at the First Amendment, or devise a new Constitution without “individual rights”, you know it’s time to cancel your subscription. You can use the money to subscribe to Taibbi’s site ($50/year), where you won’t hear this kind of odious palaver.