Author Freddie deBoer, in his Substack column below, answers my title question with a firm “no”.  And although the evidence is circumstantial (see below), I tend to think he’s right. (If you don’t know who deBoer is, his bio is here; he’s an author who says he’s “a Marxist of an old-school variety” and has little sympathy with modern social-justice movements.) 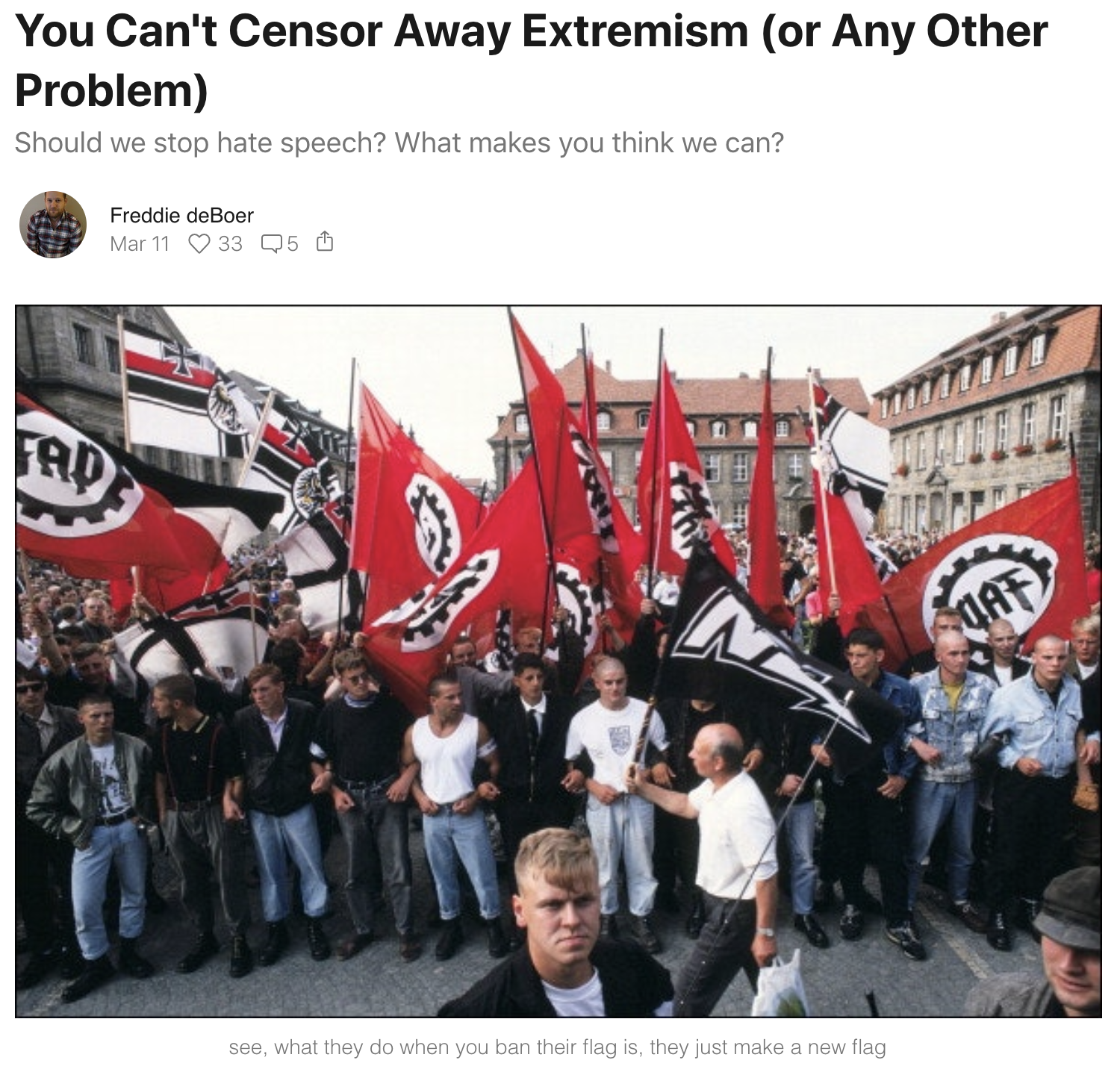 deBoer begins with a good point: the issue of whether we should censor “hate speech” (which of course is a slippery concept) can be taken both as an empirical issue—do laws against hate speech actually work in suppressing both speech and hate?—and a normative one—is it ethical to censor speech in this way? The first question should be answered before the second. For if laws against hate speech are ineffective, there’s no point in debating whether we should have them: we shouldn’t. Why create laws that have no palpable consequences?

deBoer then presents two pieces of evidence that laws against hate speech don’t work. These involve countries having such laws: Germany and France. I’ll show just his thoughts on Germany:

Germany has arguably the most aggressive anti-hate speech etc. laws in the world, or at least outside of those authoritarian countries that already significantly restrict speech in general. The concept is called Volksverhetzung, or incitement to hatred, and it has been broadly interpreted for decades, resulting in aggressive government action against perceived bigotry. The country is home to the expansive and frequently-evolving Strafgesetzbuch section 86a, which is the legal framework that outlaws overt Nazi symbols and literature in the country and which renders Holocaust denial illegal. Federal prosecutors and the Ministry of the Interior regularly move against organizations deemed far-right or hate groups. Does all of that aggressive government posture actually prevent those groups from flourishing?

No! No it does not! Germany has a vast, varied, and influential far-right movement. All those hate speech laws have not prevented extremist parties from operating out in the open, or their leaders from occupying positions of power, or the parties themselves from earning significant victories. As in, 12.5% of the vote and third place overall kind of victories. Germany bans groups it declares far-right extremists all the time. They respond in the way any child would be able to predict: they just rebrand. All of Germany’s many protections against far-right extremism have not prevented fascists from infesting the country’s security services. Racism? Not shrinking, growing. Anti-Semitism? You got it, baby! The Holocaust denial I mentioned is illegal? Well, they’re stepping up efforts to shut it down, which might seem encouraging until you realize that people only step up efforts to shut something down when it’s been on the rise. Of course, Germans didn’t need more evidence of the futility of censoring far-right views, given that the Weimar Republic had laws forbidding what we would now call hate speech. How did that go?

The utter failure of German hate speech laws to actually slow the growth of right-wing extremism doesn’t make them harmless. On the contrary, their bad ideas have been exported to countries with repressive governments and the onus placed on private internet companies makes them de facto arbiters of what can and cannot be expressed.

He makes the same argument for France, which bans hate speech and “permits the government to disband groups that promote racism”, as well as banning Nazi symbols and groups.  Yet, deBoer argues, “hate groups” like the National Front/Rally party are doing quite well in France, there’s hatred of Muslims by non-Muslims and vice versa, and Marine Le Pen has become politically quite popular.

Now these are not controlled experiments. One could argue, for example, that without hate speech laws the amount of hatred, racism, and pervasiveness of hate groups would be even higher than they are in Germany and France. But at least you can see that there is surely not less hate speech in these countries than in, say, the U.S., where we have no hate speech laws.  Hatred and racism don’t seem to have been driven to ground in Germany and France.

deBoer also points out, as many have before (including Hitchens), that once you give a government power to restrict speech in this way, you can’t guarantee that the restrictions will always operate in your favor. His example is France’s recent attempt to prevent citizens from sharing photos and videos of police violence, something that surely should not be restricted. As always, the salient question is “Who will decide what speech is permitted and what speech banned?” There is no good answer to this question; the censor should always be the person who’s making the argument.

Besides claiming that hate speech laws are ineffective, and thus not worth considering, one might make positive arguments for allowing hate speech. I’ve always said, for example, that Holocaust denialism should not only be legal, but people should read it. That is the way I learned what the evidence for the Holocaust really was—in the face of denialist claims like “neither Hitler nor any other high Nazi official promulgated a policy of exterminating the Jews.” (That claim was bogus, but I didn’t know the counterevidence.) The same goes for creationism: if you’re going to counter the 73% of Americans who believe in some form of creationism, you need to know what their arguments for it are (that is, arguments beyond religious brainwashing.) Note that I am not saying that creationism should be taught as science in biology class, only that one shouldn’t ban creationist arguments. And, as Mill pointed out, if you allow people to broadcast hate speech rather than doing it in samizdat, you learn who your enemies are and what they really believe, making it easier to identify and thus counter them.

At the end, deBoer makes a good point and then offers a solution to “hate”, though he himself undercuts that solution:

When people say they want to ban hate speech, what they really mean is that they want to ban hate. And you may as well say that we should ban jealousy, or anger, or greed, or fear. Hate is an endemic part of the human experience and so hate speech always will be too, even after they implant behavior-modification chips in our brains. Ban all the words you like; people will find new ways to express hate. Censorship is always an end run around a larger issue, a deeper, more vexing, stickier issue. The problem is never the expressions you wish to repress themselves but the existence of the people who would express them, and those people are ultimately the product of conditions in the world you can’t control. You cannot eliminate hate from the world, and no one alive will live to see the end of fascism. What you can do is to mitigate the negative effects of hate as best you can by empowering targeted groups and by trying to present a more compelling and attractive vision than the fascists. But that’s wild, unrealistic stuff. Try to stamp out extremism and hate with censorship when every attempt to do so has failed in the history of the world, cool. Try to make people see why you’re right and the other side is wrong? That’s too crazy to contemplate.

In my view, the only kinds of “hate speech” that should be banned are the types already banned under the U.S. courts’ interpretation of the First Amendment: personal and persistent harassment, calls for action and physical threats that are likely to lead to imminent violence, and harassment that creates an intolerable and uncomfortable workplace.

48 thoughts on “Can you reduce hate by banning hate speech?”