Lately the New York Times went soft on dowsing, and of course they’ve been perpetually soft on astrology. Nobody seems to bring up the paper’s penchant for woo when they’re praising it for “fact-based journalism.” Even in the op-eds or “personal” stories—stories that, like today’s—give credence to woo, the Times fails to call attention to the lack of evidence for these phenomena. The result is that some readers, perhaps open to “spiritual” things that don’t involve goda, get sucked into the black hole of confirmation bias.

Today’s story is particularly invidious because it’s about reincarnation, and author Sara Aridi basically endorses her own sister’s belief in the phenomenon—a belief so strong that her sister eventually became a “past-life regression therapist” herself.

Click to read and weep; author Sara Aridi is actually a NYT employee, described as “a staff editor on the Home team, where she produces the home screen and mobile app. She joined The Times in 2016.”

To summarize, author Aridi and her family are Druze (a Middle Eastern religion), and one Druze belief is that “every human being is reincarnated. Your body is a shell, and your spirit can claim another life form to live on indefinitely.” Some Druze also think that people can remember parts of their previous lives.

One of these was Aridi’s sister Heba, who was only three years old in Lebanon when she claimed that her real name was Nada (and began making sandwiches for her “husband” Amin) It turns out that a woman named Nada lived half an hour away, but had died, and did have a husband named Amin.  It’s not at all clear that the putative soul of Heba, that of Nada, left Nada’s body before or after Heba “recovered” her memories.

At any rate, Nada’s relatives came to visit Heba because they’d heard of this remarkable reincarnation. (Tellingly, Aridi says “word gets around in small villages”.) They allowed Heba to visit their home, and when she did so Heba coughed up a few unconvincing “memories” about an old lady and a garden that jibed with the past.

Eventually Heba gave up all the reincarnation stuff. But then, after moving to Los Angeles, Heba discovered “past-life regression therapy”, one of those forms of therapy that convinces you that you’ve repressed important parts of your memories or life, and whose practitioners aren’t objective but tendentious. (They resemble the “recovered-memory therapists” who make their living convincing people that they were abused when they were children, and have simply “repressed” the memory.)

Heba was so taken by this therapy that she became certified in the practice herself and started treating others. And so the termites dined further.

I’ll simply reproduce the rest of the article in which author Sara Aridi gives considerable credence to her sister’s beliefs and practices. But wait! There’s more! She touts not only reincarnation, but also astrology AND “oracle cards”, which I suppose are like tarot cards. I’ve put some “reincarnation might be real” bits in bold.

On the other side of the country, I was starting a career in journalism, and was ambivalent about Heba’s new profession. I wondered why I had accepted her experience with Nada so matter-of-factly without looking into it further. Questions nagged at me: How do I explain something I don’t understand? Are someone else’s memories enough evidence of them having a reincarnated soul? It wasn’t until this past year, while my sister and I were living under the same roof again, that I started to truly reconcile our worldviews.

Before that, living on my own over the past several years meant I could carefully curate my life, and engage only with people who shared my beliefs, mainly journalism colleagues who prioritized evidence-based facts. I thought I was open-minded — until I had to discuss politics and spirituality with my family around the dinner table.

Note the half derogatory phrase “evidence-based facts”. What other kinds of facts are there? But Aridi continues:

Last December, during the great conjunction of Jupiter and Saturn, the first time in 800 years the two planets aligned incredibly close to each other and were visible in the sky, I joined Heba and our pandemic pod for a ceremony at a friend’s house. We sat in a circle, drew cards from an oracle deck and wrote down our reflections and hopes in an attempt to manifest our goals for 2021.

It was new and refreshing for me; it felt like much-needed talk therapy after an isolating year. And, my oracle cards were freakishly on point. The first said “Growth,” and mentioned leaving behind antiquated relationships, beliefs or systems. The beliefs I needed to let go of were not the spiritual ones though.

No, Sara clearly needed to let go of the “evidence-based facts” and retain her view that there’s something to reincarnation. But of course these generalized statements like “growth” can apply to anyone. There’s more:

I still have questions — many questions — about past-life regression therapy, but I support Heba and her work. Some of my closest friends have become her clients. She has repeatedly offered to conduct a session with me, but I don’t think I believe in the therapy enough to go under. And if I do, I’m afraid of what I would discover. This life has been challenging enough at times, I don’t know that I could bear the memories of another one.

That, of course, assumes that “going under” might give her evidence of a previous life.  There’s more:

I also drew a second card that night: “Boundaries.” Heba and I glanced at each other. The card displayed a symbol of a red jaguar, its fangs out. As my friend read the card aloud, I was amazed by how elegantly it spoke to my struggle to be independent from my family while accepting them. The jaguar “has a healthy sense of boundaries and respects magic and the unknown,” it said. I may not be ready to confront my past lives, but at least I’m more open to having fuller experiences in this one.

Well, the last sentence sounds good, but what does it mean? Why would accepting past lives, which the author explicitly does in the last sentence, make her more open to having fuller experiences now? Wasn’t it the “oracle cards” that woke her up?

No matter, it’s all a bunch of hooey. One could of course do controlled tests of people who have claimed past lives rather than the usual anecdotal “matching” of feelings with data, but so far as I know, the whole schmear rests on these kinds of anecdotes.  And if you claim a memory of a past life in which, for example, you were of a different language group, you should be able to speak that language fluently. The evidence doesn’t support that.

Psychologist Ian Stevenson has claimed to find convincing evidence for reincarnation, but it’s largely anecdotal (that of course doesn’t completely invalidate it), but has also been criticized by others.

But the strongest evidence against reincarnation is that there is neither evidence for a soul that can move between bodies, nor any known physical mechanism that someone’s personality and memories can leave the body and somehow enter another body (and when does the latter happen?). In my view, it’s all wish-thinking, based on the desire to be immortal in the face of the fact that we’re not immortal. So we simply posit that our soul lives on my making itself at home in someone else’s body. (In fact, the observation that people have a strong motivation for wanting to live on after death should make us even more cautious about accepting reincarnation.)

Like all claimed spiritual or psychic phenomena, we can’t say for certain that reincarnation doesn’t occur, but the lack of a mechanism for the process, or rigorous testing by skeptics, certainly doesn’t give the phenomenon much credibility. As Carl Sagan used to say, “Extraordinary claims require extraordinary evidence.” And we certainly don’t have that kind of evidence in Heba’s testimony. All we have are a bunch of half-baked assertions that don’t survive even slightly rigorous scrutiny.

For reasons that defy me, the New York Times evinces a weakness for these spiritual and numinous phenomena. Is the paper catering to the large fraction of Americans who believe in reincarnation? For, according to a 2018 Pew Survey, fully a third of American adults accept reincarnation. Have a look at the depressing first line of this table from the survey, which is somewhat mitigated by the “atheist” line lower down. 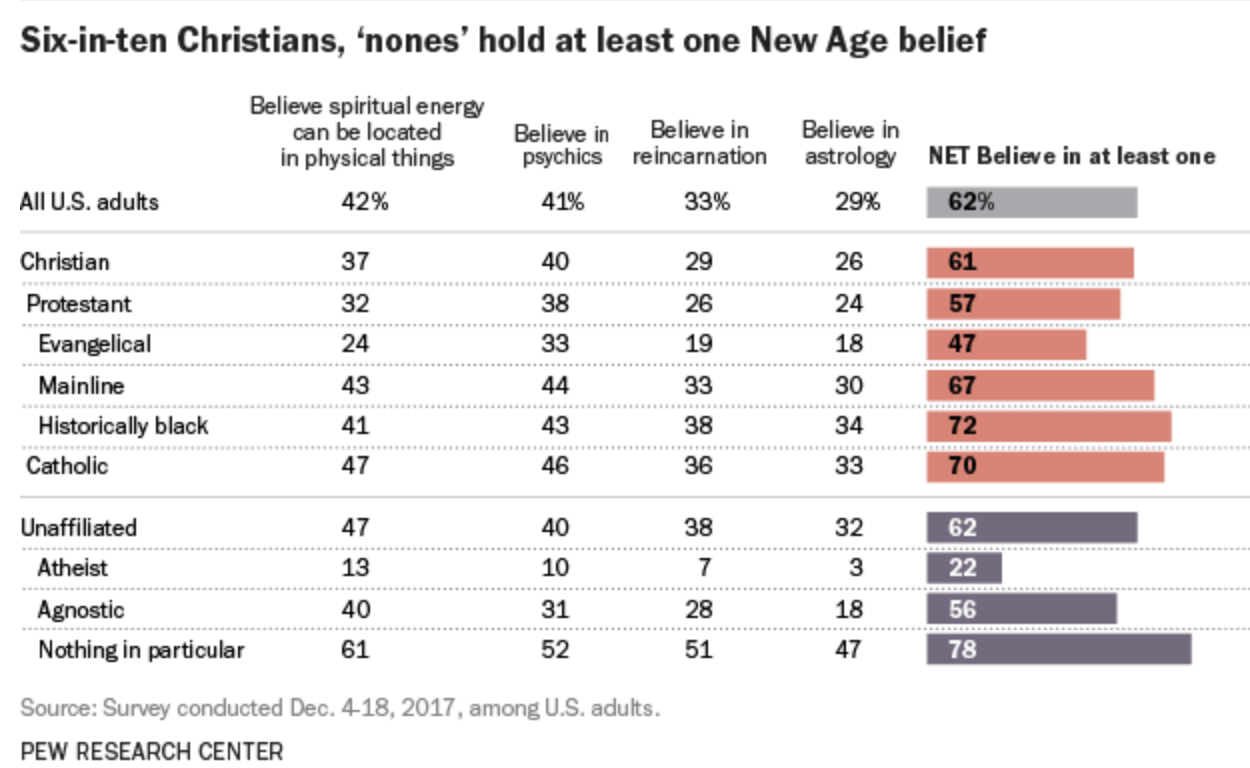 So be it. Those who argue that the NYT remains the newspaper of record must also explain why it shows such a weakness for woo.

Oh, and I’ll add my usual beef here. People tend to valorize the Dalai Lama because he’s written a book saying that science and Buddhism are compatible. Yet it’s clear that the Dalai Lama believes in reincarnation, and I suspect he accept the related principle of karma. These are not supported by science.

I’ll finish with some humor. Several decades back, the Washington Post had a contest in which readers were asked to alter familiar words and then redefine them. Here’s one entry I remember:

Reintarnation: Coming back to life as a hillbilly.

42 thoughts on “Unbelievable woo from the NYT: the touting of reincarnation (as well as astrology and oracle cards) by an editor”