As John McWhorter begins his biweekly “Newsletter” for the New York Times (and there are some newsletters by others that look good), we also see the onset of one that promises to be much more dire. Author Tish Harrison Warren, according to her online bio, is truly washed in the blood in the lamb, and with bona fides like these, why wouldn’t the NYT hire her to to write every Sunday about “matters of faith in public live and private discourse”?

Tish Harrison Warren is a priest in the Anglican Church in North America. She is the author of Liturgy of the Ordinary: Sacred Practices in Everyday Life, which was Christianity Today’s 2018 Book of the Year, and the forthcoming Prayer in the Night: For Those Who Work, or Watch, or Weep (IVP 2021). She has worked in ministry settings for over a decade as a campus minister with InterVarsity Graduate and Faculty Ministries, as an associate rector, with addicts and those in poverty through various churches and non-profit organizations, and, most recently, as the writer-in-residence at Church of the Ascension in Pittsburgh, Pennsylvania. She is a monthly columnist with Christianity Today, and her articles and essays have appeared in the New York Times, Religion News Service, Christianity Today, Comment Magazine, The Point Magazine, and elsewhere. She is a founding member of The Pelican Project and a Senior Fellow with the Trinity Forum. She lives with her husband and three children in Pittsburgh, Pennsylvania.

What you have to ask yourself is this: do you really want to read about matters of faith from a true believer? Aren’t there tons of websites that already contain such stuff?

Well, the first sample is below. Read and weep—have a pack of hankies on hand. 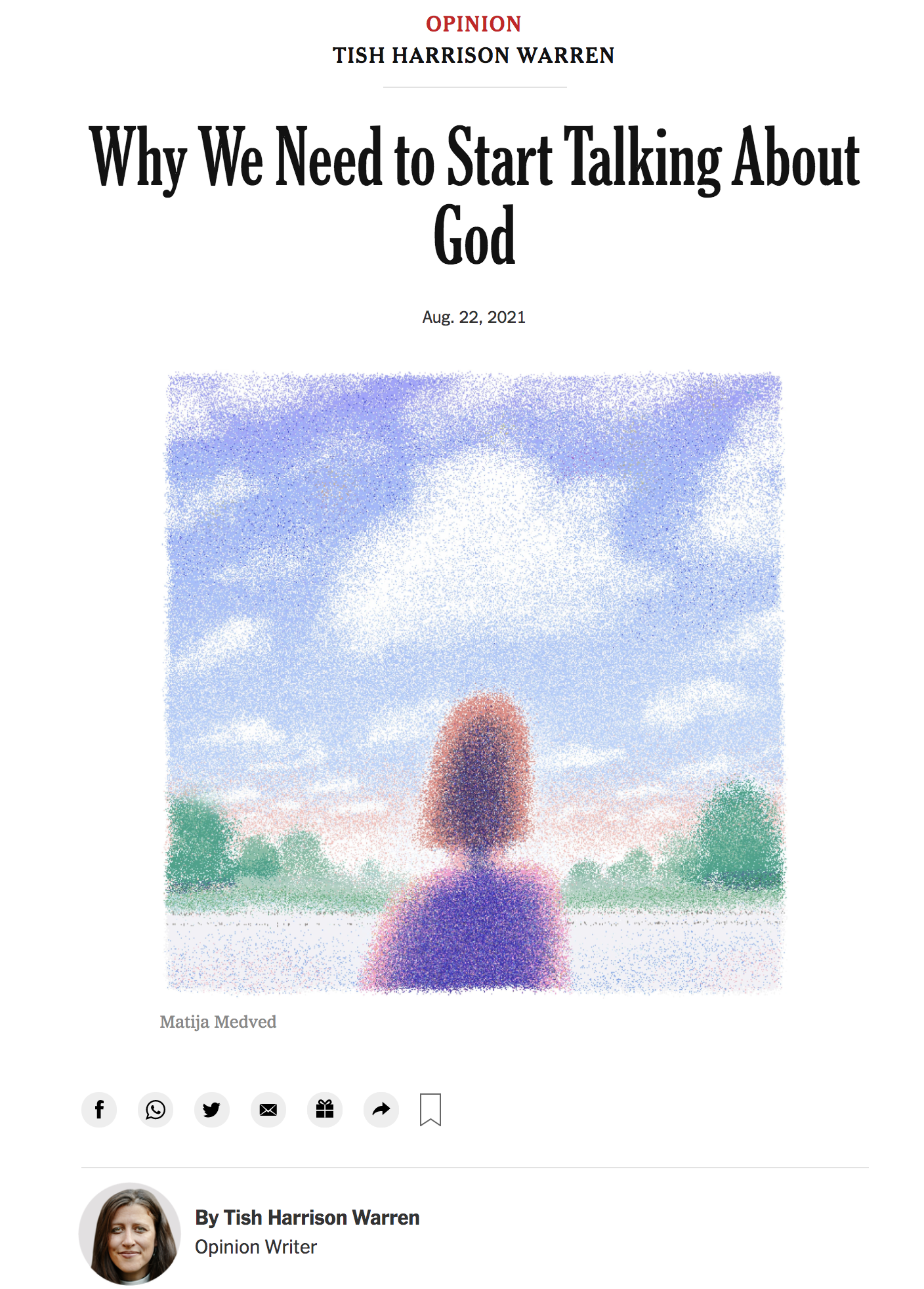 I can find nothing substantive in this newsletter, nor do I think that liberal religionists will, either. These are the points Warren makes:

a. The priest’s first words in each week’s sermon are about God, not the congregation or “a mention of the weather or how nice everyone looks this week”. She finds that strange. I don’t.

Each Sunday in my Anglican church in Austin, Texas, the priest leading the service takes his or her place in front of the congregation and begins by saying the opening acclamation, usually, “Blessed be God, Father, Son and Holy Spirit.”

What has surprised me since I first attended an Anglican service just over a decade ago is that we begin not with welcoming anyone in the pews but with a direct announcement about God.

. . . Part of why I find this moment strange is that I’m habituated by my daily life and our broader culture to focus on the “horizontal” or immanent, aspects of life — those things we can observe and measure without reference to God, mystery or transcendence. This can affect my spiritual life, flattening faith into solely the stuff of relationships, life hacks, sociology or politics.

But each week, as a church, the first words we say publicly directly address the “vertical,” transcendent dimension of life. We do not have just an urbane, abstracted conversation about religion, but we speak as if God’s presence is relevant — the orienting fact of our gathering.

b. Faith intersects with the secular world. (SURPRISE!)

Karl Barth, a 20th-century Swiss theologian, is credited with saying that Christians must live our lives with a Bible in one hand and a newspaper in the other. Barth, who was a leader of a group of Christians in Germany resisting Hitler, understood that faith is not a pious, protective bubble shielding us from the urgent needs of the world. It is the very impetus that leads us into active engagement with society. People of faith must immerse ourselves in messy questions of how to live faithfully in a particular moment with particular headlines calling for particular attention and particular responses.

c. We need to keep discussing faith and the secular world even when religion is on the wane.

Membership in a house of worship has declined steadily in the United States over the past eight decades and, according to a Gallup poll, dropped below 50 percent this year.

So we must ask: Is faith worth discussing anymore? In the vast world of subjects that one could read about, from architecture to Zumba, why make space for a newsletter about faith and spiritual practice?

The answer to her last two questions are, respectively, “no” and “no good reason.”

But Warren has a reason, though I doubt it applies widely to NYT readers. It’s because those who are already religious want to read about religion, and they need religion to answer The Big Questions:

As a pastor, I see again and again that in defining moments of people’s lives — the birth of children, struggles in marriage, deep loss and disappointment, moral crossroads, facing death — they talk about God and the spiritual life. In these most tender moments, even those who aren’t sure what exactly they believe cannot avoid big questions of meaning: who we are, what we are here for, why we believe what we believe, why beauty and horror exist.

These questions bubble up in all of us, often unbidden. Even when we hum through a mundane week — not consciously thinking about God or life’s meaning or death — we are still motivated in our depths by ultimate questions and assumptions about what’s right and wrong, what’s true or false and what makes for a good life.

Clearly, and literally, this column is meant to preach to the choir. And just as clearly, Warren’s column is meant to emphasize our need to reach out to the divine, though any secularist with two neurons to rub together knows that we make our own meaning, and we can ponder what’s true and false and how to live without invoking gods. In fact, it’s better not to invoke a deity for which there’s no evidence when trying to find “meaning” or discern truth. Has Warren ever heard of secular humanism?

The rest is palaver, words without meaning, except to tell you to expect more of the same:

This newsletter, like our opening acclamation, acknowledges the presence of God in the world, believing that God, faith and spirituality remain a relevant part of our public and private lives. In it, I will talk about the habits and practices that shape our lives, the beliefs that drive our imaginations, the commitments that guide our souls.

So here’s my opening acclamation. Let’s discuss our deepest questions, longings and loves and the rituals and habits that form who we are and the way we walk through the world, week in and week out.

I have a better idea: let’s not.

Now I’m sure that Pastor Warren is a nice lady, but that doesn’t mean that her lucubrations deserve column inches in the Times every Sunday. Nor do I have to say, “This column is a valuable addition to media discourse.”  Rather, I ask myself WHY ARE THEY PUBLISHING THIS STUFF?  The Times is increasingly osculating not just faith, but also woo like dowsing and astrology. What explains this? I have no answer.

Wouldn’t it be better—wouldn’t it go ahead of the curve—to have a weekly (or at least a semi-regular) column on secularism and nonbelief? There are plenty of people who could write such a piece, and they wouldn’t have to purvey mindless platitudes to do so.

But, Ceiling Cat help me, I have subscribed. I feel like I’ve just bought a hair shirt or a cilice that will cause me constant irritation.