According to a survey just published in Public Understanding of Science, acceptance of evolution is increasing in the United States. Click on the screenshot below to read the article (it’s free), or access the pdf here.

The survey continued data collected over 35 years, but a lot of the methodology is described in the Supplemental Materials, which are not given in this link nor on the journal page, where I can’t find this article (it’s clearly an early publication).  Now other surveys have found a smaller percentage of Americans who accept evolution (see below), but it’s surely because of the different ways the questions were asked.

Here’s the question this survey posed to Americans:

The following question was used in all of the years in this analysis:

Human beings, as we know them today, developed from earlier species of animals. 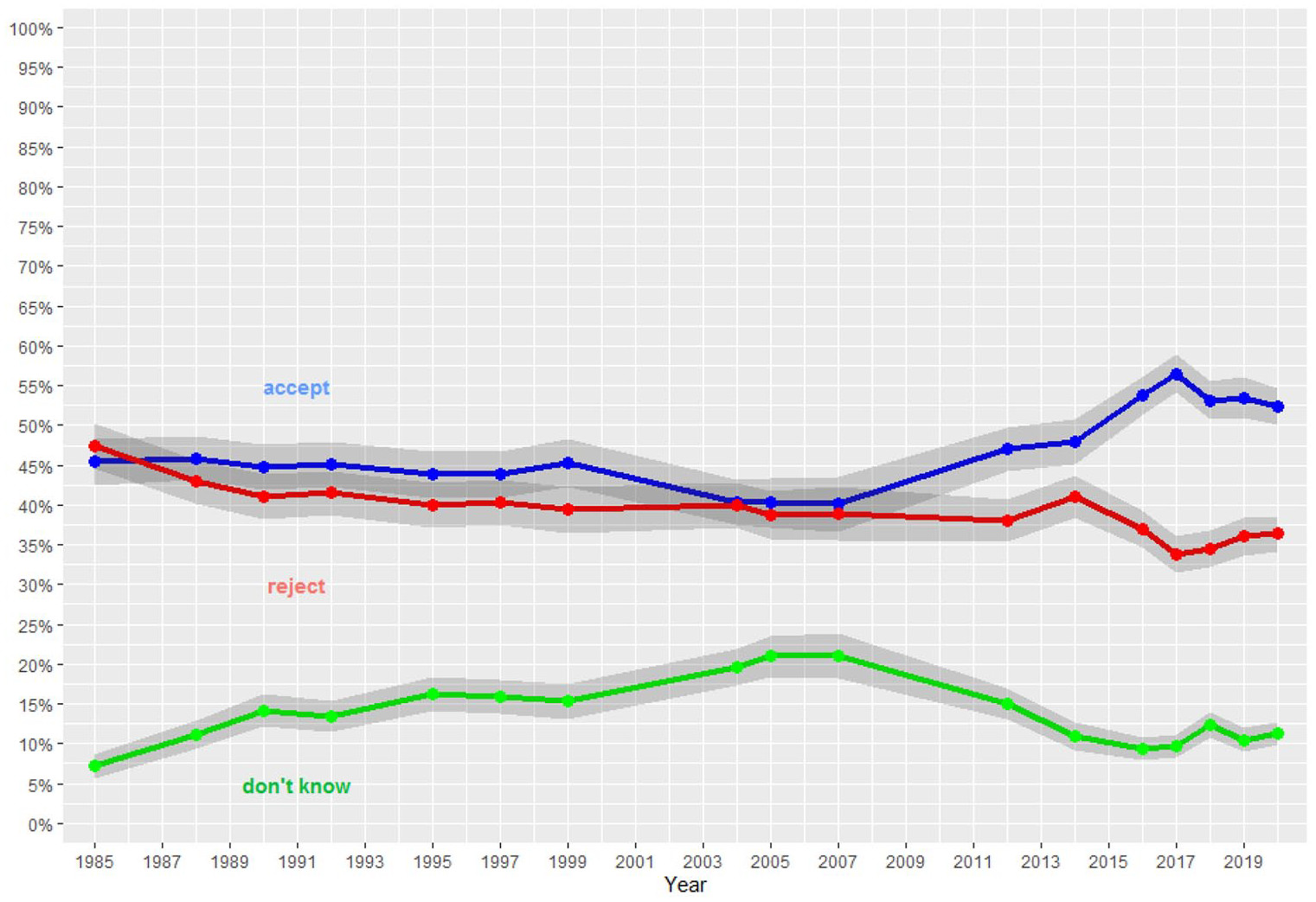 Acceptance must be the sum of “definitely true and probably true”, while rejection would be the converse.

If you look at a similar survey of a Gallup poll over 36 years (below), you see a different pattern, but that’s because they surveyed for more than just acceptance of evolution: they asked whether people accepted human evolution as purely naturalistic (22%), accepted human evolution but with God guiding it (33%), or simply rejected human evolution in favor of Biblical creationism (40%). The figure for rejection is pretty much the same as shown in the figure above, but the difference in “evolution acceptance” is undoubtedly due to the fact that “acceptance” below includes evolution guided by God. If you added that up with the naturalistic acceptors, the Gallup poll would show that 55% of Americans “accepted” human evolution, again close to the data above. But there are two types of evolution being accepted, one involving supernatural intervention. (Intelligent design would qualify, in this way, as “acceptance of evolution.”)

The data, then, are not that disparate between the two polls, but the apparently heartening 54% acceptance of evolution in the poll above seems to conceal the fact that most acceptors see a hand of God guiding evolution. I don’t find a teleological or theistic view of evolution all that heartening, for it still gives credence to divine intervention. And although the authors mention that disparate results of different surveys depend on the questions asked, it would have been nice had they compared the data above with that below. 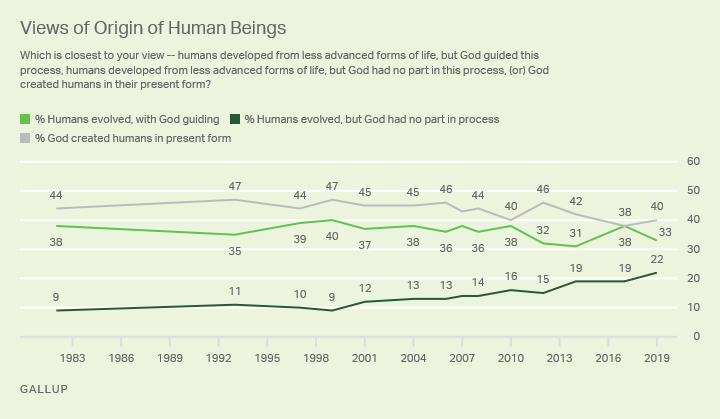 But “demographic data” did not include religion, which, as usual, turns out to be the most important factor determining how one answered the new polls. (The authors play this down in the paper, perhaps because the National Center for Science Education, two of whose members or former members are authors of the survey, have always been accommodationists.)

Nevertheless, when you do a path analysis of how these factors interact, and parse out the individual effects of factors that normally interact (for example, Republicans are more likely to be religious, and therefore to reject evolution), you find that “fundamentalist” religion has by far the biggest effect on evolution acceptance—in a negative direction, of course. (Because I can’t access the supplementary material, I can’t see how they determined whether a religious person was “fundamentalist”.)

Here’s the complicated path analysis and the weight of each factor. Religious fundamentalism has nearly twice the effect, in isolation, of any other factor on whether one accepts or rejects evolution. 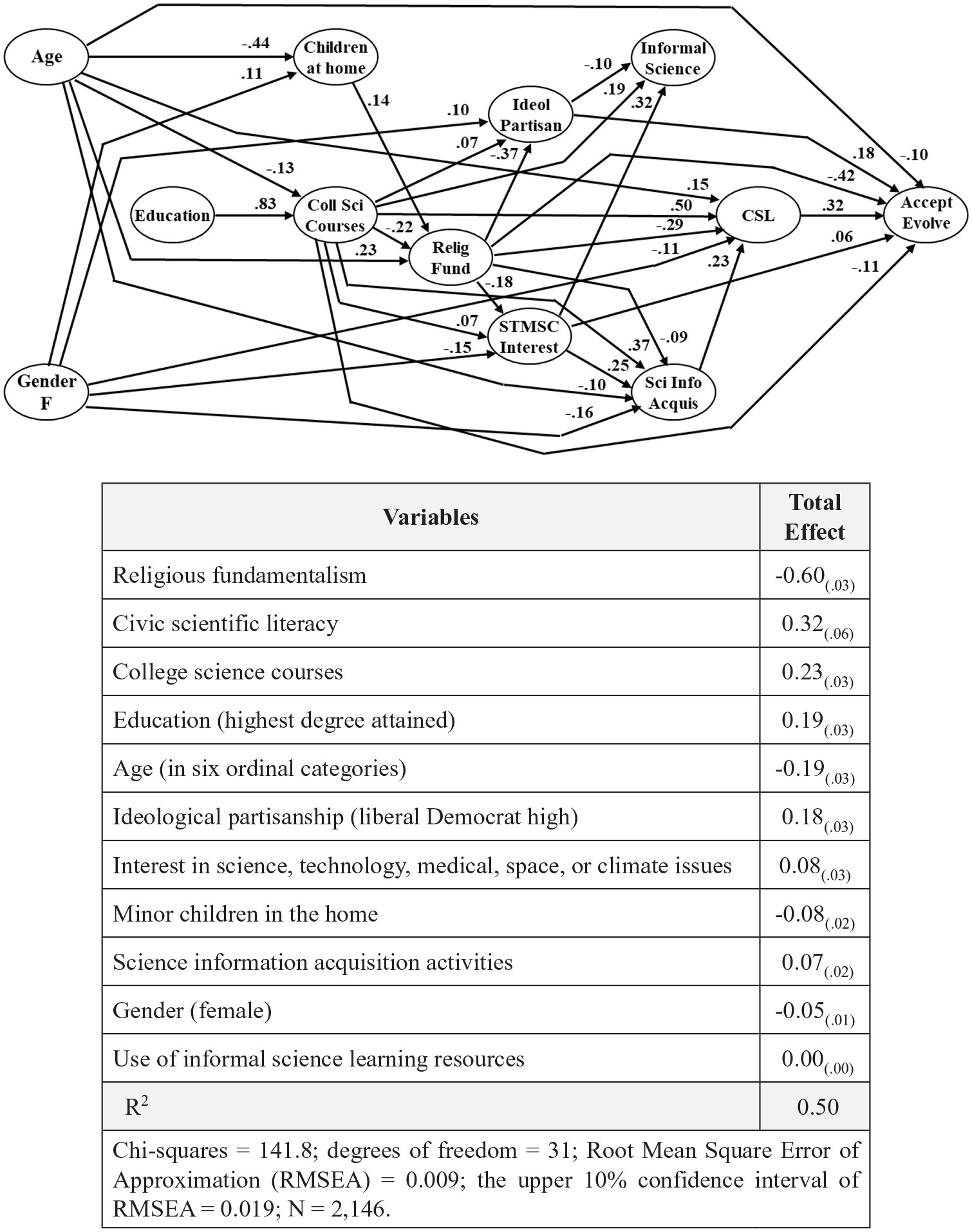 Two more points. More men than women accepted evolution (57% vs 51% in 2019, a reduced disparity from 1988, when the data were 52% and 41%, respectively). This is probably because, on average, women are more religious than are men. And in terms of politics, here are the data for its relation to evolution. As you might expect, the more liberal you are, the more likely you are to accept evolution, and there is a huge difference between conservative Republicans and Liberal democrats in accepting evolution (34% vs. 83% respectively in 2019).  Republicans just can’t get with the program!

There’s one other point I want to mention. The authors claim that it’s really “fundamentalist religion” that’s at odds with evolution, not really other forms of religion, though I’ve maintained otherwise. Here’s what they say:

Religious fundamentalism plays a significant role in the rejection of evolution. The historical explanation of the low rate of acceptance of evolution in the United States involves the central place of the Bible in American Protestantism. In a country settled piecemeal by colonists of varying religious views and without a state church, it was natural for people of faith, especially Protestants who already accepted the principle of sola Scriptura, to privilege the Bible—or their interpretation of it—as the primary source of religious authority and an inerrant source of information about history and science as well as faith and morals. In contrast, religion in European countries is strongly structured by ecclesiastic institutions and the public receptivity to creationism has been limited as a result (Blancke et al., 2014; Branch, 2009).

It is thus a particular form of religion that is at the foundation of American anti-evolutionism of the twentieth and twenty-first centuries, not religion in general (see Coyne, 2012, for a dissenting view). Indeed, evolution is routinely taught in Catholic parochial schools in the United States, and mainstream Protestant denominations similarly accept evolution (Martin, 2010). While not all anti-evolutionism originates in Fundamentalism and its inerrantism about the Bible, it largely reflects a conservative form of Protestantism with relatively inflexible and inerrantist religious views (Scott, 2009), which we have been calling fundamentalism.

I would deny the claim that it’s only Protestant fundamentalism that’s at odds with evolution instead of religious belief in general. I say this for two reasons/

First, across the world, where Protestant fundamentalism doesn’t have such sway, you still see a negative correlation between religiosity and evolution. Here are data I published in a paper in 2012. There’s a strong negative correlation between religiosity and acceptance of human evolution across 34 countries, but it’s significant even omitting the U.S.point. Further, the only country lower in evolution acceptance than the US is Turkey, which is a Muslim nation. 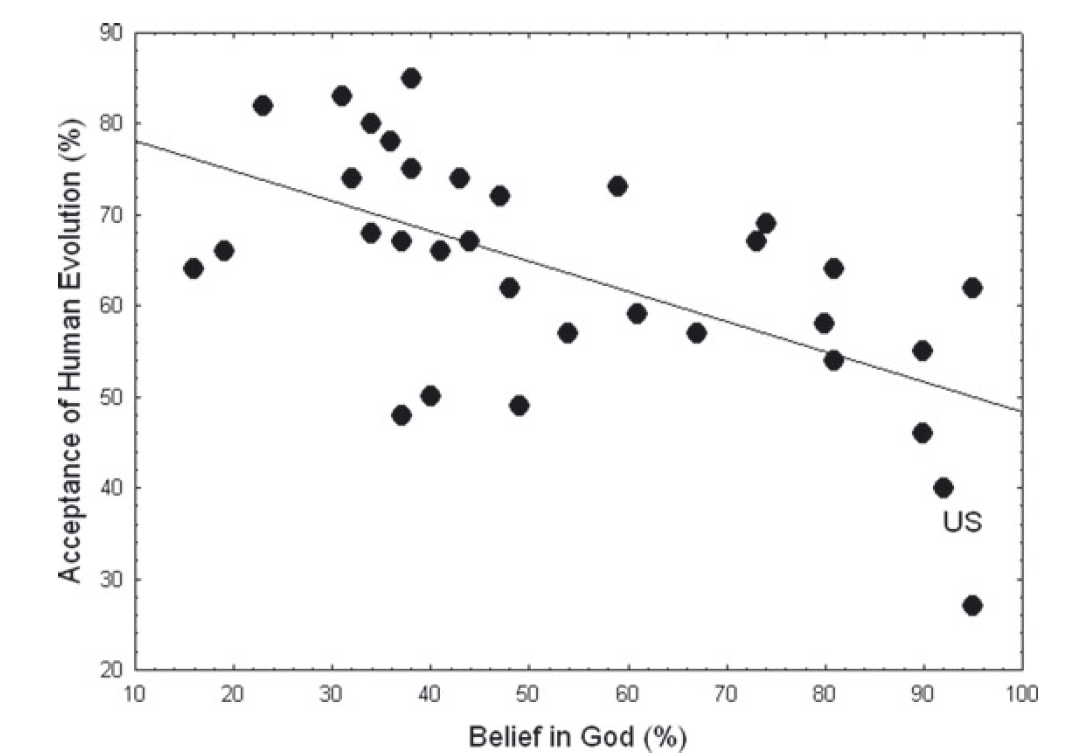 More important, here are data taken from the Gallup survey mentioned above. Look at “religion”. Yes, Protestants are more likely to be creationists than are others (note that they don’t subclassify “fundamentalist Protestants”), but the Catholics, touted above as being good for teaching evolution in their schools, are still 34% young-earth creationist! What is taught is not always what is accepted!

No, it’s religion of all stripes in the U.S. that’s inimical to accepting evolution. I wish the authors would have mentioned these data as well.

When will nearly everyone in America accept evolution, then? When America is like Iceland: a country that is basically atheistic.

20 thoughts on “Public acceptance of evolution grows in the U.S.”