If you subscribe to the New York Times, you can sign up for a twice-weekly essay in your email by John McWhorter (go here to subscribe), which, though also on the paper’s op-ed page isn’t available for free viewing. Although McWhorter fretted about the effect on his academic duties of writing two longish pieces per week, it’s hard to resist when the Gray Lady calls.

His first essay, which as a subscriber you can get for free by clicking below, is an essay on the origin of the term “woke”. Once a term of approbation used by blacks, is now a pejorative word used by many to mean what “politically correct” used to mean: annoying and over-the-top flaunting of liberal virtues.  But how did its meaning change? 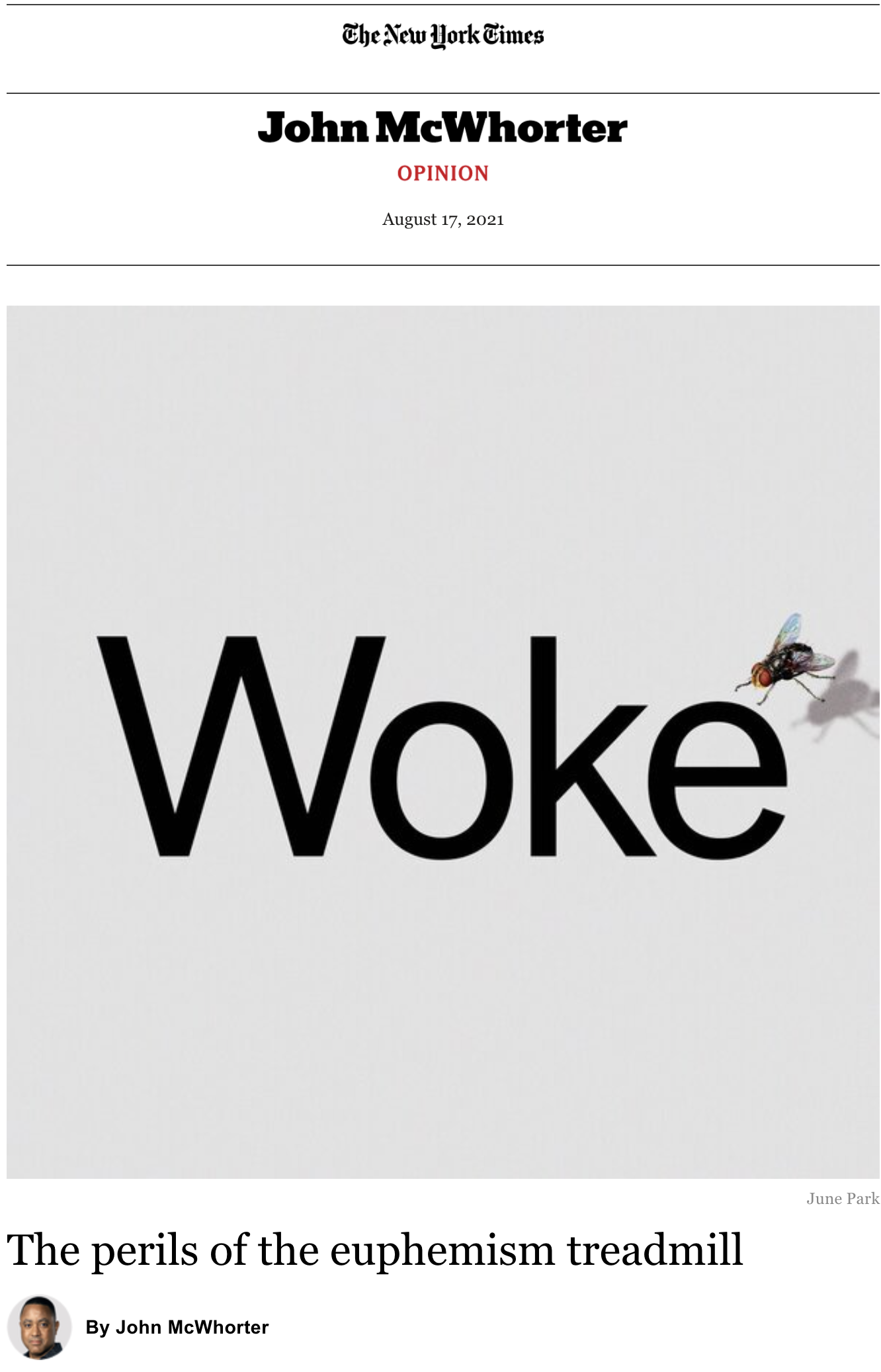 I have to say that, while instructive, McWhorter’s essay is not nearly as engaging as the pieces he writes on his own website, “It bears mentioning“. That’s undoubtedly because he can’t be as incendiary about race in the NYT as he can at Substack. But beyond that, I can’t make a lot of sense out of McWhorter’s explanation of how “woke” changed from an expression of solidarity and awareness among black people into a term of mockery among white people and those of other ethnicities.

Here’s his chronology and line of argument.

First, “woke” has been part of black argot for a long time. McWhorter notes that Lead Belly uses the phrase “stay woke” in a 1938 recording, meaning “black people: be alert to physical danger.” Over the next decades it kept a positive connotation as expressing empathy for black issues. It first appeared in the NYT in 1962, and, says McWhorter, was probably adopted in the 1980s by whites as a sign of racial empathy. It was still a positive term about 6 years ago, but then something happened: it became a replacement for the term “politically correct,” which itself may have started out as a positive term (I don’t remember it being used that way), which had long ago became a sneering reference to mindless adherence to Leftist ideology.

The horizontal leap of “woke” from black to white parlance, like the transfer of a gene, kept its function intact. It was, as they say, a cultural appropriation by whites of black street talk, like the word “salty” for “irritable.” So how did it wind up changing its meaning and turning from a positive term to this?:

No more. These days, “woke” is said with a sneer. It’s a prisoner in scare quotes as often as not (“Why ‘wokeness’ is the biggest threat to Democrats in the 2022 election”) and typically uttered with a note of condescension somewhere between the way comedians used to talk about hippies and the way anybody talks about, well, rather than a word beginning with “a” you’ll find discussed, among other places, here, I will sub in “jerks.”

Indeed, that’s how I use it, and have been called out by some readers for that. Is it racist to use the term given that it came from black argot and used to have a positive spin? I don’t think so, because although it was taken from black jargon, it’s not applied solely, or even exclusively, to blacks. It means the same thing as “politically correct”, which is a general sneer at the Left, regardless of race.

McWhorter falls down on two counts in this piece. First, and less important, he’s discursive, throwing in a lot of material irrelevant to the question at hand, like the new usage of “racial reckoning” and “problematic”. Those terms are fascinating on their own, but have nothing to do with the change of “woke” (well, a few of us use “problematic” as a sneer). But one gets the feeling that McWhorter—who had complained earlier about having to write long-form essays twice a week—was padding the piece with irrelevant stuff.

More important, he doesn’t clearly explain, at least to me, how woke changed its connotation from good to bad. It appears to have something to do with the Right starting to make fun of the term, just as they supposedly did with the term “politically correct.” But then the explanation of changing meaning doesn’t make a lot of sense to me.

McWhorter starts by reaffirming that “wokeness used to refer to views that “any reasonable person” should have:

In a view like that, there is, inevitably, a certain self-satisfaction. And in some of those holding this kind of view, that self-satisfaction will express itself in dismissal and abuse of those ungifted with the third eye in question. The result will be resistance, much of it no less pretty, and this was why, just a few years after my college friend used the term, “politically correct” had become the slur “P.C.,” hurled at the left from the right and even from the center.

“Woke” has just undergone the same process: Those bristling at being accused of not being woke have pushed back to the point of leaving the term in bad odor. Certainly “woke” has a racial substrate, but the larger process here is the race-neutral euphemism treadmill, a term I am ripping off from Steven Pinker. A well-used word or expression is subject to ridicule or has grimy associations. A new term is born to replace it and help push thought ahead. But after that term spends some time getting knocked around in the real world, the associations the old term had settle back down, like gnats, on the new one. Yet another term is needed. Repeat.

This was how we got from “politically correct” to “woke.” This was the path from “crippled” to “handicapped” to “disabled” to “differently abled.” Certainly it can be about race matters, as “slum clearance” became “urban renewal.” But just as often, it’s things more race neutral. There was a time when one called a trade union a combination, and the draft was often called conscription. The old words had, for better or for worse, menacing associations that made it seem useful to sub in other ones.

In other words, people started using “woke” in a negative way because those who used it positively were arrogant and condescending. Ergo, it was subject to ridicule. And in this McWhorter may be correct. But then McWhorter reverts to the old term “politically correct,” which I don’t remember ever having been used positively. (Perhaps it was before my time.) So, he implies “woke” became negative because for some reason it was needed to replace the negative term “politically correct.”

Now McWhorter is a linguist, so I hesitate to say his explanation is muddled.  Did the term become negative as a way of making fun of arrogant people who used it? Or was it needed as a replacement for the term “politically correct”, which was itself getting obsolete and overused? The analogy with the change “crippled” through “handicapped” to “differently abled” is not apt, because “crippled” has a negative connotation (which the original “woke” didn’t), while “differently abled” is a term that arose to try to express empathy with the disabled. Yes, some people mock “differently abled”, but it’s often used positively, while “woke” has become wholly negative. Pinker’s “euphemism treadmill”, at the link, doesn’t clarify matters much, for it explains such changes as ones meant to unload the negative freight carried by words, misguided as such changes may sometimes be. But “woke” is not like “Negro” or “crippled”. It’s a positive term that took on a negative meaning, and not as a euphemism.

I remain confused. If McWhorter wanted to say that “woke” became negative as a reaction to snobs who used it positively, well, that takes just one sentence.

McWhorter’s column is good, but discursive and less clear than it could be—something unusual for a man who pulls no punches. I blame it on the NYT, and on McWhorter’s desire to write in a less incendiary way and in a longer form. I hope he continues these pieces, as his thoughts deserve a much wider audience than they get from Substack. But he should at least return a bit to the tone and style of the pieces on his own site, or in his conversations with Glenn Loury on “The Glenn Show.”

It has not escaped my notice that I may have misunderstood what McWhorter’s trying to explain; after all, my insomnia kicked in big time last night and it’s hard for me to think. Readers are welcome to correct any misapprehensions of fuzziness of thought on my part.

33 thoughts on “McWhorter’s first NYT essay: The origins of “woke” as a pejorative”