One of the distinguishing features of Woke journalism (or discourse in general) is that it’s sometimes impossible to distinguish from satire. That’s why the “Grievance Studies” papers of Pluckrose, Lindsay, and Boghossian got accepted in some academic journals. And it makes it harder to attack via satire, since such attacks might be taken to be promotions of Wokeism.

This new article in the Guardian, which starts by showing the racist/genocidal/white-supremacist roots of America’s iconic food, would be hilarious as a spoof, but it’s real, and a sad commentary on our times. After a long discussion of author Patel’s claim that every ingredient of the pie, as well as the gingham cloth it rests on, reflects oppression, the piece segues into a general rant about capitalism.  Some of its claims have merit (e.g., we really should do away with tipping), but there’s absolutely nothing new in the piece save the Woke Deconstruction of Apple Pie, and who really cares about that? 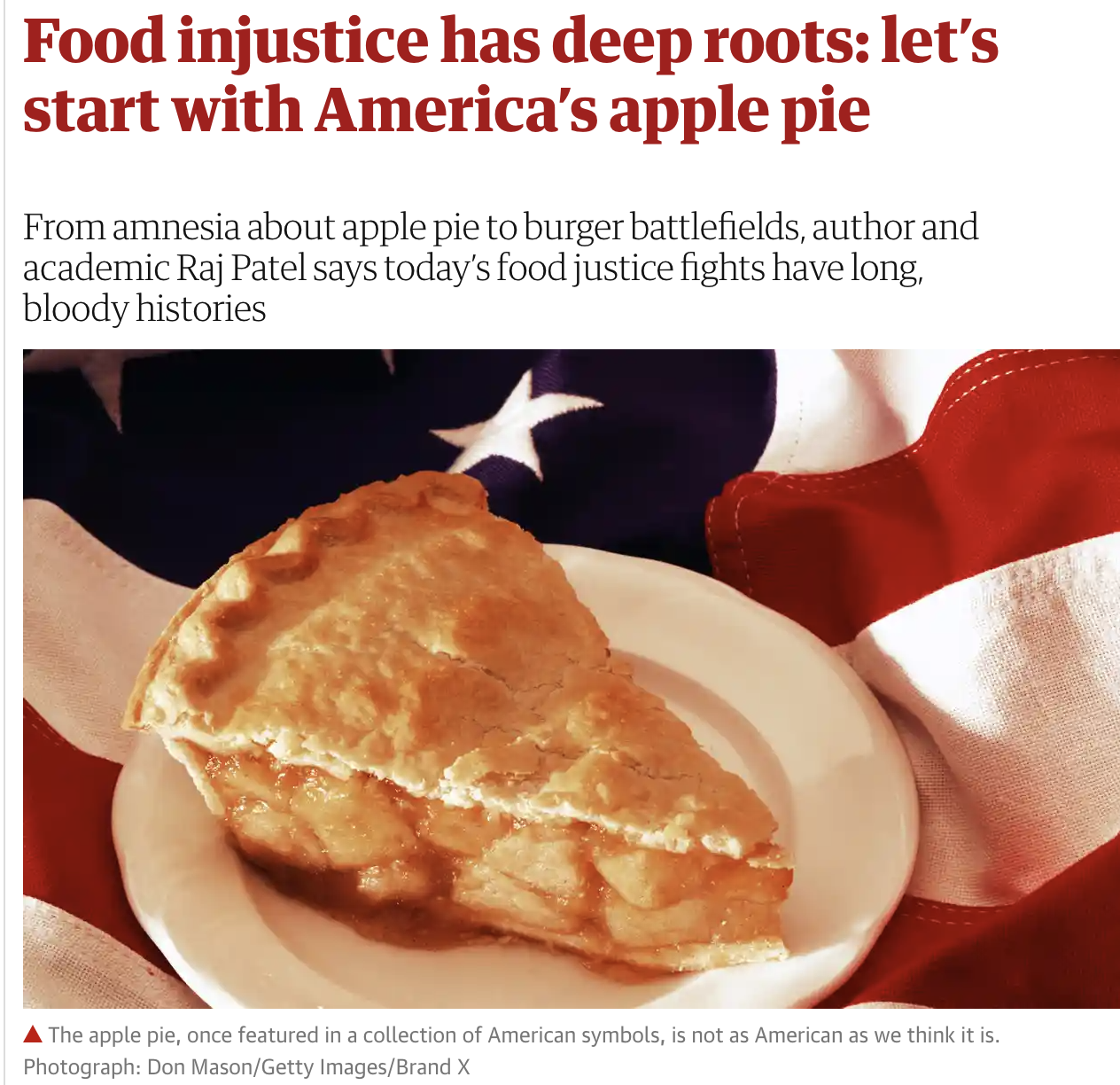 I’ll first put up the opening five paragraphs to give an idea of the article’s tenor, and then mention briefly its other plaints. If the words below don’t make you queasy, you’ve gotten too jaded! Every trope is here: genocide, cultural appropriation, oppression, slavery, bigotry, and so on:

Resting on gingham cloth, a sugar-crusted apple pie cools on the window sill of a midwestern farmhouse. Nothing could be more American. Officially American. The Department of Defense once featured the pie in an online collection of American symbols, alongside Uncle Sam and cowboys.

Not that apples are particularly American. Apples were first domesticated in central Asia, making the journey along the Silk Road to the Mediterranean four thousand years ago. Apples traveled to the western hemisphere with Spanish colonists in the 1500s in what used to be called the Columbian Exchange, but is now better understood as a vast and ongoing genocide of Indigenous people.

Not that the recipe for apple pie is uniquely American. It’s a variant on an English pumpkin recipe. By the time the English colonized the new world, apple trees had become markers of civilization, which is to say property. In Virginia, apple trees were used to demonstrate to the state that land had been improved. John Chapman, better known as Johnny Appleseed, took these markers of colonized property to the frontiers of US expansion where his trees stood as symbols that Indigenous communities had been extirpated.

Not that the sugar on the crust is uniquely American. Sugar cane was first brought to the US by Jesuits in 1751, but most US sugar remained an import until the Haitian revolution. When enslaved workers seized the French colony in 1791, European capitalists sought new sugar cane fields and workers. French merchants of sugar and slavery landed in Louisiana in the late 1700s. Within 50 years, the US produced a quarter of the world’s sugar cane, and New Orleans had become a concomitant hub of the slave trade. After emancipation, the economics of sugar shifted. The American civil war pushed the frontier of sugar westward. Hawaii’s sugar plantations grew during US Reconstruction. When the Philippines was a US colony between 1898 and 1946, Filipino workers were exempted from the “Asiatic barred zone”’ to work in the US sugar plantations in Hawaii, replacing more militant Japanese labourers.

Not that the gingham on which our apple pie rests is uniquely American. Columbus recorded cotton being used and worn during his first voyage by his Indigenous hosts. The gingham pattern likely originated in south-east Asia, the word deriving from the Malay genggang, a striped cloth that arrived in Europe as Europe colonized Asia. Cotton from India became central to the British East India Company, representing three-quarters of the corporation’s exports by 1766. As Sven Beckert’s Empire of Cotton tells, this war capitalism enslaved and committed acts of genocide against millions of Indigenous people in North America, and millions of Africans and their descendants through the transatlantic slave trade. In the process, cotton laid the basis of finance, police and government that made the United States.

. . . Since this is quite a lot to acknowledge, it is easier to misremember. In the drama of nationalist culture, the bloody and international origins of the apple pie are subject to a collective amnesia.

No comment, save to say that this is The 1619 Project applied to a dessert. I could argue that some of this is ridiculously accusatory (i.e., apple pie is just a variant of an English pumpkin pie), but the article satirizes itself. Not only that, but it effaces its serious points in a dumb endeavor to show the “bloody and international origins of the apple pie.”

Patel then goes on to indict everything involved in the American food chain, showing that “the apple pie is as American as stolen land, wealth, and labor. We live its consequences today.” Will you ever be able to eat another slice of apple pie after reading that?

Here are the other sins in the pie food chain:

Food system as a whole: women are overrepresented, and the pay is dreadful (This is one of those complaints that is true but that’s true but has been made many times before).

Tipping. Agreed; we should abolish it and raise servers’ wages. But what does this have to do with pie?

Hamburgers.  Not only was beef raised by cowboys, who were exploited workers, but the meat was processed by a meatpacking industry portraying in Upton Sinclair’s 1907 novel The Jungle. (Curiously, author Patel doesn’t delve into the present-day meat industry, very different from the one portrayed in Sinclair’s horrifying account.)

There’s a long discussion of various strikes in the food industry and in agriculture, but these are nearly a century old and have nothing obvious to do with either pie or present injustice.

Racial poverty that leads to more hunger in minority communities. I agree that this is a legacy of racism and slavery that persists, but there’s no mention of poverty in any groups other than minorities. What dominates the discussion here is not class but race.

Author Raj Patel is described as

the author of Stuffed and Starved: Markets, Power and the Hidden Battle for the World’s Food System. He is currently working on a documentary and book about the future of the food system

As I said, the article is over the top in several ways, though some of its complaints are valid.  Half of it involves a deconstruction of the pie, an endeavor that is both pathetic and humorous, and goes to show only that you can take any food object—indeed, any object—and show that it is racist.

Some of the history no longer applies, and some of the injustices Patel describes have been largely rectified. My major complaint about the piece is one that I absorbed from Grania: it doesn’t accomplish anything. The points about exploitation of food workers has been done many times before, and to make your thesis by deconstructing pie does nothing except alienate (or amuse) people who eat pie. I doubt that this article will rectify a single particle of injustice, but it does provide Patel with a way to dine out on oppression.

If you want to make a political point, you don’t do it this way: I can’t imagine Orwell writing such an over-the-top, near satirical screed.  When I read it, instead of getting outraged I simply changed the famous 1946 quotation of theologian Martin Niemöller in my mind:

First they came for apple pie, and I did not speak out—because I do not eat apple pie.

Then they came for the hamburgers, and I did not speak out—for I am cutting back on red meat.

Then they came for the chicken nuggets and I did not speak out—for I do not eat nuggets and don’t even know what’s in them.

Then they came for Coca-Cola—and I could no longer buy the world a Coke because there were no eaters left.

56 thoughts on “Why apple pie is a symbol of racism, genocide, white supremacy, and cultural appropriation”