George Orwell’s 1946 essay “Politics and the English Language” is one of my favorite essays of all time (you could do worse, though, than read all his collected essays, many of them masterpieces). It not only teaches one how to write clearly, but shows how political writers deliberately use obfuscation and euphemism to blur language for ideological ends, hiding political brutality and base motives. You can read it here, and should, like me, do so at least once a year. It will improve your prose. There’s a reason why Christopher Hitchens wrote a book called Why Orwell Matters in 2003.

Andrew Sullivan is also a fan of that essay, as all writers should be, and highlights it in one section of his weekly column (click on screenshot below). But he gives it a modern twist, showing how the kind of obscurantist writing decried by Orwell is still with us—pervasive in the works of the Woke. 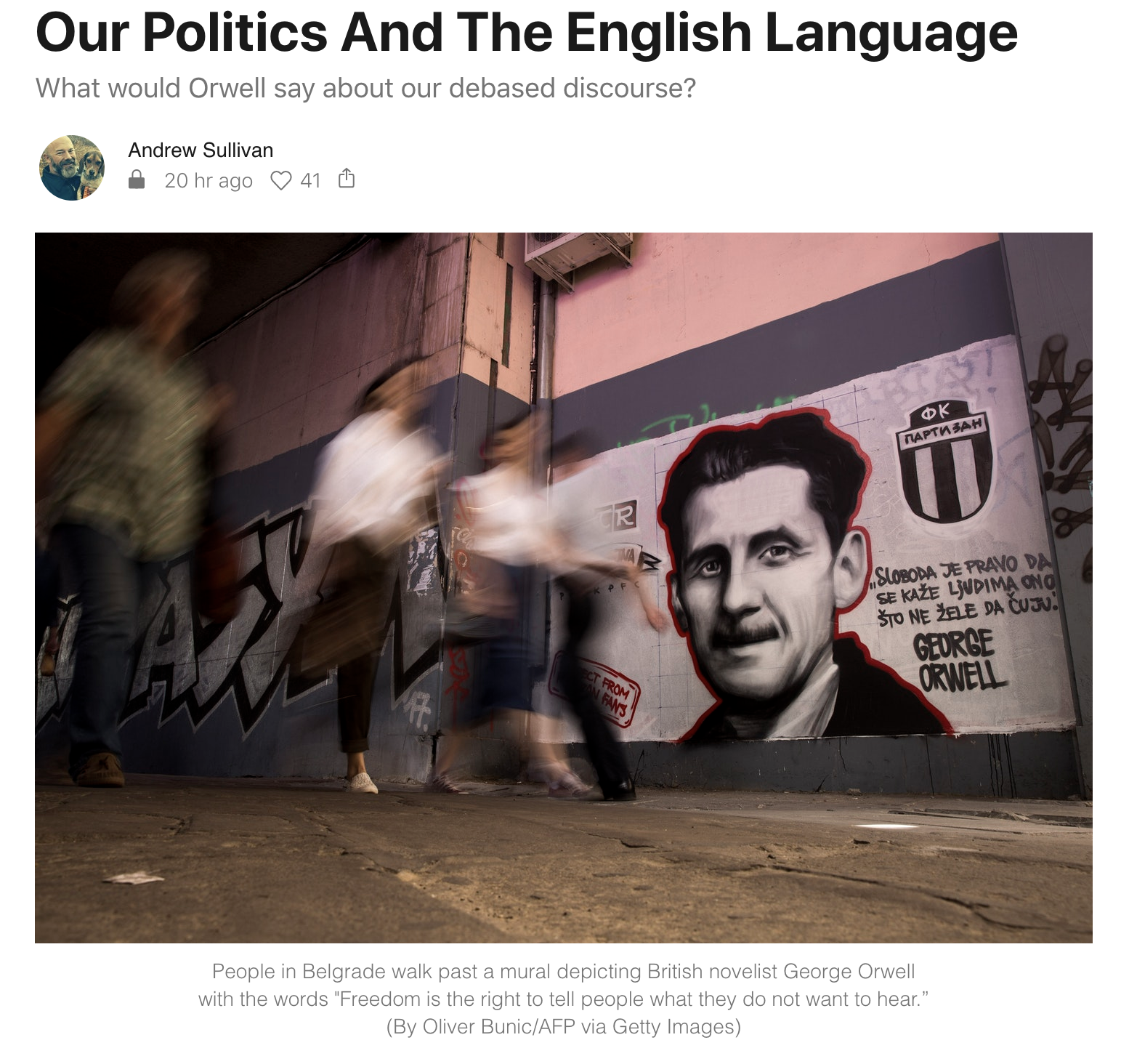 Reviving Orwell’s thoughts in light of modern politics was a great idea. He’d have a few harsh words to say about the woke!

First, though, let’s look at the five principles of good writing Orwell lists at the end of his essay:

i. Never use a metaphor, simile or other figure of speech which you are used to seeing in print.

ii. Never use a long word where a short one will do.

iii. If it is possible to cut a word out, always cut it out.

iv. Never use the passive where you can use the active.

v. Never use a foreign phrase, a scientific word or a jargon word if you can think of an everyday English equivalent.

vi. Break any of these rules sooner than say anything outright barbarous.

Then Sullivan gives several abstracts of Woke writing that violate many of these guidelines. I won’t reproduce his critique at length (it’s pretty funny in parts), nor mention the other people who violate these principles (e.g., the group Sullivan calls the “alphabet people” obsessed with gender nouns).

Here’s one example of bad modern writing discussed by Sullivan:

I was just reading about the panic that occurred in the American Medical Association, when their journal’s deputy editor argued on a podcast that socio-economic factors were more significant in poor outcomes for non-whites than “structural racism.” As you might imagine, any kind of questioning of this orthodoxy required the defenestration of the deputy editor and the resignation of the editor-in-chief. The episode was withdrawn from public viewing, and the top editor replaced it with a Maoist apology/confession before he accepted his own fate.

But I was most struck by the statement put out in response by a group called “The Institute for Antiracism in Medicine.” Here it is:

The podcast and associated promotional message are extremely problematic for minoritized members of our medical community. Racism was created with intention and must therefore be undone with intention. Structural racism has deeply permeated the field of medicine and must be actively dissolved through proper antiracist education and purposeful equitable policy creation. The delivery of messages suggesting that racism is non-existent and therefore non-problematic within the medical field is harmful to both our underrepresented minoritized physicians and the marginalized communities served in this country.

Consider the language for a moment. I don’t want to single out this group — they are merely representative of countless others, all engaged in the recitation of certain doctrines, and I just want an example. But I do want to say that this paragraph is effectively dead, drained of almost any meaning, nailed to the perch of pious pabulum. It is prose, in Orwell’s words, that “consists less and less of words chosen for the sake of their meaning, and more and more of phrases tacked together like the sections of a prefabricated hen-house.”

It is chock-full of long, compounded nouns and adjectives, riddled with the passive voice, lurching and leaning, like a passenger walking the aisle on a moving train, on pre-packaged phrases to keep itself going.

Notice the unnecessary longevity: a tweet becomes an “associated promotional message.” Notice the deadness of the neologisms: “minoritized”, “marginalized”, “non-problematic”. As Orwell noted: “the normal way of coining a new word is to use a Latin or Greek root with the appropriate affix and, where necessary, the -ize formation. It is often easier to make up words of this kind (deregionalize, impermissible, extramarital, non-fragmentatory and so forth) than to think up the English words that will cover one’s meaning.” Go back and see if you can put the words “minoritized” or “non-problematic” into everyday English.

His second target is Ibram X. Kendi, who also comes in for it in Sullivan’s “Dissents of the Week” section for proposing a Department of Racism that could vet and reject any U.S. law on the grounds that it creates inequity. But you can read that for yourself. Here’s his critique of Kendi’s language:

I caught a glimpse of Ibram X. Kendi’s recent appearance at the Aspen Ideas Festival, the annual woke, oxygen-deprived hajj for the left-media elites. He was asked to define racism — something you’d think he’d have thought a bit about. This was his response: “Racism is a collection of racist policies that lead to racial inequity that are substantiated by racist ideas.” He does this a lot. He repeats Yoda-stye formulae: “There is no such thing as a nonracist or race-neutral policy … If discrimination is creating equity, then it is antiracist. If discrimination is creating inequity, then it is racist.” These maxims pepper his tomes like deep thoughts in a self-help book. When he proposes specific action to counter racism, for example, he suggests: “Deploy antiracist power to compel or drive from power the unsympathetic racist policymakers in order to institute the antiracist policy.” “Always vote for the leftist” is a bit blunter.

Orwell had Kendi’s number: “The appropriate noises are coming out of his larynx, but his brain is not involved as it would be if he were choosing his words for himself. If the speech he is making is one that he is accustomed to make over and over again, he may be almost unconscious of what he is saying, as one is when one utters the responses in church. And this reduced state of consciousness, if not indispensable, is at any rate favourable to political conformity.” And that conformity is proven by the gawking, moneyed, largely white, Atlantic subscribers hanging on every one of this lightweight’s meaningless words — as if they really were in church.

You can tell from Sullivan’s snide remarks about the Aspen Ideas Festival—which I once attended—and about Atlantic subscribers that he’s pretty ticked off, and in good form.

So what do we do about this abuse of the English language? Sullivan recommends, correctly, that we call it out and ask for clarification:

And that is the only recourse an average citizen has when buried by this avalanche of abstraction: ask the language-launderers what they are really talking about. When some doofus apologizes for the “terrible pain” they have caused to the whatever community, ask them to give a specific example of that “pain.” When someone says “structural racism,” ask: what actual “structures” are you referring to? How do they actually work? Give concrete examples.

When someone calls American society “white supremacy”, ask them how you could show that America is not a form of “white supremacy”. When someone uses the word “Latinx”, ask them which country does that refer to. When someone says something is “problematic”, ask them to whom? When you’re told you’re meeting with members of the BIPOC or AANHPI communities, ask them first to translate and then why this is in any way relevant, and why every single member of those communities are expected to have the same opinion. And when you’re told that today is IDAHOBIT Day, ask them if you can speak to Frodo.

The term “structural racism” is my personal bugaboo, as it’s become a synonym for just “racism”, with the “structural” tacked on to add gravitas and a supposed intensity of malfeasance. But “structural” racism is racism built into some institution or structure, like laws or rules, not simple acts of bigotry. As for “pain,” well, I accept very few of these claims as accurate. “Pain” has become another word for “offense” or even “manufactured offense.”

But I will stop here lest I begin ranting, for Sullivan’s rant is enough. Read it.

45 thoughts on “Sullivan on Orwell on Language”