On May 21 the anthropologist Agustín Fuentes published a tirade in Science against Darwin for being racist, sexist, and white supremacist—the inevitable takedown of a man who was far more liberal than his Victorian contemporaries (Darwin was, for one thing, an ardent abolitionist). And yes, Darwin did entertain some views that were racist and sexist, and thought that the white “race” would eventually supplant other groups. But admitting that is only to admit that he was a man of his time, better than most. (I strongly doubt, for example, that Dr. Fuentes, had he lived at that time, would hardly appear to us today as a paragon of morality!). It’s ludicrous to assert that Darwin should have known better and become a saint among his peers.

At any rate, I pointed out the ideological biases and misapprehensions in Fuentes’s article, Robert Wright did an even better job, and several people have submitted letters to Science criticizing Fuentes’s views.  As Wright wrote, Fuentes confused Darwin’s attempts to understand phenomena like group ranking with approval of group ranking; as Wright said: “Here’s the confusion: In reading Darwin, Fuentes fails to distinguish between an explanation of something and a justification of something.” Darwin did not justify colonialism, white supremacy, or slavery, much less genocide (yes, Fuentes accused Darwin of promoting genocide as well), but was exploring the consequences of possible differences between groups in mentation and ability. That is not to say that Darwin didn’t adhere to some ideas we’d consider unacceptable today, but if you read him, you’ll find precious little of that, and much less than you’d find in many others writing in Darwin’s time.

Now comes another anthropologist, Jonathan Marks, to defend Fuentes and point out Darwin’s “toxic ideas”, as well as criticizing Darwin’s “cult-like” followers. (What is it with anthropologists, anyway?)

As for the “cult”, everybody who knows anything about Darwin knows that his morality did not jibe 100% with modern morality (whose did in the mid 19th century?). Those of us who admire him do so not because he was morally perfect, but because he proposed, in one huge go, a theory that gave pretty much dispositive evidence that organisms evolved, did so slowly, that lineages split, creating a common ancestry between all species, and that the mechanism of adaptive change was natural selection. Those are four or five huge theories, and all have, with time, been shown to be correct. At one go, in one huge book (supplemented by a spate of other ones, including The Descent of Man and Selection in Relation to Sex), Darwin rid the world of centuries of incorrect creationist thought and gave rise to a fertile new field with a million new questions to explore. Now that is an accomplishment worth celebrating!

Marks, however, creates a different confusion: between science on the one hand and scientists on the other. Science is the amoral set of tools we use to find out what seems to be true about nature. Scientists are the imperfect human practitioners of science, and have sometimes bent science to bad or harmful ends (but of course they also created vaccines, all kinds of public health measures, and innumerable practical advances as well as improvements in our understanding of the cosmos). 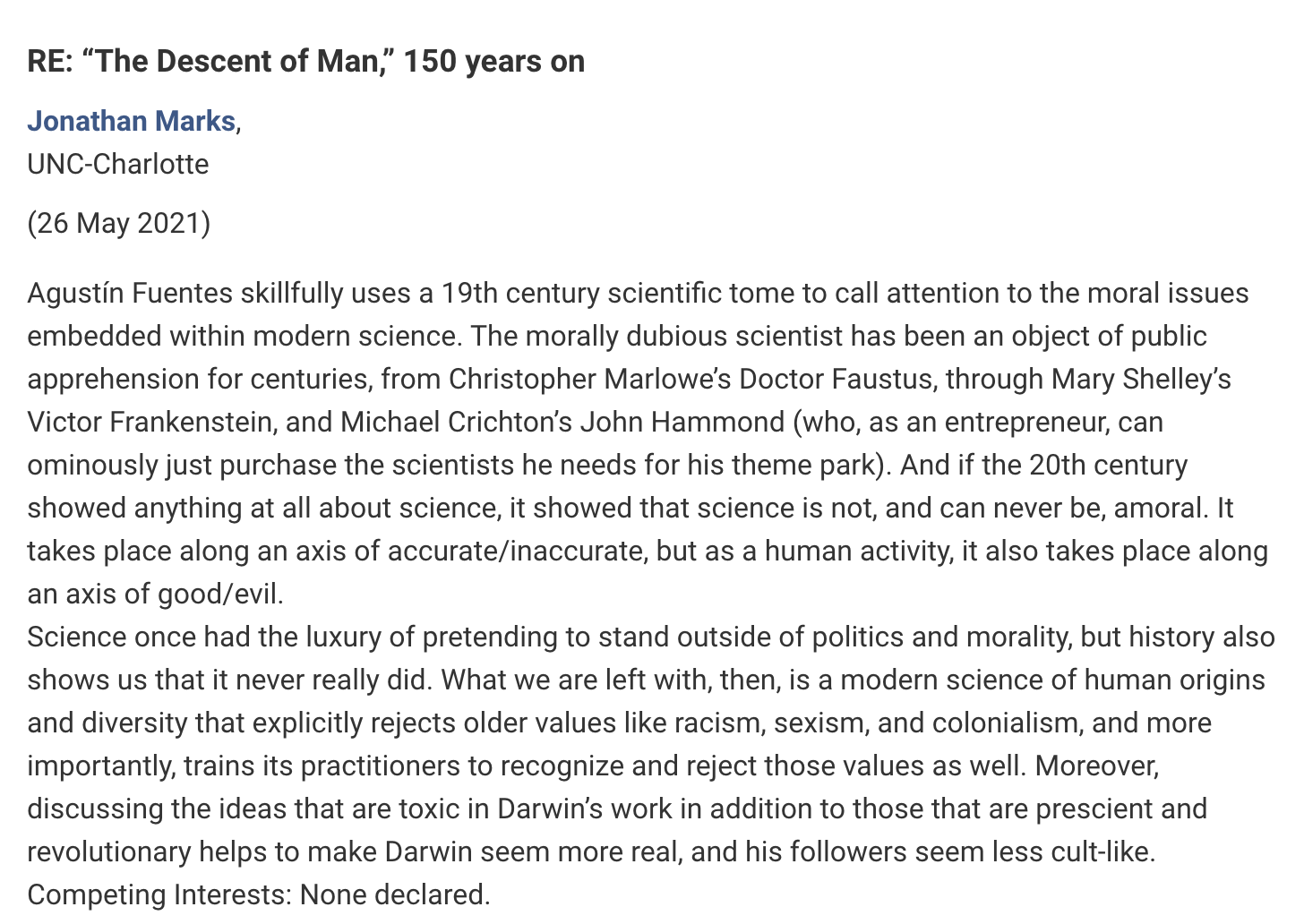 So, are genocide, white superiority, and misogyny really embedded within modern science? Nope. There may be some bigoted scientists, but in my experience they’re rare.

Is science amoral? Yes, but scientists themselves are not. Science is as amoral as is architecture and chemistry, but architects and chemists themselves created gas chambers, biological weapons, and horrible prisons. Let us indict the men who did those bad things, not science itself.

Does “the modern science of human origins and diversity explicitly reject older values like racism, sexism and colonialism”? No, that is part of the morality held by most scientists, but is not part of science itself.  Nor does the modern science of architecture reject racism and genocide.

Does science train its practitioners to recognize and reject those values? No, or at least it shouldn’t, though increasingly science departments get involved in social engineering.  Racism, sexism, and colonialism are moral views, though of course if some people claim that they are supported by scientific evidence, one can examine those claims. But such claims were rejected ages ago.  The few who hold them, like Jim Watson, are universally ostracized.

Does Darwin seem more real now? Not if you know anything about Darwin. He was a human being subject to the prejudices of his age, and not very deeply imbued with those prejudices. I keep wondering why people like Fuentes and Marks keep pointing out what we already know, but pointing it out in exaggerated and sometimes logically fallacious ways (see Wright).

But we know why: it is the Woke Era, and every “hero” must now be scrutinized closely for moral failings. In many cases we do learn unsavory stuff, and can do things like take down statues, but Darwin is not of that ilk. You’ll have to pry my copy of The Descent of Man out of my cold, dead hands.

As for science itself, it remains amoral: it is a set of tools for studying reality. Let us at least be sentient enough to recognize the difference between a toolkit and the carpenter who might use a wrench when he should be using a screwdriver.

15 thoughts on “One response to Agustín Fuentes’s Darwin-dissing”