Three days ago I highlighted a New York Times piece, “Once a bastion of free speech, the A.C.L.U. faces an identity crisis“. (This was a news report, not an op-ed.) It obviously hit home at the ACLU, because on the organization’s website their legal director, David Cole, has written a long piece defending the ACLU against the accusation that it’s undergoing mission creep by moving from defending civil liberties to engaging in social-justice work. 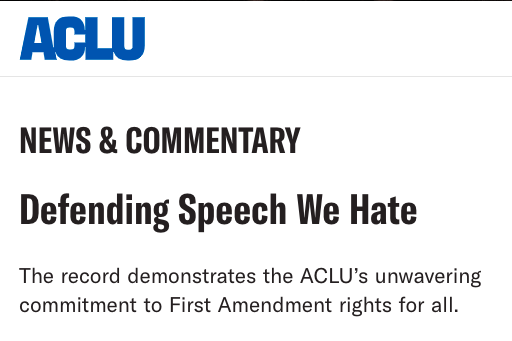 Cole argues strenuously, and gives examples, that the ACLU is still actively engaged in defending civil liberties—often of people or groups despised by the Left, including the NRA, Milo Yiannopoulos, Donald Trump, and so on. He gives a list of five years of civil-rights lawsuits that the ACLU has brought—from 2017 to 2021.

And, as I’ve said before, he’s got a point here: the ACLU is indeed continuing its mission. My point, and the New York Times’s was that it’s diluting its classic mission by engaging in social justice work, which isn’t in itself bad, but because some of that social justice work is not even-handed but one sided in terms of rights. Further, there are many other organizations doing social-justice work, but only the ACLU (and now the Foundation for Individual Rights in Education, or FIRE), has the resources and chops to defend the civil liberties of the despiséd.

In other words, the ACLU is doing what the Southern Poverty Law Center has done: taken its classic mission and, by branching off into questionable social justice activities (damning Maajid Nawaz and Ayaan Hirsi Ali for the SPLC), diluted not just its mission, but also its credibility.

I’ve written at length about the dubious stuff the ACLU is engaged in; and here’s a partial list of posts:

My beefs fall into four areas.

First, the ACLU is on the side of diluting the changes in Title IX made by Betsy DeVos to guarantee a fair hearing to college students accused of sexual misconduct. Nearly all these changes brought college hearings closer to court hearings, at least in terms of guaranteeing fairness. As I’ve said, these changes are one of the few positive things accomplished by the Trump administration, and the ACLU should have favored them. Instead, as you see in one piece below, they were characterized as “inappropriately favoring the accused.”  If you read the changes, I suspect you’ll agree that the ACLU should have been in favor of them, not opposed to them.

Third, in tweets by ACLU branches and attorneys, they have favored censorship of books like Abigail Schrier’s, and accused cops of murder who were, by all reasonable accounts, doing their jobs. How is this fulfilling their mission of extending civil rights to all? (Chase Strangio is the ACLU staff attorney in charges of transgender issues.)

The systems that allowed George Floyd to be murdered remain FULLY intact. Moments after we celebrated a win for police accountability in Minneapolis, news broke that @ColumbusPolice murdered a 15 year old Black girl. Her name was Ma'Khia Bryant. Say her name. #BlackLivesMatter pic.twitter.com/tufTaia9lR

Fourth, as I discussed in a post a while back, the ACLU circulated a document in samizdat that explicitly said that they now have to consider diluting their mission when defending speech involves defending “hate speech”. As I wrote at the time (my words are indented in regular type; the ACLU’s words are indented further and italicized):

The ACLU is committed to the fundamental rights to equality and justice embodied in the Fourteenth Amendment and civil rights laws. See Policies #301-332. We are determined to fight racism in all its forms, whether explicit or implicit, and the deep-rooted institutional biases that continue to reify inequality. We are also firmly committed to fighting bigotry and oppression against other marginalized groups, including women, immigrants, religious groups, LGBT individuals, Native Americans, and people with disabilities. Accordingly, we work to extend the protections embodied in the Bill of Rights to people who have traditionally been denied those rights. And the ACLU understands that speech that denigrates such groups can inflict serious harms and is intended to and often will impede progress toward equality.

Note that they now claim that speech that denigrates groups—including religion!—can “inflict serious harms” and “impede progress toward equality”. Here is the beginning of the slippery slope of “hate speech”. Is criticism of the Vatican, or the excesses of Islam, sufficiently harmful that the ACLU will not defend it? What about religionists who demonstrate for the right of bakers and others not to serve gays?

And remember when the ACLU defended the Klan when it wanted to march through the Jewish suburb of Skokie, Illinois? Well, no more.

We recognize that taking a position on one issue can affect our advocacy in other areas and create particular challenges for staff members engaged in that advocacy. For example, a decision by the ACLU to represent a white supremacist group may well undermine relationships with allies or coalition partners, create distrust with particular communities, necessitate the expenditure of resources to mitigate the impact of those harms, make it more difficult to recruit and retain a diverse staff and board across multiple dimensions, and in some circumstances, directly further an agenda that is antithetical to our mission and values and that may inflict harm on listeners.

Yes this document, which was leaked and is now publicly available, is characterized by Cole this way in his post of yesterday:

I led a committee representing a wide range of divergent views within the ACLU in developing guidelines for selecting cases where they present conflicts between values that the ACLU defends. We reaffirmed in that document that “As human rights, these rights extend to all, even to the most repugnant speakers — including white supremacists — and pursuant to ACLU policy, we will continue our longstanding practice of representing such groups in appropriate circumstances to prevent unlawful government censorship of speech.”

At the same time, we acknowledged the costs that can come with that representation, including to other interests and work of the organization, and outlined ways to address and mitigate the costs when we do decide to embark on that representation. That can mean making clear in public statements that we abhor the speakers’ views even as we defend their right to express them, supporting counter-protesters, and investing any attorneys’ fees we obtain in connection with the work to advance the views that the speaker opposed and that we support. Some saw even this document’s acknowledgment of the complexity of such work as an abandonment of principle, but we saw it as an honest effort to confront the challenge of being a multi-issue organization.

Read the document yourself, and see if you think that’s a fair summary. Their “mitigation of costs” completely ignores the implication in the document that they might reject cases that they’d normally take because it involves hate speech that can cause “harm”.

At any rate, there’s also been negative reaction from other quarters to what I saw as a fair report in the NYT (see this piece in The New Republic).  The TNR piece is misguided in the same way the ACLU’s mission creep is misguided: they do not prioritize free speech over hate speech.  You cannot pretend that free speech will never be construed as “hate speech”—it’s nearly always seen that way by the speech opponents.

But thank Ceiling Cat for organizations like FIRE whose principle of promulgating free speech in higher education has not been diluted.

16 thoughts on “The ACLU unconvincingly denies accusations of “mission creep””