I don’t think anyone reading or commenting on this site would deny a transgender person the right to be considered whatever sex they want; the rub comes when that consideration conflicts with other considerations of justice—as in sports. As I reported in June of last year, two transgender women in Connecticut—women who were born biological males and apparently had neither surgery nor hormone therapy for their transition—decided to compete with other women in track meets. Terry Miller and Andraya Yearwood cleaned up in the women’s 100- and 200-meter dashes in Connecticut, as expected given that they have the musculature of men. They were allowed to compete in this race because Connecticut law says that you are whatever gender you say you are. And that law, which does (and should) apply to most areas of civil rights, is also taken to apply to sports. If you’re a biological male and feel you’re a woman (and I’m not arguing that these athletes feel they have a woman’s identity), then you can compete against other women, without qualifications.

In contrast, the Olympics and other organizations mandate that you have a certain titer of testosterone below which you must remain to compete in women’s events. In other words, biological men who want to compete with women have to undergo hormone replacement therapy (HRT). I’ve written about this, too, as it’s not a perfect solution to the problem. If you start HRT after you’ve already developed the musculature and bone structure of a biological male, and then transition to female, you don’t lose all that bone and muscle. It seems clear that this gives many transgender women a leg up in women’s sports.

This seems to be the case for the weightlifter Laurel Hubbard, who, competing for New Zealand, transitioned from male to female in her thirties, and then won two golds and a silver in three women’s heavyweight categories at the Pacific Games in Samoa in early July. (I believe she’s undergone HRT.) There were objections from other weightlifters and Samoans (they had their own local favorite), just as Connecticut non-transgender women who compete in track and field have begun to object to what seems a palpably unfair way to interpret “women” when it comes to high school athletics. (Three of those women have filed a federal anti-discrimination lawsuit against Connecticut, claiming that the state’s policy denies them the opportunity to get college scholarships that come from winning races.)

While the Connecticut law is risible, the problem of how to deal with transgender women who want to compete along with biological women isn’t much easier when it comes to athletes practicing HRT.  As Reuters reports (link above):

IOC guidelines issued in 2015 said any transgender athlete could compete as a woman provided their testosterone levels are below 10 nanomoles per liter for at least 12 months prior to their first competition.

That has been criticized by some scientists, who say it does little to mitigate natural biological advantages enjoyed by male-born athletes, including bone and muscle density.

Researchers at the Dunedin-based University of Otago said in a peer-reviewed study published earlier this month that the IOC guidelines were “poorly drawn” and the mandated testosterone level was still “significantly higher” than that of women.

The study advocated that the IOC ditch its “binary” approach to competition and consider introducing a transgender category or find another solution that balances the desire for inclusion with the need for a level playing field.

I was disappointed, then, to see the kneejerk reaction of the American Civil Liberties Union (ACLU) to the situation in Connecticut, as they issued the following statement below (click on screenshot), which I’ve reproduced below the picture: 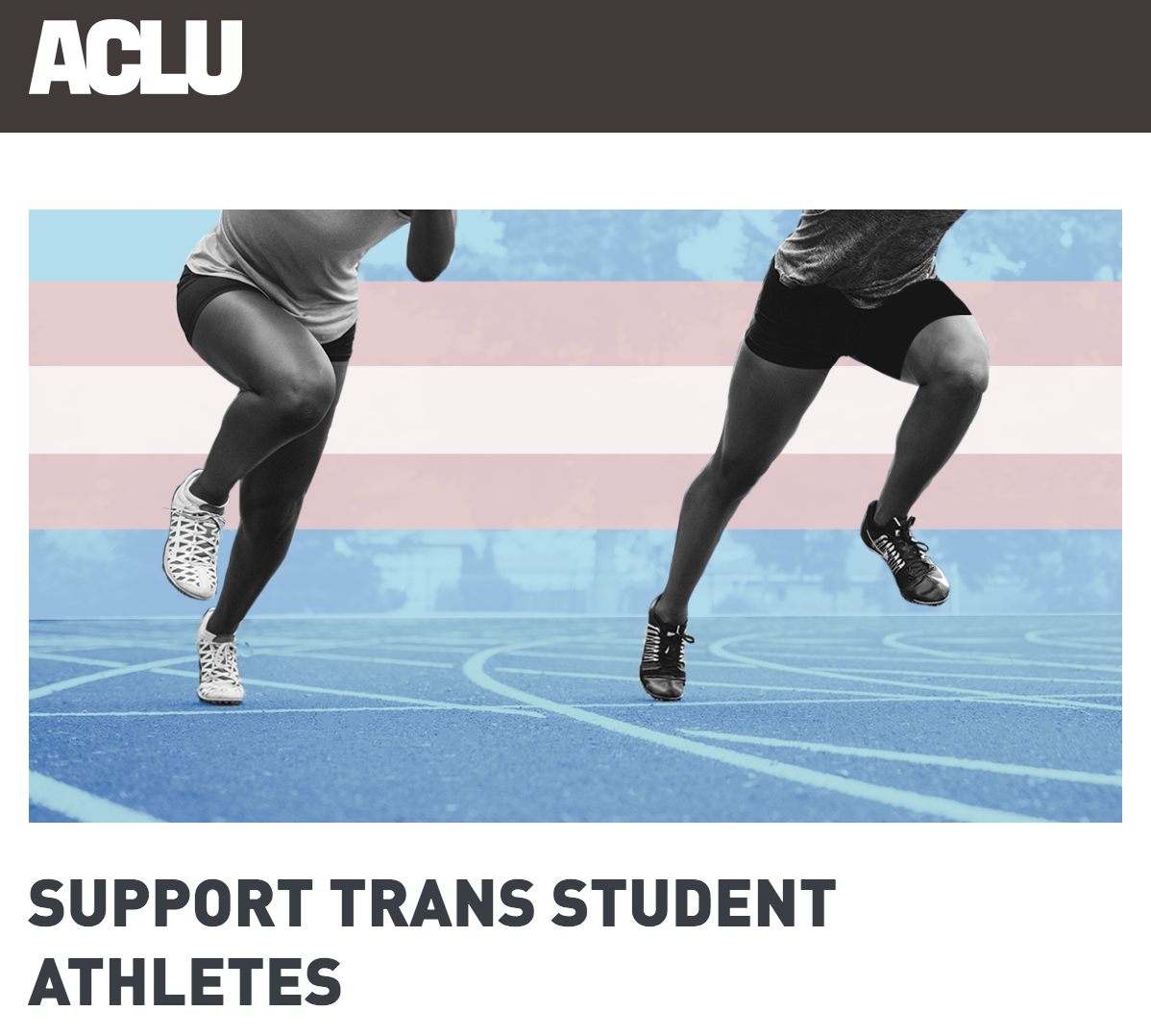 Here is the text; the bolding is the ACLU’s.

Terry Miller and Andraya Yearwood are two transgender girls who are following their dreams as star runners in Connecticut. But as champions on the track, they face harmful attacks rather than the accolades they deserve. While Andraya and Terry’s teammates and coaches support them, some cisgender athletes want to keep them out of girls’ sports.

Transgender people have the right to participate in sports consistent with who they are, just like anyone. Denying this right is pure discrimination.

The marginalization of trans student-athletes is rooted in the same kind of gender discrimination and stereotyping that has held back cisgender women athletes. Transgender girls are often told that they are not girls (and conversely transgender boys are told they are not really boys) based on inaccurate stereotypes about biology, athleticism, and gender. As a result, transgender athletes – particularly Black transgender women – face systemic barriers to participation in athletics and all aspects of public life. This exclusion contributes to the high rates of homelessness, suicidality and violence that Black trans women and girls face.

There’s a word for that: Discrimination.

When misinformation about biology and gender is used to bar transgender girls from sports it amounts to the same form of sex discrimination that has long been prohibited under Title IX, a law that protects all students – including trans people – on the basis of sex.

Girls who are transgender are girls. Period.

This is remarkably obtuse for the ACLU.  The whole issue is couched in terms of discrimination and stereotyping, and uses the world “girls” just as Connecticut does: you’re a girl if you say or think you’re a girl. Period. They completely evade the issue of an unfair physical advantage of transgender athletes—particularly ones who are wholly male in terms of their bodies—over biological women, and the consequences to those women. Nobody is arguing that we should discriminate against transgender people in terms of their civil rights. But is it really a civil right to be allowed to compete in a women’s sport simply by declaring you’re a woman? The women athletes who lost to Miller and Yearwood don’t seem to think so.

As has happened several times in the past few years, the ACLU, like the Southern Poverty Law Center, seems to be expanding its brief from civil liberties to social justice. That’s not necessarily bad, but it is when you do what the ACLU is doing here (it’s also backed off on its hard free-speech stand, something that also disturbs me).

I have no solution to the problem of what to do about male-to-female transgender athletes who want to compete in women’s events. As I’ve said before, there are many questions to resolve, which include these that I’ve raised before:

And of course the biggest question of all: