Today we have a contribution from physicist and origami master Robert Lang, presenting some photos called “Altadena: Squirrel Noms Edition” (Altadena, California is where he lives). His captions and descriptions are indented, and you can enlarge the photos by clicking on them:

Most of these photos were taken from my office out the window above my desk.
Naturally we need to start with a kitty. Our first pic is a Bobcat (Lynx rufus), a species I get regular visitation from, though more often at night than daytime. As you can see here, the meadow outside my studio is starting to come back to life, which brings out the ground squirrels and rabbits that keep the bobcats coming. 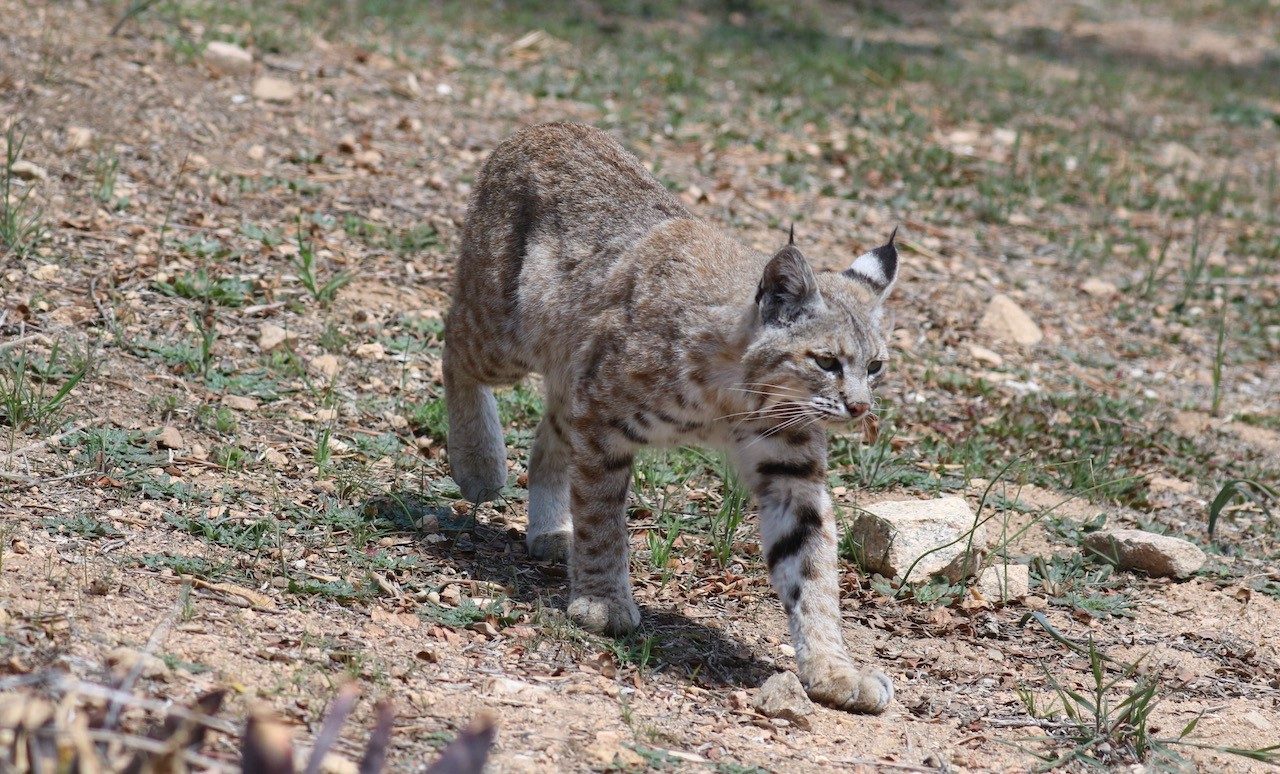 I live and work in Altadena, on the northern boundary of the freeway-and-housing metropolis of Los Angeles. Because the mountains rise so abruptly, the boundary between civilization and wilderness is pretty sharp, and so we get a lot of wildlife along the edges, both big and small. The Western Fence Lizard (Sceloporus occidentalis) is one of the smaller ones. 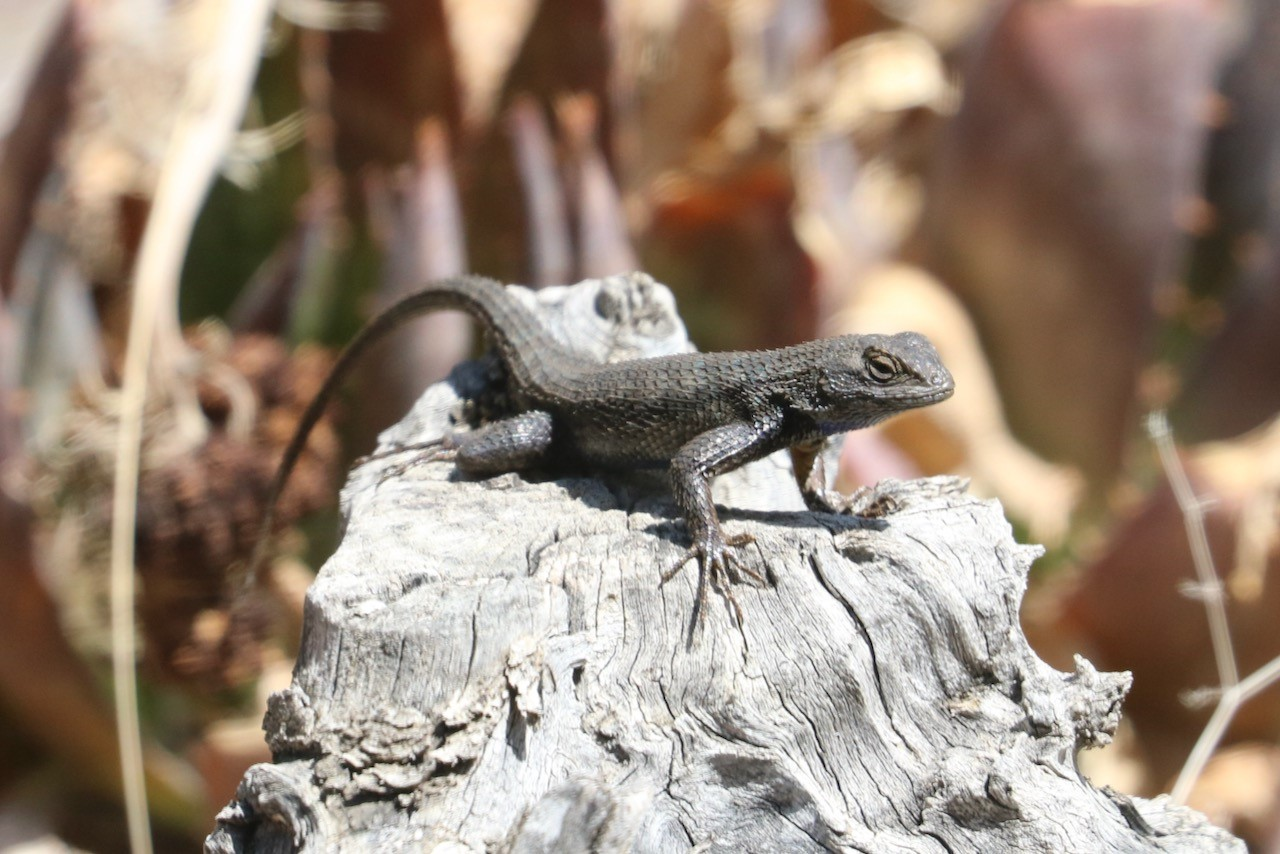 One of my favorite visitors is the Acorn Woodpecker (Melanerpes formicivorus). They’re distinctive and chatty, and the locals seem to have forgiven me for letting Edison replace the old telephone pole last year that had become on of their granaries over the years. 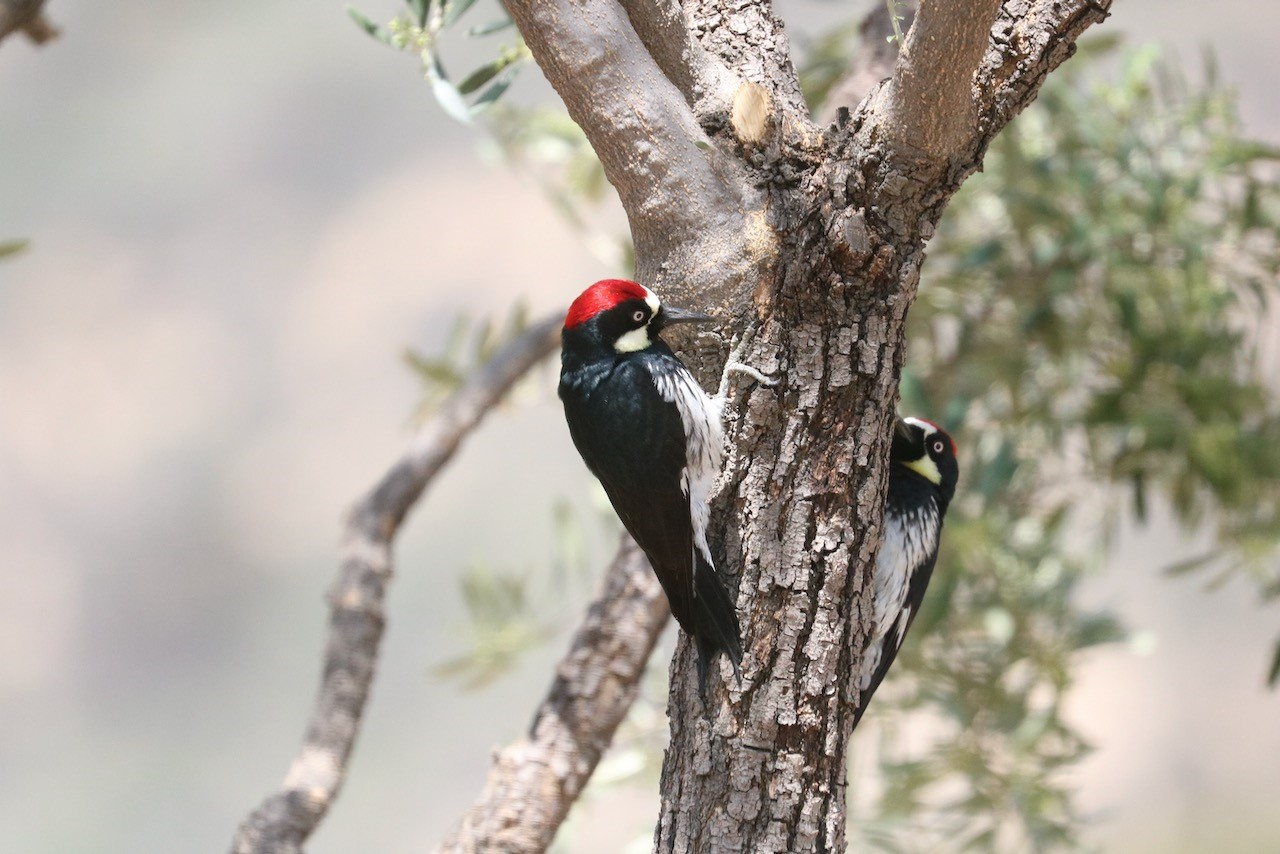 I rarely see the Gray Fox (Urocyon cinereoargenteus) during the day, but one is a common nighttime visitor who gets snapped by an IR camera I have set. Here’s video.

The Western Gray Squirrels (Sciurus griseus) regularly come down from the trees to root around for seeds and such. This time of year, there’s lots of empty acorn caps, but not many acorns left (last year was a bumper crop). 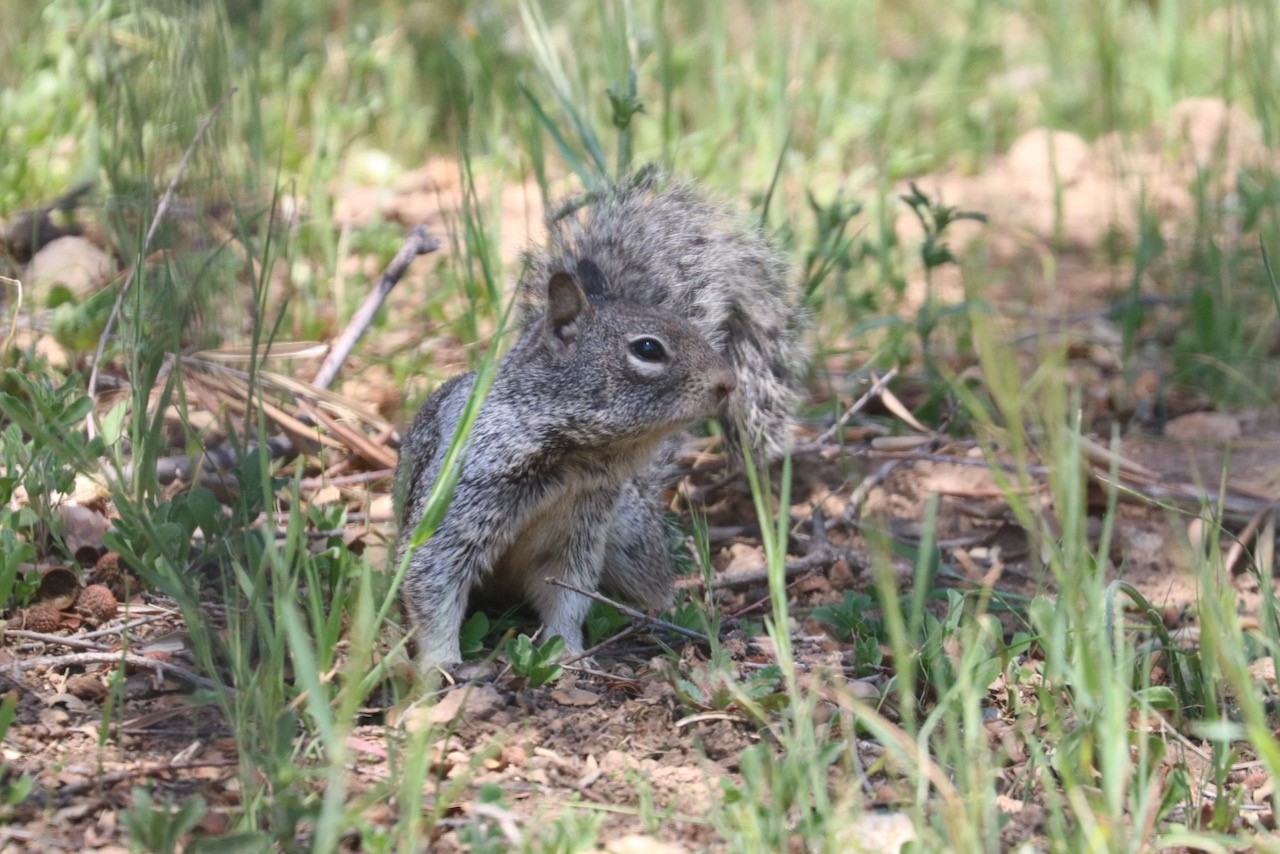 A different kind of squirrel is the California Ground Squirrel (Otospermophilus beecheyi), which, though superficially similar to the grays can be distinguished by a tinge of brown and speckling in the fur and a not nearly as fluffy tail. (As the name suggests, they live in burrows, not trees.) This morning I saw a behavior I’ve never seen before: one was climbing around on a patch of Prickly Pear Cactus (Opuntia sp.), which must have hurt! Or else he climbed very carefully. 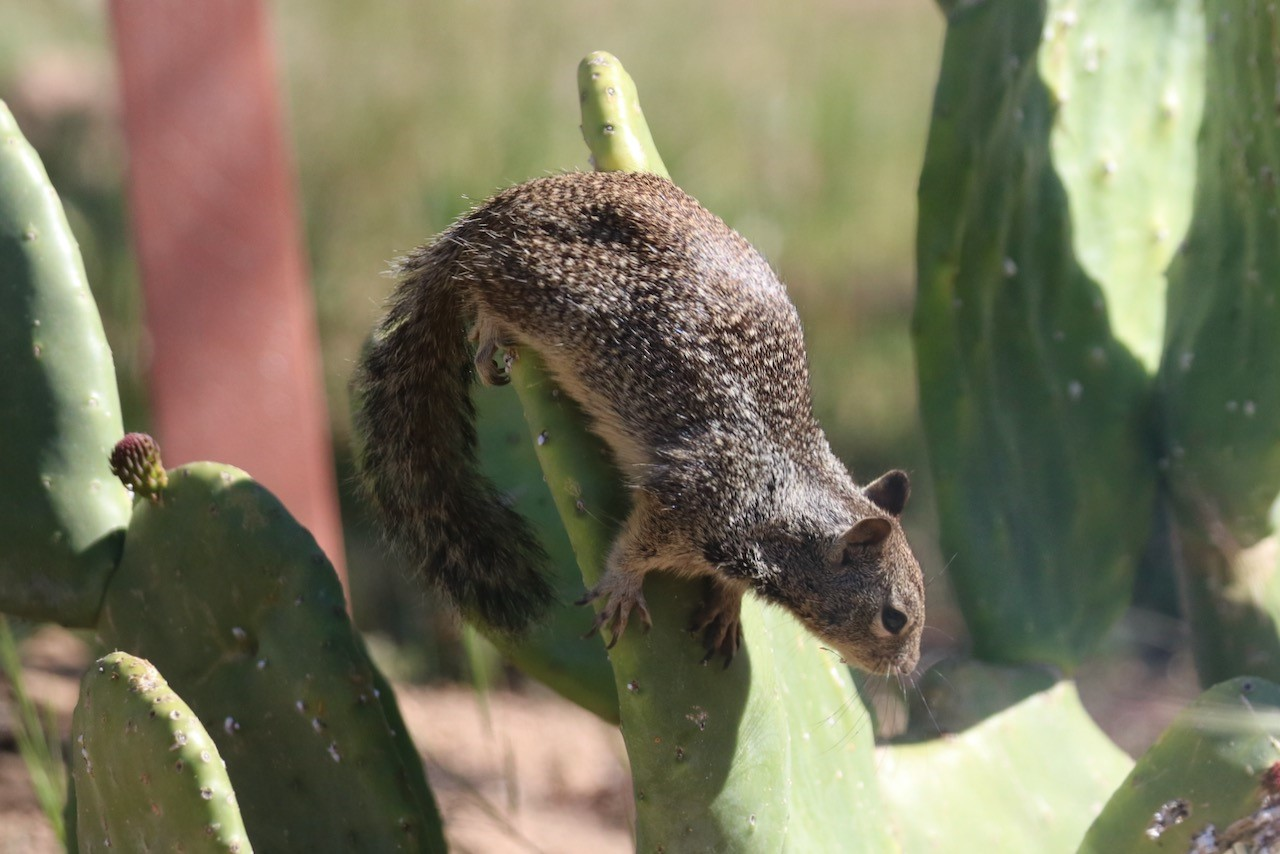 What could be so attractive to induce one to brave the glochids (the short, incredibly nasty little spines that grow in the areoles)? Turns out he was eating the cochineal insects (Dactylopius coccus)—which produce and live under the white, waxy tufts that you see around the areoles. 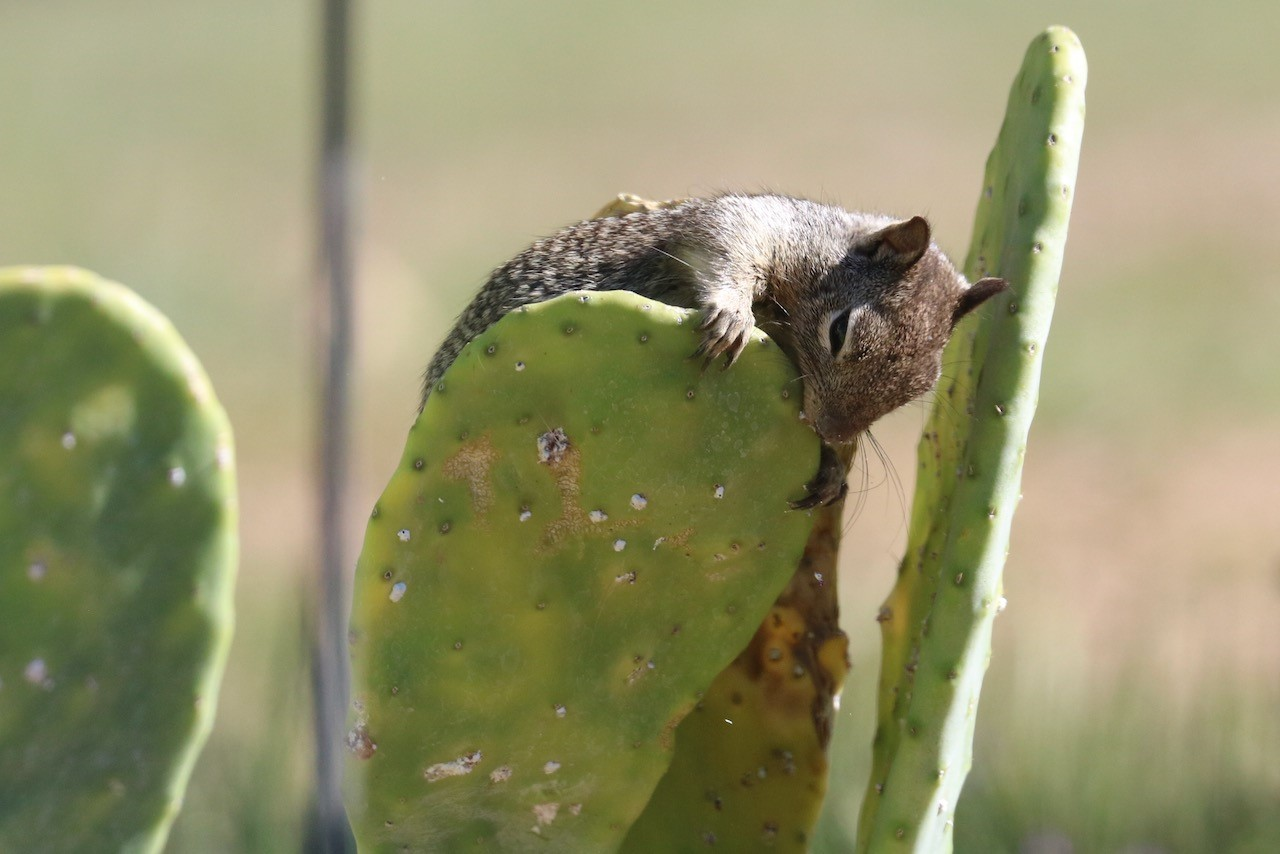 He went from pad to pad, cleaning them off. I’d never known that squirrels were cochineal predators, but this explained why they slowly disappeared from the cactus over the summer. I’m sure the cactus appreciated the squirrels’ cleanings.
In this last photo, you can see some of the waxy tufts around the squirrel’s mouth and I think I see one of the cochineal insects stuck on the end of a whisker—they’re tiny dark red dots (and are the source of Red Dye #4, also know as carmine, and commonly used in foods and cosmetics).
In this last photo, he has his eyes closed, and I see him as savoring the flavor of this delicacy that made it worth the trip and the spines. (I imagine Jerry having the same expression after a particularly juicy slab of brisket.) 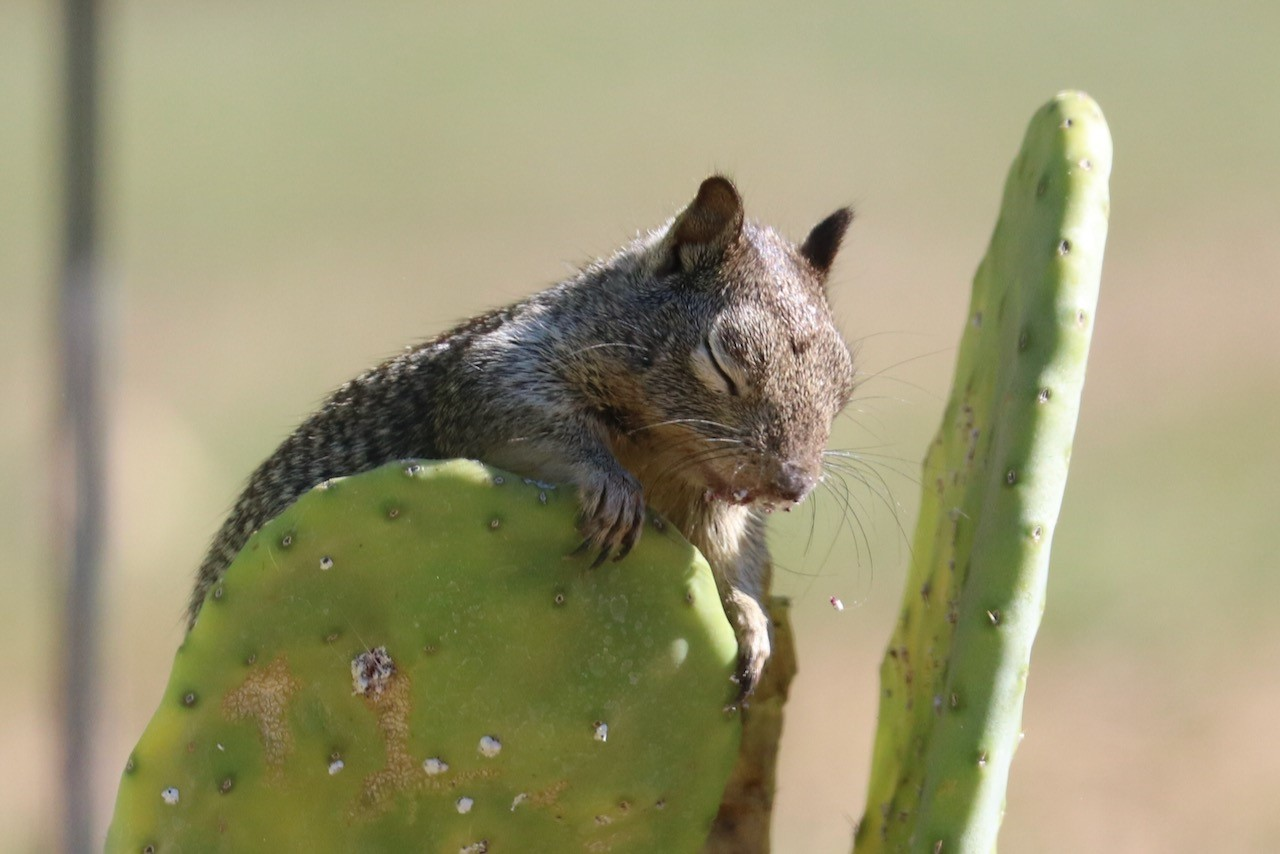