It seems that in the last three months we’ve veered between the xenophobic and inhumane immigration policies of Trump (“we’re gonna build a wall, and let Mexico pay for it”) and the more humane attitude towards immigration of the Biden administration, but with a policy so nebulous that, to me, it often seems to approach “open borders.”  And I’ve haven’t heard either Biden or prominent Democrats admit that there’s a crisis at our southern border (one in which unaccompanied children are sent across), or that it’s motivated by the change in administrations, with immigrants expecting an easier go of it under Biden, or even say that we need some legislation or executive action pronto.

In his Weekly Dish column (click on screenshot below if you subscribe), Sullivan takes the Dems to task for what, to him, is cluelessness about immigration. 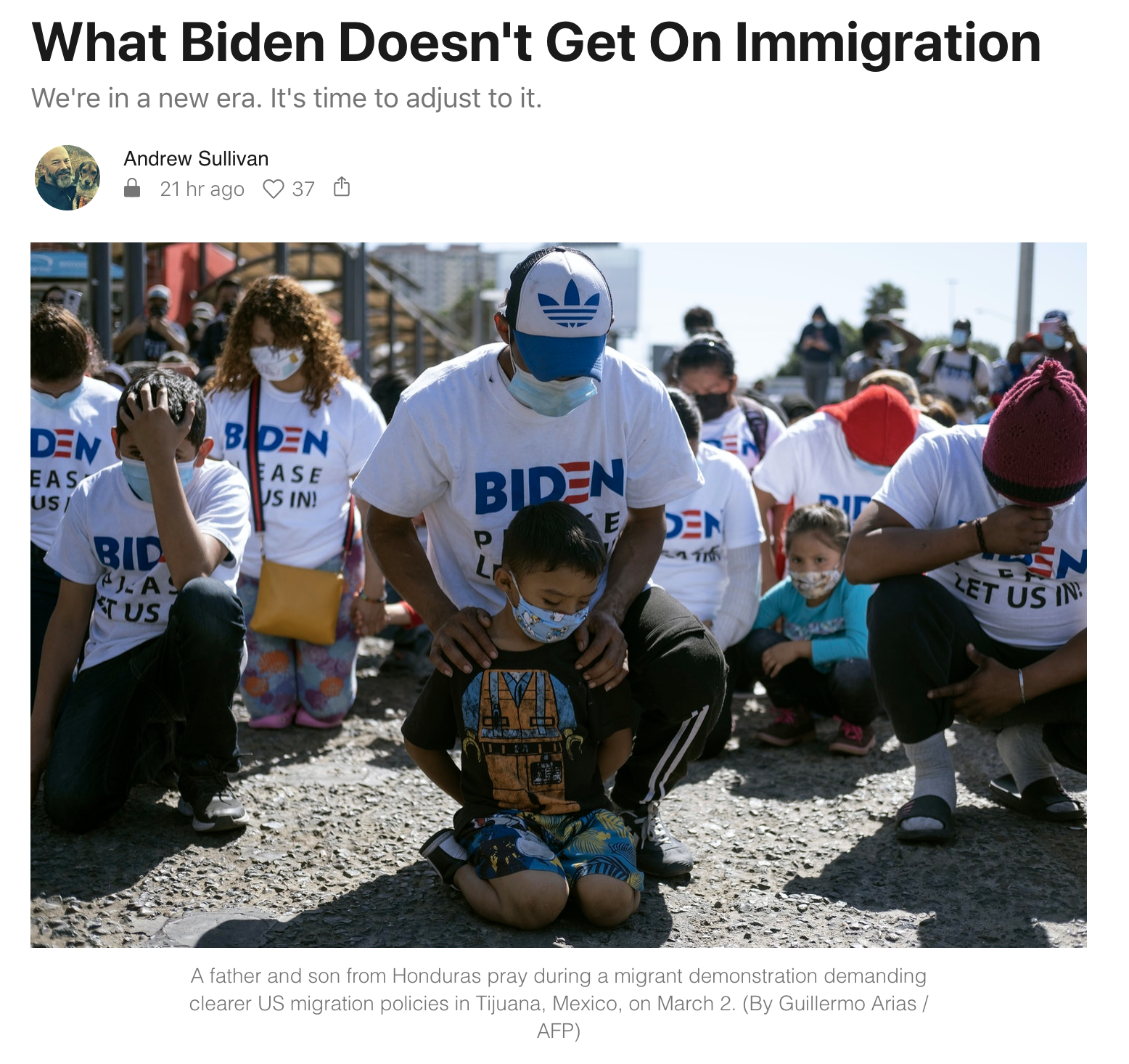 According to Sullivan, what is it about immigration that the Democrats don’t get—or, perhaps, refuse to admit? First, that there’s a sudden influx of people at our southern borders obviously connected to the change in Presidents. Second, as Sullivan says, “Call this what it is: not a surge in asylum cases, but a big jump in economic migration.” It’s much easier, of course, to get legal entry as a refugee than as someone seeking a better life in the U.S. Not that the latter motive isn’t a good one—America’s been immensely enriched by those who came here seeking political and economic freedom—but unless we want open borders, we’ll have to make some rules.  Children are sequestered in “pods” at grim facilities in Texas, often held long beyond the 72-hour limit. A little girl drowned yesterday trying to get across the Rio Grande. And yet, from Biden, crickets, or, in his press conference this week, dissimulation:

The rhetoric from the Biden peeps contains very little emphasis on the core moral duty of government to have secure borders. Biden seems to want them all to come, and to make it easier rather than harder to immigrate — even as the foreign born population in the US is near a historic peak, even as domestic wages have been stagnant, and even as the economy has much less use for unskilled labor than at any previous point in history. [JAC: I think there are counterarguments against the “too much unskilled labor” argument, but I can’t recall them.]

The president also told some whoppers in his presser to deflect from these realities. He said that his administration is sending everyone back who isn’t a minor. But last week, only 13 percent of illegal immigrant families were sent back, so 87 percent were let in. A significant number were also admitted without even a gesture at processing them legally.

The president said that the numbers of unaccompanied children arriving were not much different than the numbers a year ago under Trump. Also false: “The number of unaccompanied children encountered on the border rose by 61% between January and February 2021, not the 28% Biden claimed — double the increase between January and February 2019.”

He said that the Trump administration sent kids back into the desert, and allowed them to starve to death. Another falsehood: “The Trump administration either flew back migrants to their home countries directly or handed them over to Mexican authorities to do the same.” In response to a question from ABC News, Biden even inadvertently defended this Trump policy — which he had just also denounced.

In all this, it’s worth keeping in mind that even those legally allowed in with a court date almost never return to their native land, even if they show up in court, and lose their case. Around 2 – 3 percent of all the illegal immigrants in the US are deported each year. Once they’re here, the vast majority are here for good. And if the current administration is any guide, they will be granted a mass amnesty at some point in the future.

But when you read much of the mainstream press, the entire emphasis is on how racist immigration enforcement inherently is, how cruel it is to prevent anyone from immigrating, how the US is ultimately responsible for the shitty governance in much of central America, how we need to abolish or defund ICE, and how we should focus mainly on how to admit as many people as humanely and as quickly as possible. And as this message percolates, not only does it encourage ever more illegal immigration, and ever more human suffering, it freaks out voters of all races and parties who begin to sense (rightly in my view) a de facto open borders policy.

And yes, I’ve sensed that too.

We have two choices: open borders, which I think everyone knows wouldn’t be optimal, or some form of immigration control. What Biden and the Dems seem to be doing is enacting the former while pretending to be effecting the latter.  I’m no expert, but one way forward is to decide how many people the U.S. can absorb yearly, and then prioritize entry based on things like need (including fleeing from fear of murder or terror), skills (or should we even consider skills?), and presence of family in the U.S.

‘Yes, this involves ethical decisions, but Americans are asking the Dems to put something in place, and if we don’t want losses in the midterm elections, Uncle Joe had best do what he promised.

49 thoughts on “What immigration policy do Democrats want, if any?”