This has been in the air for some time: after a few years of pondering, Harvard has rendered its judgment on evolutionary biologist Martin Nowak for his connections to Jeffrey Epstein.  I haven’t been a fan of Nowak, particularly his work with Ed Wilson and Corina Tarnita on group selection, but I don’t take any joy in a well known and highly productive biologist—even if some of the product was dubious—meeting his downfall. The gist of it is reported in this new Guardian article (click on screenshot): 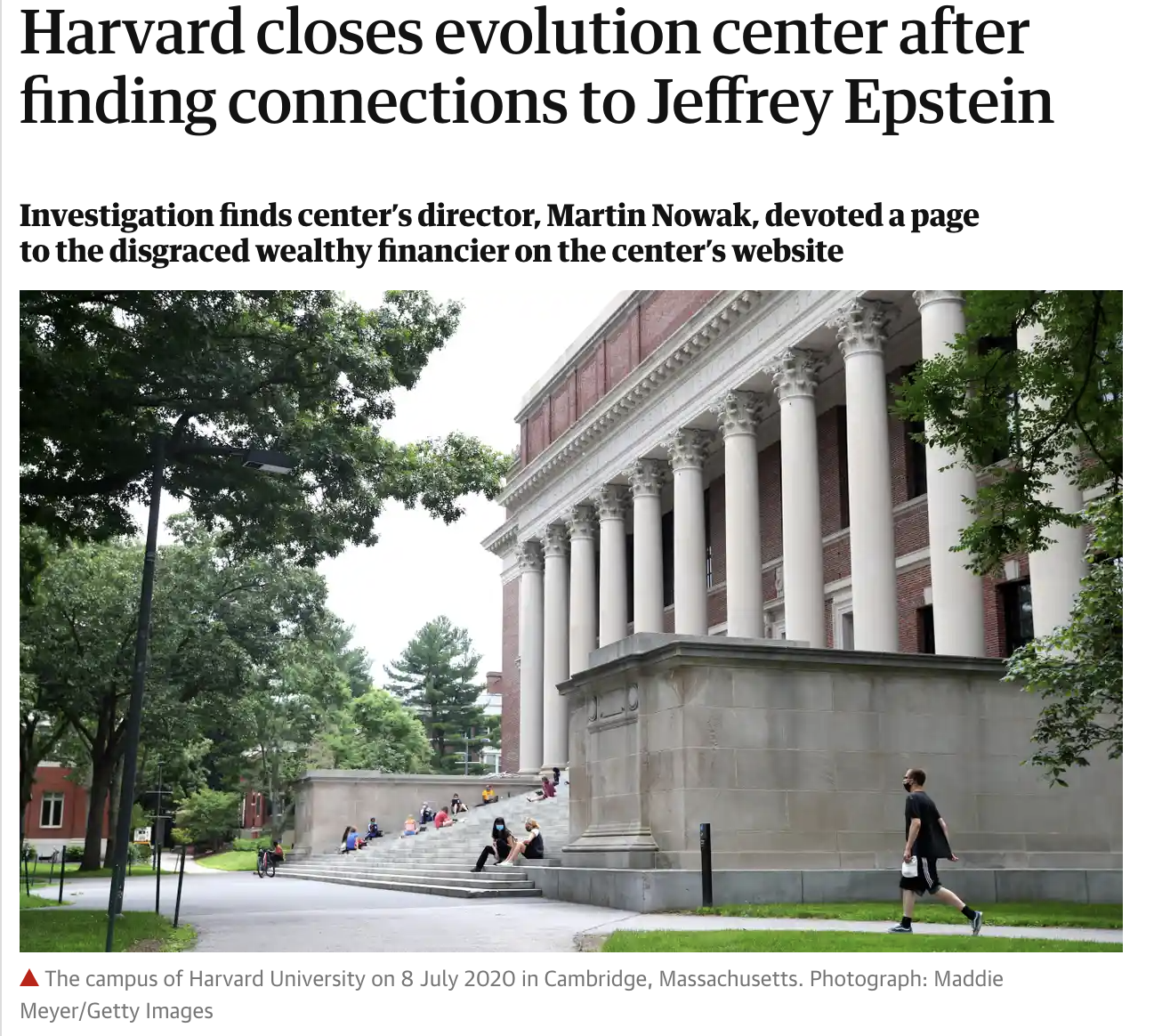 The only thing I guessed wrong was in thinking that Harvard would fire Nowak. They didn’t. What happened to him, however, is nearly as bad:

Harvard University’s program for evolutionary dynamics is to close after an inquiry into ties between its director, Martin Nowak, and sex offender Jeffrey Epstein.

According to the university, the mathematics and biology professor violated several university policies through his contacts with Epstein, including giving the disgraced wealthy financier an office on campus which he visited more than 40 times between 2010 and 2018.

Epstein, 66, was charged with sex trafficking in 2019, shortly before he was found dead in his cell in the Metropolitan correctional center in New York. Epstein had faced an indictment accusing him of running a sex-trafficking ring of underage girls, some as young as 14.

Nowak will be barred from starting new research or advising students for at least two years, according to the university. The sanctions come almost a year after Novak was suspended following a university review that found he had extensive, previously unreported contact with Epstein. [JAC: Nowak was suspended on paid leave.]

The review of Nowak’s connections to Epstein found that the professor had facilitated Epstein’s efforts to use ties to the prestigious university Harvard as a tool to rehabilitate his image.

The review also found that Nowak devoted a page to Epstein on the center’s website that included links to the financier’s websites. The university received $9.1m in gifts from Epstein, including a donation of $6.5m to the evolutionary dynamics faculty in 2006.

According to the Harvard Crimson, the University took over $9 million from Epstein, but didn’t take any more money after his conviction for sex offenses in 2008 (Epstein committed suicide in jail while being held on a more severe set of charges). And Harvard did donate an unspent $200,000 of Epstein’s gift to victims of sex trafficking and sexual abuse. But Nowak continued to give Epstein perks, though who knows if that was to “rehabilitate his image.”

After conviction, Epstein remained a visiting fellow of Nowak’s Program in Evolutionary Dynamics (PED), had a visitor’s office and a key card, and visited the office over 40 times before he was taken into custody again. He also participated in several PED events. Given that Epstein had no credentials in the field, and his favor was being curried because of his enormous wealth and the perks that came with knowing him, this was deemed a violation of Harvard’s policies.  And there was this, which seems to me quite serious:

[The Harvard review] cites an incident in which Nowak falsely informed a grant-making foundation that matching funds for a PED grant came from a foundation run by Epstein, suggesting that Harvard report the incident to FAS’s Faculty Affairs Office.

Did Nowak know of Epstein’s conviction for sexual trafficking in 2008 (he was convicted of procuring a woman under 18 for prostitution)? I can’t imagine he didn’t, as it was public information.  So, at the very least, Nowak is guilty of spectacular misjudgment: giving a convicted sex offender without credentials in biology a position with his biology institute. I doubt that the same punishment would have been handed out had the recipient of Nowak’s largesse been a nonspecialist who hadn’t been convicted of sex crimes.

But this is not mine to reason why. All I know is that Harvard will be very careful in vetting its visiting fellow in the future! And I’m pretty sure that Nowak, who has a worldwide reputation in evolutionary biology, will find a job somewhere else, as I can’t imagine that he’d want to stay at Harvard.