Rachel and Jun are a couple living in Japan: he’s Japanese and she’s American, and they each post videos. They own three cats and Jun is an accomplished cook. When Jun makes meals, he allows his cats to watch and sniff the ingredients (they’re very patient). On occasion he makes special meals for the moggies, as he does here, and they’re prepared with as much care as with the meals he makes for himself and Rachel. Here’s Jun’s YouTube notes.

I tried to make a traditional-style Japanese meal for my cats! It’s a set menu (miso soup, rice with furikake, and fish) except the food is all made out of cat-safe ingredients.

Look at those fancy cat meals! And they licked their plates clean!

From Canada’s National Post we hear of an unnamed Devil Cat who is terrorizing a neighborhood in Ottawa (click on screenshot): 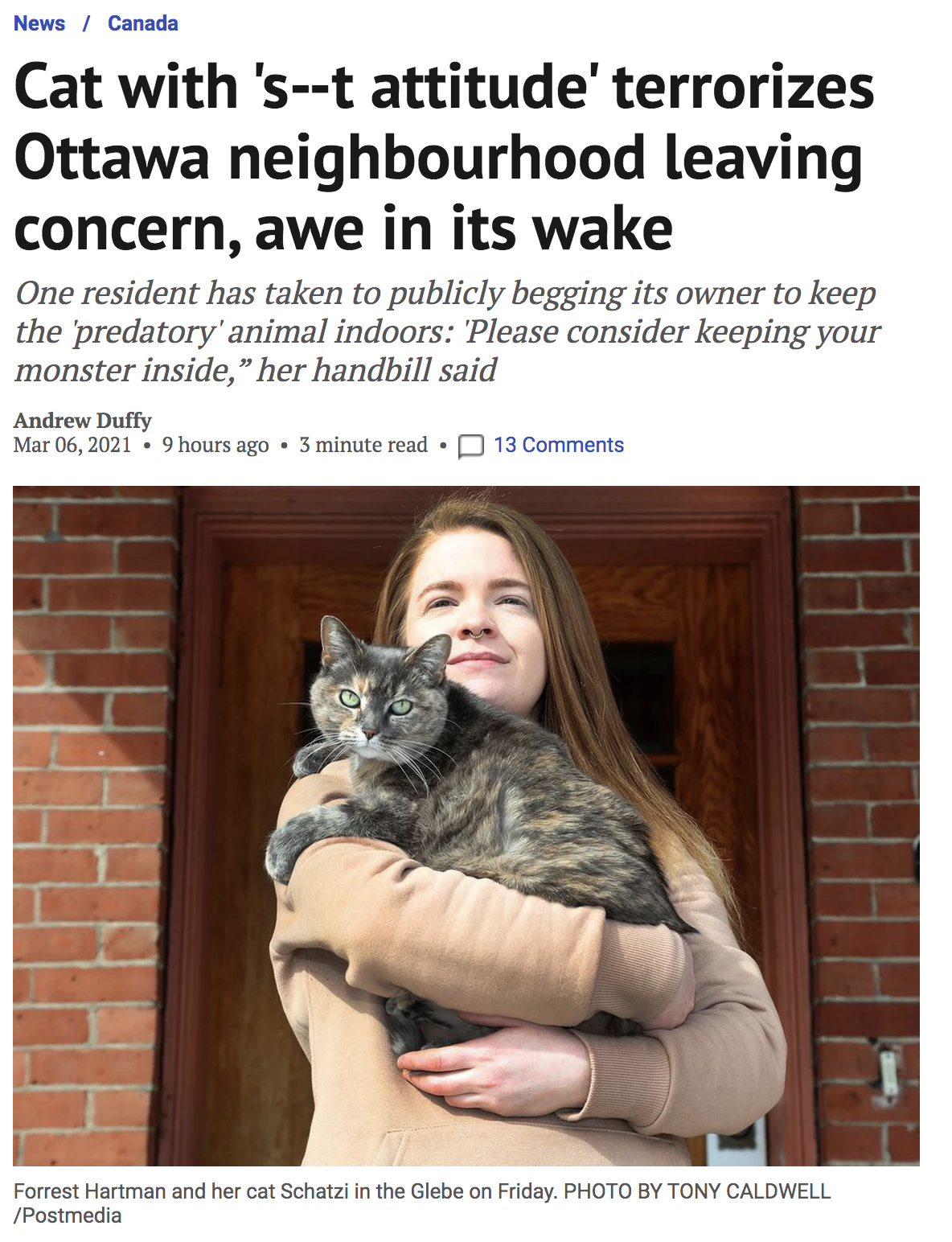 A cat with a bad attitude is raising hackles in the Glebe where one resident has taken to publicly begging its owner to keep the “predatory” animal indoors.

Forrest Hartman, 30, posted handbills along Powell Avenue that asked of her neighbours: “Do you own a stocky grey cat with a blue tag and a s–t attitude?”

“Please consider keeping your monster inside,” the handbill continued. “Your cat has attacked my cat at least a dozen times on my property.”

The public cat shaming was necessary, Hartman said Friday, because she didn’t dare try to read the cat’s collar tag to find its owner.

Hartman has lived in a ground-floor apartment on Powell Avenue for two years with her fiancé and their two cats, Schatzi and Yuri. For the past year, she said, the feline she knows as “angry satan cat” has been menacing six-year-old Schatzi — it means “sweetheart” in German — who likes to lounge on the property’s front and back porches.”

Here’s the “angry cat”. Note that he has a collar, so he’s not feral: 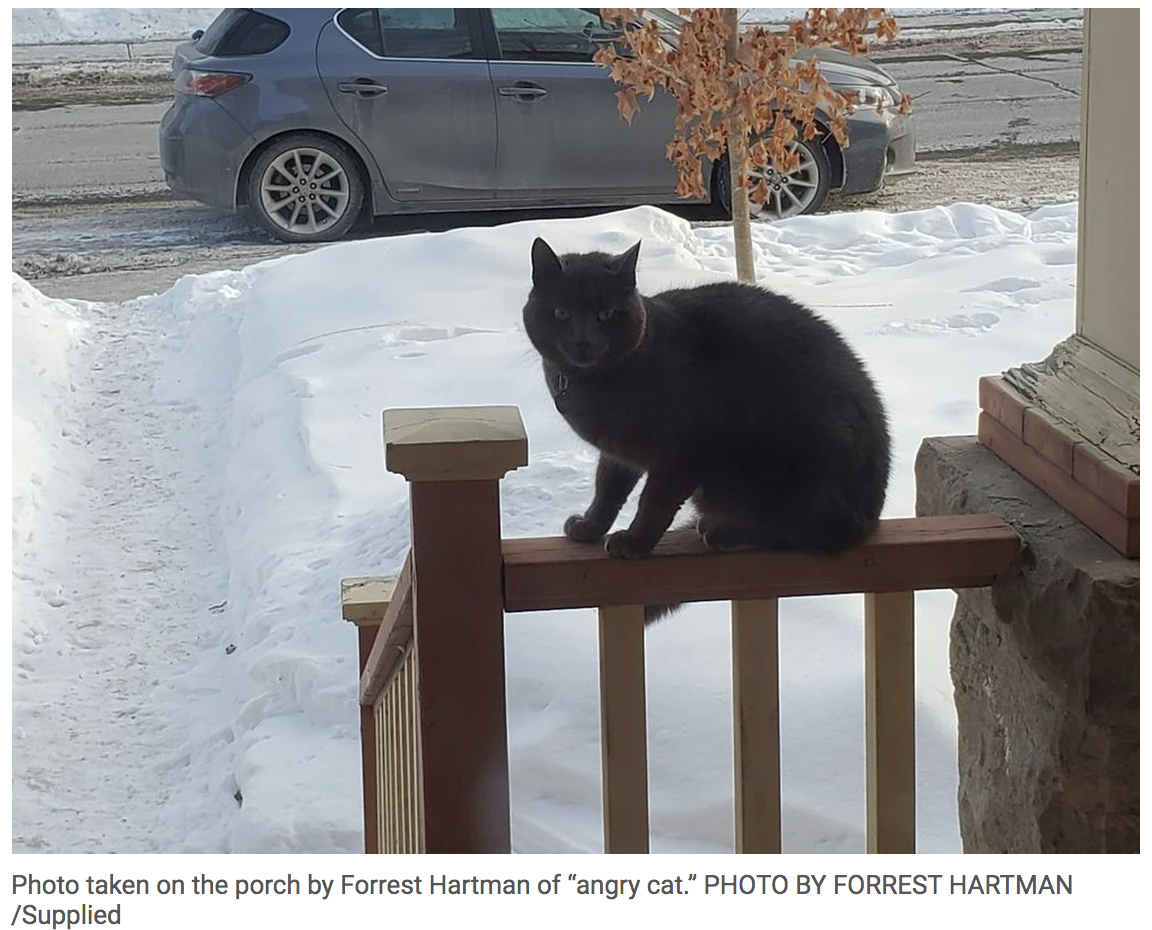 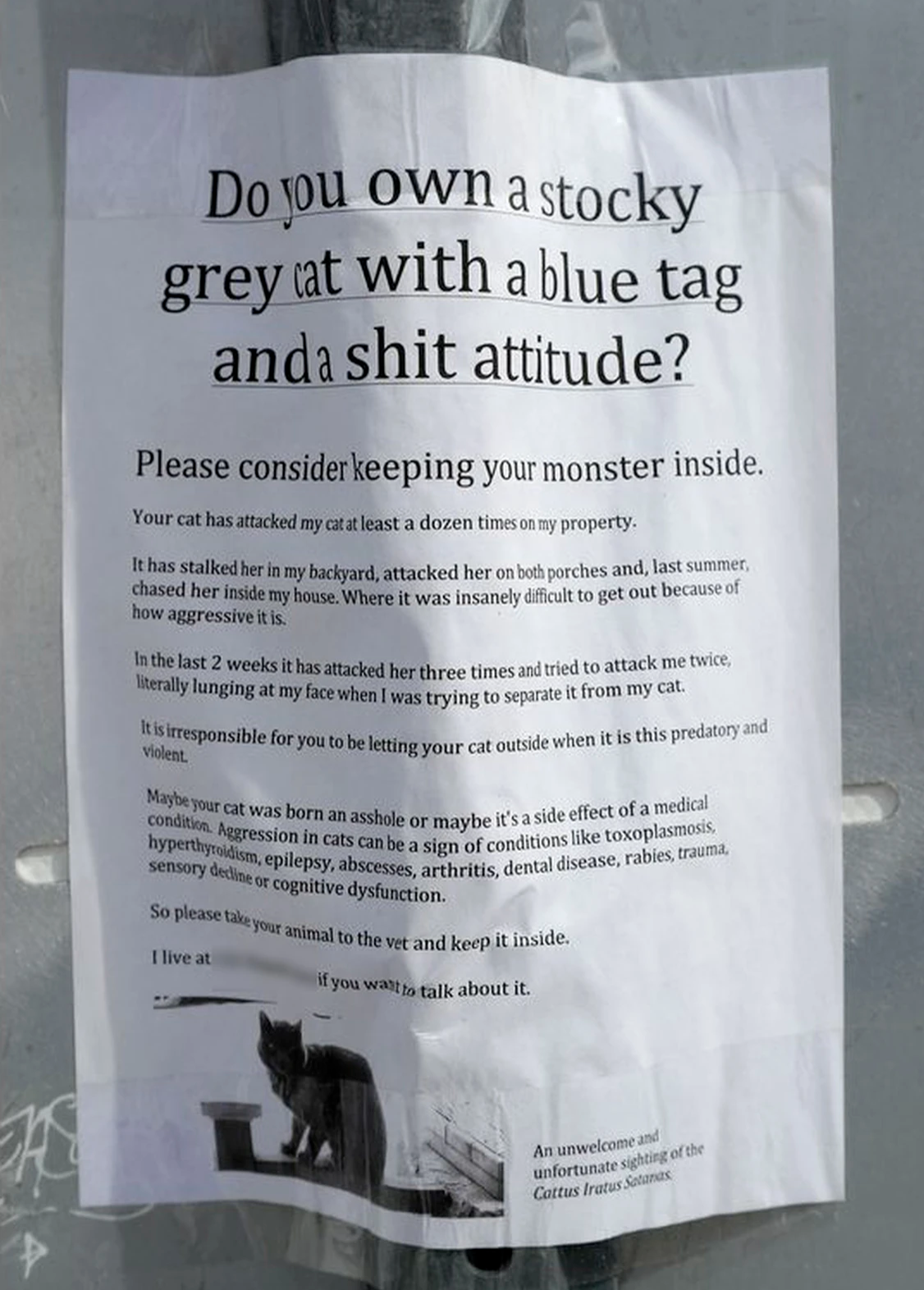 Michael Slavitch, a dog owner who lives on Renfrew, said he often sees the cat in question. He defended its character: “He’s just a big old tomcat that’s territorial,” Slavitch said. “If he knows you, especially if you’re a 15-year-old girl, he’ll flop on the sidewalk and put his belly up in the air.”

Last summer, Slavitch noted, he did see the cat running down the street with a dead least weasel in its mouth, and he has seen it chase dogs that try to be aggressive around it. “He’s the neighbourhood zero f—s cat,” he said. “It’s actually a pretty cool cat.”

Another local dog owner, lawyer Shane Zurbrigg, said angry cat has menaced his dog, a German shepherd-Labrador retriever mix, and was not the least bit intimidated by the dog’s size. It weighs more than 100 pounds.

“This cat has chased after us,” Zurbrigg said. “I’m in the mood to run away but my dog is like, ‘We don’t run away from cats.’ It’s definitely a cat with a s–t attitude.”

Here’s a video of Hartman explaining her woes:

And here’s an adorable one-minute video of a cat apparently realizing that its staff is pregnant. This has gotten over seven million views since it was posted on March 2 of this year!

12 thoughts on “Caturday felids: A Japanese meal for cats, a really nasty moggy, and a cat realizes its owner is pregnant”