This instance of free-speech suppression has a twist, as the victim is an endowed professor of gender and women’s studies at a public university. She’s Donna M. Hughes, who holds the Eleanor M. and Oscar M. Endowed Chair of Gender and Women’s studies at the University of Rhode Island (URI).  She’s known for her work on human trafficking and sex work, but has now ventured into the minefield of transgender analysis. As Inside Higher Ed (IHE) reports, her university has, while grudgingly affirming her freedom of speech (always guaranteed at state schools), nevertheless done everything it can to demonize her and distance itself from her. Why? Because she feels—as do I—that there are some limits to the rights and privileges of transgender women considered as “women”. That makes Hughes, of course, a “transphobe”.

Click the screenshot to read the piece by Coleen Flaherty.

Hughes was somewhat out of mainstream feminist ideology when she wrote in the past that “there’s a fine line between sex work and sex trafficking and that legalizing prostitution helps only pimps and johns, not sex workers.” But that didn’t get her in nearly as much trouble as her February essay in 4W (a “fourth wave feminist” site), in which she not only called out QAnon, but made an analogy with that group and some of the proponents of the “transsexual women are fully women” view:

The political left is quick to denounce the campaign of disinformation that led to the Capitol riot on January 6. But fake news and harmful politicized beliefs leading to real harm are not solely a right-wing phenomenon. The American political left is increasingly diving headfirst into their own world of lies and fantasy and, unlike in the imaginary world of QAnon, real children are becoming actual victims.

The trans-sex fantasy, the belief that a person can change his or her sex, either from male to female or from female to male, is spreading largely unquestioned among the political left.

The trans-sex fantasy returns us to the question: “What is a woman?”. . .

. . .The trans-sex/“gender identity” ideology challenges same-sex rights, particularly those of women and girls. Interestingly, men and boys have had no attack on their rights. The biological category of sex, particularly women’s sex, is being smashed. Women and girls are expected to give up their places of privacy such as restrooms, locker rooms, and even prison cells. When biological males identify as trans-women, they can compete in women’s and girls’ sports. There are now cases of women being injured, some severely, by biologically larger and stronger biological men competing as “transwomen.” In the most well-known case in 2014, a transgender competitor broke the skull (linked video is graphic) of a female during a mixed martial arts (MMA) competition. In Fall 2020, World Rugby banned the participation of transwomen (biological males) in rugby citing the high risk of injury. Even Title IX, which granted women equal access to educational opportunities, such as those provided by sports and scholarships, are being taken away. It used to be when someone took unfair advantage, we’d call it cheating, but that is no longer recognized in this fantasy world.

The dystopian trans-sex/“gender identity” world claims that female mammalian characteristics should be redefined and disappeared from the female body to satisfy the feelings of biological males who identify as women. Basic biological words like breast and vagina are replaced by misogynistic, trans-sex/trans-gender language so that a female has a “front hole” instead of a vagina; females “chest feed” instead of breastfeed. All references to women disappear into terms such: “people who menstruate,” “people with uteruses,” “a pregnant person,” or “a birthing parent.” No such changes in terms are proposed for men’s bodies and anatomy. These redefinitions are hatred targeted at women’s bodies and their rights.

Strong stuff, but not irrational or hateful stuff. Nevertheless, that can’t be allowed to stand in a liberal university! And so, as IHE reports, the University of Rhode Island has issued the usual statement that criticizes the views of a faculty member while at the same time saying that it “honors and respects” her right of freedom of speech. That’s a form of hypocrisy. A good free-speech university, like the University of Chicago is at present, affirms that it will make no official statement supporting political, ideological, or moral views, and in response to the mob that’s descending on Hughes, would have said something like “Professor Hughes has the right to say whatever she wants, and the University supports that right.”

But URI has to flaunt its virtue, and so issued the statement below: 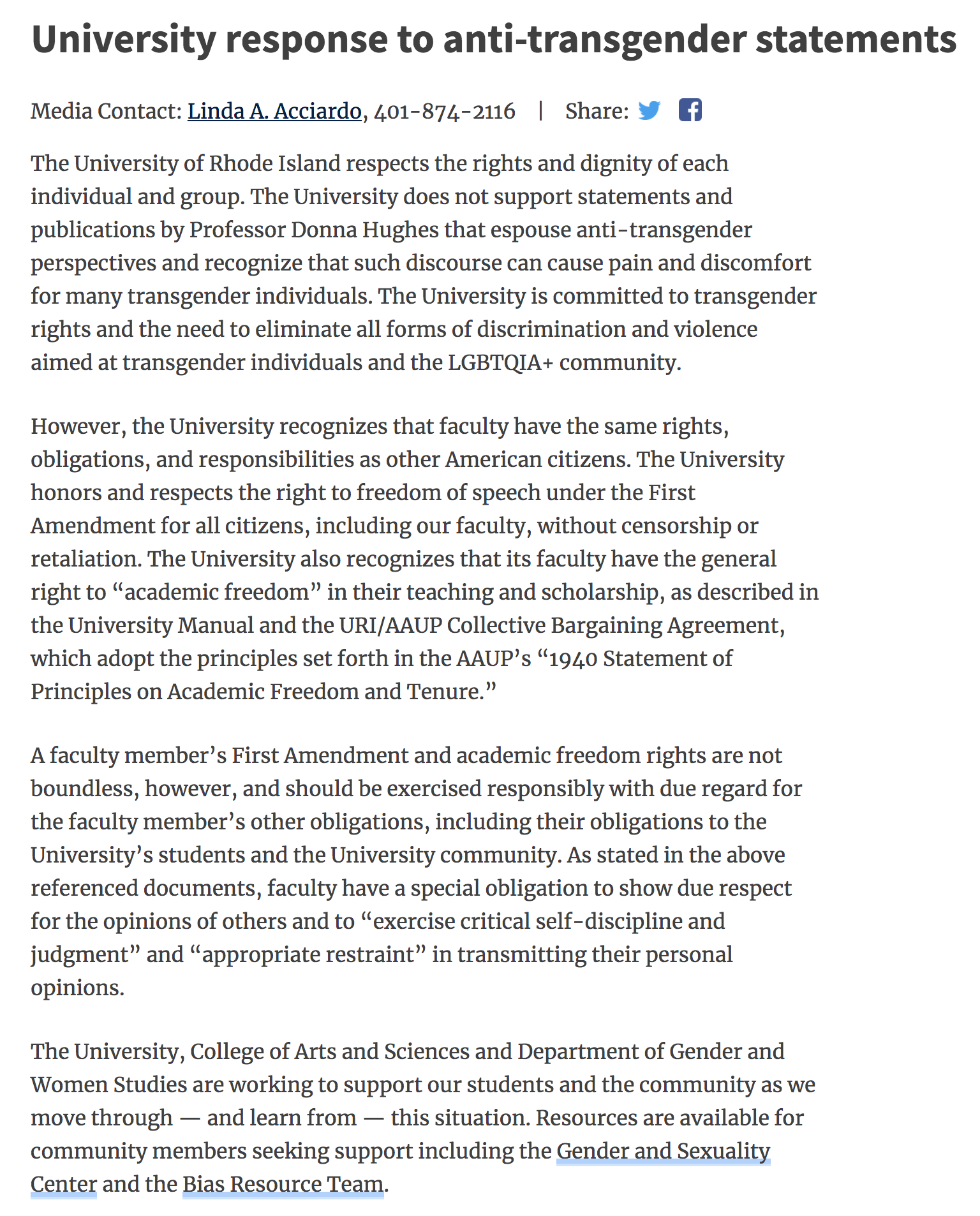 I find this statement weaselly to the extreme. While it’s entirely proper for the URI to have a page of resources and policies for supporting transgender students, faculty, or staff, it should not issue statements criticizing individual faculty members’ political views. (They even name Hughes!). What that does, as Hughes claims in the article, is to chill the speech of those who hold similar views, and it’s not at all “transphobic” to want a rational discussion about the extent to which transgender women (or men) are identical to biological women (or men). In other words, URI’s statement acts to squelch the speech of others—and they are many—who want a public discussion of the issue, and a discussion without being demonized as a “transphobe.”  This is why the University of Chicago enshrined in the Kalven Report the principle of not officially endorsing political/ideological/moral views. (Faculty members and others, of course, are free to issue their own personal statements on the issue.) Imagine how brave you’d have to be to risk being named as a public enemy by your own university!

It’s no wonder that Hughes takes this as an affront. It’s a blatant attempt to stifle the speech of URI members who have views different from those of extreme pro-trans-rights people.  The statement below says, in effect, that “Hughes can say what she wants, but she really shouldn’t have said this stuff”:

A faculty member’s First Amendment and academic freedom rights are not boundless, however, and should be exercised responsibly with due regard for the faculty member’s other obligations, including their obligations to the University’s students and the University community. As stated in the above referenced documents, faculty have a special obligation to show due respect for the opinions of others and to “exercise critical self-discipline and judgment” and “appropriate restraint” in transmitting their personal opinions.

In other words, her own University is calling Hughes irresponsible and disrespectful of the opinions of others, lacking “critical self-discipline and judgment” and “appropriate restraint”. If that’s not an attempt to stifle speech that’s not ideologically approved, I don’t know what is.

I could go on, but you can read the articles for yourself. Let me just add that Hughes has a lawyer, which means that a free-speech/academic freedom lawsuit may be in the offing. While the University may have had the right to publicly criticize Hughes’s views, and even name her, any respectable institution wouldn’t have done that, nor implied in the statement that there are limitations to freedom of speech and academic freedom. I have no respect for what URI has done to Hughes.

And here’s a statement she gave to IHE:

Via email, Hughes said it’s “just sad that we have reached a point in society where difficult issues cannot be freely and openly discussed without resort to personal attacks and calls for censorship.”

The marketplace of ideas, she added, “has broken down and increasingly, university faculty are terrified to speak out on a wide range of important issues for fear that — as seems to be happening here — they will draw criticism from their students and their institution will throw them under the bus.”

Bingo. No academic institution should make its members afraid to express views on political issues, nor try to enforce a political orthodoxy, no matter what it is. They can affirm that they won’t discriminate against various targeted groups (after all, that creates a climate for free discussion), but that’s as far as it should go.