In my darker hours I tend to think that Wokeness is a one-way ratchet, as I see nothing that would reverse the trend. Woke teachers in colleges turn students into woke young people, who then go into their jobs and wokeify corporations and media, as well as into academic where they train yet another generation of performative authoritarians.  Still, one could have said the same thing about religiosity a few centuries ago. Nevertheless, I don’t have a few centuries to see if Wokeness diminishes. What heartens me is when people I respect oppose Wokeness, especially when they’re liberals and are in favor of eliminating bigotry and racism—but not in a useless and performative way. Here we have a bunch of African-Americans speaking out about the Wokeness that permeates Smith College like mites permeate our eyelashes.

Glenn Loury issued this tweet, which then led me to the yahoo!news article (reprinted from The National Review) and then to the letter to Smith College from a group of African-American notables.

The original article (link above) reports that more than 40 (it’s actually 43) African-American intellectuals (well, some are preachers, others CEO, but all qualify as “notables), wrote a letter to Smith College decrying its treatment of “service workers” (cafeteria employees and security people) after a black student, Oumou Kanoute, reported in 2018 that she was racially profiled while lying on a couch in an unoccupied dorm.  It turned out that Kanoute was reported to security simply because that had asked to be notified if anybody was seen in the dorm, and race wasn’t an issue. Several investigations, including one by Smith college itself, concluded that this was not a racist incident.

Despite that, several Smith employees involved in the bogus “profiling” were fired or forced out, and the odious President of Smith, Kathleen McCartney, has never apologized for that treatment. I reported on this incident several times (see here, for example), and it’s what initiated the toxic climate at Smith that includes mandatory diversity training and, according to Jodi Shaw, harassment of students who were white.

More than 40 African American intellectuals are asking Smith College to end the “forced, accusatory ‘anti-bias’ training” that was mandated for campus service workers after a student falsely accused some workers of racially-profiling her.

The letter, obtained by National Review, was sent on Monday to Smith College president Kathleen McCartney by Bob Woodson, a veteran of the Civil Rights Movement and founder of “1776 Unites,” and 44 fellow black intellectuals. The signatories ask McCartney to “rethink how you have handled” the fallout over an alleged incident of racial profiling in the summer of 2018, and urge her to “publicly apologize” and “compensate” the school’s service workers that were caught up in the firestorm.

As detailed by the New York Times, a Smith student accused a janitor and a police officer of questioning “my being at Smith, and my existence overall as a woman of color” after the service workers asked her why she was eating lunch in a closed dormitory lounge. McCartney immediately sided with the student, who drew national attention and backing from the ACLU, as she held up the incident as an example of an oppressive campus environment.

. . . Despite a subsequent investigation by an outside law firm revealing no persuasive evidence of bias, McCartney responded by arguing that “it is impossible to rule out the potential role of implicit racial bias,” and subsequently implemented mandatory anti-bias training for campus staff. The move has led to public blowback, including from a former staffer and Smith alum who recently resigned over the treatment.

That “former staffer and Smith alum” was, of course, Jodi Shaw, whose GoFundMe campaign for her own expenses as well as a lawsuit against Smith, is now at nearly $300,000—double her original request.

You can see the pdf of the letter here, and read about the 1777 Unites website here. Among the signers of the letter—I’ve reproduced just the first page below—are Glenn Loury, Shelby Steele, John McWhorter, and Clarence Page. It appears to be a consortium of influential African-Americans who are opposed to the machinations of the elect, to Wokeism, and to Critical Race Theory. What I like about the letter is that it’s pushback against the madness and, especially, that it stands up for those who were really marginalized in this case: the Smith College employees who were victims of the entitled administration and students who have made their College a place to avoid.

I especially like this bit, which I’m betting was written by Loury:

Imagine an institution that responded to an allegation of theft by a Black employee by searching the pockets of all its Black employees before they left the workplace. Then after an investigation showed that the employee in question had not actually stolen anything, the institution only increased the frequency and invasiveness of the searches. Such treatment would rightly be condemned as racist. Yet that is exactly what Smith College has done to its service workers. 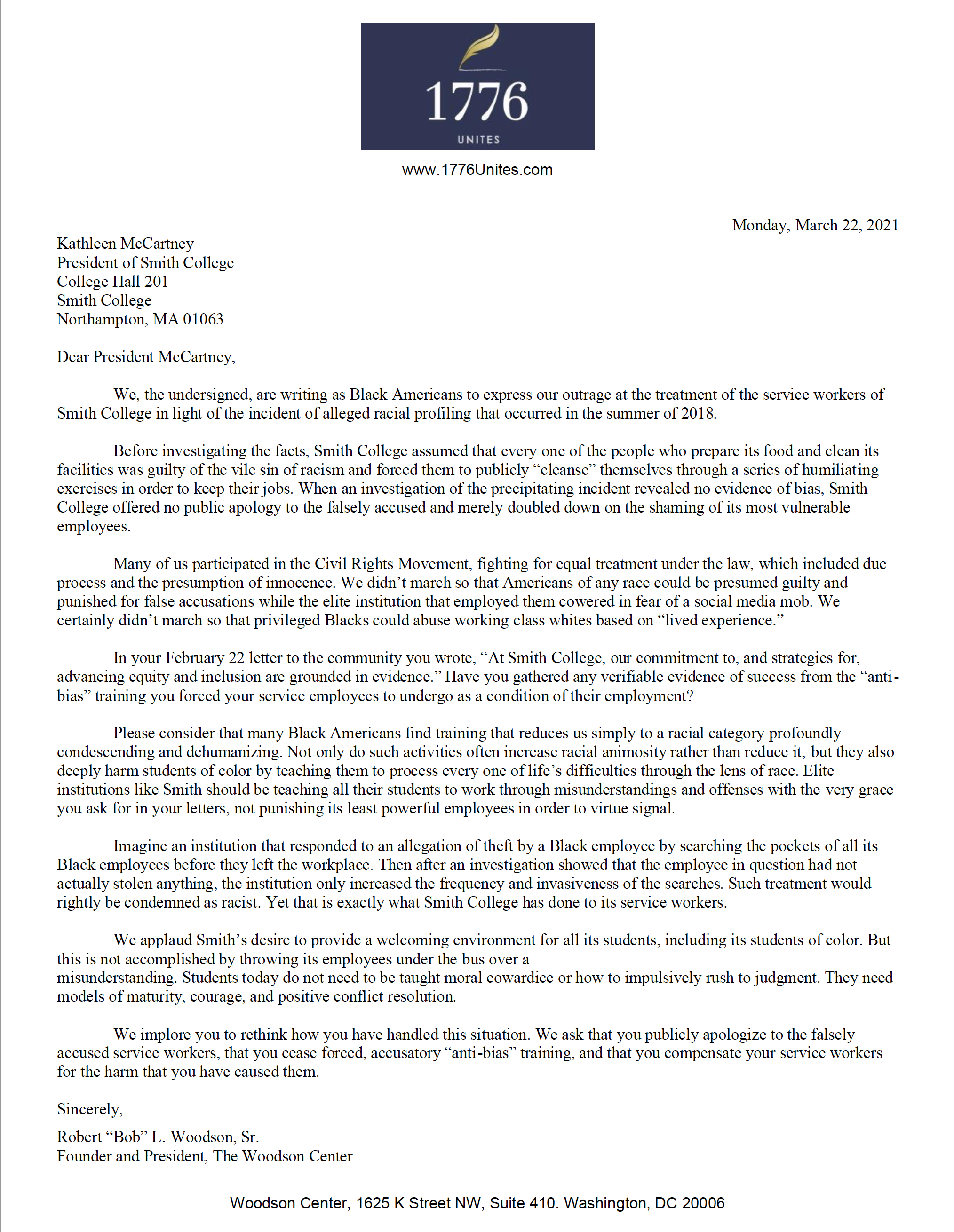