When I write about gun control, I know that I’ll get substantial pushback on either this site or on email. Americans love their guns, and can give many reasons why they should have them (including  semiautomatic weapons).

These reasons include the Second Amendment, which has, in my view, been misinterpreted by the courts to allow nearly anyone to have guns, handguns, assault rifles, and the ability to open carry. All that to ensure “a well regulated militia”!  But we no longer have militias!

I’ve always advocated for strict gun control—along the lines of Britain or even Scotland—as a way to reduce homicides in the U.S. The counterarguments I hear include the famous mantra “when guns are outlawed, only outlaws will have guns: the idea that making guns harder to buy will ensure that only criminals will have guns. But there are a slew of other arguments for why loose gun control in America isn’t responsible for mass shootings, some of them addressed in the NYT column below. These include the claim that the U.S. is an especially violent nation, is full of mentally ill people who commit mass shootings, have racial divisions that exacerbate homicides, and so on. Those arguments now appear to hold no water.

We already know that private ownership of guns causes the deaths of far more innocent people than of home invaders or other miscreants. We also know that the U.S. leads the world in per capita gun ownership (see below), with nearly as many guns (270 million) as people (328 million, but that includes kids and the aged).

The column below (click on screenshot) attacks the notion that the ease of gun ownership in the U.S. has nothing to do with the huge number of mass shootings. And it dispels the claims that other peculiarities of American culture are the real reason for mass shootings. 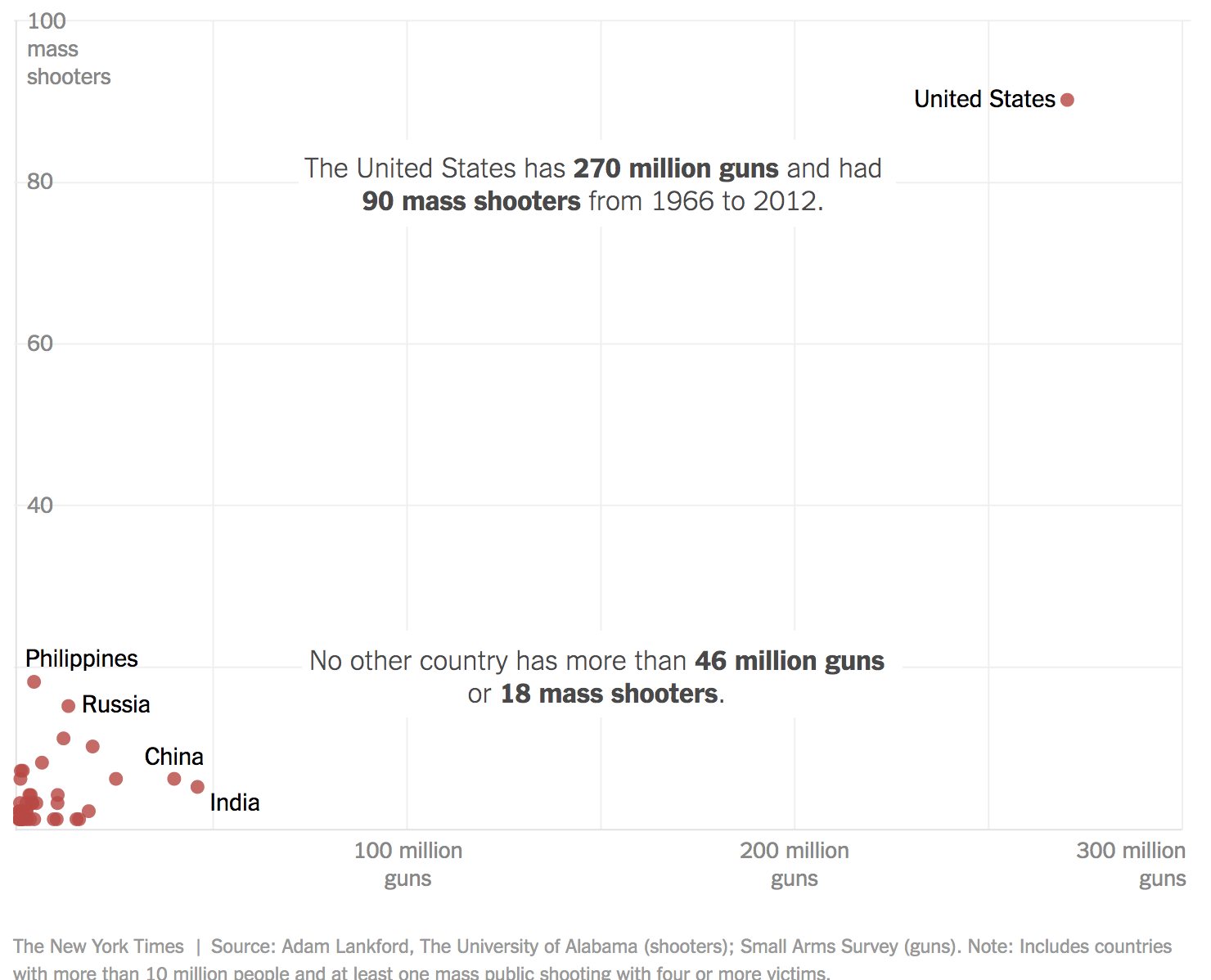 Below: the correlation between per capita gun ownership and per capita number of mass shooters. Now if you remove Yemen (which has even more mass shootings per capita) as well as the U.S., there might not be a statistical correlation, but the analysis in the article apparently shows that there is, and it isn’t due to complicating factors like an American “culture of violence”. 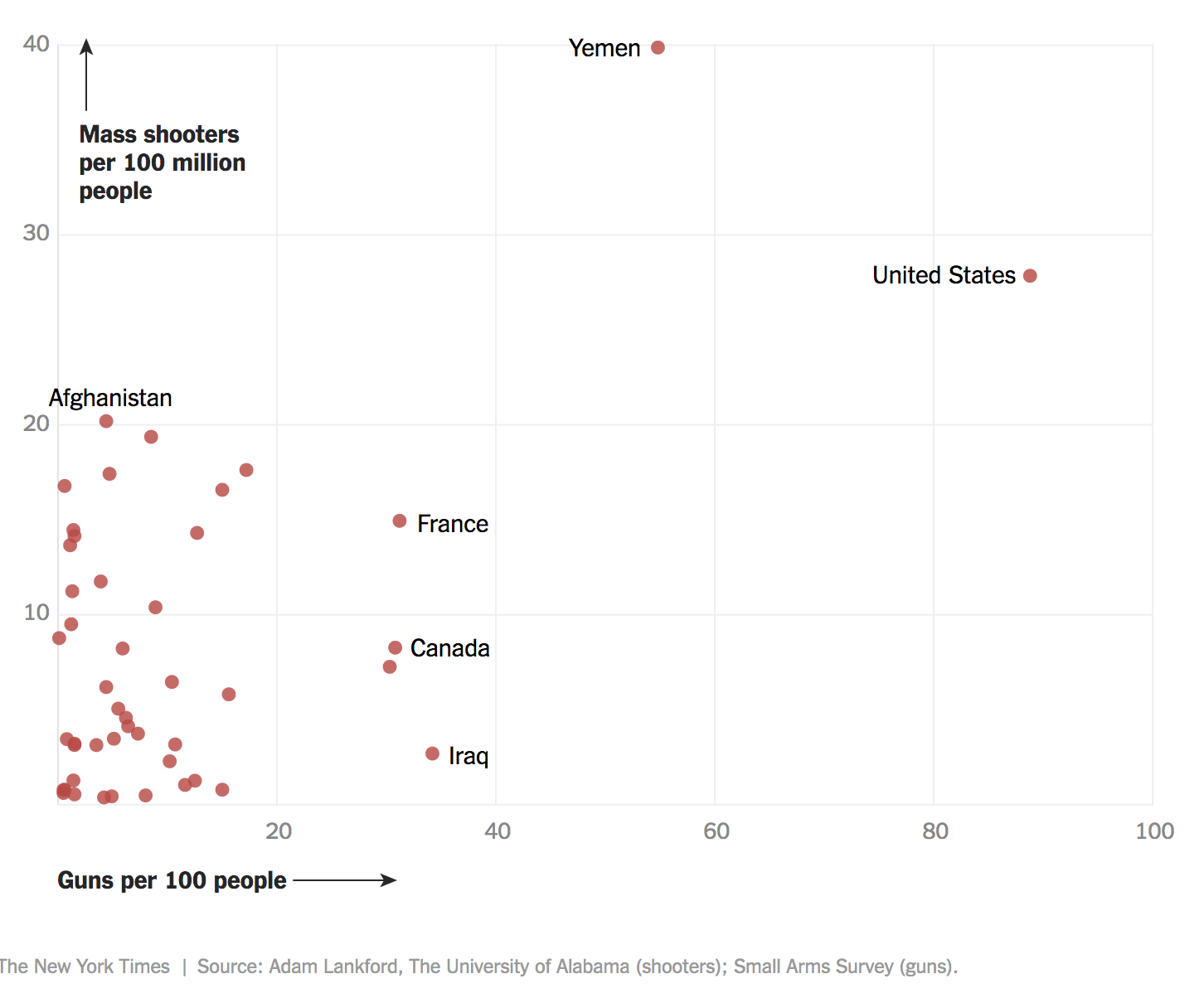 Here are some data and citations from the article (quotes are indented). You can check the sources for yourself; I haven’t read them.

Americans make up about 4.4 percent of the global population but own 42 percent of the world’s guns. From 1966 to 2012, 31 percent of the gunmen in mass shootings worldwide were American, according to a 2015 study by Adam Lankford, a professor at the University of Alabama.

. . . Worldwide, Mr. Lankford found, a country’s rate of gun ownership correlated with the odds it would experience a mass shooting. This relationship held even when he excluded the United States, indicating that it could not be explained by some other factor particular to his home country. And it held when he controlled for homicide rates, suggesting that mass shootings were better explained by a society’s access to guns than by its baseline level of violence.

. . . More gun ownership corresponds with more gun murders across virtually every axis: among developed countries, among American states, among American towns and cities and when controlling for crime rates. And gun control legislation tends to reduce gun murders, according to a recent analysis of 130 studies from 10 countries.

Other factors that didn’t correlate with mass homicides included suicide rates (well, there are fewer mass shootings in countries with higher suicide rate), playing video games, racial diversity, general amount of criminal behavior (though American crime is “simply more lethal” than that in other developed countries), or mental health issues.

And here’s a comparison with China, suggesting that the lethality of weapons makes a difference in the homicide rate, at least in this case:

In China, about a dozen seemingly random attacks on schoolchildren killed 25 people between 2010 and 2012. Most used knives; none used a gun.

By contrast, in this same window, the United States experienced five of its deadliest mass shootings, which killed 78 people. Scaled by population, the American attacks were 12 times as deadly.

The authors of the NYT piece,, Max Fisher and Josh Keller, note that even in countries with high gun ownership, like Switzerland—second only to the U.S. among in gun ownership among developed countries—which has a higher than average rate of homicides, it’s still only a fraction of the U.S. rate (in Switzerland it’s 7.7 per million people; in the U.S. it’s 33). The authors add at the end that “The United States is only one of three countries, along with Mexico and Guatemala, that begin with. . . . the assumption that people have an inherent right to own guns.”  That’s again pretty scary for us, but many Americans cling to the wonky interpretation of the Second Amendment.  It would be nice if the courts interpreted the amendment as I believe (as do others) it was intended.

According to this article, if you want reduce mass homicides in America, regulate our guns. There’s no sign that pervasive gun ownerships keeps America (or gun owners) safer, and lots of people get killed as a byproduct of “legal” gun ownership (viz., children, domestic disputes, and, of course, the mass killers). Reports of mass killings seem to be almost a monthly event now. Most Americans want stricter controls on guns. It’s only the NRA and the Republican Party that are preventing enacting the will of the people.

The article ends with a sad prognostication:

“In retrospect Sandy Hook marked the end of the US gun control debate,” Dan Hodges, a British journalist, wrote in a post on Twitter two years ago, referring to the 2012 attack that killed 20 young students at an elementary school in Connecticut. “Once America decided killing children was bearable, it was over.”

It should not be bearable. When I was a kid, we had “nuclear attack drills”, when we would pretend the Russians were bombing us and we’d hide under our desks. Those days are gone; now they have “mass shooter drills.”